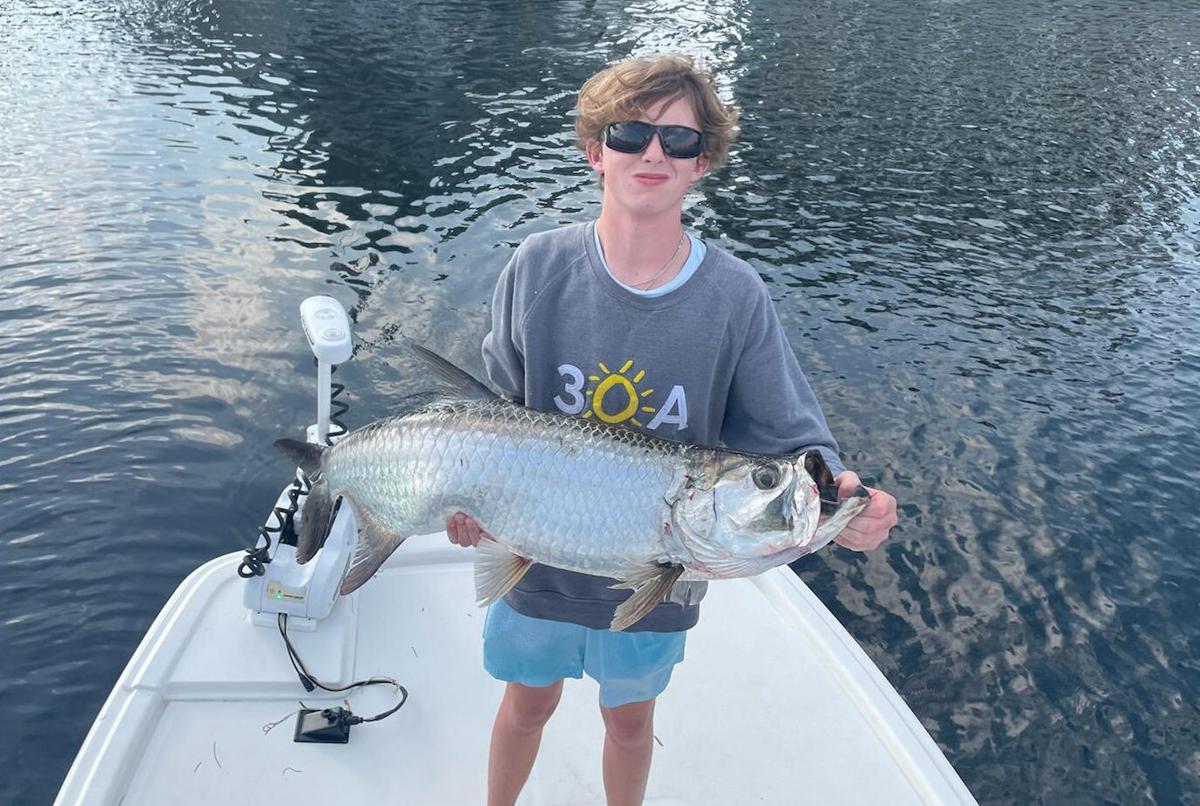 Zack Roxby shows off a nice juvenile tarpon taken out of a Gulf Harbors canal. The last couple of weeks have seen several catches of small tarpon there. 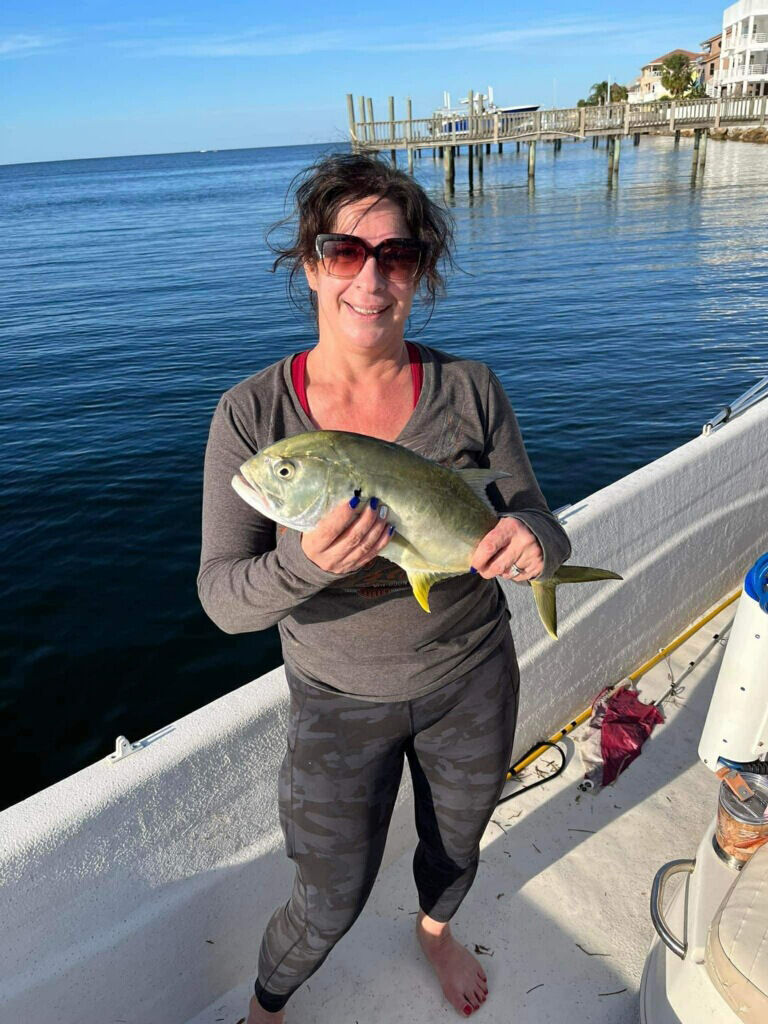 Darlene Medina holds a junky jack. Bill at the Rusty Bucket reports schools of jacks between 5 and 7 pounds have been common along the Pasco County coast. 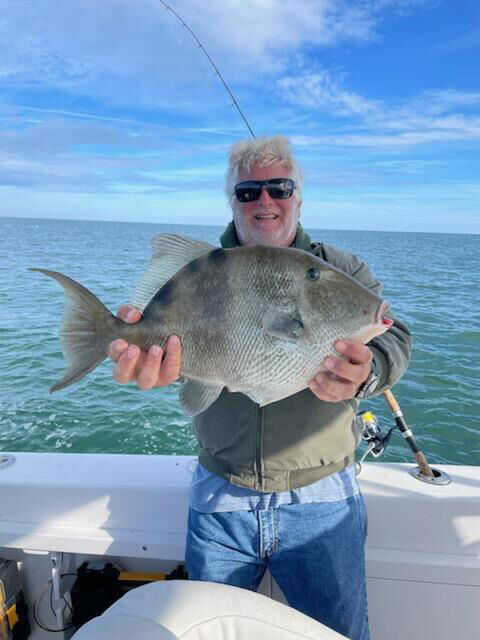 An angler fishing with Capt. Mike Senker displays an unusually large triggerfish taken while fishing in 60 feet of water.

Capt. Mike Manning (727) 243-8918: Capt. Mike says he’s been finding a good number of larger trout working around the spoil islands of St. Joseph Sound. Drifting and jigging or using live shrimp is producing plenty of fish 18 to 20 inches, along with a few oversized trout. A lot of the fish are in the deeper potholes. Snook and reds are on outside points all along the coast, as the still warm Gulf means there’s no need for them to retreat to their usual warmer haunts in the backwaters. The pompano normally inside the Anclote power plant outfall canal have ventured out on the flats off the plant, where there also are some trout.

Capt. Mike Senker (352) 584-6297: Capt. Mike reports some good fishing offshore. His anglers fished 35 and 40 feet of water and limited on mangrove snapper 14 to 20 inches long. He uses live shrimp on a Spro live bait hook. Fishing out in the 60-foot depths as the cold front approached last week produced 62 gag grouper and big triggerfish. Gags went out of season Jan. 1, so they all went back. They also landed three red grouper, though all were short of the legal minimum size. Capt. Mike reports the water is a little murky offshore, with a lot of suspended particulate.

Tarpon Trading Company (727) 937-1488: Larry reports his anglers have been finding some decent action on silver trout around Three Rooker Bar south of Anclote Key. They also are connecting with them fishing the east side of the channel in St. Joseph Sound. Shrimp is the best bait. A few silvers are being taken in deep water off the north end of Anclote Key, and those fishing before daylight in the Anclote power plant outfall canal are doing well on spotted sea trout. After the sun is up the jacks move in. One angler fishing there landed a massive 25-inch bluefish, an unusually large one for this area. There are a few trout being taken off the Fred Howard Park causeway, as well as some sheepshead under the bridges there.

One Stop Bait and Tackle (727) 842-5610: Joe says there are plenty of trout and good numbers of reds around. Fish are spread out from Honeymoon Island north to Hudson. They are working up close to mangroves and flooded rocks and over oyster beds when the water is high. Areas near creek mouths seem to be best. A few cobia have been taken on the flats off the Anclote power plant outfall canal. The pompano and permit bite has been slow for those fishing from shore or the pier at the park there.

The Rusty Bucket (727) 645-6598: Bill reports good numbers of reds are being taken north and south of the Cotee River on cut bait, crabs and shrimp. Thanks to warm water this year, schools of sardines are on the flats off the Anclote power plant and anglers are using them to take some snook, which are on the outside shorelines and points. Lots of big jacks are schooling with fish to 7 pounds common, along with a few larger. The canals at Gulf Harbors have been producing some small tarpon.

Armed Anglers (727) 945-1808: Capt. Griff says offshore anglers have been concentrating on hogfish and sea bass since gag grouper season closed. They’ve also scored some cobia on the artificial reefs. Inshore, the pompano bite slowed at the Anclote power plant outfall, though some trout are being landed, along with some sharks at night. A number of reds were landed by anglers working the channel spoils at both ends of Gulf Harbors.

Cooper's Shrimp Shack (727) 868-8736: Bill reports Hudson anglers are getting some reds and sheepshead in residential canals using shrimp. A few are finding some black drum in canals, with one angler bagging a couple of fish along with a pair of reds. Early last week anglers found schooling mackerel on the deep flats off Hudson. Offshore anglers are reporting hogfish on offshore rocks.

Dixie Lee Bait (352) 596-5151: Mark says inshore anglers over the last week have been slamming the trout on the grass flats along Hernando’s coast. Most of the better catches were made in 2 to 4 feet of water. Plastic flukes have been a good bait among artificials, with live shrimp or pinfish under a cork good choices among live bait. Reds have been around in good numbers, with fish moving up over rocks and oyster bars with the rising tide. They’ll take gold spoons, live shrimp, pinfish or cut bait. The unseasonably warm Gulf waters mean there are good numbers of snook on the outside points, in channels and around creek mouths. Several anglers reported tangling with them recently. Offshore anglers who frequent the shop continue to report kingfish catches. By January, the fish have usually passed by on their trek to warmer southern waters, but this year the warmer than usual Gulf has sustained the baitfish schools offshore that kings feed on. Most have been chumming the kings in, but others have been covering more water by trolling spoons and plugs at around 7 knots. Most of the action has been between 30 and 50 feet of water.

Bait & Tackle of Hernando Beach (352) 610-4315: Sven reports a pretty good redfish bite. Anglers fishing rocky points, oyster bars and mangroves are taking some nice fish on live and artificial baits. Jenkins Creek fishing pier has been seeing some decent action of late. Anglers fishing early in the day have been taking some redfish and a few black drum and mangrove snapper. Trout have been landed there, as well, with live shrimp under a float later in the day the pattern that’s working. The bridges in Aripeka have been giving up some small mangrove snapper and sheepshead to anglers using live and frozen shrimp. A few pompano have been showing up on the flats off Hernando. Jigs fished around spotty grass and sand bottom are the most effective method of taking them. Offshore anglers have been doing well on mangrove snapper and a few hogfish in 15 to 35 feet of water. The bigger sheepshead are starting to congregate around rocks and structure in preparation for the spawn. Anglers are finding them on rocky bottom in 12 to 15 feet of water. Fishing over the weekend 100 miles out in 150 to 200 feet of water, Sven reports the boat did well on red grouper.

Mary's Fish Camp (352) 597-3474: Bell says the mullet fishing at the fish camp has been lackluster over the past week. A few cool nights pushed a few more mullet up to the camp but she thinks the unusually warm winter we’re having is in general making for a slower action. A couple of anglers landed redfish behind the camp store. Live or frozen shrimp is what usually takes them.