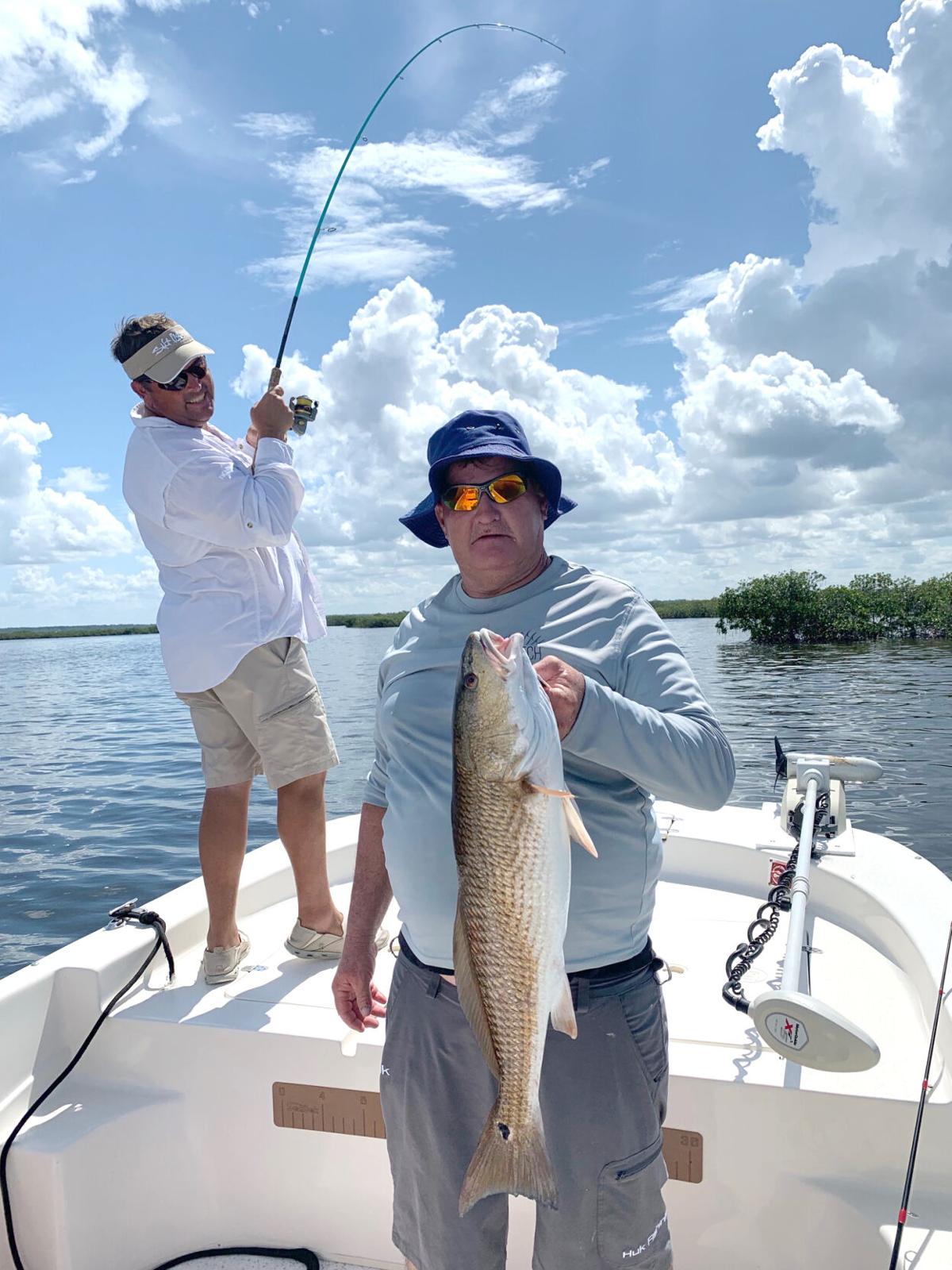 The redfish bite is on in Hernando’s waters. Here an angler shows off a nice fish while his fishing partner works on landing another. The fish are schooling in pods up to a dozen fish, and many of them are upper-slot or oversized fish. Live pinfish have been working best.

The Florida Fish and Wildlife Conservation Commission took samples from 11 locations in Hernando County waters Aug. 12. All but two showed no signs of red tide. The two samples that were positive showed low or very low concentrations of the bloom. Both were about 20 miles west of the Pine Island area.

The offshore patches of red tide have been reported by some anglers, who say they are traveling through it on their way to deeper, clean water to do their fishing. The absence of red tide in the shallower samplings is good news for inshore anglers and scalloping.

Capt. Josh Fritz (352) 345-9304: Capt. Josh reports the redfish bite doesn’t get much better than now. Most of the schools he’s finding from Hudson to Pine Island are no more than a dozen fish, but many of these pods are of fish in the upper-slot size range or oversized. Live sardines are usually the top fish-getters, but the reds are snapping up live pinfish better. The fish are on the move, so working shallow, rocky shorelines is the ticket. A few snook are being found in the process. Trout fishing remains mysteriously so-so. Typically the bigger fish are over grass bottom in 10 to 14 feet of water in August, but the numbers of fish caught has been well below usual. Josh put his anglers on three nice trout fishing the channel at Hernando Beach recently. He notes that the water is still tea-stained from all the rain and he suspects the amount of fresh water in the Gulf could be the problem, as trout need higher salinity levels than reds or snook. We have excellent tides running into next week, so look for some good inshore action.

Capt. Mike Manning (727) 243-8918: Capt. Mike says he has found some decent fishing even though he’s been dodging rain. Fishing in the rain on a recent trip, his anglers bagged a few nice reds, some trout and snook. Most of the reds were taken around Westport and Salt Springs just north of the Cotee River. They also got their trout there. Working the sandbar north of Anclote Key produced 8 or 9 snook to 30 inches. Live sardines were working well. The water has cooled down due to recent rain, which is making the fish a bit more active.

Daddy D's Bayport Bait (352) 556-2163: Dustin says his anglers are reporting very good redfish action up and down the Hernando coast. Many of the fish being caught are oversized. Fish are bunched up in small schools and working over flooded rocks and oyster bars when the tide is up. Live shrimp and pinfish have been top baits. Lots of reds have been reported by anglers fishing from the Jenkins Creek pier, though most have been undersized rat-reds.

Dixie Lee Bait (352) 596-5151: Eric reports he’s hearing many reports of excellent redfish action. Anglers are working rocky shores, bars and creek mouths up and down the coast for upper-slot and oversized fish. Fish have been schooling, so it’s not unusual for anglers to land several once a school is found. Live shrimp and pinfish work, but many are reporting doing well with chunks of dead bait. Fresh pieces of mullet, pinfish and ladyfish all work. Snook are being found in many of the same spots the reds are working. While they will take dead baits, live shrimp, pinfish or sardines are better choices among natural baits. Trout fishing continues to be relatively slow, with most reporting having difficulty finding more than a fish or two.

Mary's Fish Camp (352) 597-3474: Bell says anglers have been doing well hook-and-line fishing for mullet behind the camp store. The fish are schooling around the seawall in good numbers, responding to chum. The technique is a bit specialized, but everything needed is available in the store, including some pointers. A few mangrove snapper are hanging around the seawall and one angler landed a 7-pound sheepshead. Shrimp is the best bait for snapper and sheepshead.

One Stop Bait and Tackle (727) 842-5610: Marcus reports anglers are picking up some snook in the surf at Anclote Key and there have been plenty of reds on the shallow flats around flood rock and oyster bars from the Anclote River north to the Cotee River. Trout fishing on the shallow grass has been best early and the fish are scattered, so keep moving to find them. Sheepshead are in the canals and creeks, and some have been running large. Live fiddler crabs have been added to the selection of baits available at the shop to accommodate sheepshead anglers.

J&J Bait and Tackle II (727) 940-7928: James says it’s been a slow week at the shop, with few anglers taking to the water. Those working the shallow rocks and spoils outside the Anclote River are taking some reds. The snook remain on the beach at Anclote Key deeper grass flats are where the trout are hanging out, as the water is cleaner and saltier.

Tarpon Trading Company (727) 937-1488: Larry says there hasn’t been much fishing news coming in. The bite along the Fred Howard Park Causeway remains good, with a mix of trout, reds and snook around the bridges. Word is the water on the backside of Anclote Key is clean and clear. Snook are on the beach at the island. Boaters have reported encountering dead fish floating about 5 miles west of Anclote Key.

The Tackle Box (727) 819-3783: Capt. Buck says the redfish are the best thing going inshore. The fish are coming out of the backwaters and working the mangrove shorelines, oyster bars, spoils and rocks. They tend to school more this time of the year, so look for the push of disturbed water. If it isn’t mullet, it’s likely redfish. A lot of the reds being taken now are oversized fish. Offshore, Capt. Mike Teegarden reports running into patches of dead fish, though the bottom fishing has been good. He suspects the fish have washed into the area from red tide affected areas to the south.

The Rusty Bucket (727) 645-6598: Bill reports his anglers are finding some great mangrove snapper fishing. Working canals, creeks and docks, they have landed fish up to 18 inches. Live and frozen shrimp has been working. The bigger fish are post-spawning snapper coming in from offshore. He suspects the bite on big snapper will continue for at least another month or so. Sheepshead are being taken along with them. Redfish action has been solid on the flats, and trout fishing has been decent on the incoming tides northwest of the Cotee River. The incoming tide brings clean, salty water from offshore, but on the outgoing tide the bite slows. Anglers fishing offshore are reporting cobia and yellow-tail snapper. The key is getting out beyond 12 miles to cleaner, cooler water.