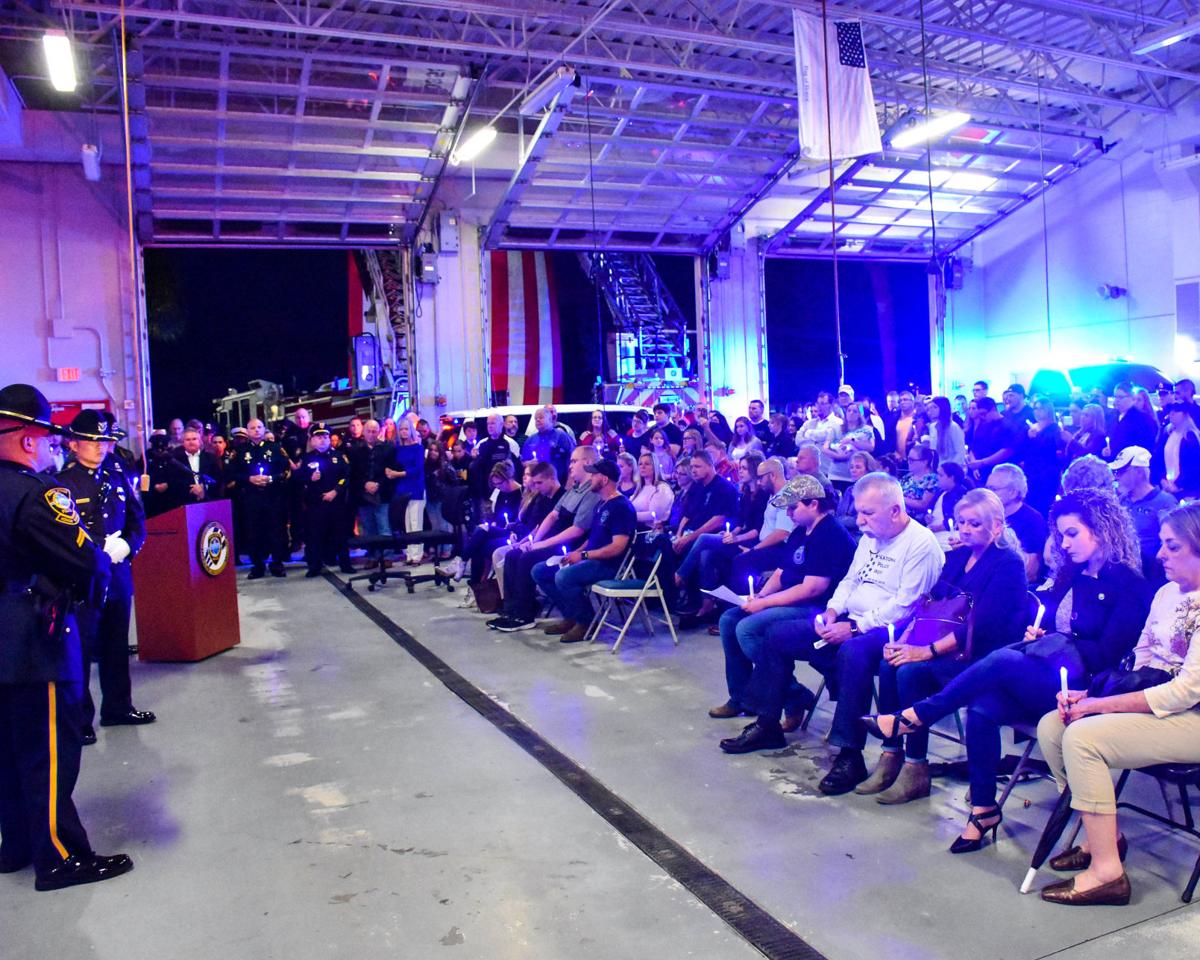 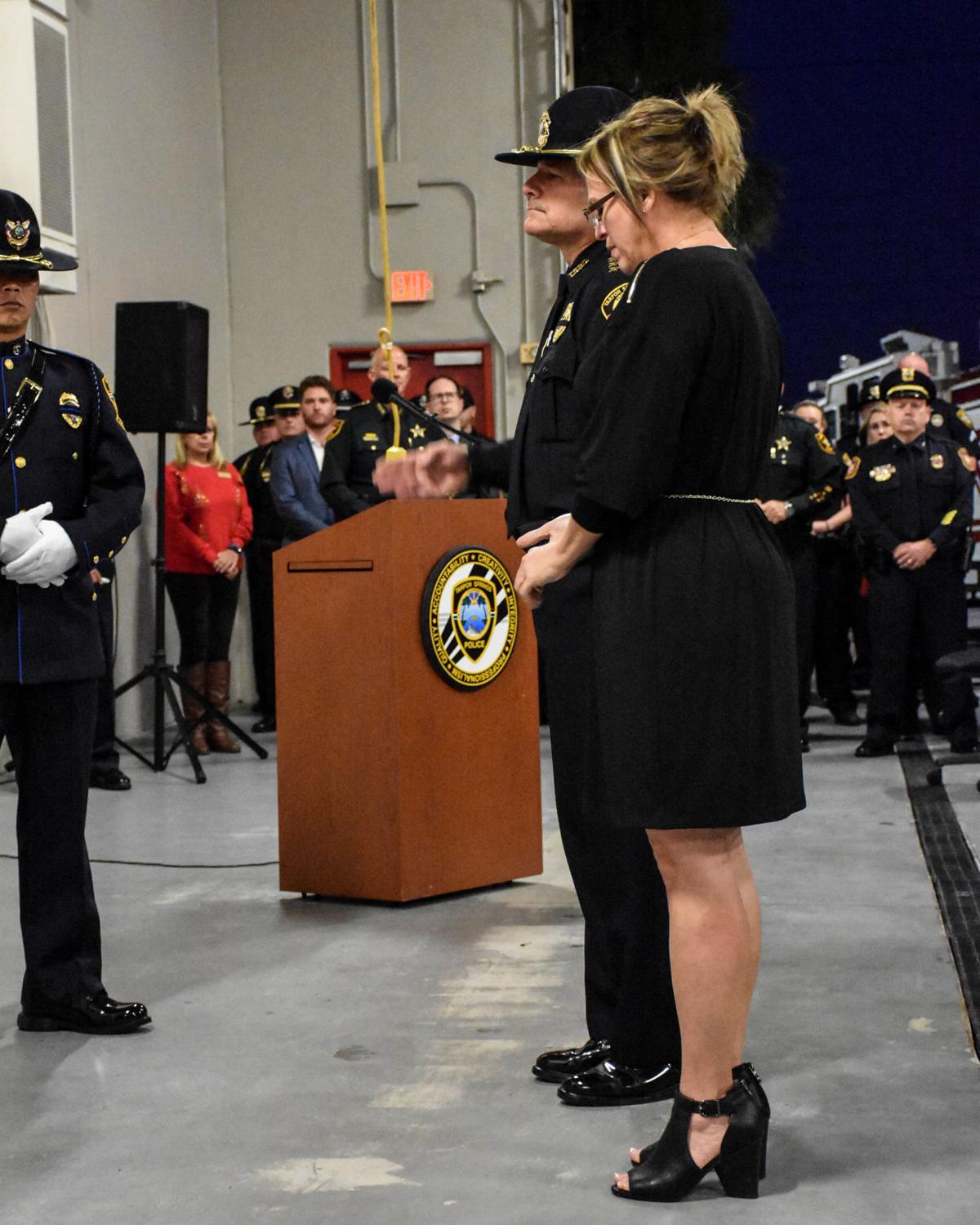 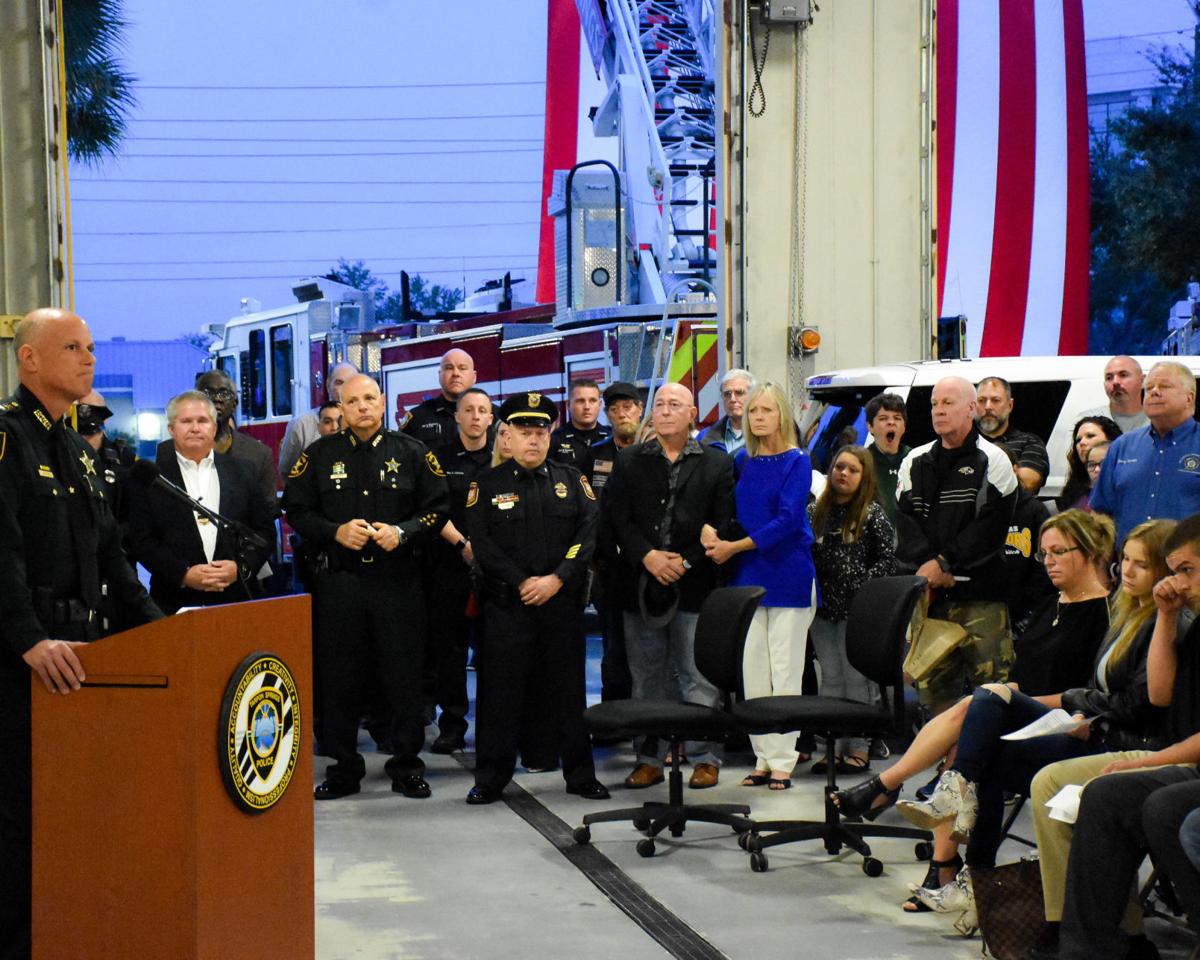 But despite the rare December rainstorm and the fact that it was the final Saturday before Christmas, the vehicle bay of the city’s Public Safety building was packed with friends and family, first responders and residents from all over the Tampa Bay area who came to honor the man they still call ‘Charlie K.’

Kondek, who was killed in the line of duty in downtown Tarpon Springs in 2014, was beloved and respected by his fellow officers as well as other members of law enforcement, and that respect was evident in the words of those who spoke at the service, including Chief Robert Kochen and Maj. Jeff Young of the Police Department, City Commissioner Townsend Tarapani and Pinellas Sheriff Bob Gualtieri.

“It’s hard to believe it’s been five years,” Young said in his opening remarks. “Five years and 1,825 days since Charlie K. was killed, and not a single day went by where we didn’t think of Charlie.”

The theme of remembrance was a common one, as each speaker shared their thoughts about the kind of husband, father and policeman Kondek was, a man who adored his wife, Teresa, and their five children as well as his colleagues and the residents of the community he served.

“Five years ago, Charlie K. gave his life in the service of others, paying the ultimate sacrifice,” Kochen said, adding, “It seems like a long time, but we remember it like it was yesterday. And let me assure you we have not forgotten, and we will never forget, this sacrifice.”

Kochen recalled Kondek’s kindness and compassion, his passion and integrity and his camaraderie with his fellow officers. For those reasons, Kochen said, he refused to let Kondek’s death define him.

Gualtieri recounted his memories from the night Kondek was killed, of setting up a Sheriff’s Office command post to assist city police and comforting Kondek’s daughter, Aleena.

“Right around this time five years ago Chief Kochen stood at a podium like this talking to the greater Tampa Bay community through the media trying to explain what happened, trying to make sense of something you can’t make sense of,” Gualtieri said. “Tonight, we reflect back, and this will always be one of those days for all of us, because you never forget.”

Following remarks from local funeral director Thomas Dobies and Officer Larry Bird, who told Teresa Kondek “we will always be there for you, and we will never stop honoring Charlie K.,” Kondek’s widow was introduced, and the woman who has epitomized unfailing love, strength and toughness in the face of tragedy took the podium and ensured there would be no dry eyes in the house.

“Five years ago, I had no idea it would be the last time I’d see my husband alive,” she said, dabbing her eyes with a tissue as many in the audience did the same. “Never in a million years did I think I’d be speaking at a memorial service today.”

Listing several of the many events her husband has missed since his death, including weddings and gradations, anniversaries and proms, Teresa said, “But for all the things he’s missed, so many of you here tonight were there for.”

She added she doesn’t feel sad for her husband’s loss, but grateful for the time they had with him.

“Our kids carry so much of his life in them, when I hug them, I feel like I’m hugging him, too,” she said. “He taught us so much in life and even more in death…Don’t hesitate to bring his name up because I can assure you it’s never far from my mind.”

The ceremony concluded with the illumination of blue candles in Kondek’s honor while Largo Police Officer Ashley Hunt played “Amazing Grace” on bagpipes. This was followed by the changing of the guard by the Tarpon Springs Police Honor Guard, who stood watch over a wreath containing an image of Kondek’s badge with a thin blue line across it throughout the ceremony.

Afterwards, Kochen and Teresa Kondek spoke about the turnout.

“It’s great to see the strong show of support from law enforcement, family and friends,” Kochen said. “It’s awesome and it shows that we will never, ever forget Charlie K.”

After being inundated with hugs and interview requests, Teresa Kondek said, “I was surprised to see so many people showed up, especially with the rainy weather. Knowing they were willing to come out in the rain to show support for my husband and my family was overwhelming and I’m so thankful.”

Regarding having to get up in front of the crowd and convey her feelings on the fifth anniversary of her husband’s death, Teresa Kondek said, “I’m proud of myself for holding it together long enough to show my gratitude.”