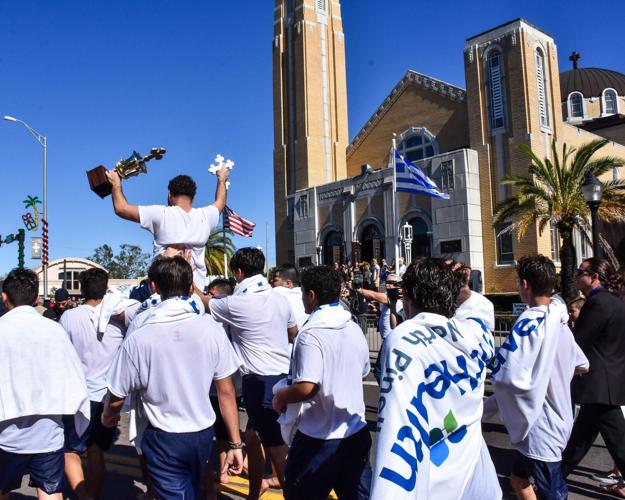 The procession from Craig Park to St. Nicholas Greek Orthodox Cathedral is a sight to see, as dozens of teenage boys carry the lucky one who retrieved the cross from Spring Bayou during Tarpon Springs’ annual Epiphany celebration. 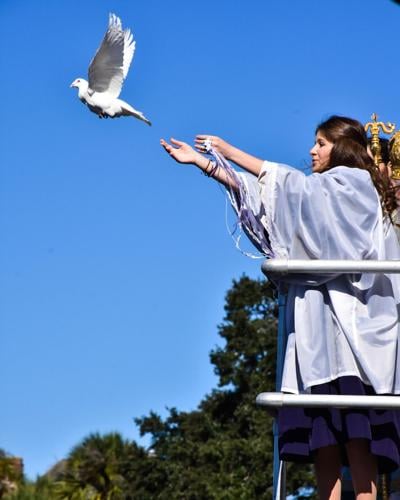 The release of the dove over the waters of Spring Bayou is a highlight of Tarpon Springs’ Epiphany Celebration, held annually on January 6. 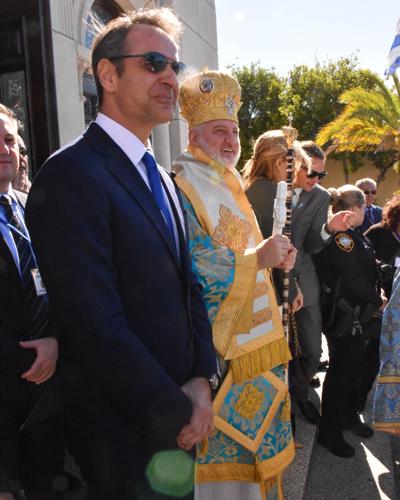 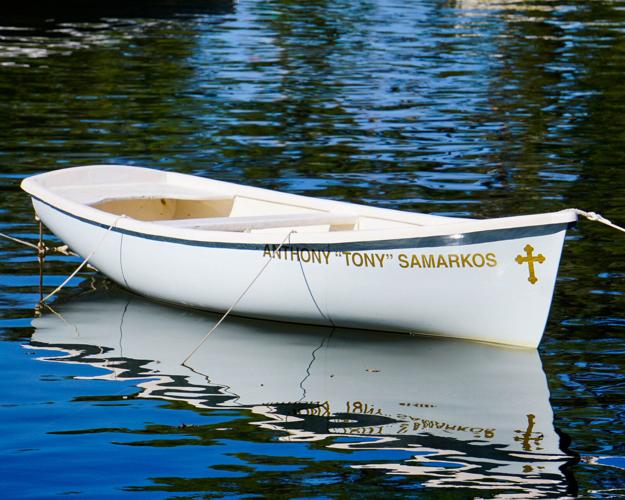 The teenage boys who dive for the cross in Spring Bayou during Epiphany anchor the boats in the water near the pier one week prior to the Jan. 6 event. 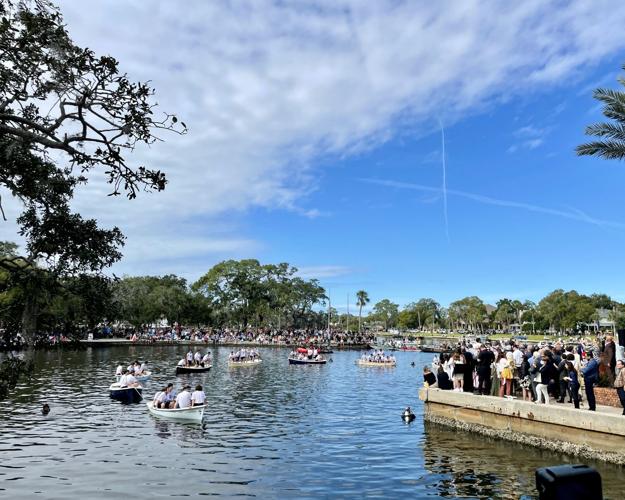 The procession from Craig Park to St. Nicholas Greek Orthodox Cathedral is a sight to see, as dozens of teenage boys carry the lucky one who retrieved the cross from Spring Bayou during Tarpon Springs’ annual Epiphany celebration.

The release of the dove over the waters of Spring Bayou is a highlight of Tarpon Springs’ Epiphany Celebration, held annually on January 6.

The teenage boys who dive for the cross in Spring Bayou during Epiphany anchor the boats in the water near the pier one week prior to the Jan. 6 event.

TARPON SPRINGS — The 117th edition of Tarpon Springs’ Epiphany celebration will “return to normal” on Jan. 6, according to event organizers, following two years of pandemic-related restrictions.

St. Nicholas’ Greek Orthodox Church’s annual celebration of the baptism of Jesus Christ promises to live up to its reputation as the biggest of its kind outside Greece, as thousands of visitors are expected in town next week for a schedule of events and activities spanning three days from Thursday to Saturday.

The Epiphany festivities begin on Thursday, Jan. 5, with the blessing of the fleet at the Sponge Docks, followed on Friday morning by the liturgy at St. Nicholas’ Cathedral, the cross dive in Spring Bayou and the return of the Glendi, or feast, at the Spanos-Pappas Community Center. The weekend schedule is set to conclude with the black-tie Epiphany Ball at the Pappas Center on Saturday night.

“This blessing is an annual opportunity for us to recall our need for God’s grace, as the Archbishop (Elpidophoros) beckons the Holy Spirit to descend upon the water of Spring Bayou,” Rev. Fr. Athanasios Haros, dean of the St. Nicholas’ Greek Orthodox Church, said in an event press release.

According to Tarpon Mayor Costa Vatikiotis, the city’s Epiphany celebration is “the oldest public observance of this day in the United States. For Orthodox Christians, it symbolizes the Theopnay, or the manifestation of God through the baptism of Jesus in the Jordan River. For other Christians, it commemorates the three Wise Men’s homage to the infant Jesus. For all in Tarpon Springs, it, too, marks the end of the Christmas season and the formal start of the New Year. It is a day of joy and celebration.”

Indeed, before COVID the event was earning international headlines; in January 2020, just prior to the start of the pandemic, Greek Prime Minister Kyriakos Mitsotakis came to Tarpon Springs, drawing a massive crowd and media coverage. With outdoor restrictions in Florida now lifted, Tarpon’s Epiphany celebration appears to be primed for a triumphant return in 2023. Here’s a look at the schedule:

This ceremonial event signifies the start of the Epiphany week activities, as several church clergy members and visiting dignitaries conduct blessings of the sponge and fishing boats at the Sponge Docks as well as the divers and fishermen, wishing them safe and prosperous travels. It’s a smaller ceremony away from the bright lights of the cross dive, but the blessing of the fleet has special meaning to many in the predominantly Greek waterfront community.

This highly spiritual service comprised of psalms, hymns and prayers is held in the St. Nicholas Greek Orthodox Cathedral and will be led by His Eminence Archbishop Elpidophoros of the Greek Orthodox Archdiocese of America and Metropolitan Alexios of Atlanta. Typically, only congregants of the church as well as officials such as Tarpon’s mayor, U.S. Congressman Gus Bilirakis, and Prime Minister Mitsotakis, are allowed to attend the ceremony, while a crowd gathers outside the steps on North Pinellas Avenue waiting to follow the divers in the procession to the bayou less than a half a mile away.

Pandemic or not, the scene of the cross dive is always an impressive spectacle, with the banks of Spring Bayou packed with patrons waiting to catch a glimpse of the divers as they run, as one, into the shallow waters and swim to the ring of dinghies they helped anchor near the pier a week prior. A white dove, symbolizing the Holy Spirit, will be released this year by 17-year-old Elena Gonatos before the Archbishop tosses the white and gold cross into the water, and the 68 teenage boys who earned the right to dive for the cross will take the plunge that’s believed to change one young diver’s life, and luck, from that day on.

One of the consequences of the pandemic was the forced cancellation of the Glendi, or feast, that follows the dive for the cross. During this festive event, which this year is being held at the Spanos-Pappas Community Center, attendees eat, drink, dance and celebrate the cross diver, the dove bearer, and every aspect of the holiday. According to Epiphany Committee Co-Chair Johanna Gatzoulis, the Glendi will feature five food trucks serving authentic Greek cuisine including Rusty Bellies, Gigglewaters and Meli’s Greek Street Donuts, as well as live Greek music and dancing courtesy of several local, national, and international troupes and performers. Admission to the event is free and it will begin after the cross dive.

Another popular Epiphany tradition returns this year as the week of celebrating concludes with a black-tie gala with dinner, dancing, and live entertainment, including a special performance by world renowned Greek singer and Lyra player, Dionisis Kornilakis. Tickets for the event, which will be catered by Delectables, cost $85 and can only be purchased online at stnicholastarpon.org/epiphanyball. For more Epiphany 2023 information, visit stnicholastarpon.org.