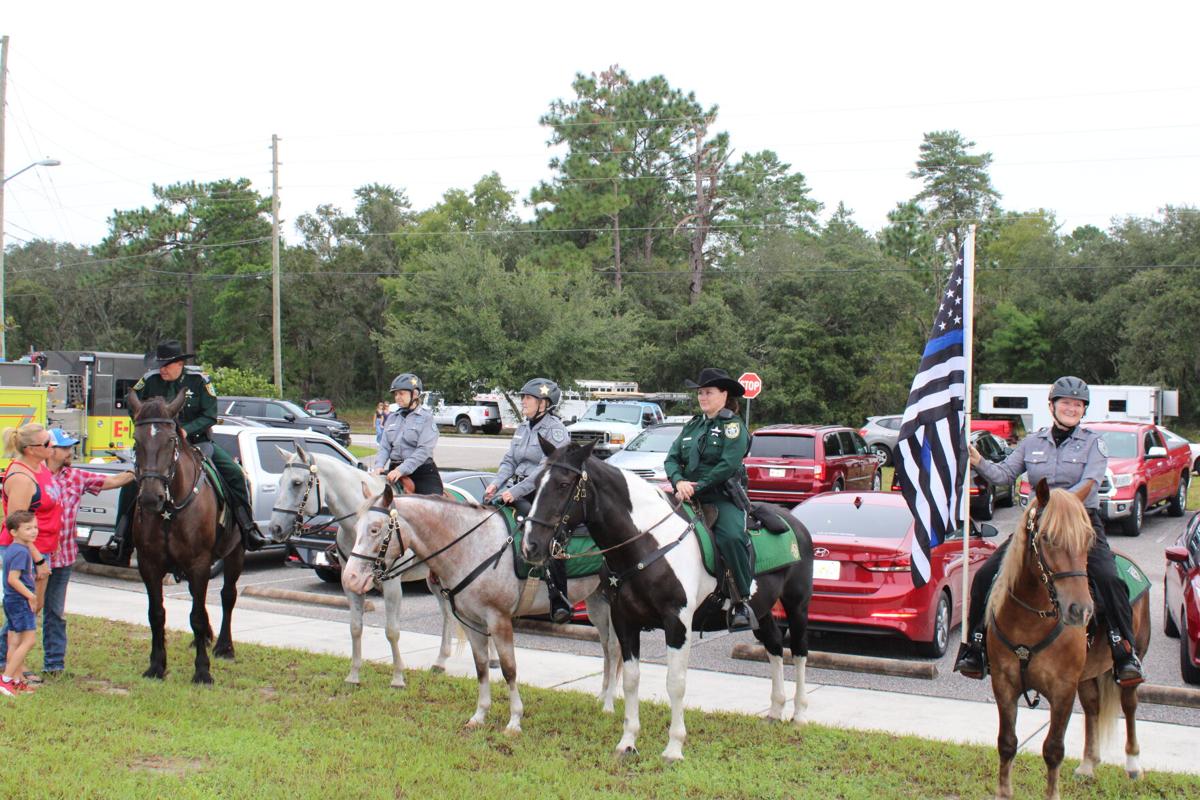 Mounted deputies from the Hernando County Sheriff’s Office got some attention on Saturday, Sept. 11, at the memorial ceremony. 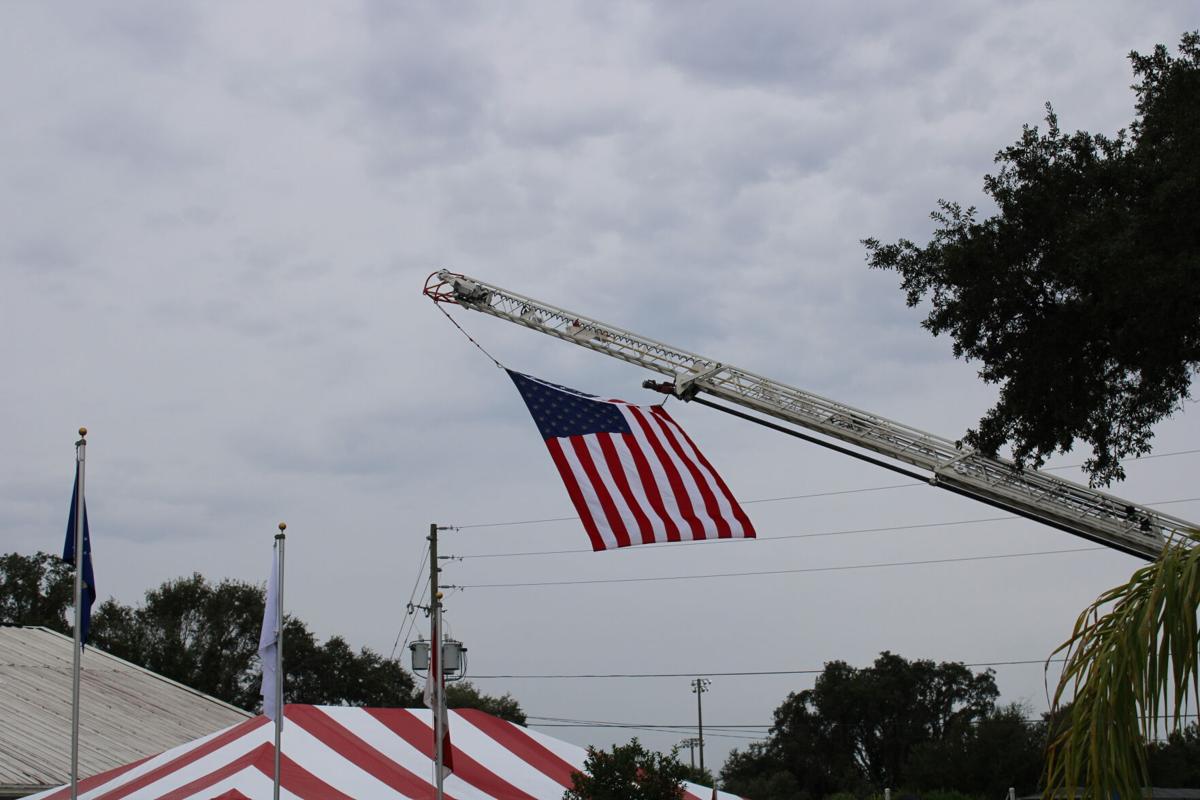 A U.S. flag hung from the end of a Hernando County Fire Rescue ladder truck. 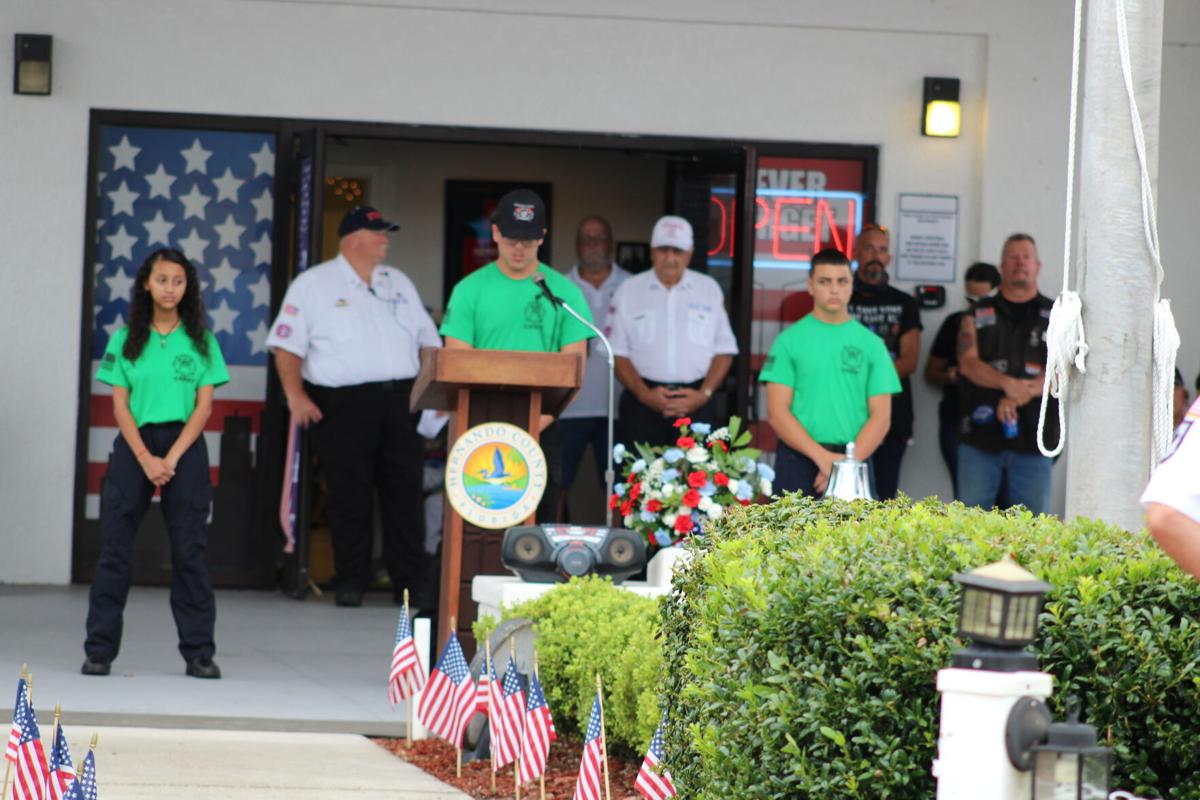 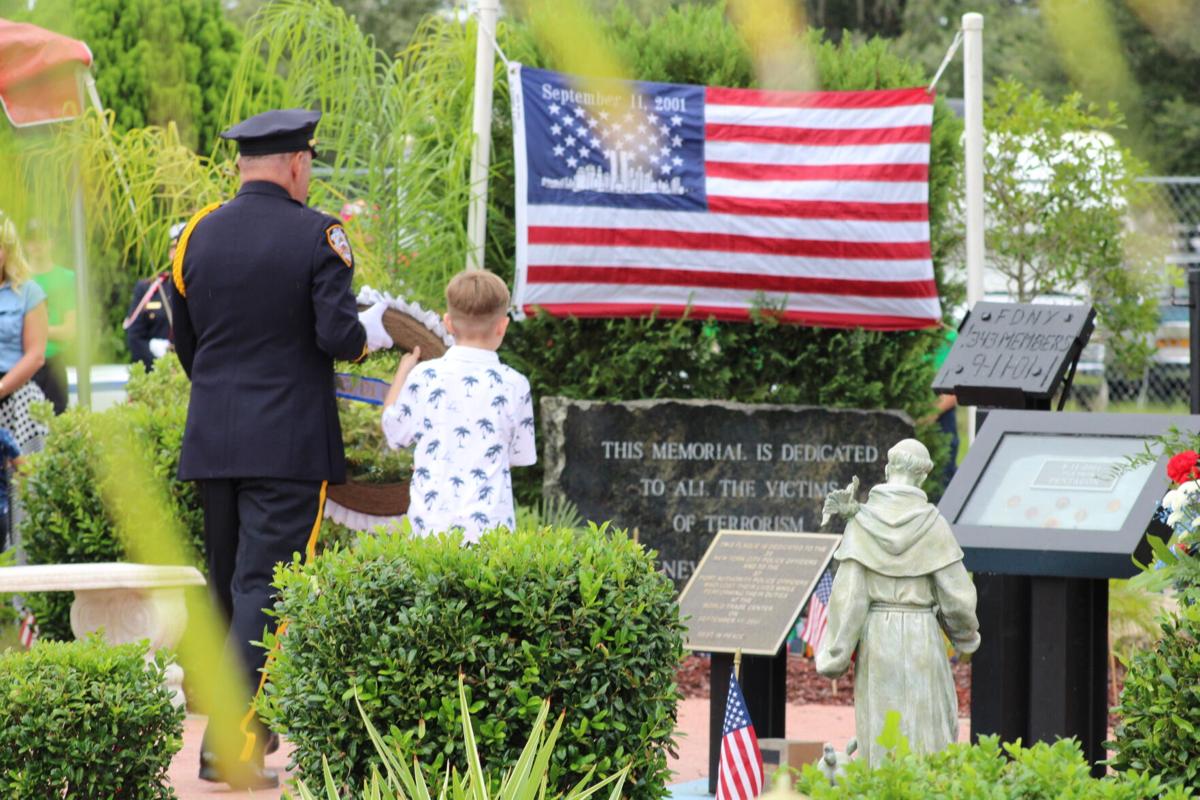 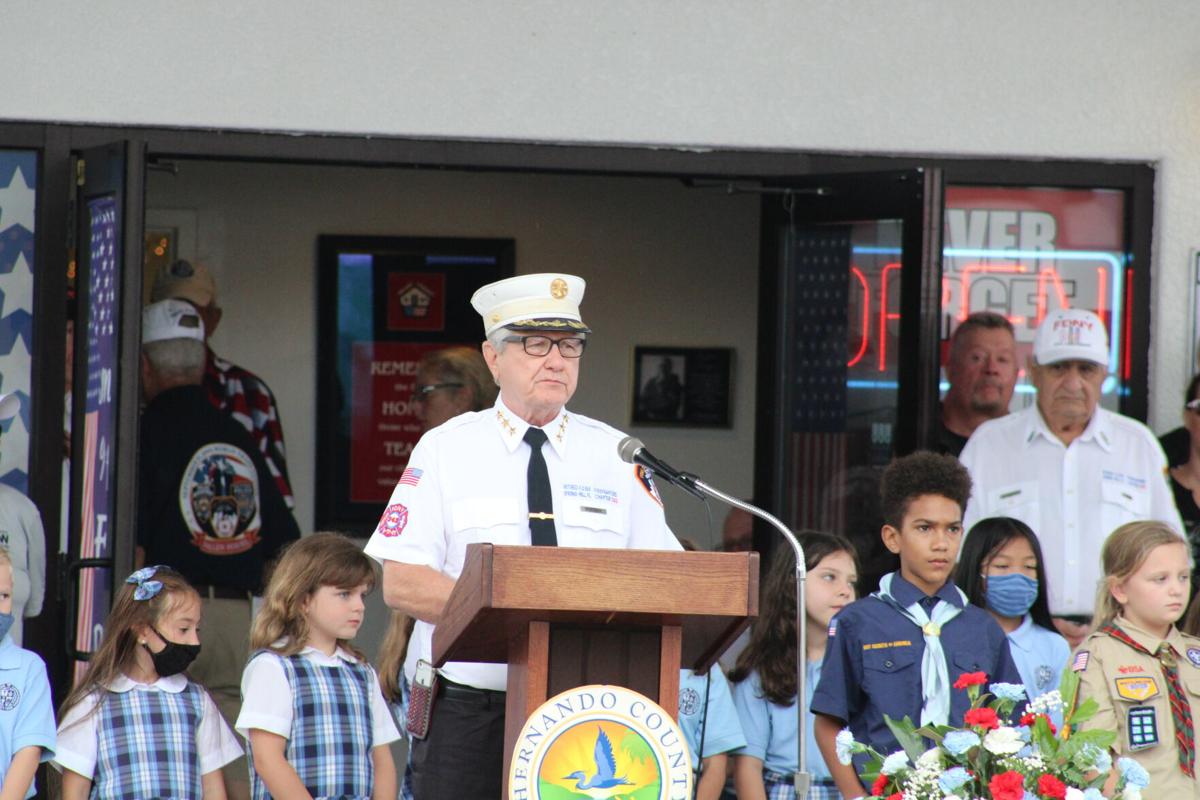 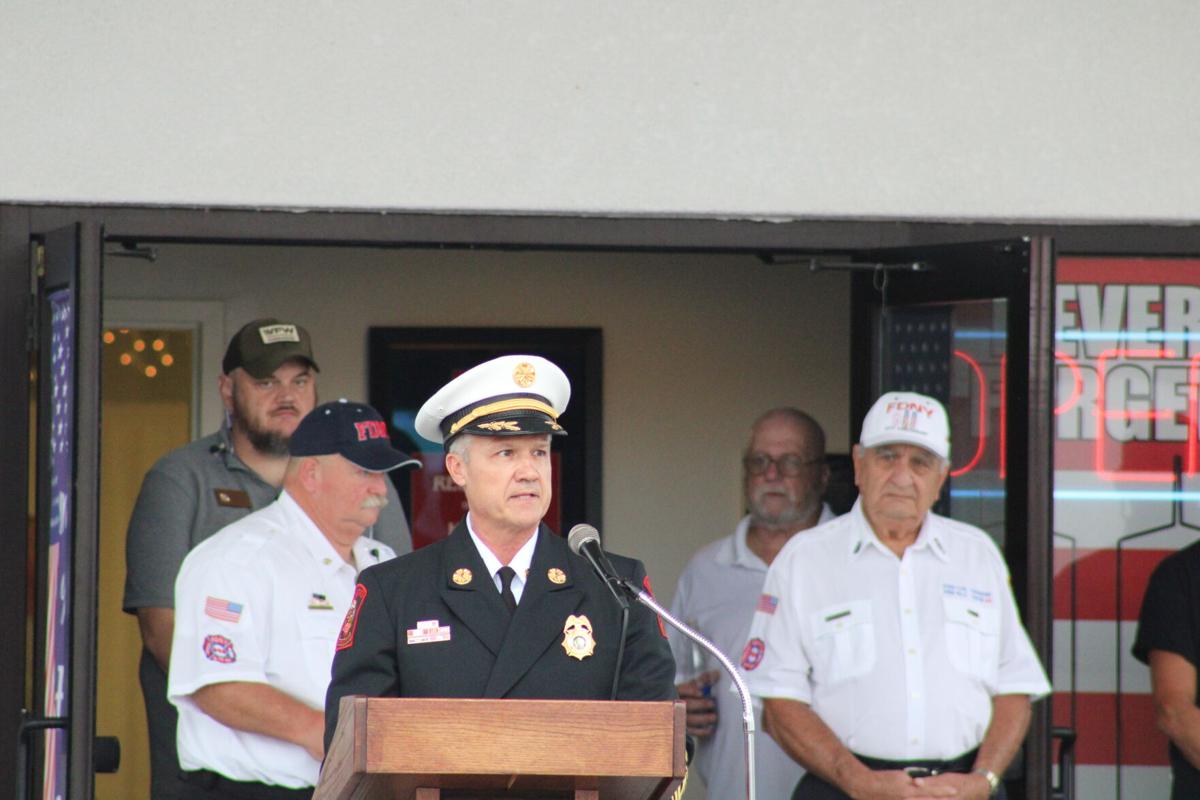 Mounted deputies from the Hernando County Sheriff’s Office got some attention on Saturday, Sept. 11, at the memorial ceremony.

A U.S. flag hung from the end of a Hernando County Fire Rescue ladder truck.

SPRING HILL — The 9/11 attacks happened before she was born, but they’re a reality for Zoe Lynn, 15, a fire cadet hoping to become a paramedic.

For her and fellow fire cadet Jadica Fender, 14, both of whom are students at Nature Coast Technical High School, the consequences are just as real as if they lived through it.

“We know it’s a special day, but it’s not part of our history, personally,” Zoe said. “But just like anything else that happened in the past, we do honor it and we do remember it.”

Jadica, who said he plans to become a firefighter, said, “I think it was a tragedy. I want to help.”

A large crowd filled two tents and the surrounding grounds outside VFW Post 10109 on Edward R. Noll Drive near Anderson Snow Road on Saturday, Sept. 11, to remember the 2,997 lives lost at the World Trade Center in New York; at the Pentagon in Washington, D.C.; in a field in Somerset County, Pa., and in four commercial airliners on a terrible Tuesday 20 years ago when the United States was attacked.

John Coleman, 42, a medically retired Navy sailor who is the first Veterans of Foreign Wars commander who is younger than the post he leads, said he was a quartermaster on the guided missile cruiser USS Vella Gulf, CG-72, out of Norfolk, Va., when he heard of the attacks.

“My ship was one of the first ones to respond,” Coleman said. The ship joined the USS Theodore Roosevelt battle group.

As he watched the crowd coming onto the Post’s grounds, he talked about the meaning of 9/11 to a country that took such a terrible blow 20 years ago.

“I feel like the country hasn’t forgotten, but I feel like it needs to be reminded,” he said.

The country needs to be more unified, he added. Coleman is married with five children and said he has talked to the older ones about 9/11 and Saturday’s ceremonies.

“My kids are patriotic because their dad was in the military, and they know what it means to come home under a flag-draped coffin,” he said, adding that the kids understand what’s going on.

Brendan Hillhouse of Spring Hill is 34. He’s kind of in the middle ground, having been in high school when the attacks happened. His daughter was at the event to sing with her group from school.

He can’t forget that morning.

“They kind of got us together, said something had happened and then they sent us home,” he said. “We didn’t really grasp it at the time until you got home and saw it on the news.”

His parents were horrified, he said. “It was one of the worst things that happened in our history.”

His life changed after that.

“I became more aware of the worldwide situation, kind of like how outside the U.S. things just aren’t nearly as good as they are. It’s chaotic,” he said.

As for Afghanistan, his brother fought there and he’d prefer that everybody come home.

“Logistically, it definitely didn’t work out that way. It’s pretty self-evident that it was handled incorrectly,” he said, speaking of the withdrawal from Afghanistan.

The time frame when the Taliban was out of power was valuable, but it’s like the withdrawal dialed back the clock to the pre-911 era, Hillhouse said.

Don Mailin, 73, of Brooksville said he was at a construction meeting the morning of 9/11 and “it was a somber meeting.”

He had served in the Seabees and was working as a construction superintendent. “I couldn’t wait to get out of there and see what the latest news was. At the same time, we had somebody who was signing a contract for a multimillion-dollar project. At the same time. It didn’t faze him a bit. It was just another day.”

Gary Newell, 75, served three tours in Vietnam and earned a Purple Heart. He said people have to bear in mind that — even with the recent pullout in Afghanistan — the war on terrorism is not over.

“This is just our way of reminding people that the war still goes on, and if we let our guard down, if we don’t remember what happened on 9/11, it’s going to happen again, they’re going to come back at us,” he said.

With all the equipment we left behind, he said he is certain the Taliban will find a way to use the technology to come after us.

“I think we really should have finished the job,” he said. “We went over there to liberate the people and to show them what democracy was about, and I kind of think we let them down. We can’t keep doing that as a superpower.”

A few elected officials were in attendance, including County Commission Chairman John Allocco, who grew up north of New York City and was living and working in Spring Hill when the attacks happened. He said he mainly felt anger.

“When the first one hit, I thought it was an accident,” he said, or maybe they were repeating a story about a plane hitting a building in New York City. “It wasn’t that long after that we heard about the second one.”

Anyone who was thinking, Allocco said, soon realized that it wasn’t an accident. His mother was a nurse, and she went down to New York City to offer assistance.

The attacks were a stark reminder, he said, that nothing lasts forever. “We don’t respect those things that are dear to our hearts, that eventually they’re going to go away,” he said.

In the ceremony, after the Pledge of Allegiance, the national anthem and other patriotic songs, Sheriff Al Nienhuis and Fire Chief Scott Hechler made remarks, followed by Fire Cadet Zackery White’s recitation of the Fireman’s Prayer.

Nienhuis pointed out that the Preamble to the Constitution talks about “domestic tranquility,” and that sometimes it seems the protective services do too good a job of protecting the public “from some of the horrors that we get to see.”

“Although the things we deal with are not pleasant, sometimes they are necessary,” he said.

Hechler, the fire chief, said that on 9/11 thousands of first-responders risked their lives to save others. Thousands died, he said, thousands more were injured and many people today are still affected by the events of that day.

“Today, we honor them all,” he said. “We celebrate their lives, we renew our commitment to never forget. Tens of thousands of mothers and daughters and fathers and sons got up that morning, and they had no idea what horrors lay ahead.”

People were united then as they saw what happened, Hechler said.

Chaplain Gaye Hieb delivered a touching memorial to the Rev. Mychal Judge, a Franciscan priest who, Hieb said, is considered the first official victim of the 9/11 attacks. Judge worked and lived in Manhattan starting in 1986, and was appointed chaplain to the Fire Department of New York in 1992, where he counseled firefighters and their families.

“His whole ministry was about love,” Hieb said, and was a community advocate for many causes.

Upon learning that the World Trade Center had been hit, Judge raced to the site and entered the lobby of the North Towers, offering aid and prayers to the injured and the rescuers. “When the neighboring South Tower collapsed at 9:59, debris went flying through the North Tower lobby, killing many inside including Father Judge. At the moment he was killed, he had a blunt trauma to his head.”

Firefighters carried the priest’s body to the altar of nearby St. Peter's Catholic Church before being taken to the medical examiner’s office. He has been recognized as “Victim 0001.”

A memorial to Judge, his life of service and tragic death was dedicated at the VFW’s 9/11 memorial.

Lightsey served for 34 years and said he lost good friends in the 9/11 attacks. Regarding the bells, he said, “I have heard them too many times.”

He said the memorial started 20 years ago with a small ceremony. “Today we have this large group from the community,” he said. “Thank you for coming; thank you for being part of it.”

Following a rifle fire salute and the playing of taps, the ceremony ended with a song by Notre Dame Catholic School students, and then refreshments inside the VFW hall.