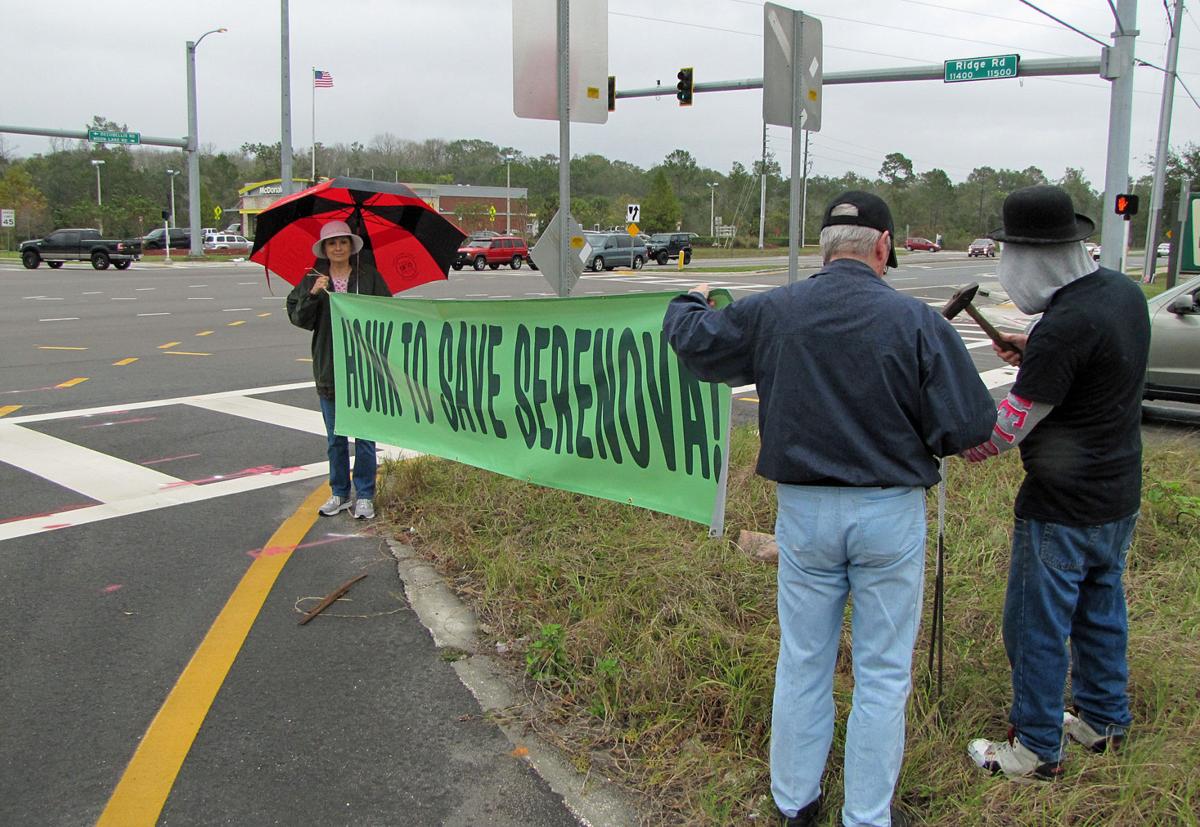 ‘Honk to Save Serenova,’ a sign reads at a Dec. 9 protest against extending Ridge Road from Moon Lake Road to Suncoast Parkway through wetland preserves. Putting up the sign are, from left, Linda Balke, Dan Callaghan and Bill Williams. 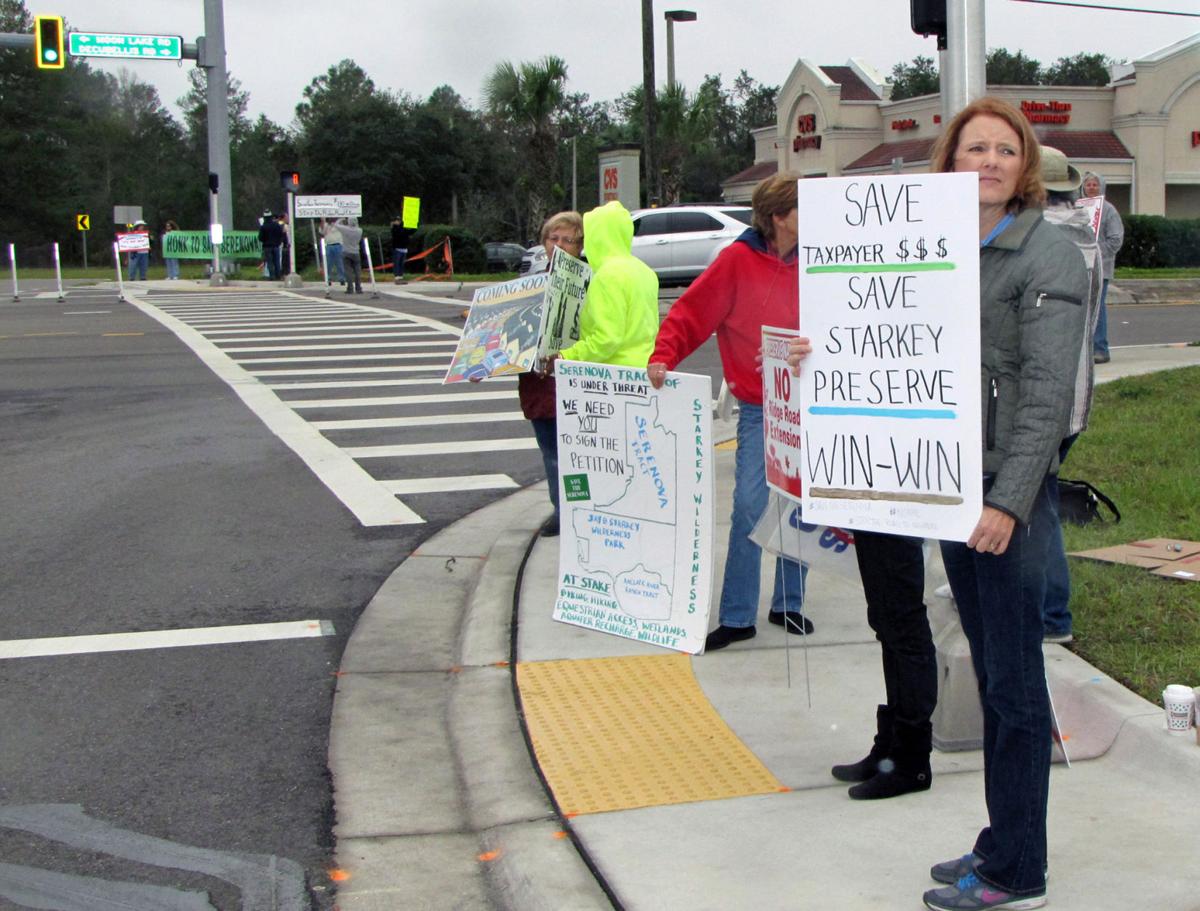 More than a dozen protesters wave signs against extending Ridge Road east through wetlands during a Dec. 9 morning rally. 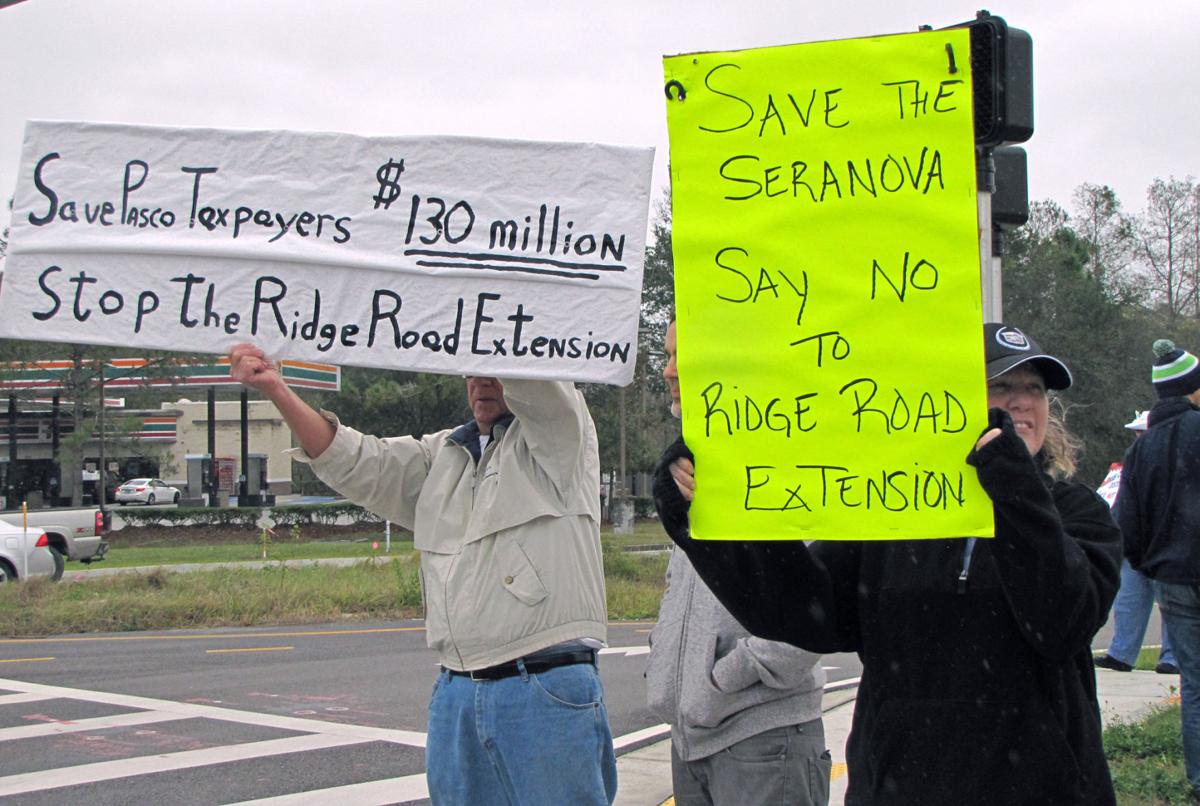 ‘Honk to Save Serenova,’ a sign reads at a Dec. 9 protest against extending Ridge Road from Moon Lake Road to Suncoast Parkway through wetland preserves. Putting up the sign are, from left, Linda Balke, Dan Callaghan and Bill Williams.

More than a dozen protesters wave signs against extending Ridge Road east through wetlands during a Dec. 9 morning rally.

NEW PORT RICHEY — Borrowing a credo of postal carriers, protesters wanted to deliver a message Dec. 9 that neither rain, nor gusty winds nor plunging temperatures from a cold front would stop their rally against a proposal to extend Ridge Road through wetlands.

Between one dozen and two dozen people waved signs against the Pasco County plan to lengthen Ridge east from Moon Lake Road to the Suncoast Parkway toll road. The route would go through the Serenova preserve, a tract that serves as a sanctuary to many species of wildlife that was set aside to mitigate the impact of the parkway. A second phase could extend Ridge Road from the toll road to U.S. 41, although no funds exist for that section yet.

“We’re not going to go down quietly."

“We’re not going to go down quietly,” if the U.S. Army Corps of Engineers decides next year to grant Pasco the permit it needs to build the Ridge Road extension, Tim Martin, conservation chairman for the Suncoast Sierra Club, pledged Saturday at the rally. The Sierra Club, one of the most vocal critics of the Ridge Road plan, has three lawyers standing by and “we will go to court on this,” Martin said.

The Ridge Road extension would be another evacuation route, Commission Chairman Mike Wells emphasized. The route would have been needed if a hurricane hits the area with the full force of winds well over 100 mph as originally predicted for Hurricane Irma, he believes. Irma weakened before moving through Pasco.

Regarding concerns from the Sierra Club and other environmental activists that the Ridge Road extension will spur commercial encroachment with Serenova, Wells said, “There will be no development on this side of the Suncoast.”

“There will be no development on this side of the Suncoast."

The roughly 6,500-acre Serenova Tract is part of the Starkey Wilderness Preserve. Both are managed by the Southwest Florida Water Management District.

First proposed in 1998, the Ridge Road extension last year was placed on a fast track for review by regulators, Pasco officials explained. U.S. Rep. Gus Bilirakis, R-Palm Harbor, wrote newly inaugurated President Donald Trump and urged the president to end what Bilirakis has called “stonewalling” by the Jacksonville office of the Corps of Engineers while reviewing the Ridge Road extension permit request.

The Corps of Engineers has jurisdiction over the Ridge Road permit under the federal Clean Water Act.

Among some 18 alternatives, officials believe Modified Alternative 7 could minimize wetland impacts the most, including options such as upgrading S.R. 52 and S.R. 54.

Florida’s Turnpike Authority, which built the Suncoast Parkway, and Pasco County are co-applicants for the Clean Water Act Section 404 Permit governed by the Army Corps. The Suncoast Parkway was constructed with an overpass for the Ridge Road extension.

Once Pasco engineers complete 60 percent of construction designs, Beneck added, the tentative plan might be forwarded to Army Corps engineers for preliminary review.

In fall 2018, a permit decision could possibly be reached on the final design, Beneck reported in a Dec. 8 email reply to inquiries.

About $14 million so far has been spent on the Ridge Road extension project, Beneck estimated.

Protesters on Saturday waved signs that claimed the final cost could mushroom to $130 million with construction expenses, a number disputed by county officials.

“They’re spending tons of taxpayer money on this project,” the Sierra Club’s Martin said. “We’ve done freedom of information requests on some of the Pasco County emails” concerning costs.

The road goes through the heart of Serenova preserve, through wetlands, Martin said. “It might be a narrow slice, but you’re bisecting a preserve, so you’re fragmenting habitat when you do that. You could build all the bridges you want,” but wildlife could still lose habitat.

Dan Rametta, with Citizens for Sanity and Sierra Club, on Saturday challenged estimated construction costs for the Ridge Road extension. The group, based in Land O’ Lakes, seeks to block overdevelopment in Pasco.

“Cost is a big factor and it’s got to be doable,” Rametta said Saturday in an interview at the rally. Plus, no money has been set aside yet for the second phase of a Ridge Road extension to U.S. 41.

“It’s not just the wetlands,” Rametta said about the proposed Ridge Road extension route. Some 165 acres of Serenova had been set aside “way back when” as mitigation for the Suncoast Parkway, he pointed out. “The conservation easement says it’s supposed to remain in a natural state, for passive recreation, in perpetuity. Those are pretty clear statements.”