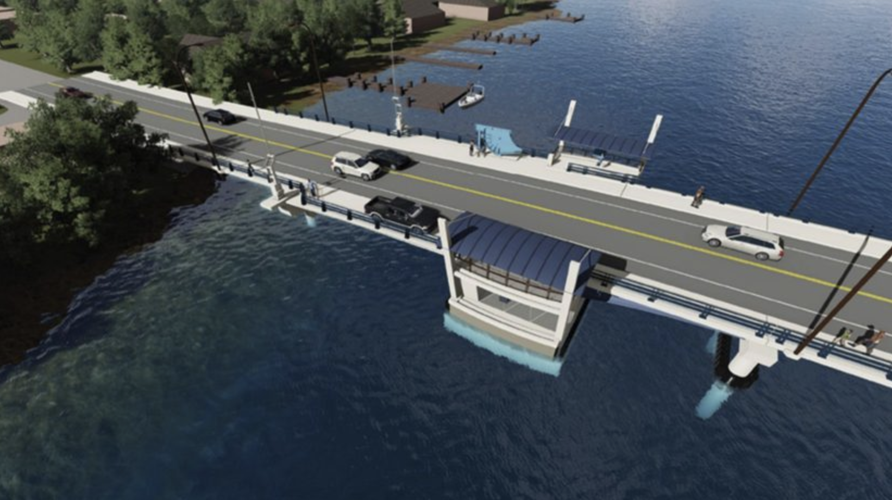 The official clock for replacing Tarpon Springs’ Beckett Bridge has started ticking. In a Nov. 15 presentation to city commissioners, Pinellas County officials laid out the timeline for building a new lifting bridge that spans Riverside Drive. 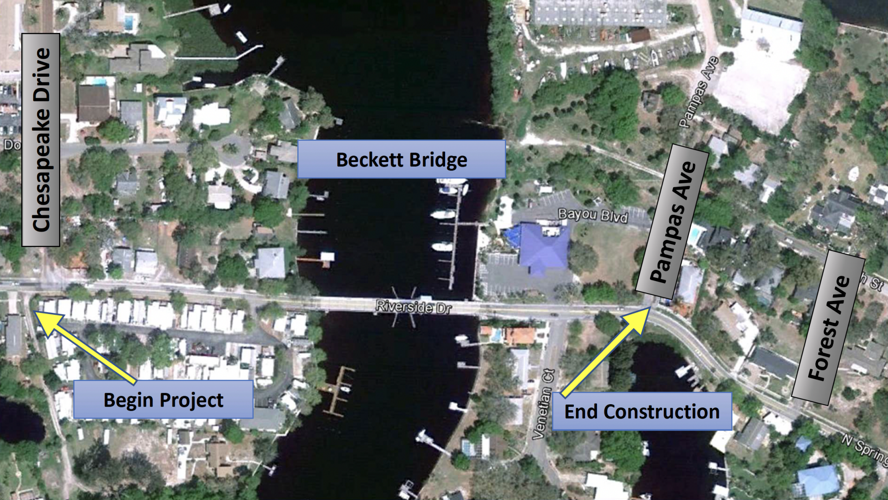 The official clock for replacing Tarpon Springs’ Beckett Bridge has started ticking. In a Nov. 15 presentation to city commissioners, Pinellas County officials laid out the timeline for building a new lifting bridge that spans Riverside Drive.

In a Nov. 15 presentation to city commissioners, Pinellas County officials laid out the timeline for building a new lifting bridge that spans Riverside Drive.

County officials also provided an update on the planned Riverside Drive drainage improvement project to be done concurrently with the Beckett Bridge replacement.

Approval of the final design for the third iteration of the drawbridge should be completed by the end of the year, to be followed by putting advertisement out for contractor construction bids by spring, with a projected construction start date of the end of 2023, said Ann Venables, project manager with Pinellas County Public Works.

To be funded by the Penny for Pinellas sales tax, bridge construction will take an estimated 21 months.

The bridge project is also eligible for federal funding through an application for a Federal Highway Bridge Improvement grant submitted Sept. 8 that would cover the cost for the city’s utilities adjustments and relocation at the new bridge, Venables said.

Based on the county’s projected schedule, Beckett Bridge — which spans the Whitcomb Bayou on Riverside Drive — will be completed in late 2025.

The now 98-year-old Beckett Bridge has a storied history that dates to 1924 when it was first constructed with timbers and a steel movable span. The timber portion was eventually replaced with metal in 1956.

The bridge has since then deteriorated to where it’s now deemed “structurally deficient” and “functionally obsolete” with “outdated geometry” by the county.

The county’s bridge project consists of two parts: construction of the bridge, and drainage improvement on Riverside Drive by installing new stormwater drains to improve drainage and reduce on street flooding, Venables said.

The new bridge will be 20.5 feet wider at 48.7 feet than the existing bridge, with a 7.8-foot vertical clearance when closed, and unlimited clearance when the drawbridge is open, Venables said.

The existing bridge has no road shoulder and narrow sidewalks, according to Venables’ presentation.

The new bridge will feature 10-foot driving lanes in each direction, 4-foot shoulders and 6.5-foot walkways on its east and west sides. However, west of the bridge there will only be a 6-foot sidewalk on one side.

The bridge project will also re-route the city’s main water and sewer lines now crossing the Whitcomb Bayou under the existing bridge will be relocated to cross under the bayou north of the Tarpon Springs Yacht Club, Venables said.

While Commissioners welcomed the two projects, they also offered up multiple criticisms and questions.

Vice Mayor Craig Lunt asked county officials whether they had conducted a study on the drainage and ecological considerations of the project to determine the environmental impact of drainage runoff to be now directed into Kreamer Bayou.

Venables said the decision to drain runoff into Kreamer Bayou was primarily based on “the drainage flow in the system and the way that the system is designed.”

“This ended up being the best choice from a drainage standpoint,” Venables said. “We don’t anticipate any substantial impacts to the bayou from the runoff.”

Commissioner Jacob Karr questioned the design plan drainage system, asking whether any drainage filter devices, such as a baffle box, will be installed to catch debris from entering the bayou.

According to Erin Lawson, manager of transportation and engineering section of the capital improvement division of Pinellas County Public Works, the new bridge would employ a “traditional drainage system,” or “swale system” — essentially a broad, shallow ditch used to redirect water on a property to capture sediments and oils before getting to the drainage pipe.

Karr also criticized the bridge plan design for its lack of a sidewalk on the south side of Riverside Drive, since the county was not able to acquire the right of way needed to build it.

“The county deemed that attempt (to acquire the right of way) as unfeasible at this time,” Venables said.

“I think the county administrators messed up on this one — they missed the boat on that one,” Karr said.

Commissioner Michael Eisner asked county officials why an “oil box” — to capture oil and debris from seeping into the bayou — was not included in the design plan.

“We would be negligent in letting this (debris) go into our bayou,” Eisner said.

Eisner also questioned the county’s bridge design for not including a sidewalk at the south side of the bridge.

Commissioner Panagiotis Koulias asked county officials whether they had a concrete starting date for bridge construction to avoid conflicts with the city’s own separate construction projects slated for the next two to three years.

County officials said the bridge construction start date is dependent on acquiring required easements for the project to install sidewalks.

Residents also had questions for county officials about the bridge and drainage projects.

Environmental activist Peter Dalacos asked whether the city or the county will be responsible for the debris waste collected by the swale or buss boxes installed by the project.

“Who will be responsible for their maintenance?” Dalacos said.

The county will hold a public information meeting possibly at the Tarpon Springs Yacht Club at the end of 2023 when a contractor is on board to update Tarpon Springs residents on the bridge’s final design and construction timetable, Venables said.

The county has also set up a Beckett Bridge construction information website at https://pinellas.gov/projects/beckett-bridge-replacement-project.