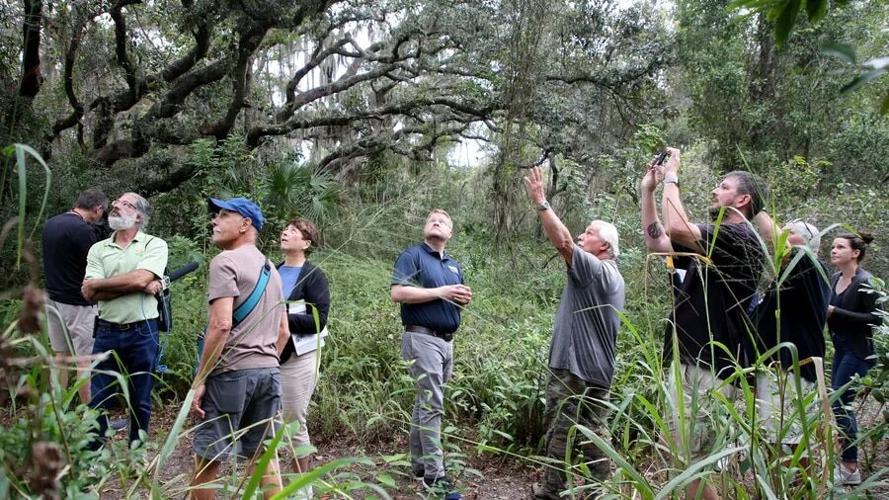 Members of the media join the West Klosterman Preservation Group for a tour in November 2021 of 14 acres owned by Pinellas County Schools in Tarpon Springs. A state grant helped the nonprofit group close the gap to meet the school district's $3 million asking price for the land. 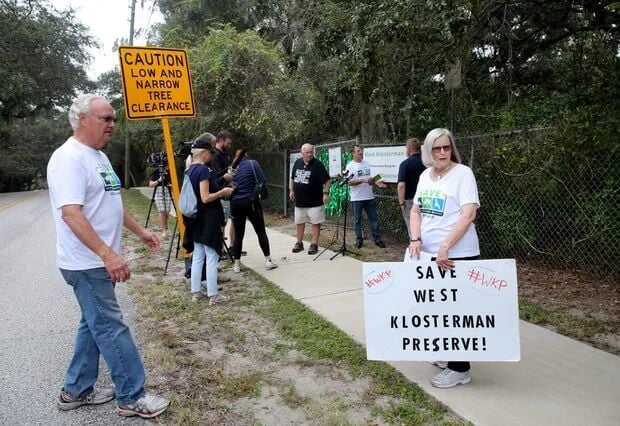 Members of the media join the West Klosterman Preservation Group for a tour in November 2021 of 14 acres owned by Pinellas County Schools in Tarpon Springs. A state grant helped the nonprofit group close the gap to meet the school district's $3 million asking price for the land.

Two and a half years into their fight to save some of the last remaining forest in Pinellas County from a housing developer’s bulldozer, a group of residents helped secure the funding needed to buy the land for preservation.

The Joint Legislative Budget Commission on Sept. 9 awarded Pinellas County $2.5 million toward the purchase of the 14 acres on West Klosterman Road, which is some of the last 1% of original scrub left in the county.

Since their mission began in early 2020, the West Klosterman Preservation Group, a nonprofit made up of neighbors and supporters of the land in Tarpon Springs, have raised $544,000 through online campaigns, beer crawls, sign-waving events and other efforts.

The state grant, one of 238 awarded across the state, helped them close the gap in a time crunch to meet the $3 million asking price by the property’s owner, Pinellas County Schools.

“We’ve gotten all the constituents in this deal to get behind us and support the fact that this should be a preserve, not a condominium,” said Tex Carter, president of the preservation group.

The school system bought the land in 1990 but never ended up developing it. It is now home to more than 60 threatened or endangered plant and animal species.

When the School Board first put the land out to bid in early 2020, it got four offers from housing developers topping $3.3 million. By then, neighbors had caught wind, formed the nonprofit and lobbied the School Board to give them time to save it.

School officials agreed to sit on developers’ offers, but fundraising came slowly from mostly small donors. By June 2021, the School Board gave the nonprofit a firm deadline: They had until July 2022 to raise $3 million.

The preservation group thought they had the money when a $3 million appropriation passed the Florida Legislature this year.

But the award was among $3.1 billion in projects that Gov. Ron DeSantis vetoed in June from the 2023 state budget.

The funding awarded by the Joint Legislative Budget Commission was one of $175 million given to 238 projects sponsored by lawmakers across the state.

The commission made a note that no project identical in “amount or purpose” to DeSantis’ vetoes was considered for these local grants. But the West Klosterman project squeezed through with nothing substantively different about the project description, except for the dollar amount being requested.

“I am happy it is getting funded, and I am glad the land will be preserved,” said state Rep. Chris Latvala, R-Clearwater, who sponsored the appropriations bill and the local grant request for the project

The West Klosterman Preservation Group plans to combine the 14 acres with the 76-acre Mariner’s Point Management Area directly to the north, which is nonpublic-access land Pinellas County has conserved for three decades. Pinellas County officials have agreed to assume ownership of the 14 acres.

The preservation group’s treasurer, Kay Carter, said there are still logistical steps ahead. Pinellas County is the recipient of the state grant, so the money will have to be transferred to Pinellas Schools before the land is deeded to the county.

While Mariner’s Point is not open to the public, she said the group is discussing potentially having a public access for the 14 acres.

She noted the community effort that got the project to this point. Nearly 1,000 individuals donated, and countless supporters shared the word on social media. The Pinellas Community Foundation acted as a repository for donations and county officials pledged support.

The School Board, which first showed reluctance to discard the developers’ offers, ended up supporting the nonprofit’s goal.