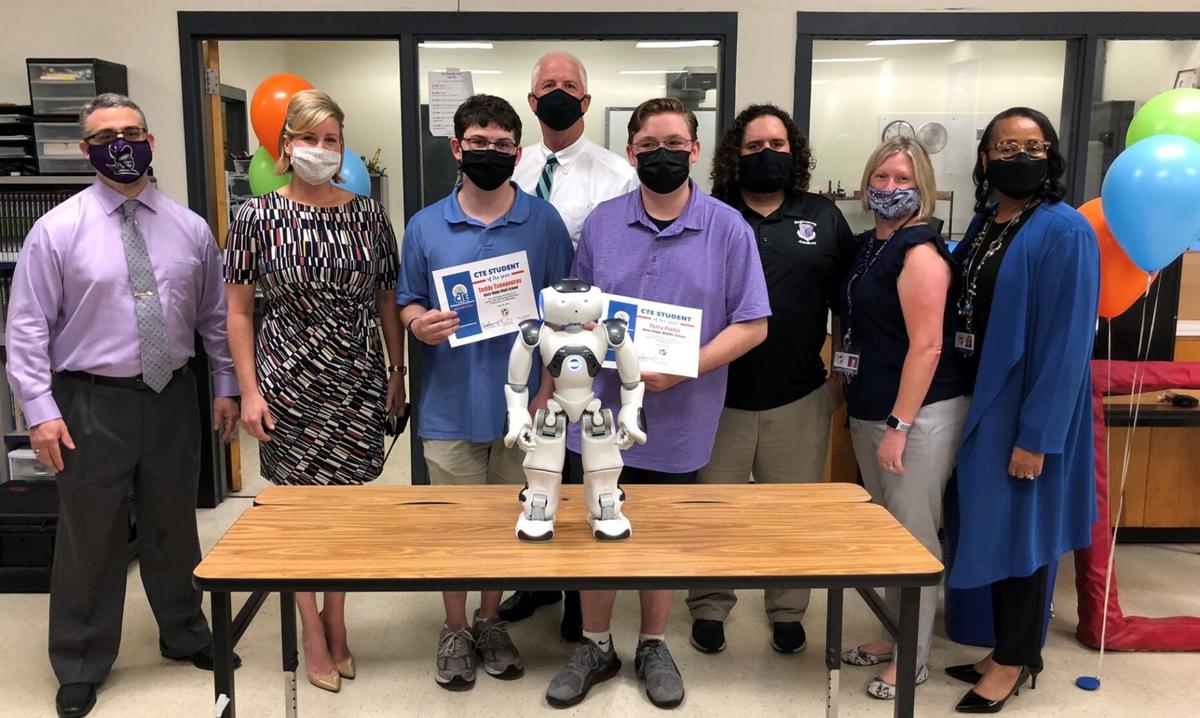 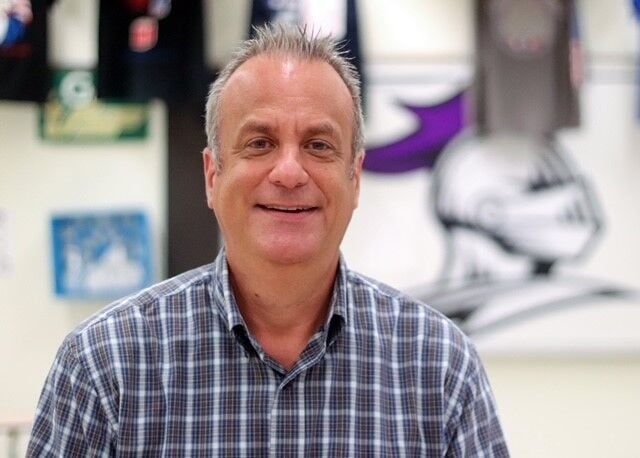 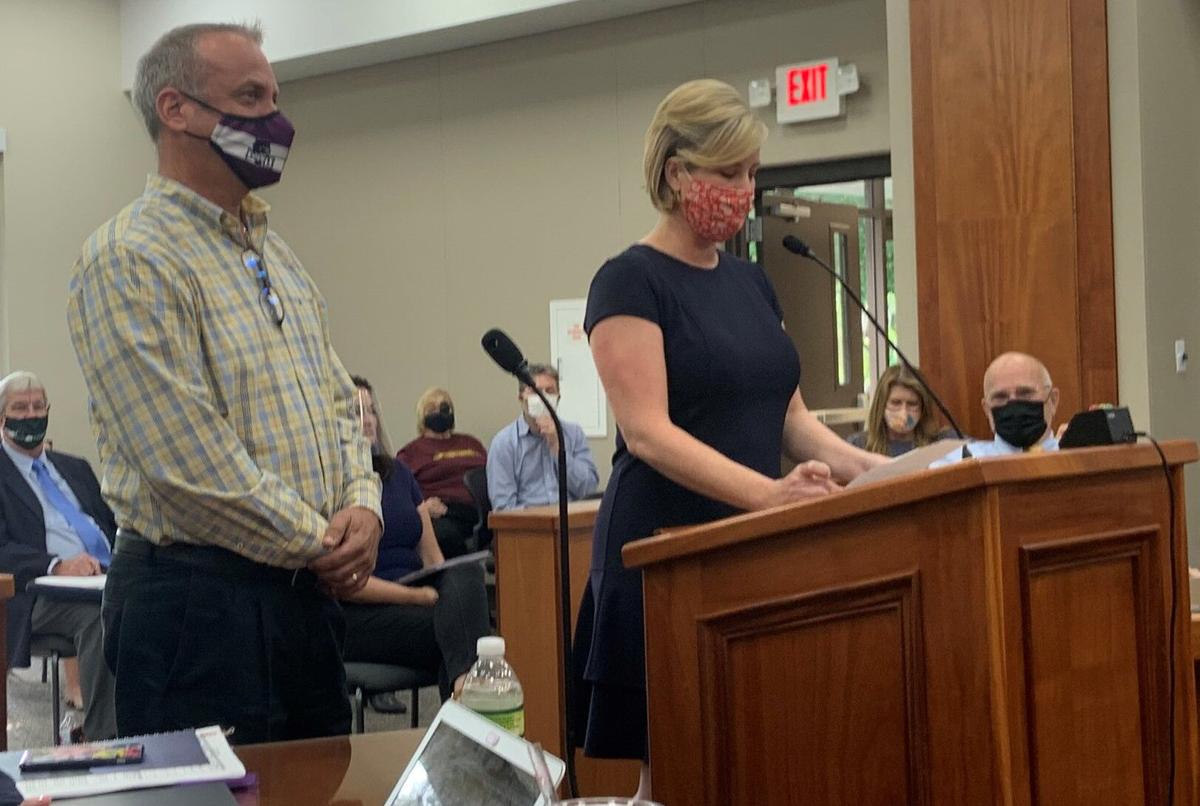 LAND O’ LAKES — If it weren’t for a little trickery, River Ridge High School teacher Tim Newman may not have shown up to the April 20 Pasco County School Board meeting.

“We may have told him that he was coming to celebrate one of our students,” River Ridge High Principal Toni Zetzsche said last Tuesday evening, “but we are here to talk a little bit about him.”

The reason for getting Newman over to the Land O’ Lakes District Office complex was to recognize his contributions to the school and positive impact on students. The honor was a first, as Pasco Schools Superintendent Kurt Browning introduced the new program prior to Newman and Zetzsche approaching the podium.

“Oftentimes we hear about everything that is wrong with public K-12 education,” Browning said. “I know for a fact that there are great things going on in our classrooms each and every day. I wanted the opportunity to highlight the great work that’s happening in Pasco schools.”

The School Board meets twice a month and an educator will be recognized each evening, Browning added. “While we have a host of terrific people across this district working hard every day to support the education of our students, our teachers have quickly adjusted to accommodate ever-changing needs of our students before, during and even after, I’m confident, this pandemic.”

Newman teaches U.S. history at River Ridge High and has been on staff since 1991, Zetzsche said. Prior to being at the New Port Richey high school, Newman taught next door at River Ridge Middle.

“No matter the role — teacher, coach, class sponsor — Tim had a great rapport with his students and always engaged in the school through all of our activities,” Zetzsche said, reading an email written by a former teaching colleague of Newman’s at River Ridge Middle. “He is a humble teacher, quiet, a strong role model, and always focused on the students.”

“Newman is my favorite,” the student wrote. “He builds relationships with each one of his students and never fails to tell you when you’re doing a great job or when you’re not. It is his positive attitude toward his profession, and his sarcasm, that creates a comforting environment for his students. Newman understands how to establish a good connection and a relationship from teacher to student.”

School Board member Alison Crumbley represents District 4, which includes the River Ridge Middle/High School campus. “You taught all three of my kids, so I can vouch as a parent that all of that is true and more.”

Newman, who declined to speak at the podium, will receive a $50 gift certificate courtesy of the Pasco Education Foundation, Browning said.

CTE Students of the Year

Immediately following Newman’s recognition, the School Board presented this year’s Career and Technical Education Middle and High Students of the Year.

According to the district, students are nominated based on their overall grade-point average and CTE program grade-point average, participation in extracurricular activities and clubs, offices held, participation in the co-curricular Career and Technical Student Organization, and achievements in CTSO competitions. Nominees are then judged by the CTE Program coordinators, managers and specialists.

Both students were introduced by Pasco Schools Assistant Superintendent Kim Moore and were provided the opportunity to read submitted essays.

“Terry is an exceptional middle school engineering student,” Moore said of Pixler. “His academic excellence shines through his work in robotics, which has allowed him an incredible opportunity to begin an accelerated course work at the high school level where he participates in the engineering academy.”

Pixler credited his father’s “love to create and build” and his mother’s “encouragement to follow dreams” for his current scholastic successes, adding that he aspires to attend Embry-Riddle Aeronautical University and become an aerospace engineer.

Tsengouras, a senior, “has been a cornerstone” of the first robotics team at River Ridge High, Moore said, and helped introduce LEGO league robotics teams to elementary and middle schools in Pasco County.

Tsengouras said he is on pace to receive his associate’s degree upon graduating from high school this spring and aims to acquire his master’s degree in mechanical engineering in four years. A long-term career goal is “to design and develop robotic technology for the exploration of other planets,” Tsengouras said.