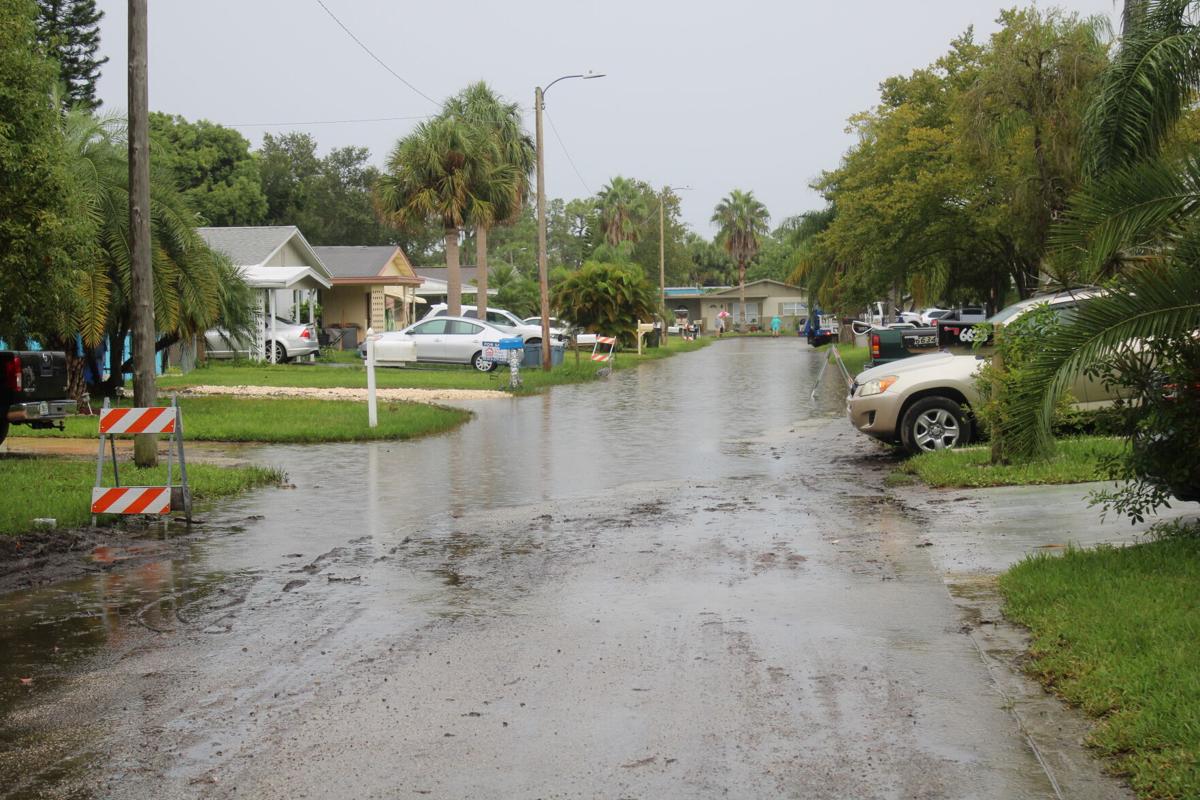 A flooded road in Green Key. 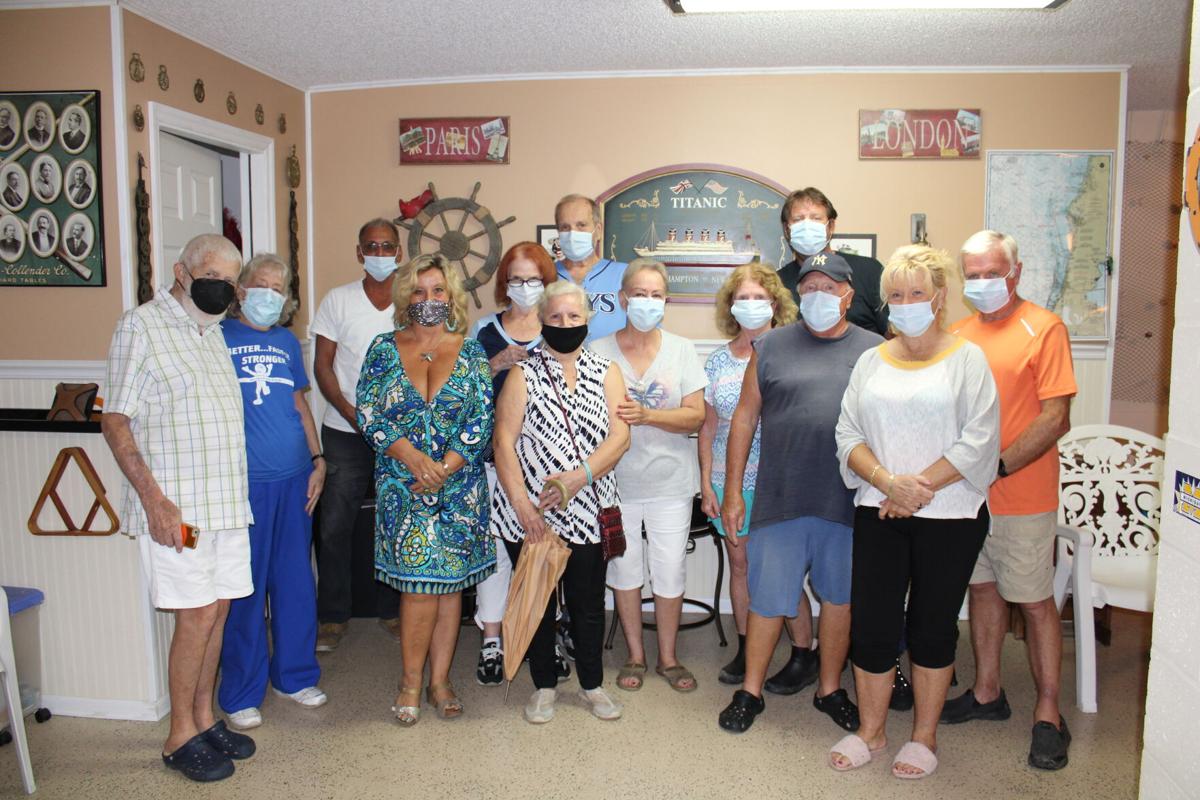 Residents of the Green Key community gathered in Cheryl Orchard’s house to talk about the flooding problems they’ve been having and their frustrations with the county. 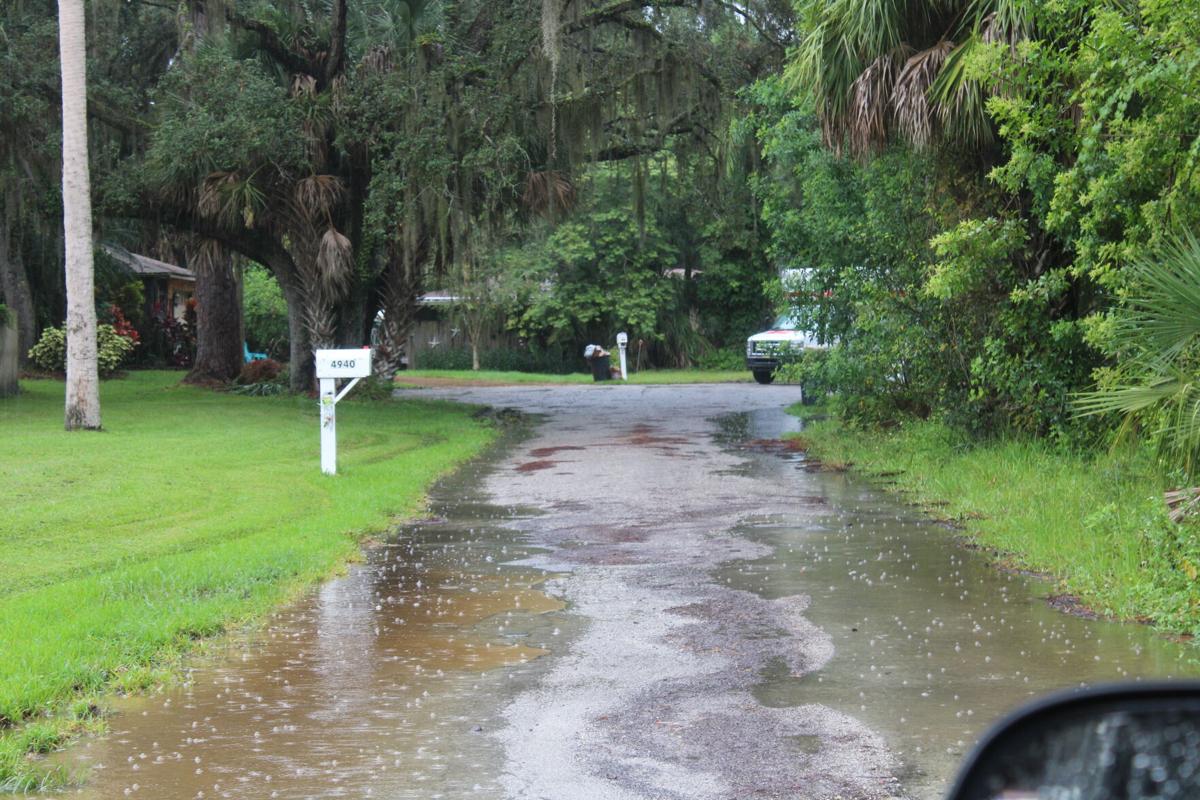 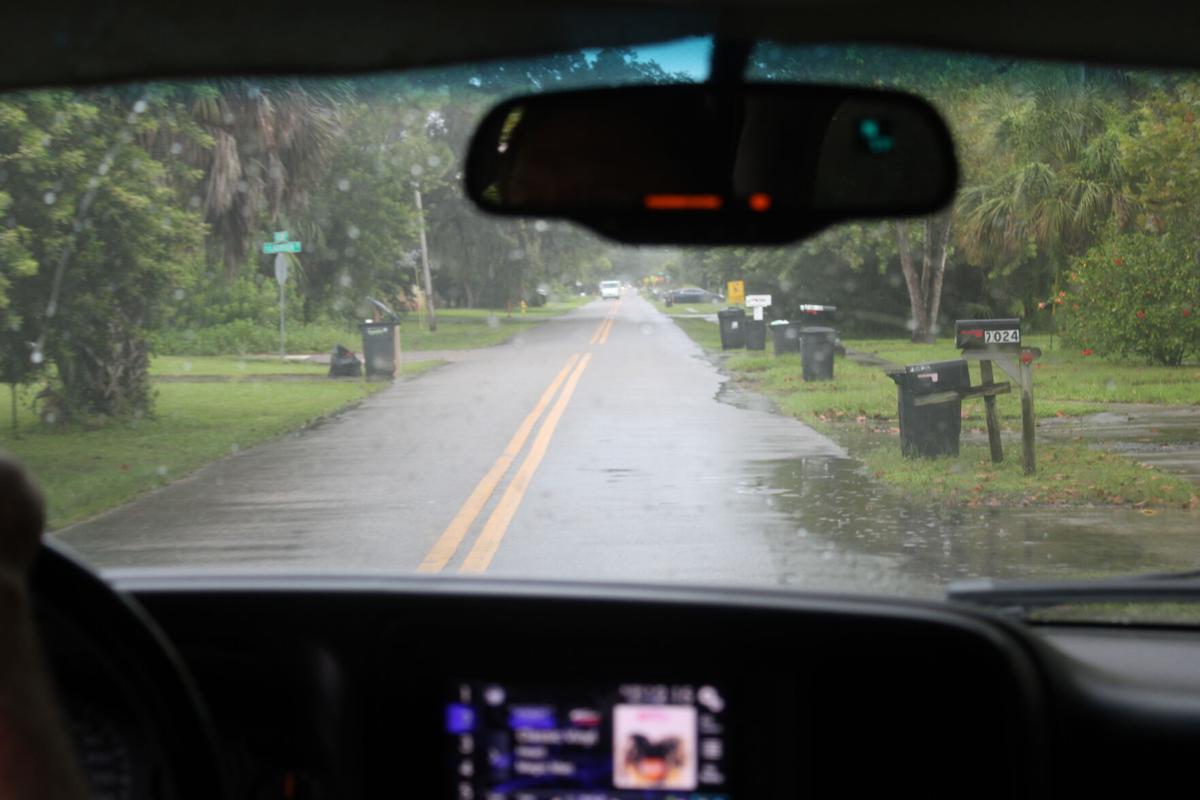 A road maintained by the city of New Port Richey offers a smooth ride and lane markings. 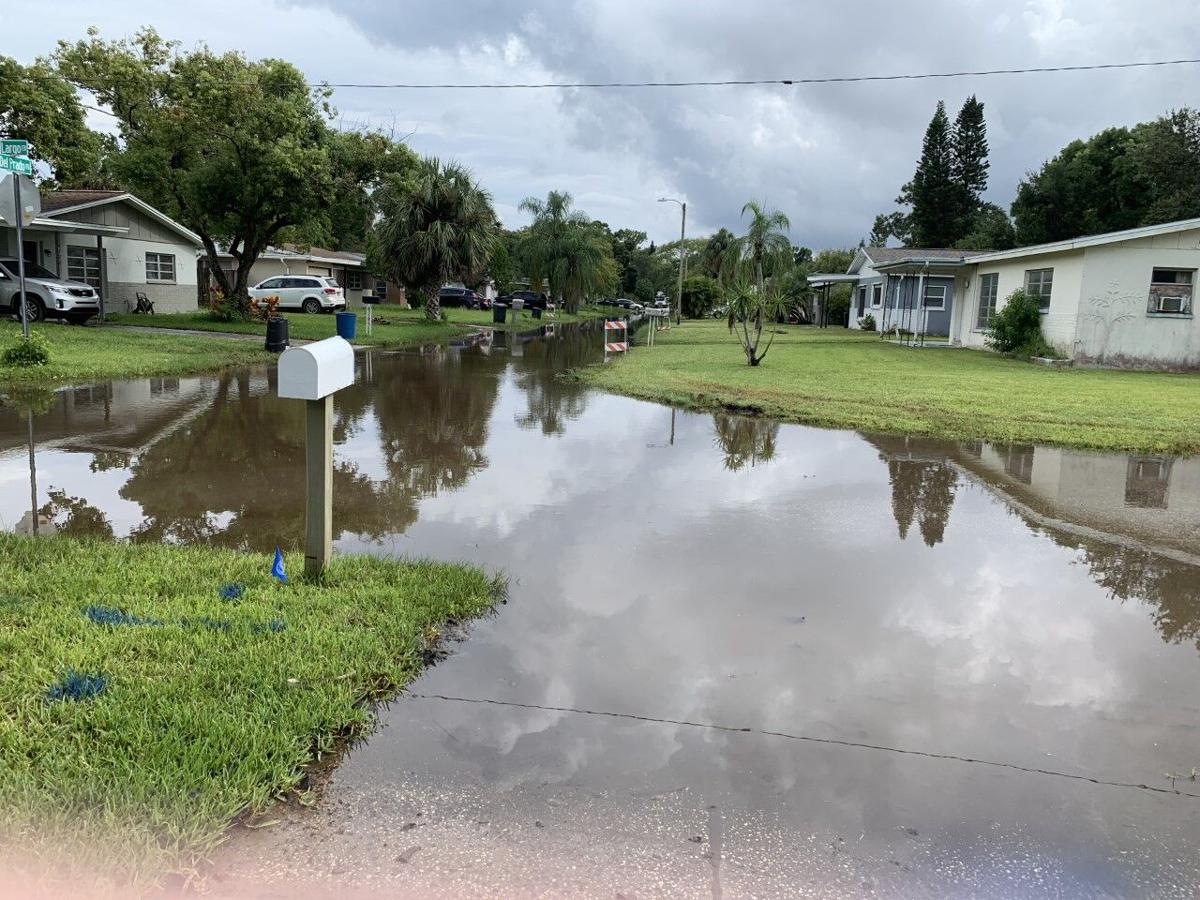 PA-1006-FLOODING13 – A flooded road in the Green Key neighborhood 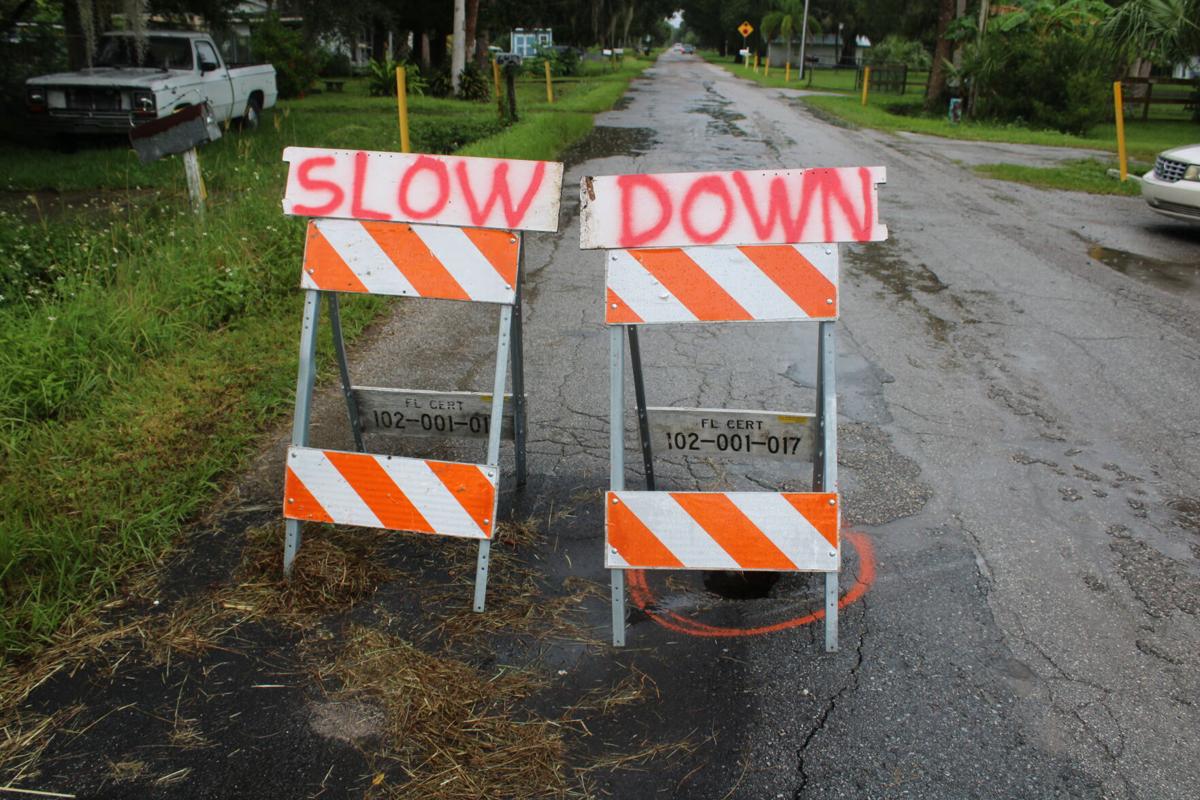 Barricades and signs warn drivers away from holes that have opened in the road.

A flooded road in Green Key.

Residents of the Green Key community gathered in Cheryl Orchard’s house to talk about the flooding problems they’ve been having and their frustrations with the county.

A road maintained by the city of New Port Richey offers a smooth ride and lane markings.

PA-1006-FLOODING13 – A flooded road in the Green Key neighborhood

Barricades and signs warn drivers away from holes that have opened in the road.

Residents of the Green Key Estates community who gathered at Cheryl Orchard’s house on a late Monday morning have just about had it with Pasco County and its Public Works Department.

One by one, about 25 residents stepped up to talk about their problems with flooded roads, impassible roads, ruined vehicles and fears of waterborne diseases in an area that’s admittedly in a “fishbowl,” a low area where the accumulated water from daily rainfall gathers and takes a long time to drain away.

Some have been complaining for as long as 27 years.

“The county blames the city; the city blames the county,” Orchard said. “The city” is New Port Richey, but the streets in question — Manor Beach Road, Del Prado Terrace, Sierra Terrace, most of Green Key Road west of U.S. 19, and Largo Terrace — belong to Pasco County.

Though the rainy season appears to have ended, there are two more months to go in hurricane season and residents worry that tropical weather will again turn their community into a flooded mess.

Robert Rivera, director of public works for the city of New Port Richey, explained that there’s a lot of confusion in that area because the city owns about 600 feet of Green Key Road from U.S. 19 westward, and the county has the rest. In addition, on some roads the county has the streets but the city provides the water service.

Not only that, there are some county roads that are within the city limits, Rivera said.

Residents of Green Key just want someone to take responsibility for their situation. They show up at County Commission meetings, fill out the public comment forms and ask for help.

“‘Mrs. Orchard, I’ve done more for you than anybody,’” she said Mariano told her one time. “Does it look like he’s done anything?” she asked.

At a break during a County Commission meeting in mid-September, Mariano said the county is talking with the city about what can be done.

Later on, commissioners discussed the drainage situation and said they’re trying to set up a meeting with the city.

On Sept. 20, the city sent an email that there will be the Joint Cities/County Fall Workshop between the Pasco County Board of County Commissioners and the west side municipalities from 10 a.m. to noon Tuesday, Nov. 2, at the Starkey Ranch Theatre Library Cultural Center, 12118 Lake Blanche Drive in Odessa.

At the Sept. 28 County Commission meeting, Mariano said that the county has applied for a $2 million grant from the Rebuild Florida General Infrastructure Program for its Green Key neighborhood drainage improvement project.

County Administrator Dan Biles said before the meeting that he and the public works staff are working on solutions.

“It’s not an easy solution,” Biles said of the flooding and drainage issues. “It’s not going to be solved overnight.”

Residents trace the drainage problems to a New Port Richey project to install sewers in 1994. After the roads were torn up and the sewer system was installed, the roads were raised, and that has caused runoff to pool in the community. In turn, that water is ruining the roads and turning them into obstacle courses of potholes and depressions.

Drivers slowly navigate the wreckage of these roads at their own risk, and it’s even worse when the holes are covered with water since drivers don’t know what they’re driving into.

Sarah Suarez of Del Prado Terrace said she’s lived in the community for two years, and has had problems getting out of her driveway because of the flooding.

“There’s a river in front of my house. I live in a really bad spot. I have a driveway that’s damaged from all the water that’s sat there for years,” she said. “You can’t see the road. It rains for 30 minutes, and I can’t see the road anymore.”

She has had to call someone with a larger vehicle to get her out of the house, and added that she can’t walk the dog because there’s no road or sidewalk.

Louis Garcia of Sierra Terrace said the potholes are getting bigger every year. Children cannot walk to school, he said, and have to be driven to the bus stop, or even taken there by boat if the cars can’t get through.

Scott Statland gave a driving tour of the area and highlighted the differences between the city-owned roads and county-owned roads. He steered his SUV down a smooth, two-lane road with a yellow stripe in the middle.

“City road,” he said, referring to the city of New Port Richey.

He stopped and pointed down a rutted, ruined and semi-flooded road with no markings.

He did the same at another intersection.

At the northwest corner of Manor Beach Road and Green Key Road is an abandoned subdivision — “The builder went broke,” Statland said — and he pointed out what he said was a major part of the problem. New construction is built higher, so the water runs downhill and into the community.

Commissioner Mariano has said that work is being done.

In an emailed statement that included a PowerPoint presentation, county spokesman Ryan Hughes said, flap gates have “significantly helped mitigate the tidal flooding since they were installed.”

He added that storm pipes are “regularly checked and cleaned if there are any blockages.”

In the presentation, the county said it finished a neighborhood drainage analysis concept plan in August 2020. The project, which would include acquiring property and easements, would cost almost $1.9 million and would have medium cost-effectiveness. The design and permitting phase is ranked 16th in priority on the five-year Capital Improvement Project budget for fiscal year 2023.

The Orchards have lived in their house on Manor Beach Drive since 1981.

She says what really hurts is what people are saying.