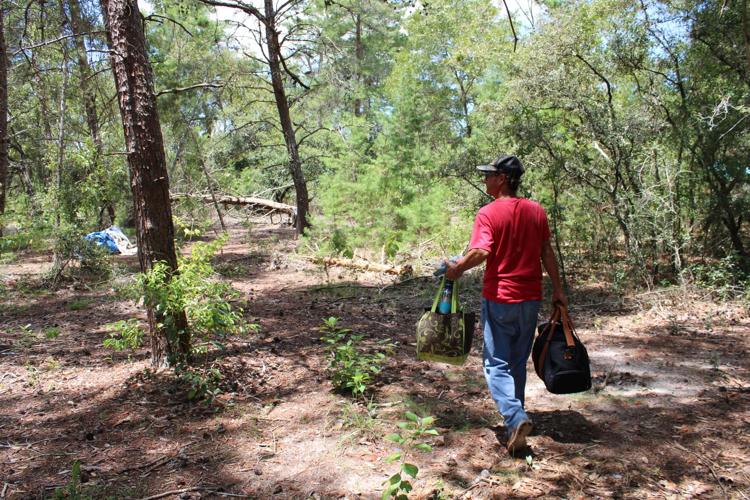 Allen Senesac guides a group of people to his campsite in the woods somewhere in Hernando County. 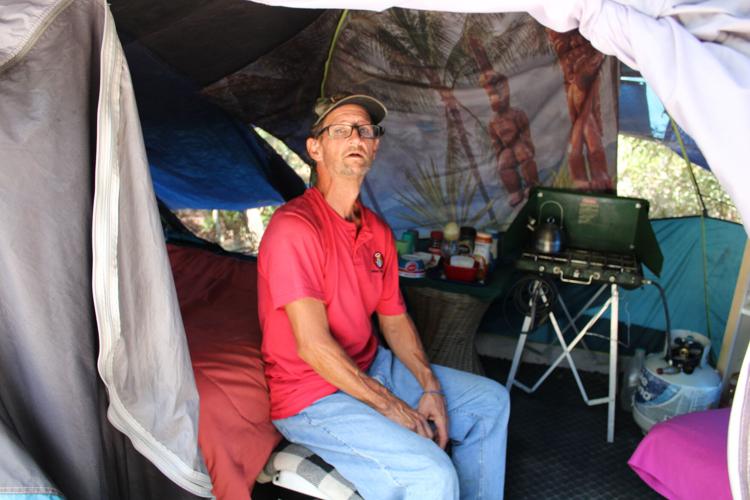 Allen Senesac said he didn’t mind being photographed in the tent. Inside is a bed, an easy chair, a small stove and other items so he can be comfortable. 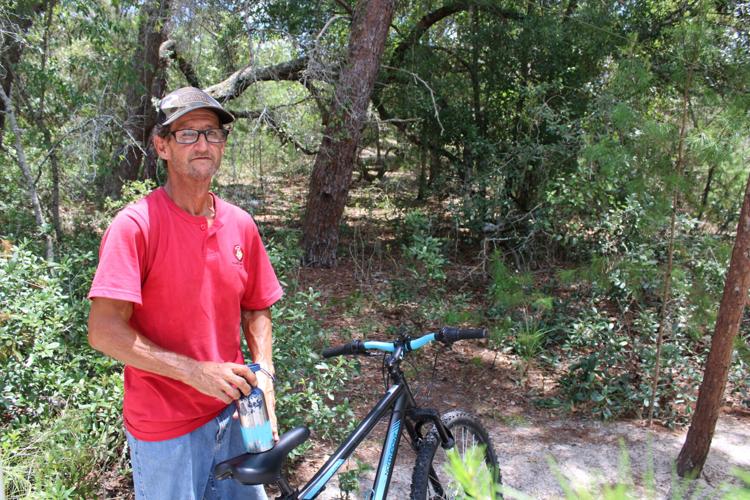 Allen Senesac’s main mode of transportation is his bicycle. 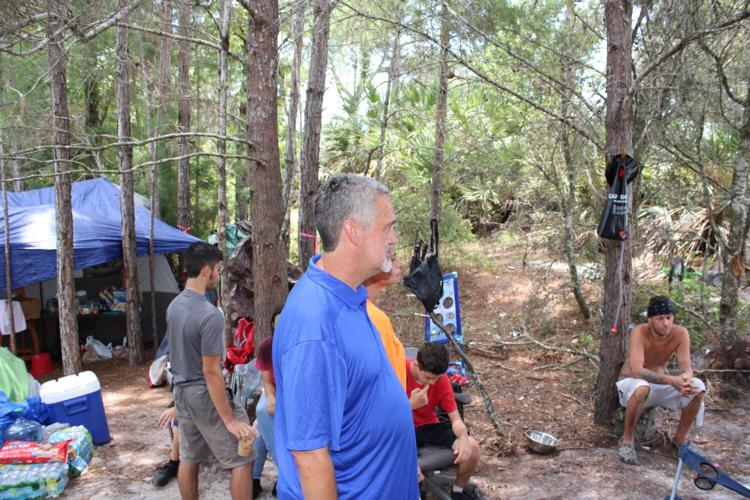 Another family lives in the woods and struggles to survive. The man in the blue shirt makes good money, but they can’t afford a place to live. 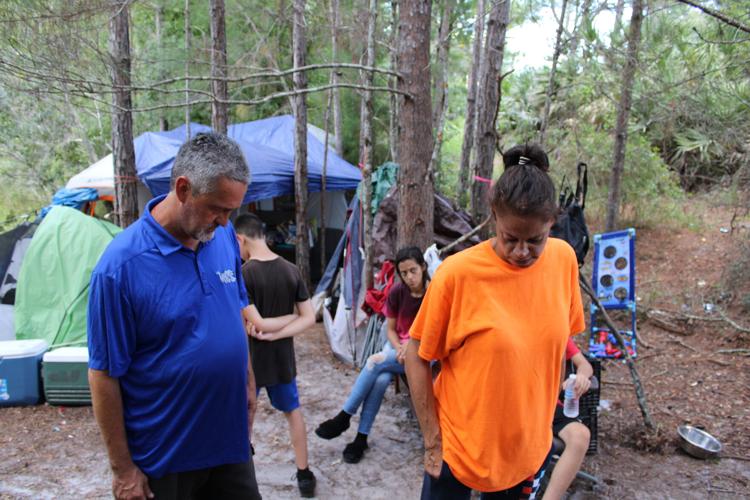 Helping homeless families is difficult because problems have a way of piling up on them and making their lives even harder. Verbal abuse by other people doesn’t help. 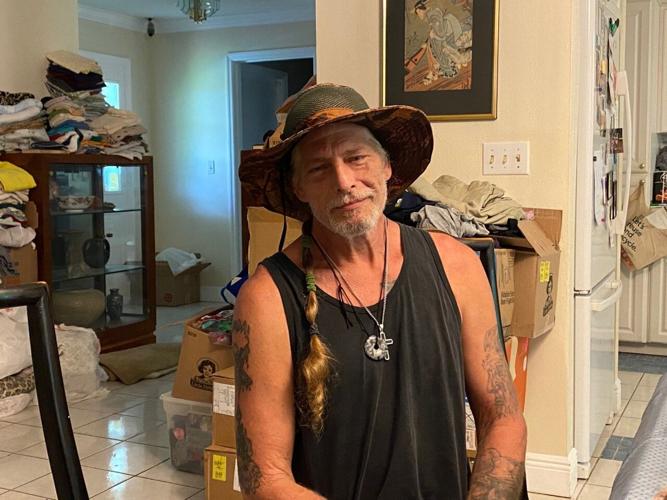 Allen Senesac guides a group of people to his campsite in the woods somewhere in Hernando County.

Allen Senesac said he didn’t mind being photographed in the tent. Inside is a bed, an easy chair, a small stove and other items so he can be comfortable.

Allen Senesac’s main mode of transportation is his bicycle.

Another family lives in the woods and struggles to survive. The man in the blue shirt makes good money, but they can’t afford a place to live.

Helping homeless families is difficult because problems have a way of piling up on them and making their lives even harder. Verbal abuse by other people doesn’t help.

Part Two of a multi-part series

It’s quite a hike through the woods to the place where Stephanie Haller and her husband, Larry, have been camping.

They are homeless, but trying to get their lives back together. It’s just hard when you live outdoors in the searing heat.

The path is treacherous in places, but Stephanie Haller knows it well.

The heat is vicious and the mosquitoes are aggressive. The temperature is in the high 80s and the sky is starting to cloud up, which means a possible thunderstorm and soaked clothing later.

Ellen Paul of Nature Coast Community Services Foundation lags behind with another member of the organization.

You have to be careful when you come back here, Haller said. Most of the folks don’t want visitors, but of course Paul and her fellow activists are welcome, because a lot of people know her and know she’s trying to help them.

The Hallers’ campsite is a mess right now, Stephanie explains, because a “visitor” came by looking for valuables, she said. They’re just getting everything reorganized.

A couple of large tents provide shelter, but there’s no respite from the grinding heat.

“I never dreamed I’d end up homeless,” he said.

Amid all the forced moves, he lost his work tools. Construction workers are expected to use their own tools on work sites, Larry Haller said. He’s hoping to build up a new supply so he can work again in his trade, make a good living and provide for his family.

Paul, the foundation representative, needed a new screen door at her house, so she bought one from Habitat for Humanity’s store and hired Haller to install it.

Family in the woods

In another part of Hernando County, the Powell family (not their real names) has lived in the woods for a few months now.

The husband, Ted, works full-time and makes $20 per hour. The wife, Sarah, is ill and has vision problems. Their oldest daughter is diabetic.

Paul says diabetics have an especially tough time in the heat.

The Powells also have three sons. They homeschool the boys, though that increases the stress on the family. The boys would have access to more services if they went to classes, but they get ridiculed in school and Sarah has her own reasons for wanting them to stay home.

So the school district provides tablets with internet access.

Paul said that in one Spring Hill school, children receiving backpacks of food for the weekend had their names called on the school’s public address system, so all the kids knew who was getting food help.

Shanika Figueroa Rodriguez, coordinator of Students and Families in Transition for the school district, said the district doesn’t control such programs.

“They’re run differently at each school, however they set it up,” she said. “It’s not something that we oversee, so I’m not sure how that exactly works at each school site, which ones have it, which ones don’t, and how they get the backpacks to the students.”

Homeless parents worry the Florida Department of Children and Families will find out about how a child is living and remove the child to a foster home.

For example, Paul said, parents living in the woods cannot have a refrigerator, so they can’t store much food on site. If DCF finds out, she said, they’ll take the kids because the parents aren’t providing enough food.

School district personnel are mandatory reporters of student situations, Rodriguez said, and what happens after that is up to DCF.

A DCF representative was contacted and has yet to respond.

The Powells were told they had to leave a house and were given 30 days. A pay rate of $20 an hour sounds like a lot until you realize that they have four children, a couple of dogs and a couple of cats.

And no savings. And no affordable place to go. And unreliable transportation to get to work.

And no way to come up with several thousand dollars for first month’s rent, last month’s rent, security deposit, fees and so on. Not when you’re living paycheck to paycheck.

On a blistering hot day, a group of visitors came to see the Powells. There was a crisis, because one of the family dogs had a seizure and the emergency veterinarian wanted $500 to treat the dog. Sarah Powell’s voice broke as she said she might have to have the dog euthanized. That was what eventually happened.

People tell the homeless to get rid of their pets, but for many the pets are like emotional support animals. They may have lost everything, but at least Fido and Fluffy are there, especially for the kids.

Paul asked about two women who live in the woods nearby. They were taken by ambulance to a hospital for heat-related illnesses. The homeless often get ejected from air-conditioned places.

The indignities pile up. People tell the homeless it’s their fault; they made “bad decisions.”

Some people voyeuristically drive up, shoot pictures, call them lazy and jobless bums, call them drug addicts and tell them to get a job. When it rains, the homeless have to race to protect their clothing. They don’t have washers and dryers.

Recently, at a Brooksville City Council meeting, a homeless man talked about how he has to save up change to go to a laundromat to wash and dry his clothes, and how much he misses having a roof over his head and a washer and dryer in his place.

Then there are the predators.

The Hallers live deep in the woods, and they have a sign near their things telling other people they don’t belong there if the couple isn’t there. On the day she led a group of people to visit her location, she said she and her husband were still getting reorganized after someone came by and scattered their belongings.

She’s a plain-spoken “Tennessee girl,” she said, and not afraid to tell off the police or anyone else who offends her.

At a County Commission meeting, she broke down in tears, though, describing what’s happened to her. On the dais, Commissioner Beth Narverud seemed the most sympathetic.

Paul, from the Nature Coast Community Services Foundation, says transportation is a problem for the homeless. They’re past living in their car; that was taken long ago. They have a bicycle, and while riding have to dodge drivers talking on cellphones. Stephanie Haller said the day she met with the activists who’ve been helping her that a woman in a car tapped her rear bicycle tire and apologized because she hadn’t been paying attention while driving.

But others on bicycles have been hit and killed, especially at night.

They can’t go several miles for a job because all they have for transportation is a bicycle, and the buses aren’t always reliable or running when needed.

One man, Paul said, was hired for a job in Tampa at $10 an hour for 40 hours, driven down there by the man hiring him, and then after he did all the work was handed a $20 bill and told to take it or leave it.

Wage theft is common for these people, she said. They feel they have no recourse and are so desperate for work, they’ll take their chances with an employer “off-the-books.”

Allen Senesac was supposed to start work at a Burger King, but got a call. The kitchen had a fire, and the place is closed.

“He can’t win for losing,” Paul said, adding this is a man with pride in himself and his living space, and he just needs a place to stay.

Senesac is in his mid-50s but looks older. He has only a few teeth left, but an infectiously positive attitude as he shows his living space in the woods. He has a tent and even a second tent for storage. It’s not uncommon for Paul to visit people and ask them what they need. She buys tents for them.

Inside Senesac’s tent, he has a bed, a place to store food and more. His bicycle is near a tree. There’s a grill outside.

There’s no refrigerator, of course, so canned goods supply the meals.

How did he become homeless?

“COVID, lost a job, lived in my car,” Senesac said. “Well, actually, I was renting a place after I lost my job. Lost that, lived in my vehicle, couldn’t afford it, and it all goes from there.”

He didn’t serve in the military and he’s too young for Social Security benefits. Paul hires him to take care of the landscaping around her house in exchange for a phone so Senesac can find jobs. The outside of her house is well-appointed and well-maintained.

All the homeless want is to be treated like human beings, Paul said.

She is going to rent a house she owns to the Hallers, so they can get out of the woods, have a roof over their heads, get their daughters back and rebuild their lives.

Maybe then, Larry Haller said, people will stop giving him weird looks when he walks into a store.

One Sunday, Paul took Larry Haller to her church and he met with the members.

One woman at the church, it turned out, knew Larry Haller’s father; he’d played drums in a band with her brother.

They talked for a while.

“Do you know what he told me?” Paul asked.