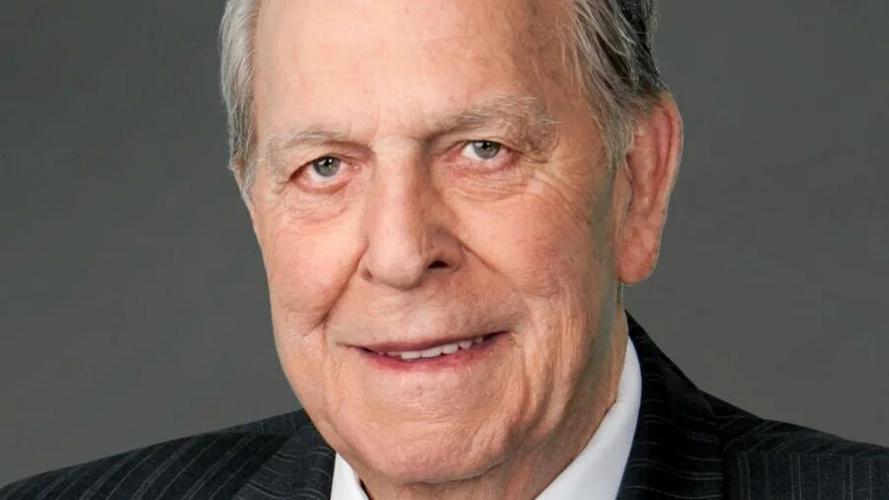 Billy Brown, 88, vice president and general manager for the Withlacoochee River Electric Cooperative, was recently recognized for his service to the community. 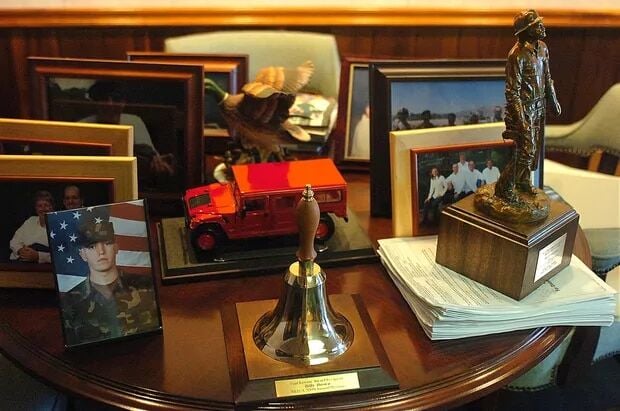 A collection of awards, photos and other memorabilia fill a table in the office of Billy Brown, longtime vice president and general manager at the Withlacoochee River Electric Cooperative. 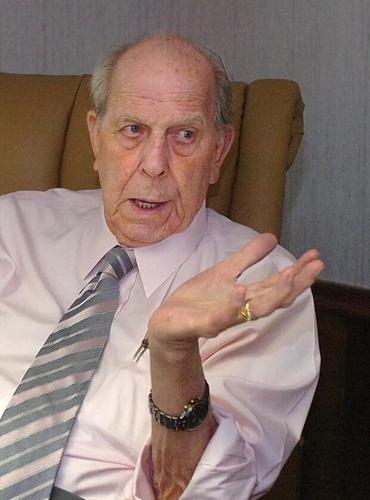 Billy Brown, longtime executive at the Withlacoochee River Electric Cooperative, talks from his office desk about his recovery from a near-fatal shooting accident in December 2011, when his dog caused his rifle to fire and Brown was struck in the leg.

Billy Brown, 88, vice president and general manager for the Withlacoochee River Electric Cooperative, was recently recognized for his service to the community.

A collection of awards, photos and other memorabilia fill a table in the office of Billy Brown, longtime vice president and general manager at the Withlacoochee River Electric Cooperative.

Billy Brown, longtime executive at the Withlacoochee River Electric Cooperative, talks from his office desk about his recovery from a near-fatal shooting accident in December 2011, when his dog caused his rifle to fire and Brown was struck in the leg.

DADE CITY — Billy E. Brown checks all the boxes for being a Pasco County son.

A native of the community, he attended Pasco High School, where he spent one season as first baseman for the baseball team and another as quarterback for the Pirates football squad.

He went away to serve his country in the U.S. Coast Guard, and when he returned home at the age of 23, he took a job in the one place nearby seeking employees, the Withlacoochee River Electric Cooperative. And the place suited him.

“I liked the company philosophy and I enjoyed working there. There also appeared a be a real opportunity for advancement,” Brown said.

Turns out he was right. He started as a lineman earning $1.10 an hour in 1956. His leadership skills were recognized along the way, and by 1973, Brown was named executive vice president and general manager. He still holds that title today 49 years later at the age of 88.

This week the Pasco County Economic Development Council recognized Brown for his leadership in the community. Brown was unable to attend the presentation Sept. 8.

He had been admitted to Tampa General Hospital earlier in the week, but his family filled the stage and accepted the honor on his behalf.

The cooperative, which serves approximately 250,000 customers in a five-county area, up from 3,000 when he started there, is a nonprofit utility. As Brown describes it, the utility takes its responsibility to provide the community what it needs to heart, both in electricity and in public service.

“Mr. Brown moved through many positions to become CEO, and he gives incentives to many others to strive for excellence,” Joe Marina, Withlacoochee River Electric Cooperative district manager, said in a news release about the award. “He has taught me so many valuable lessons that have proven invaluable throughout my career.”

“Mr. Brown’s footprint is forever embedded in Pasco County; he has touched thousands of lives and made a lasting impression on our community. We are privileged to honor Mr. Brown with the 2022 Leadership Award,” said Bill Cronin, Pasco Economic Development Council president and chief executive officer.

Brown has been recognized numerous times before, including with a national award in 2012, the President’s Award from the National Rural Electric Cooperative Association.

A few months before that, Brown got national attention for a different reason — when his bulldog Eli shot him with an automatic rifle on a hunting trip, nearly costing him his life. The dog got excited when a deer jumped in front of the truck they were riding in, and he lunged at the windshield. He landed on the gun, unfastening the safety and hitting the trigger, shooting Brown in the leg.

But Brown healed and moved on, barely skipping a beat in his work. His interest in giving back got started early in his career, as difficult economic times gripped the area.

The cooperative formed an educational foundation in 1997 to help the children of employees afford an advanced education, providing more than $15 million in scholarships since then.

It has also made numerous contributions over the years to organizations such as the Boys and Girls Club; the Vincent House, which provides assistance for people suffering with mental illness; Central Florida State College; and local schools, including a $400,000 donation to the Kirkland Ranch Academy of Innovation, which opened to students this year and provides business and technology training.

Brown has also been personally involved in economic development projects that have created jobs.

Over the years he has worked directly with the redevelopment efforts in Lacoochee, an economically disadvantaged area of northeast Pasco where the cooperative is now working on a rail park project to bring jobs back to the community. He was instrumental in development of One Pasco Center, a business park just east of the Interstate 75 and State Road 52 interchange.

Brown said he is happy to have helped the cooperative make a positive mark on the community.

“We’ve provided thousands of good-paying jobs for the people of Pasco County. And we’ve given a lot of kids the ability to go to school who would otherwise not have been able,” he said.

That mission was ingrained in him from the start. “We’re not just another electric utility,” he said.

As for hanging up his many hats and taking it easy, Brown said that retiring isn’t in his immediate plan. “I really enjoy everything that I do,” he said. “I’m just getting the knack of the job.”