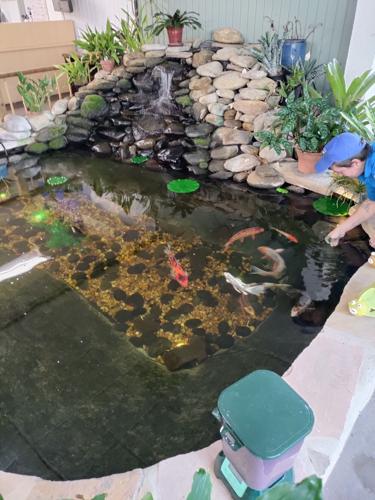 Some of John Chic’s work can be found at the Florida Botanical Gardens in Largo, where he built an indoor koi pond near the gift shop as well as the reconstruction of the Egyptian water garden exhibit. 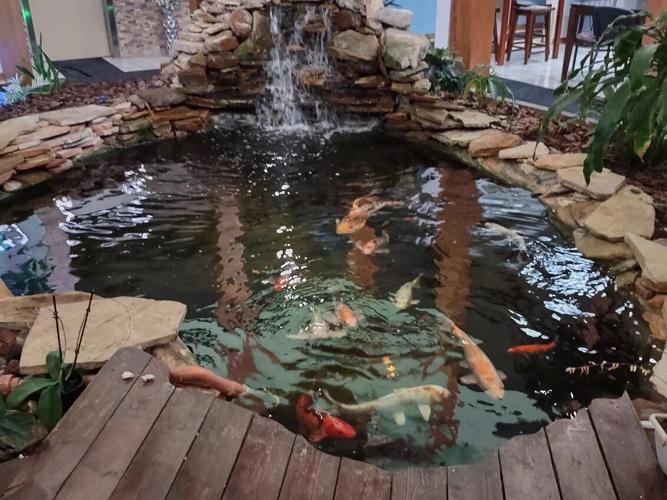 John Chic also created a koi pond in the Clearwater lobby of The Wave, which is a private, women's-only mental health facility hidden away in Clearwater.

Some of John Chic’s work can be found at the Florida Botanical Gardens in Largo, where he built an indoor koi pond near the gift shop as well as the reconstruction of the Egyptian water garden exhibit.

John Chic also created a koi pond in the Clearwater lobby of The Wave, which is a private, women's-only mental health facility hidden away in Clearwater.

His fiery fountains and koi ponds — including the indoor koi pond at The Florida Botanical Gardens in Largo and the Gardens’ Egyptian water garden display — are spectacular displays that prompt eyes-wide-open stares. But Chic also builds residential ponds and fountains.

Chic, owner of Tampa Bay Ponds and Koi in Dunedin, also specializes in the raising, care and feeding of the Japanese koi fish, a sort of brilliantly colored, overgrown goldfish.

But there’s a big difference between Japanese koi and the goldfish in a plastic bag that you win at the county fair. For one thing, the largest goldfish, known as comet goldfish, might grow to 8 inches if you give it time and it stays healthy. A koi can grow to 3 feet.

Koi fish are also more colorful than amusement park goldfish that eventually make their way into local sewer systems after a speedy demise. In fact, it might even be insulting to call koi goldfish despite their evolutionary similarities.

Worse yet, don’t call koi “carp,” even though koi are essentially the same as the well-known bottom feeders. Koi are, in fact, “shiny carp,” according to Chic.

“I don’t know if the koi are insulted if you call koi goldfish,” Chic said. “It’s really up to the owner. I had one client who spent more than $60,000 on three koi. He didn’t spend that money to buy goldfish.”

One difference between koi and goldfish is the “barbles,” or whiskers on koi. The word koi means

“But at the end of the day, they’re carp,” Chic said. “They do well in still water, low oxygen water. They’re an unkillable fish. But they’re very colorful.”

Chic began raising koi as a hobby, the story of how he got into it is prosaic. He was helping a friend repair a koi pond, and he was hooked. He opened his business in 2021 after years as a hobbyist.

He has built koi ponds and his “fire and water” fountains for area actors and athletes but has sworn himself to confidentiality about his more famous clients.

Chic is also dedicated to high-quality projects, and he got into the business because he said he saw too many examples of contractors who do shoddy work.

“I don’t like shady contractors, and I will never be one,” said Chic, who once worked at a shipyard and liked to be the guy who could fix anything.

“If something is ever broken, I fix it,” he said. “I’m offended when I hear about shady contractors who don’t back their work. So many people ask for my help because their contractors won’t do cleaning or repairs.”

Chic said that one popular perception of fish ponds is that they carry an odor. Not so with koi ponds. They also don’t produce mosquitoes because water turbulence needed to produce oxygen for the fish discourages the flying pests from breeding in the ponds.

Chic said most koi can cost about $100 for three, but the larger they get the more they are worth. The asagi koi is Chic’s favorite breed because of its shine and blue coloring. It costs more than your average koi, but they are terrific additions to any koi pond, Chic said.

“They pay for themselves,” he said. “They also add to property values. And as your fish get bigger, if you want to sell them you can make good money.”

As for Chic’s spectacular fountains, he said it’s not so hard to mix fire and water.

“The fire fountains are more art than science,” Chic said. “You can put fire in just about anything.”

It’s a long way from the shipyard, and Chic isn’t sure what drew him into the koi and fountain business. But he has been successful and happy.

“I don’t know what made me do it,” he said. “Call it the universe, call it fate. But it worked out.”