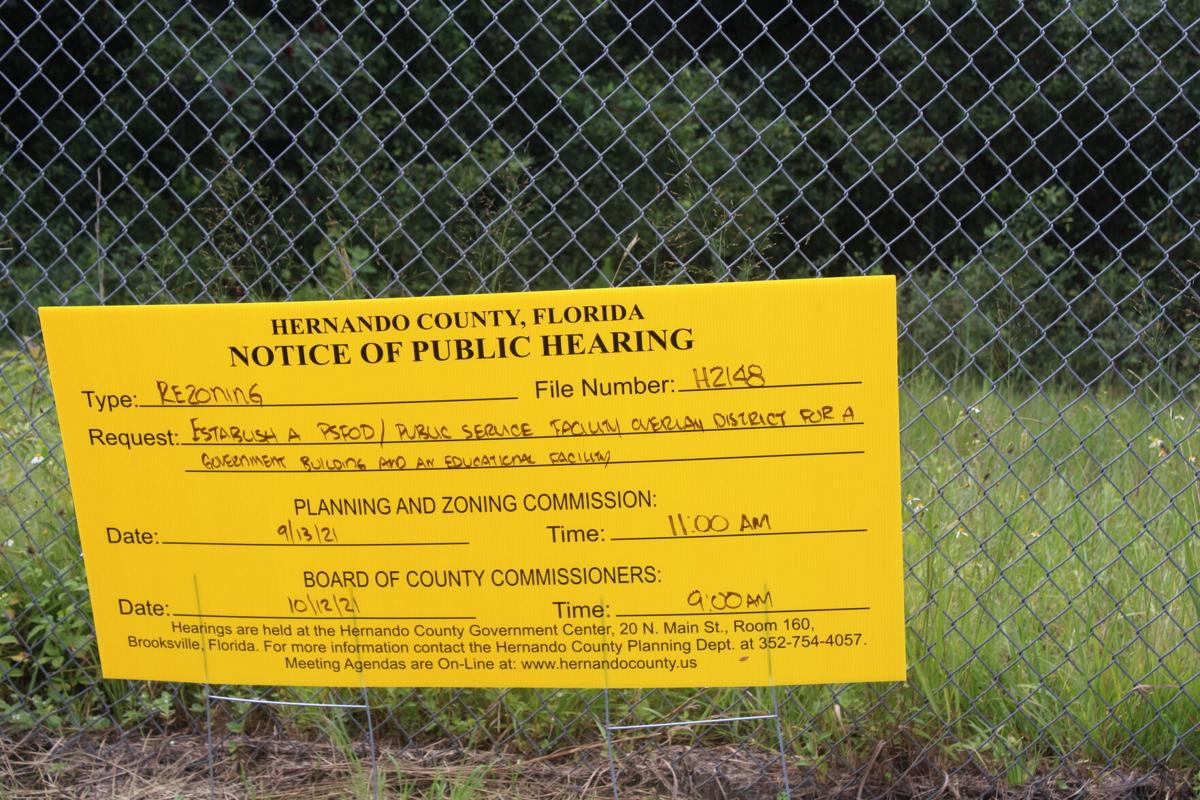 A sign marks the dates and times of government meetings related to a piece of land at the airport where a county government, community college branch and vocational technical school are to be built. 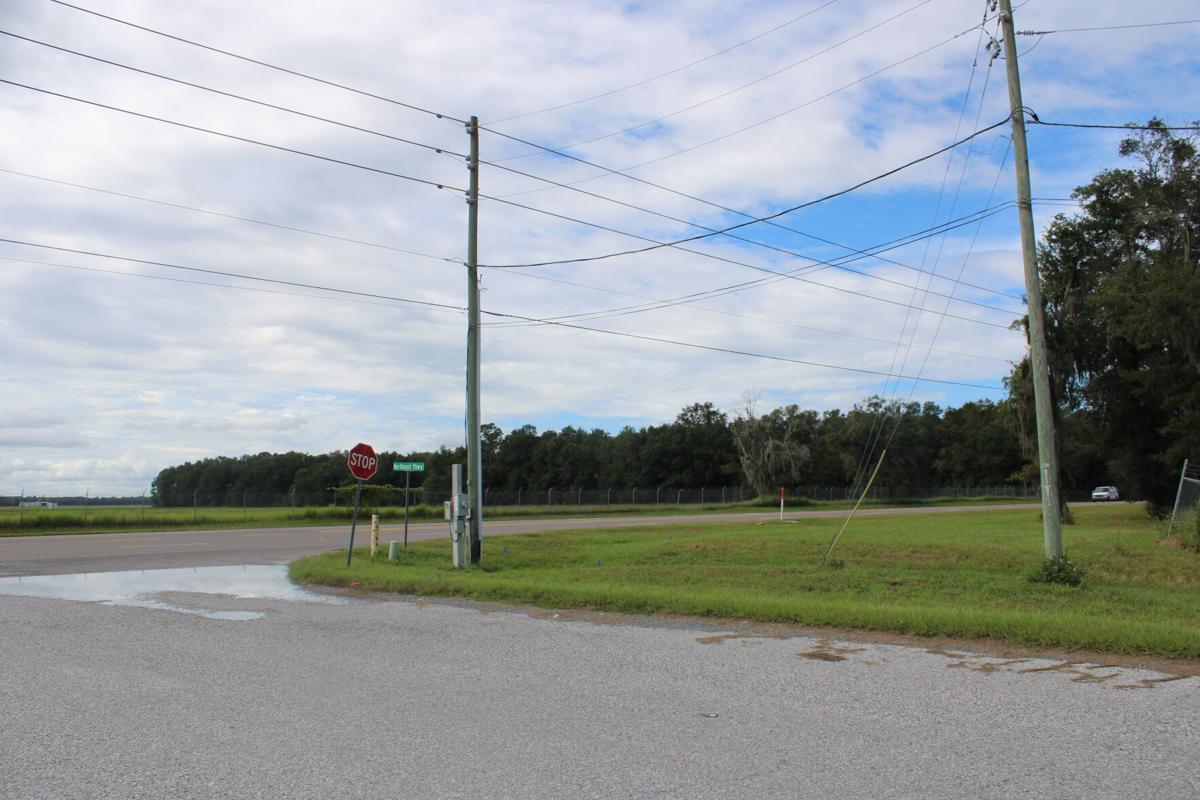 The site at the airport where a county government, community college branch and vocational technical school are to be built. 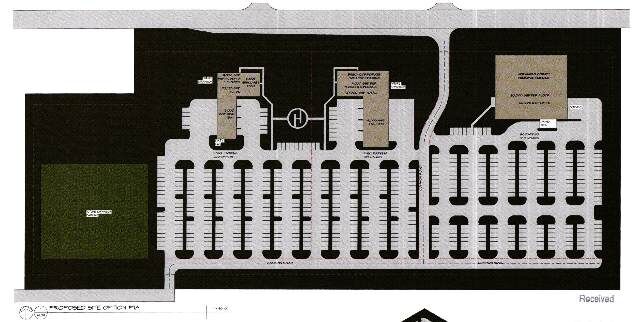 The proposed site plan for, from left, the new tech school, the college and the county building. At top is Spring Hill Drive.

A sign marks the dates and times of government meetings related to a piece of land at the airport where a county government, community college branch and vocational technical school are to be built.

The site at the airport where a county government, community college branch and vocational technical school are to be built.

The proposed site plan for, from left, the new tech school, the college and the county building. At top is Spring Hill Drive.

BROOKSVILLE — The high cost of infrastructure might put a dent in the plans for a vocational-technical school at the Brooksville-Tampa Bay Regional Airport, according to a report from Sophia Watson, the school district’s director of adult and technical education.

According to a story in Hernando Today from July, the Hernando County Commission approved a cost-sharing agreement with the Hernando County School Board and Pasco-Hernando State College at its June 22 meeting. The new school would be constructed on 17.94 acres of land at the airport along with a government center and corporate college.

The state gave a $9.35 million appropriation for the school, but Watson said at a school board workshop on Sept. 21 that more of the money than expected has been consumed by infrastructure costs.

Planning and Zoning asked for things like sidewalks and turn lanes, Watson said, and that brought infrastructure costs of $5.5 million to $6 million.

“We knew we were going to have to pay for infrastructure, but it will cut into whatever cushion we have for that $9.35 million,” she said.

The county has promised to help with obtaining grant money to cover the costs.

“PHSC, the county and us have applied for a grant to help cover those infrastructure costs, and we’ve gotten commitments from the county that they’re going to do everything they can to help with those,” Watson said.

They applied for a Florida Job Growth Grant, she said, and the timeframe for approval seems to range from the next month or two to January.

There are other issues with the land, Board chairwoman Linda Prescott noted, including that there are wetlands and some gopher tortoises that will have to be relocated.

She said the county should have been aware of those issues before it bought the land.

Watson said that in addition to the infrastructure costs, construction costs are rising. Board member Jimmy Lodato said he has been meeting with people who are supportive of the concept of the project and want to make it happen.

He and Watson noted that if they can’t get the vocational school built at the airport, there always is the Central High option, which will cost a lot less but will “water down” the concept if it’s built off the airport.

Lodato said he talked to state Sen. Wilton Simpson about the situation. “We can’t build a location, I told Sen. Simpson, for $6.5 million, and expect it to be viable,” Lodato said.

They looked at Central High as an alternative, and it would cost $681,000 to build it there.

Simpson asked if it was close enough to the airport, and Lodato said it was, but that they’d like to build at the airport property.

“The advantages of being at the airport are extremely good, but I was real emphatic with the people there that we were not able to spend that kind of money and put that location at the airport,” Lodato said.

Another option is to ask for more money, he said, with the explanation that construction costs are rising each month and that they had no idea when they first asked for money that costs would soar like they have. Simpson is excited about the project, Lodato said, noting that he is confident that Simpson will bring in the money they need.

There will be a “signing ceremony” at 9 a.m. Thursday, Sept. 30 at American Aviation, and then participants will go across the street to unveil the sign.

Lodato said Sept. 22 that he hoped to see a groundbreaking by March 2022 on the school district’s part.

“We’re all moving forward,” he said, on the project that he’s been working on since 2014 and is very excited to see come to fruition.

Superintendent John Stratton gave details on the new state testing decisions. The FSA will go away the year after next, he said, but all testing is not going away right away.

“Everything is still in place and everything counts,” he said.

Much testing remains in place, and the plan appears to be to have one company for the state’s progress monitoring, which might save the district money if the state picks up the whole cost.

In the financial realm, the district faces the loss of “sparsity funds” of $2.2 million to $2.3 million, which will have to be made up in next year’s budget.

“Sparsity is a supplement given to districts with enrollment that is under 24,000 and with four or fewer high schools,” said Karen Jordan, the district spokeswoman. “Hernando has five high schools, but I believe we were grandfathered in due to enrollment. Student enrollment is up and we expect growth to keep us over 24,000, so Hernando will lose the sparsity supplement of $2.3 million in 2022-2023. For several years, we have lobbied to have the sparsity supplement become a permanent change in law and not an adjustment made each year.”

In a memo, Stratton said the state told the district the cost, effective Oct. 8, will be a total of $9.7 million. This has hit other districts, too, he said.

“We get adjustments all the time, but not like this,” Stratton said. It will cost the district $4.7 million and he said he will meet other superintendents the weekend of Sept. 25-26 and hear their reaction.

“We are having a hard time understanding what just happened, and why,” Stratton said.

Some counties are going to lose $20 million or $30 million, he said.

Stratton had some good news about the COVID situation.

That’s been the case in other counties, Prescott said.

“It’s great news,” Stratton said. “We all hope it holds out.”

He added that parental opt-outs for masks total 6,752, or 30% of the student population.

• The board approved 5-0 a proclamation declaring the first two weeks of October as Disability History and Awareness Weeks.

• In the consent agenda, the board approved on a 5-0 vote measures to increase the pay of Hernando United School Workers by $1 per hour; approved the Teacher Salary Increase Allocation plan for 2021-22; and approved the purchase of group health insurance for $19 million from Blue Cross Blue Shield of Florida.

• Members of the public spoke against the pay raise for school workers, against sex education, against Critical Race Theory, against COVID protocols and quarantines, and against limitations on public comment.