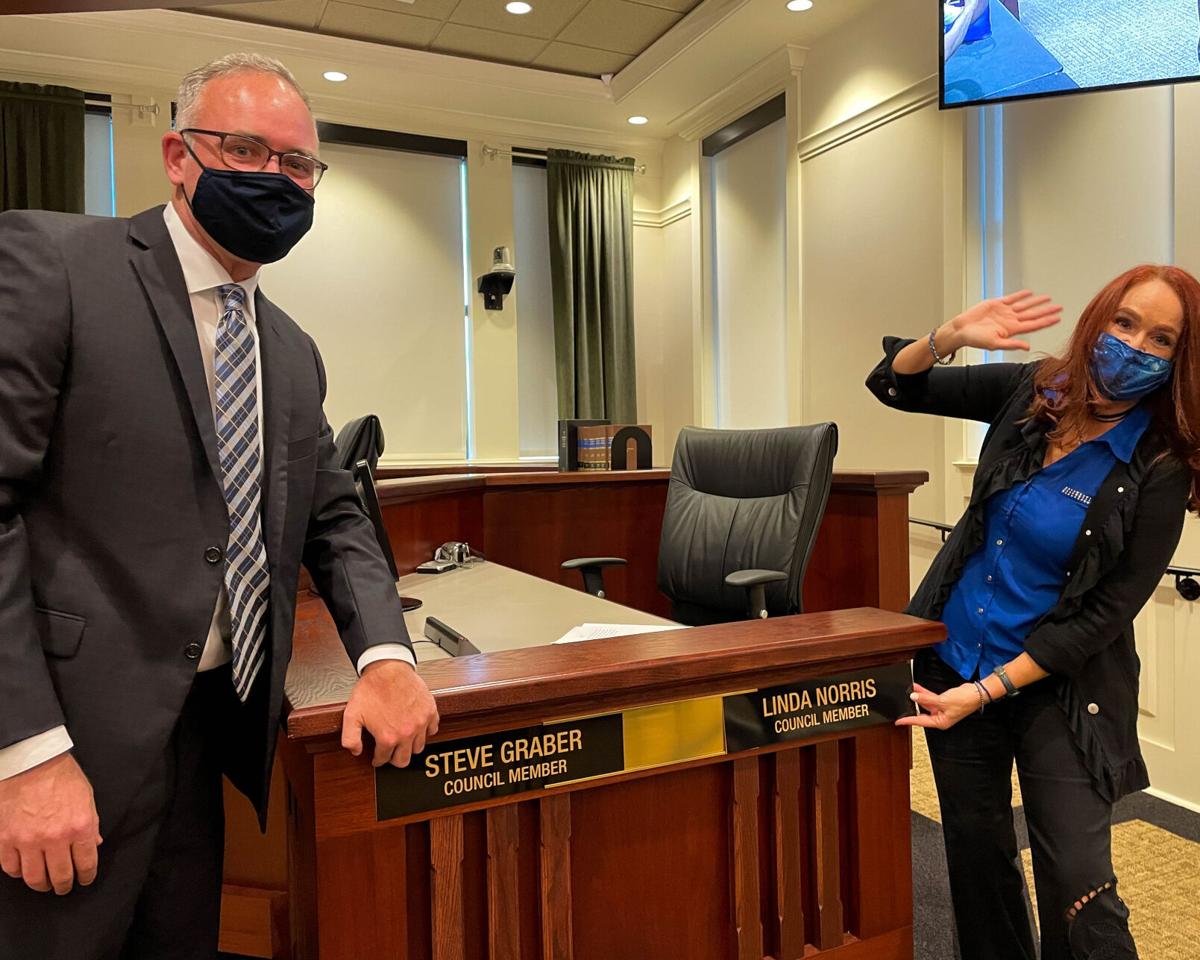 Oldsmar Seat 1 winner Steve Graber swaps nameplates with outgoing Seat 1 holder Linda Norris after Graber was sworn into office March 16. Norris, who served three terms on the council over the past decade, termed out of office this year. 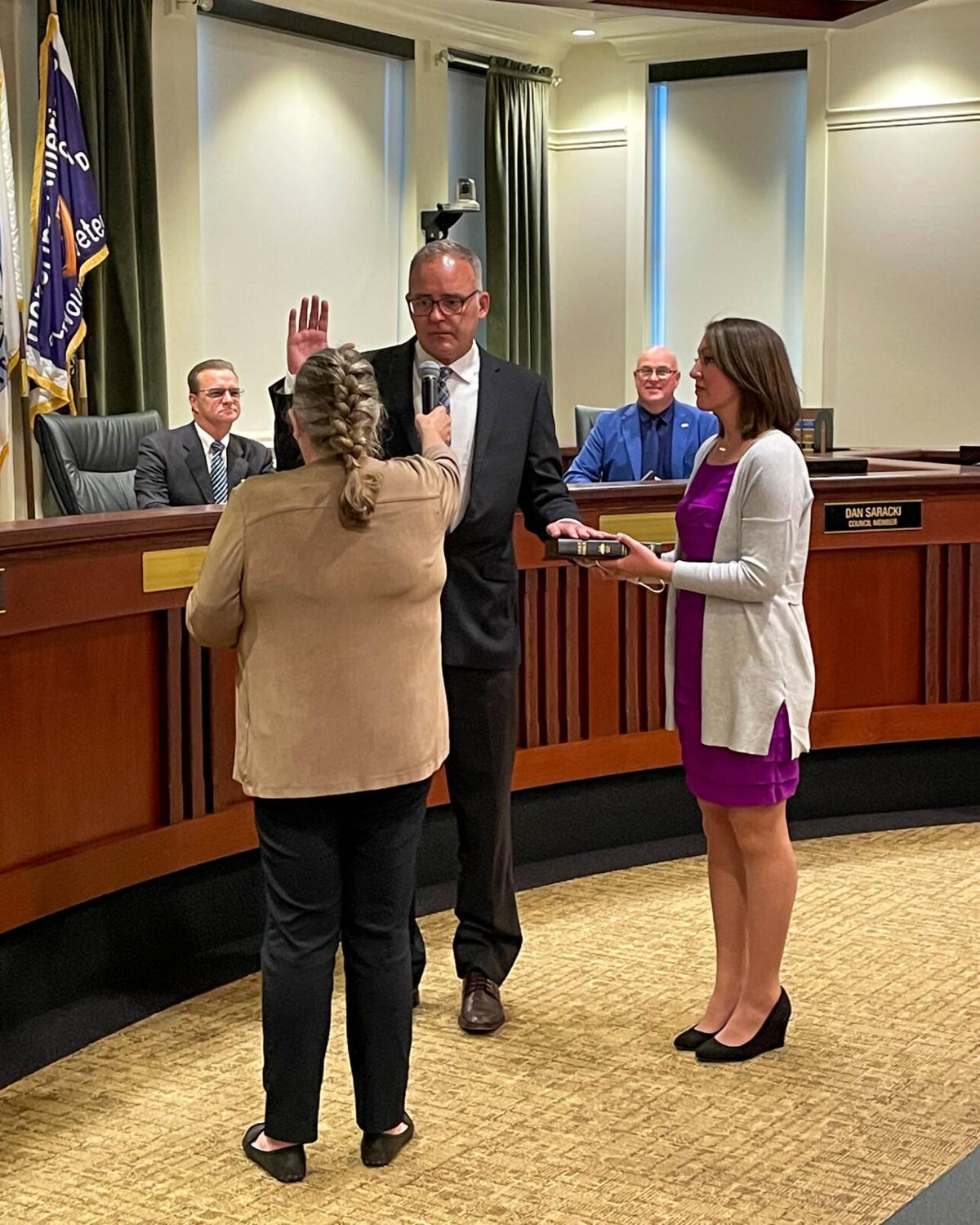 Oldsmar City Council Seat 1 winner Steve Graber is sworn in by City Clerk Ann Nixon on March 16 as his wife, Kelly, watches. Graber won a close contest by eight votes over challenger Pamela Settle, a decision that had to be confirmed by a machine recount three days after Election Day. 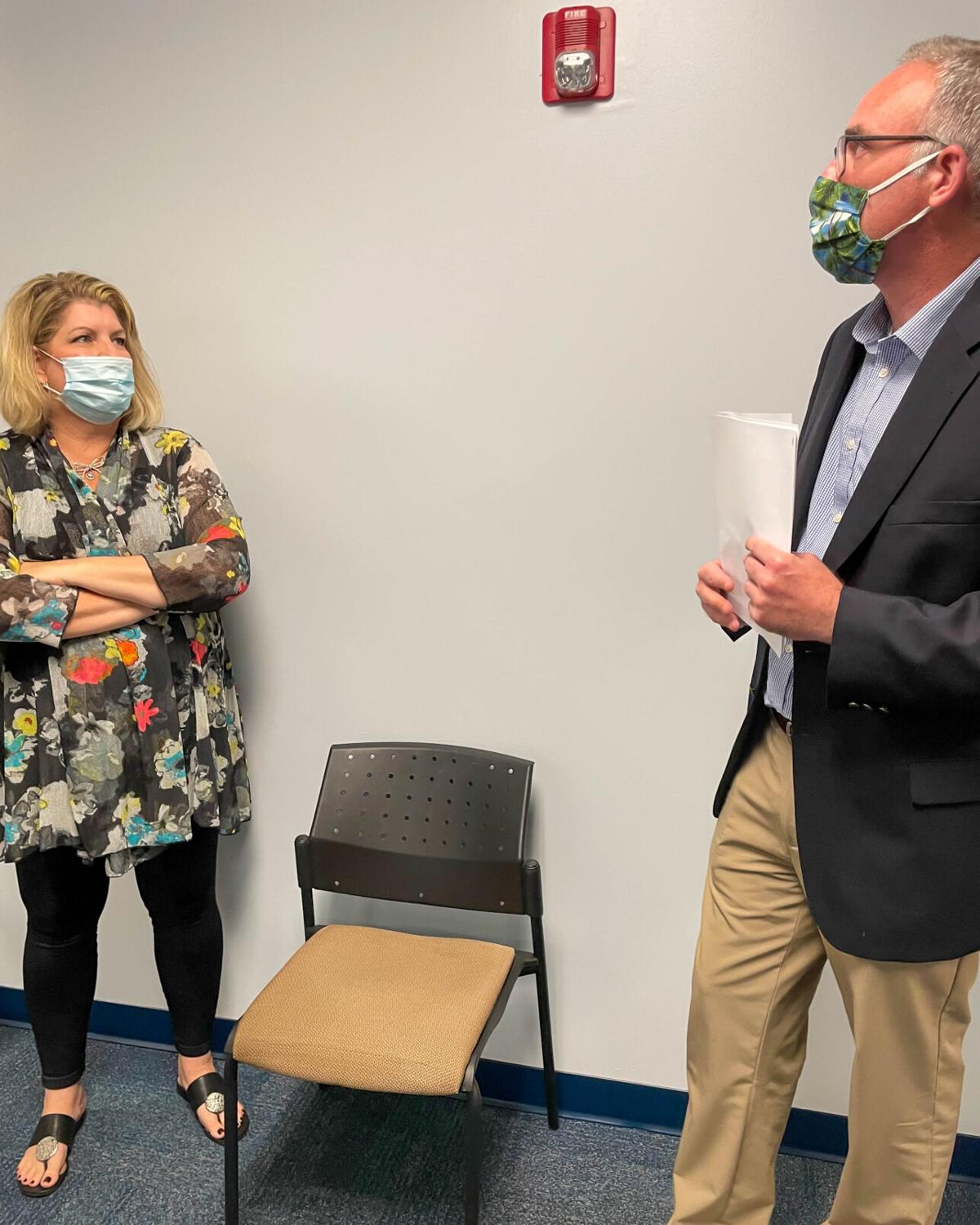 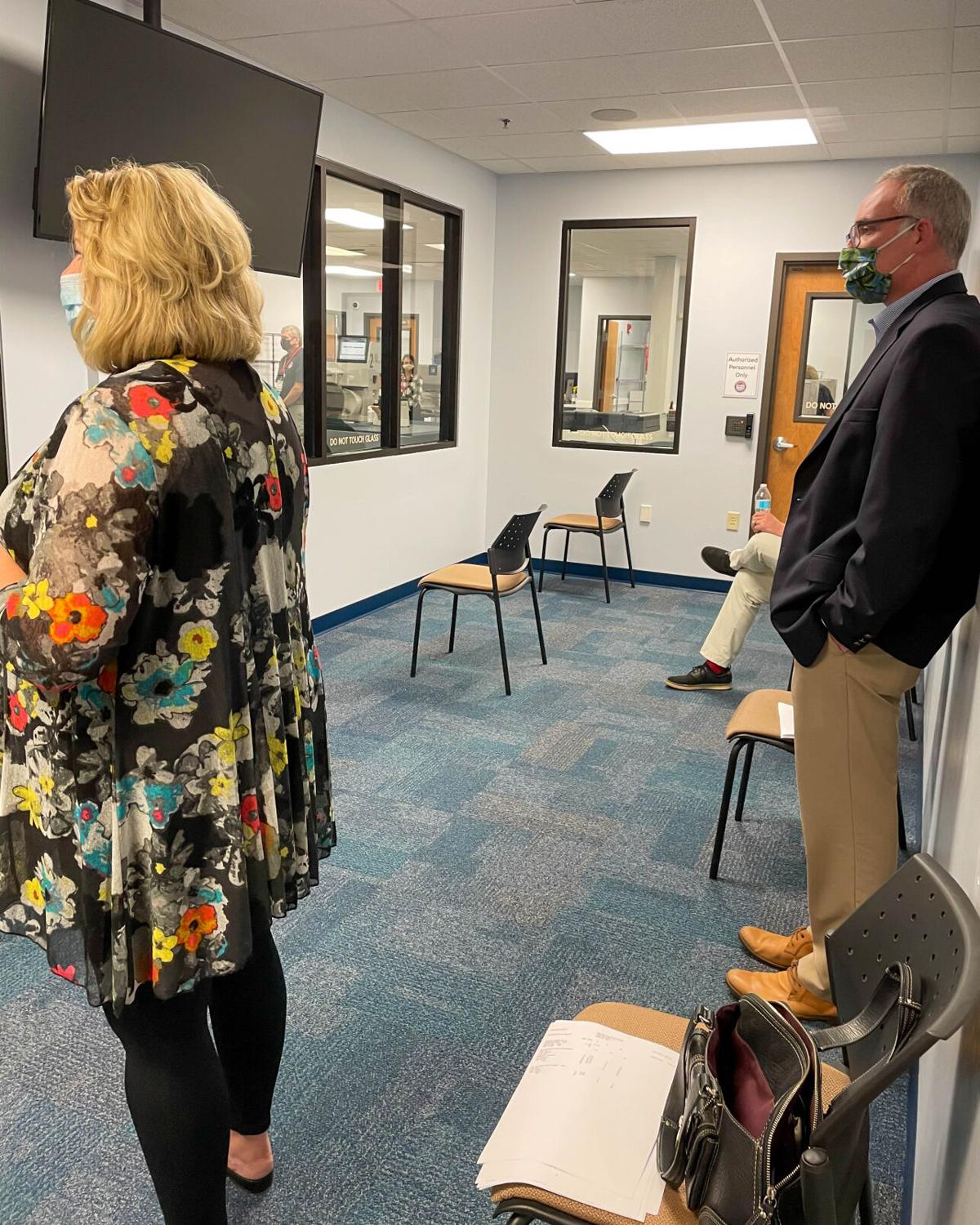 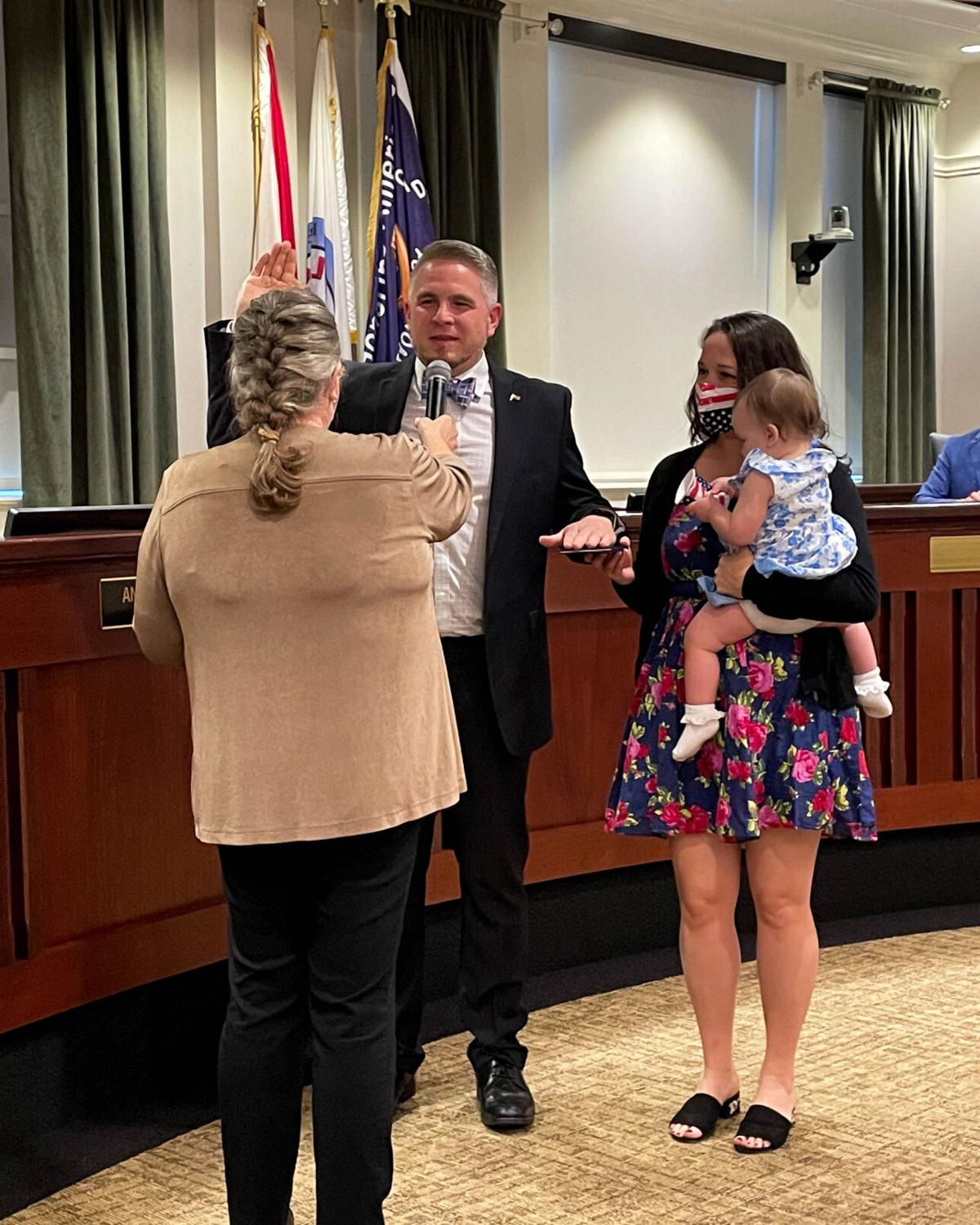 Oldsmar Seat 1 winner Steve Graber swaps nameplates with outgoing Seat 1 holder Linda Norris after Graber was sworn into office March 16. Norris, who served three terms on the council over the past decade, termed out of office this year.

Oldsmar City Council Seat 1 winner Steve Graber is sworn in by City Clerk Ann Nixon on March 16 as his wife, Kelly, watches. Graber won a close contest by eight votes over challenger Pamela Settle, a decision that had to be confirmed by a machine recount three days after Election Day.

But when the attorney and married father of two learned he would have to wait three extra days to find out if he officially won the race for Oldsmar City Council against his Seat 1 opponent, Pamela Settle, following a too-close-to-call vote total on March 9, he admittedly was ready for the waiting to be over with.

“I can’t give any comment since the vote is so close,” Graber said by phone on Election Night, adding he was in “need of some sleep and for it to be Friday.”

On March 12, the Pinellas County Canvassing Board, led by Supervisor of Elections Julie Marcus with both candidates as well as Oldsmar officials present, certified the Election Day results, with 1,040 votes cast for Graber and 1,032 for Settle. Four days later, Graber was sworn in by Oldsmar City Clerk Ann Nixon, capping a whirlwind campaign that eventually turned out exactly the way he’d always hoped.

“Trying to articulate how I feel right now is difficult because of all the emotions I went through last week,” Graber said following the March 16 ceremony. “But the total was 1,040 to 1,032 on Tuesday and it was 1,040 to 1,032 on Friday, so it proves our election process in Pinellas County works.”

According to Nixon, the margin was the second-closest in the city’s 105-year history, trailing only the 1994 race for Seat 3, where Tom Pinta won by seven votes over Richard Schauseil.

Nixon noted that had the machine recount necessitated a hand recount, and if the hand recount had fallen under the acceptable margin for error, the winner would have been chosen by drawing a name.

“If it was a tie, there’s no provision in our charter for that, and Florida statute states we would have to draw a name to determine the winner,” Nixon said as she exited the Supervisor of Elections Office in Largo. “So, I intend to ask the charter review committee to put in a provision for ties so it doesn’t happen in the future.”

The narrow margin of defeat did little to console Settle who, after the official results were presented by an SOE official, shook her opponent’s hand and wished him luck moving forward.

Afterward, Settle shared her thoughts on what was an eye-opening first foray into local politics.

“Throughout the campaign, I reassured voters I was running on behalf of Oldsmar citizens and businesses, and that I believe in open government and citizen involvement,” she said via email. “In return, they shared their thoughts, ideas and hopes with me, and on election day, 49.81% of the 2,072 voters indicated they wanted my style of leadership and experience to represent them on the city council. I am deeply appreciative of their support and want them to know I remain committed to staying on top of city issues, especially as the city reviews development plans that can be transformational for the downtown area of Oldsmar.”

Seat 3 winner Andrew Knapp, who was ran unopposed, was subsequently named to serve as vice mayor by Mayor Eric Seidel. After the new council members were sworn in, Seidel spoke about the tight race for Seat 1.

“The elections were a classic example of how much everyone’s vote counts,” Seidel said via email. “Both Steve Graber and Pam Settle did an outstanding job campaigning and getting their message out to our citizens, the proof being how close it was in the end. I think our elections people and Supervisor of Elections Julie Marcus deserve credit for that fact the results did not change by one vote in the automatic recount. It keeps the confidence high in the election process.”

Seidel also said he was looking forward to working with the new council as they bid farewell to longtime member Linda Norris, who termed out of office after serving her third council term.

“Every time a council member leaves, and a new member joins the City Council, it makes for a new dynamic,” he wrote. “New council member Graber and former council member Norris are both different in their style and experience, but I expect Steve will be prepared, ready to tackle the pressing issues and make contributions to the city’s success early. The team will form naturally as we all work together in the coming months. It’s part of the fun side of serving.”

As for Graber, he said he was happy the race and recount were over and he could begin fulfilling his lifelong dream.

“I’m breathing a giant sigh of relief,” he said, adding he was “just excited to get to work.”