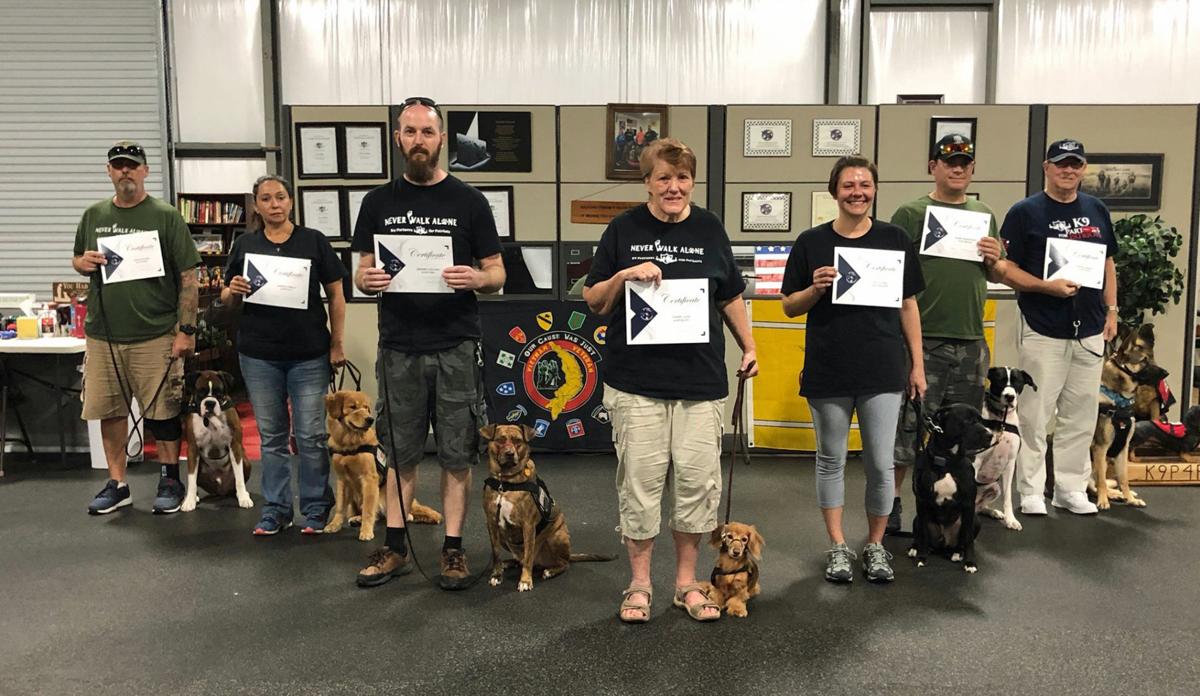 Graduating class of K9 Partners for Patriots; newest teams to complete the program. It was designed to help those veterans afflicted with combat related PTSD from return to a relatively normal life. 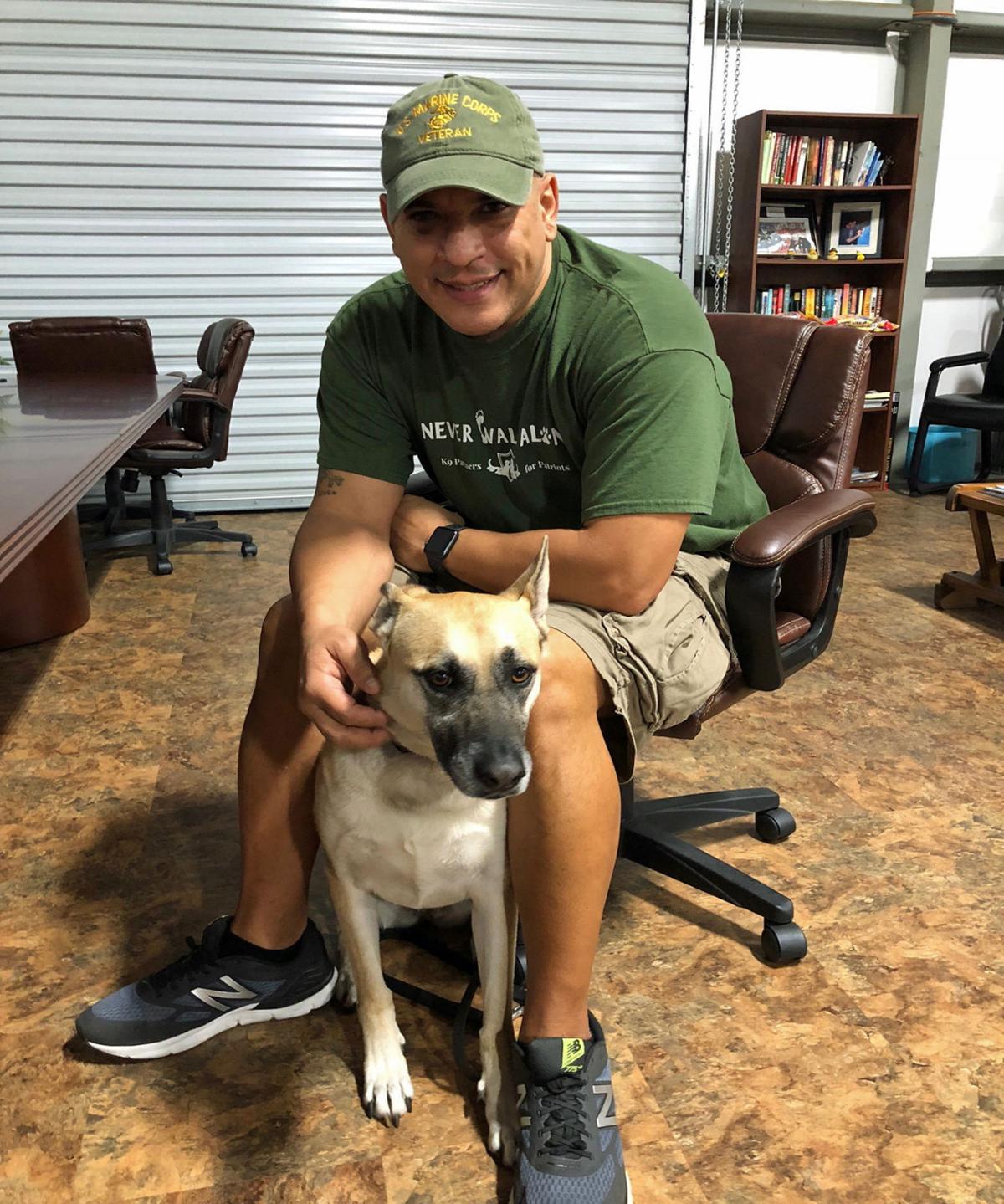 Wil Del-Valle was paired with Bella in 2016 through K9 Partners for Patriots when his combat-related PTSD became nearly impossible to manage. He now interviews veterans for the program. 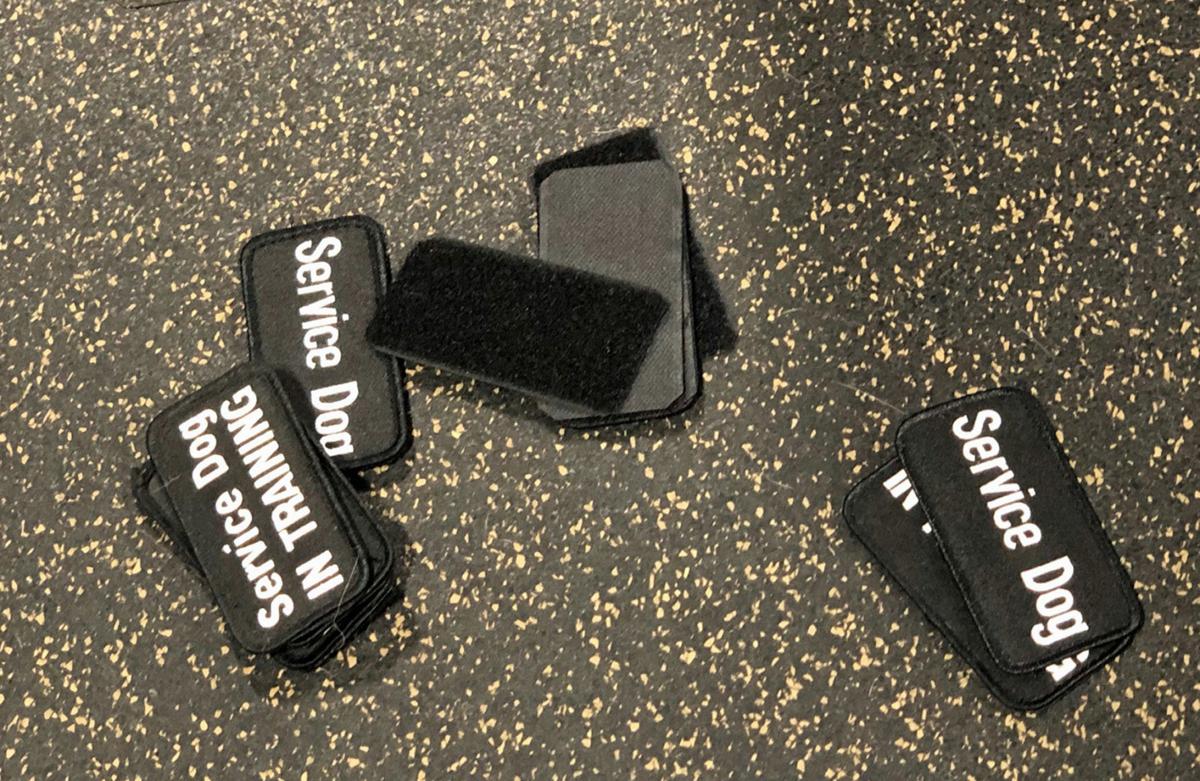 Graduates of the program through K9 Partners for Patriots received new patches for their service dog vests, identifying the dogs as fully accredited.

Graduating class of K9 Partners for Patriots; newest teams to complete the program. It was designed to help those veterans afflicted with combat related PTSD from return to a relatively normal life.

Wil Del-Valle was paired with Bella in 2016 through K9 Partners for Patriots when his combat-related PTSD became nearly impossible to manage. He now interviews veterans for the program.

Graduates of the program through K9 Partners for Patriots received new patches for their service dog vests, identifying the dogs as fully accredited.

SPRING HILL — When he left for Iraq on his first deployment in 2003, Staff Sgt. C, not his real name, was young, tough and eager to serve his country. When he returned to civilian life eight years later, he was different. Fearful, agitated, reactive and easily triggered into rages, C struggled to reclaim the life he’d lost.

His family suffered. His wife didn’t know how to help him. And his children were afraid. Financial ruin was a very real probability because he couldn’t find or keep a job.

C was diagnosed with combat-related PTSD.

“Among veterans returning from the current wars in Iraq and Afghanistan, PTSD and mild to moderate traumatic brain injury are often linked and their symptoms may overlap. Blast waves from explosions can cause TBI, rattling the brain inside the skull.”

Wil Del-Valle served in the Marines, and he, too, developed PTSD after returning to civilian life. He now helps evaluate candidates for K9 Partners for Patriots, a nonprofit, tax-exempt organization in Hernando County that places and trains service dogs for veterans diagnosed with PTSD.

Symptoms of PTSD symptoms can be subtle and might include:

• Avoidance of places and things that trigger memories of what happened.

• Feelings of worry, guilt, or sadness.

• Thoughts of hurting one's self or others.

The group K9 Partners for Patriots places rescued dogs with veterans who have been clinically diagnosed with PTSD, Traumatic Brain Injury or Military Sexual Trauma. Del-Valle was a client who, along with Bella, completed 19 weeks of training. Bella received her credentials as a service dog in 2016.

Before obtaining Bella, Del-Valle struggled with everyday tasks most don’t think twice about. Grocery shopping, eating out, even getting together with friends was a challenge.

Del-Valle was open with his story, discovering K9 Partners for Patriots and his experience with Bella, a taupe colored wolf shepherd that change his life.

“The hardest part was actually coming in through the doors,” Del-Valle said. “I sat out in the parking lot for a while.”

Much of his apprehension, he explained, centered on the political roadblocks of the VA. Like many veterans seeking help, red tape and consistent rejection became an uncomfortable expectation for him. “Constantly being told ‘no, no, no’. Not knowing whether this program was associated with the VA.”

He struggled through the interview until he became at ease and was rewarded acceptance into the program. And Del-Valle was matched with Bella, a Belgian Mountain mix, who has rarely left his side since Dec. 6, 2016.

Del-Valle is an example of how properly trained service dogs can help suppress or even eliminate some of the most horrific symptoms of PTSD in war veterans.

“I’m at the point where I don’t need her as much as I did,” he said. But in the beginning Bella accompanied him everywhere. One definite experience with the program is that the veteran and his or her service dog will become objects of constant attention.

Although he was apprehensive, he now praises his experience. “You get out what you put in,” he said.

Many veterans need a few visits before they are ready to join the program, explained Greg Laskoski, communications director for K9P4P.

Veterans who qualify are partnered with a canine that passes its own criteria. Then they train in a group setting for nineteen weeks, working on skills that allow the handler to re-enter a more normal way of life. The training program works in stages toward the team’s certification as service dogs.

K-9 Partners for Patriots founder Mary Peter molded the program to fit the specific needs of the veterans she serves, beginning with the first meeting in a friendly, non-inhibiting room.

The teams train in groups once a week but are expected to work outside of their scheduled classes at least two hours a day in 10-minute increments. Skills practiced include commands like sit, stay, down, and learning to interact in public places.

The facility, which moved to its new location on Aviation Loop Drive, off Spring Hill Drive, earlier this year, has specific training rooms and mock situations where teams can practice in a confined environment. They are also taken out into the community to further enforce the skills required before earning certification and their service dog vest.

Teams work through specific scenarios, Laskoski explained. It is very likely that the veteran and canine will be approached while out in public. They practice how to answer questions, especially those from people ignorant to the program.

K9 Partners for Patriots places many of the dogs with their veteran partners. They are rescues or surrenders who are evaluated for specific temperament, behavior and ability to react positively to the veteran’s PTSD.

Del-Valle’s positive experiences now help other veterans. He interviews those seeking assistance and provides direct insight based on his own experience.

K9P4P is dependent on grants and generous donations to continue providing the valuable, life changing services to veterans. For those interested in learning more, to apply for a service dog or to volunteer time or donate money, visit their website at https://k9partnersforpatriots.com.

K9 Partners for Patriots is at 15332 Aviation Loop Drive.