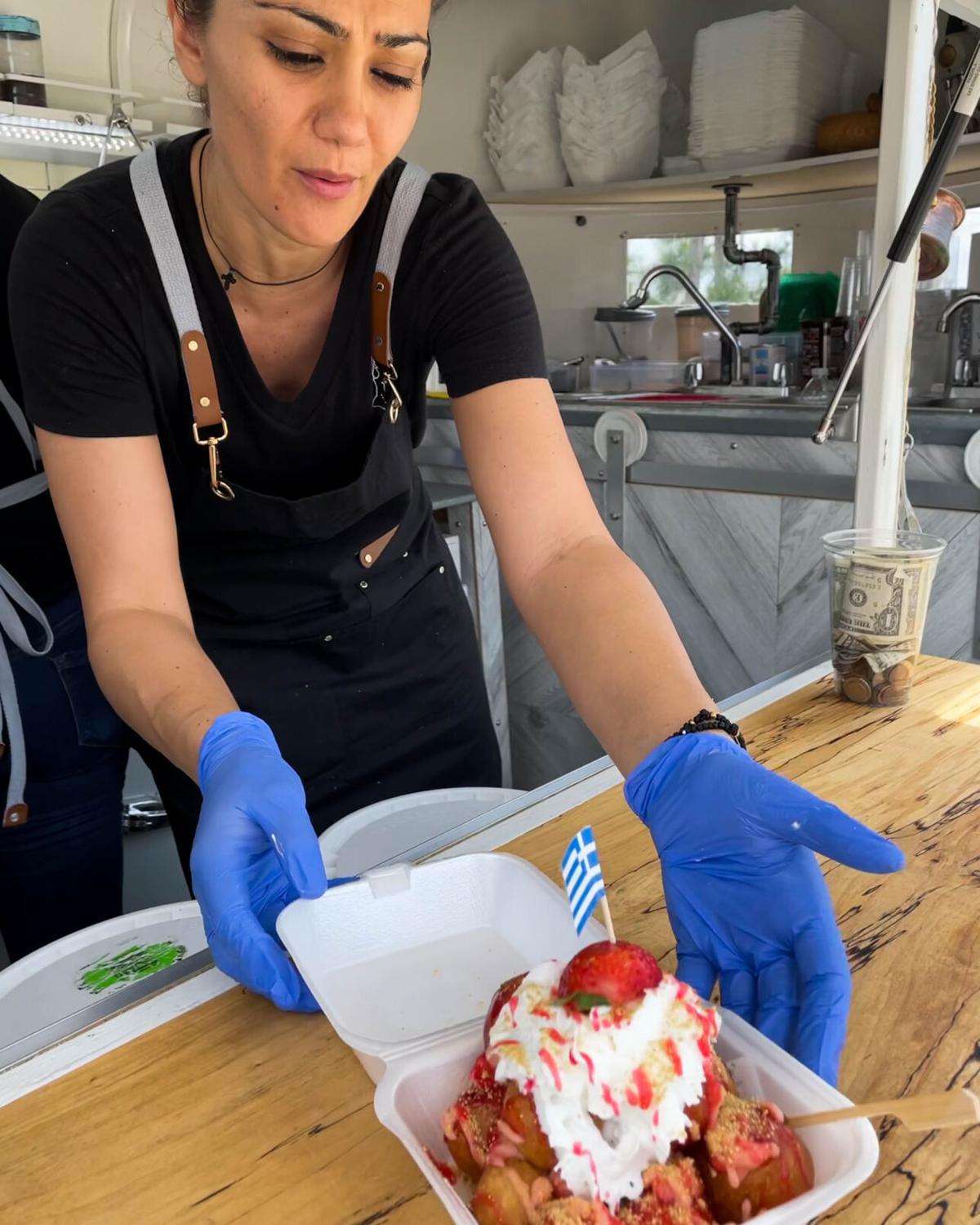 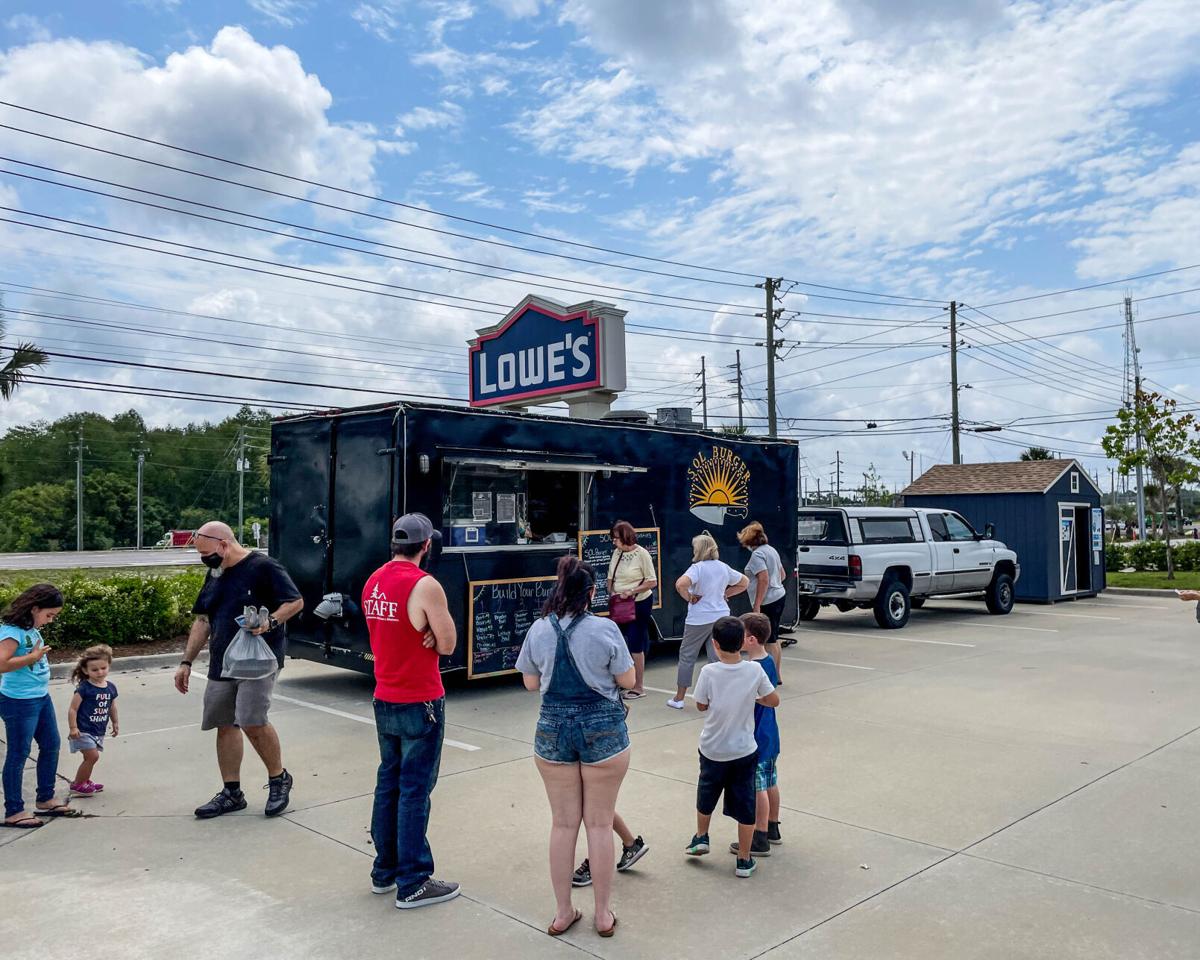 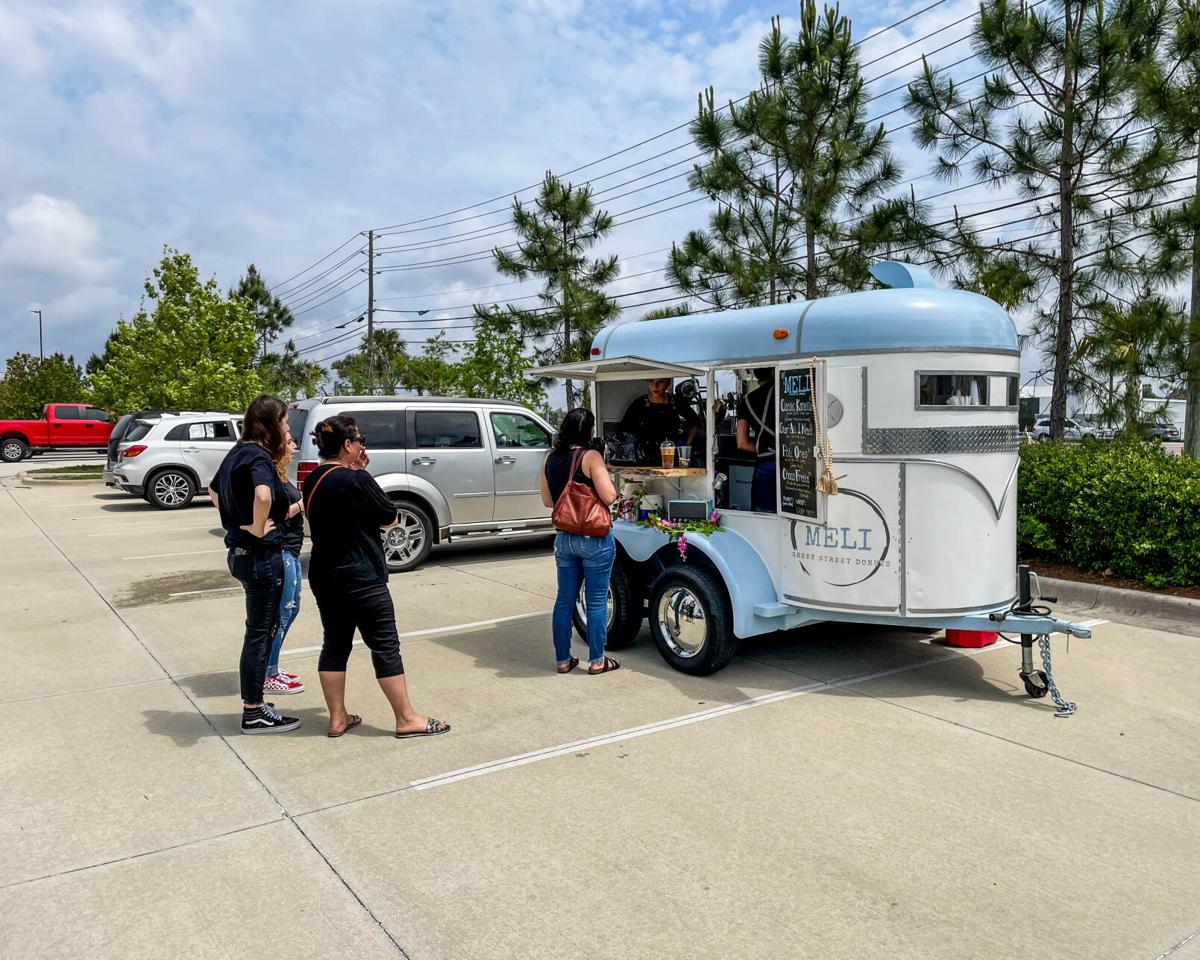 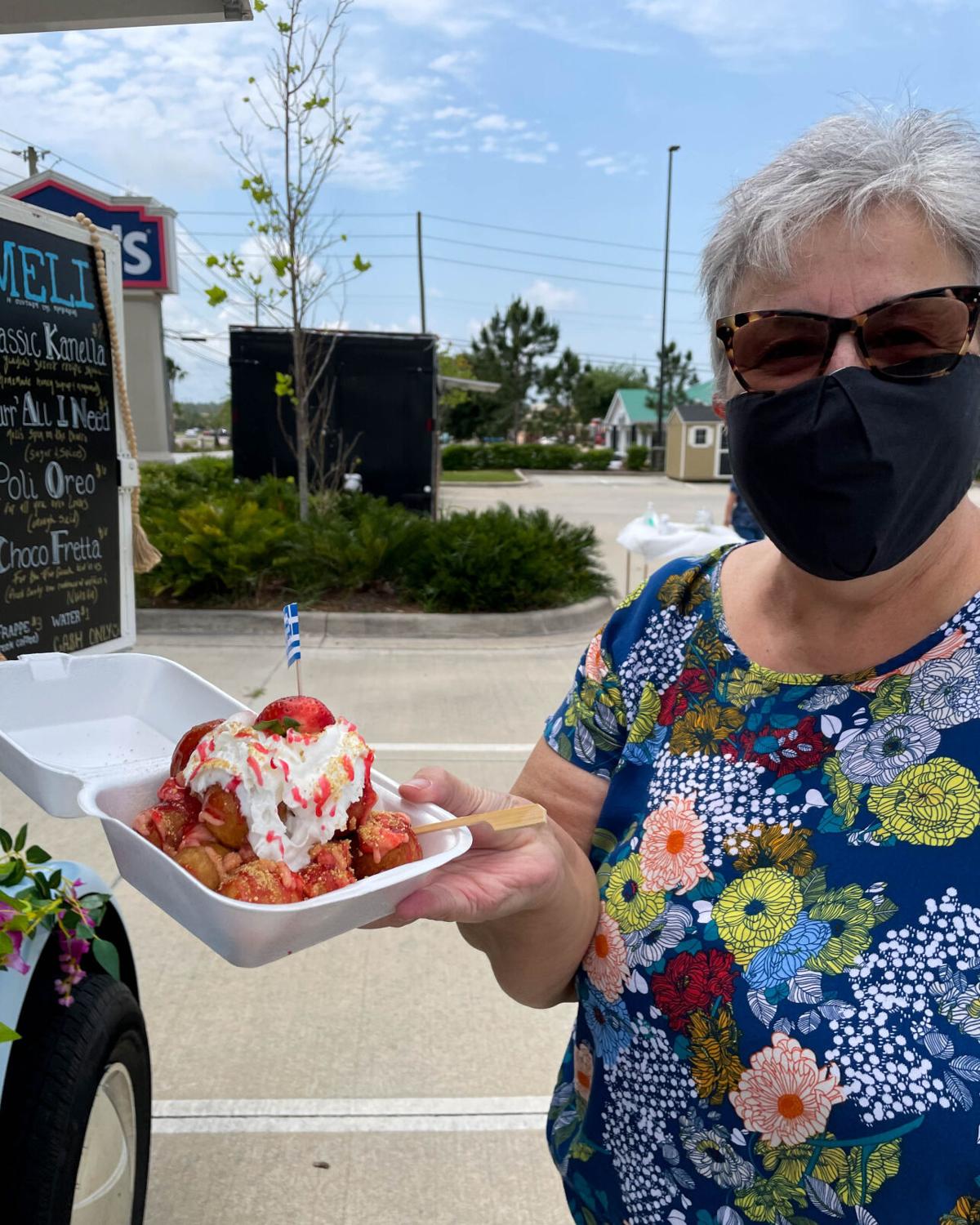 Daughters of Penelope member Eva Christy poses with her pile of Meli Greek Street Donuts during the benefit for the family of fallen Pinellas County Sheriff’s Deputy James Magli. 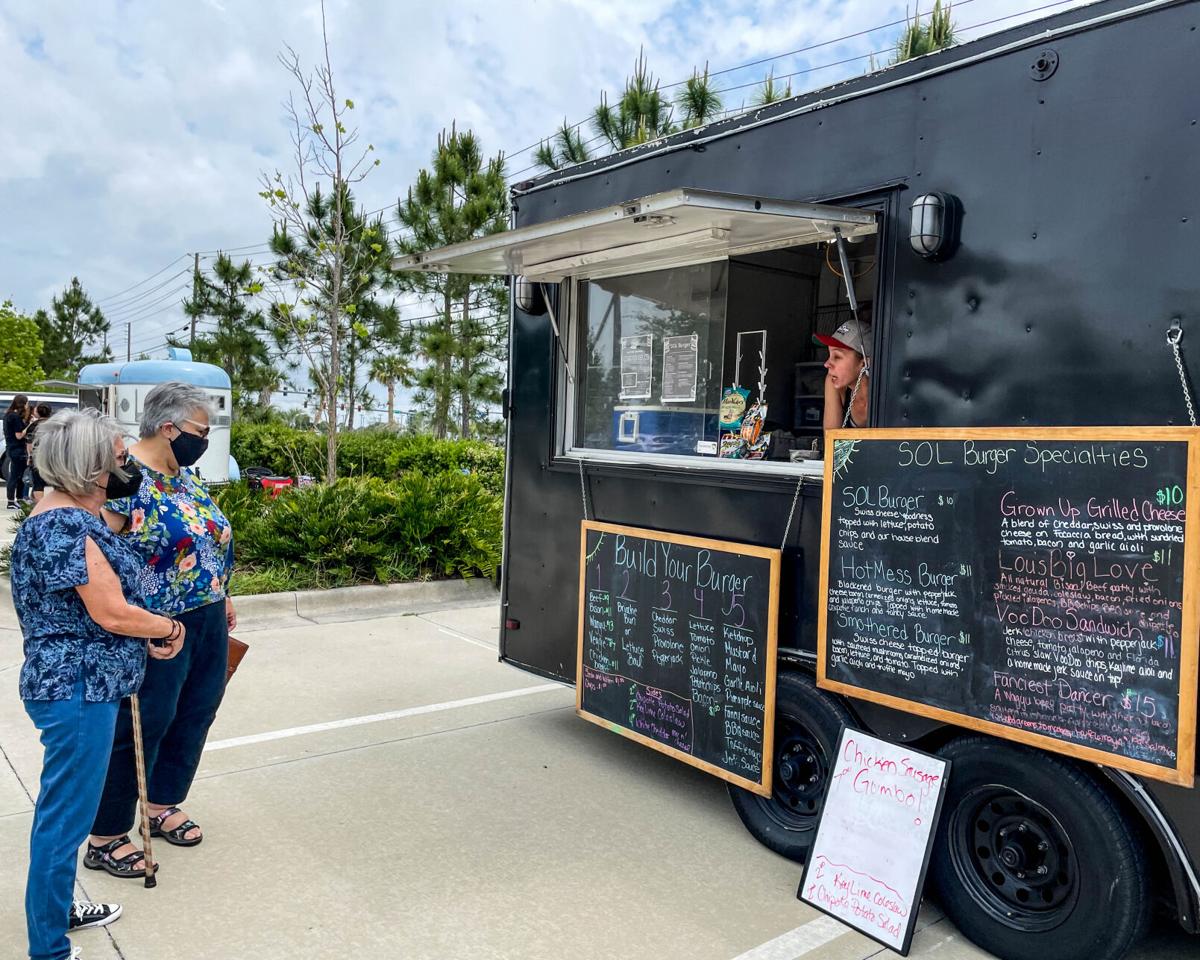 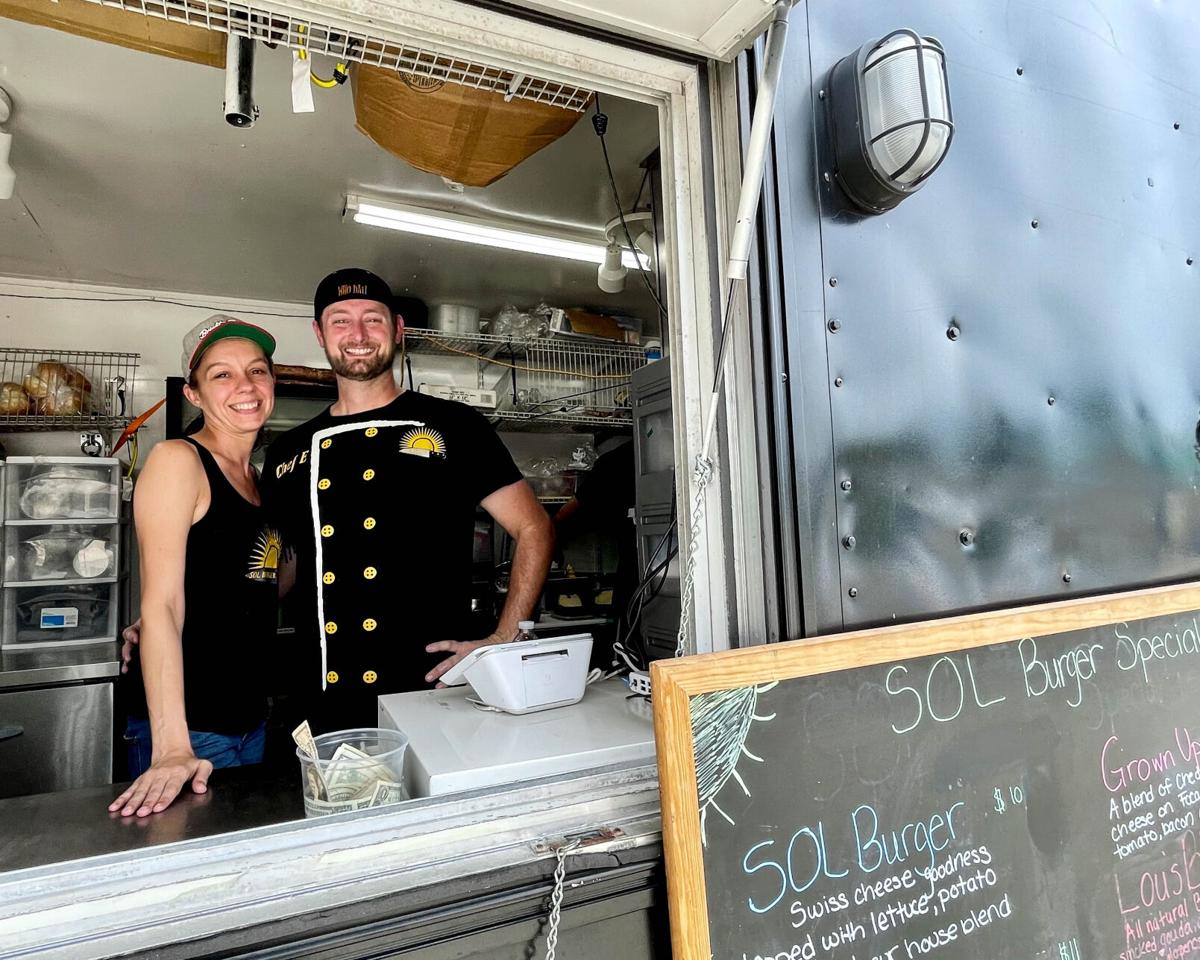 Daughters of Penelope member Eva Christy poses with her pile of Meli Greek Street Donuts during the benefit for the family of fallen Pinellas County Sheriff’s Deputy James Magli.

TARPON SPRINGS — A food truck rally hosted by the philanthropic group Daughters of Penelope raised more than $1,600 for the family of the late Pinellas County Sheriff’s Deputy James Magli.

The owners of SOL Burger and Meli Greek Street Donuts set up shop in the Lowe’s parking lot at 41800 U.S. Highway 19 N. on Apr. 17-18, and they saw a huge turnout for the benefit for the fallen officer, who was killed in the line of duty on nearby East Lake Road on Feb. 17.

According to Daughters of Penelope Tarpon chapter’s Penelope Koungras, she came up with the event as a way to support the Magli family while giving the local food trucks more exposure.

“I was trying to think of fundraising ideas for the Magli family and my main obstacle was finding a location,” Koungras said the afternoon of April 17 as a steady stream of guests filed into the lot. “Someone in the organization said to contact Lowe’s and they were absolutely willing to help. Then Meli D. and SOL Burger said they were definitely up for it, and here we are.”

Indeed, the owners of both businesses said they were more than happy to help with the worthy cause, and they also jumped at the chance to set up their trucks in their hometown, where a controversial ordinance prevents the operation of food trucks except for industrial areas and sections of U.S. 19.

“We love having an opportunity to give back to the community and we were looking for a way to stay in Tarpon and support the Magli family at the same time,” SOL Burger co-owner Ashley Durham said as her husband, Elijah, manned the grill. “So, this was a great idea.”

The Durhams, who have been leading the charge to get city officials to revisit the ordinance and allow food trucks to operate all around town, specifically for private gatherings, said they had already sold $600 worth of food in the first couple of hours Saturday, continuing a trend of successful gigs in Tarpon.

“Every time we do an event in Tarpon, we hit our goal of $500,” Elijah Durham said. “Usually, we have to make a two- or three-hour trip just to make a couple of hundred dollars. So, it’s nice to be able to drive right down the street and contribute to this worthy cause that’s already proven to be a big success for us and for the Magli family.”

A few yards away in front of Irene Manglis’ little trailer, a line formed as patrons waited to be handed a Styrofoam container full of her mouthwatering loukoumades, or Greek donuts.

Like the Durhams, Manglis said she jumped at the opportunity to support such a great cause.

“I feel very honored to be able to help,” she said between serving customers. “I reached out to the Magli family as soon as it happened, and then the Daughters of Penelope reached out to me and I was all for it.”

Manglis, who said she takes her converted horse trailer “wherever she can,” including St. Petersburg, New Port Richey, Clearwater and Tampa, said she was thrilled to be able to work in her hometown for a change.

“So far it’s been a very good event, for sure, and it’s great to be in Tarpon Springs,” she said.

According to Daughters of Penelope’s Eva Christy, the event was representative of the group’s overall mission to provide help to those in need in the community.

“It’s typical for the Daughters to reach out to the community and help someone in need,” Christy said as she prepared to dig into a pile of whipped cream-covered donuts. “It’s what we do.”

To contribute to the Magli family, checks can be mailed to the Daughters of Penelope at 20 W. Tarpon Avenue, Tarpon Springs, FL 34689.