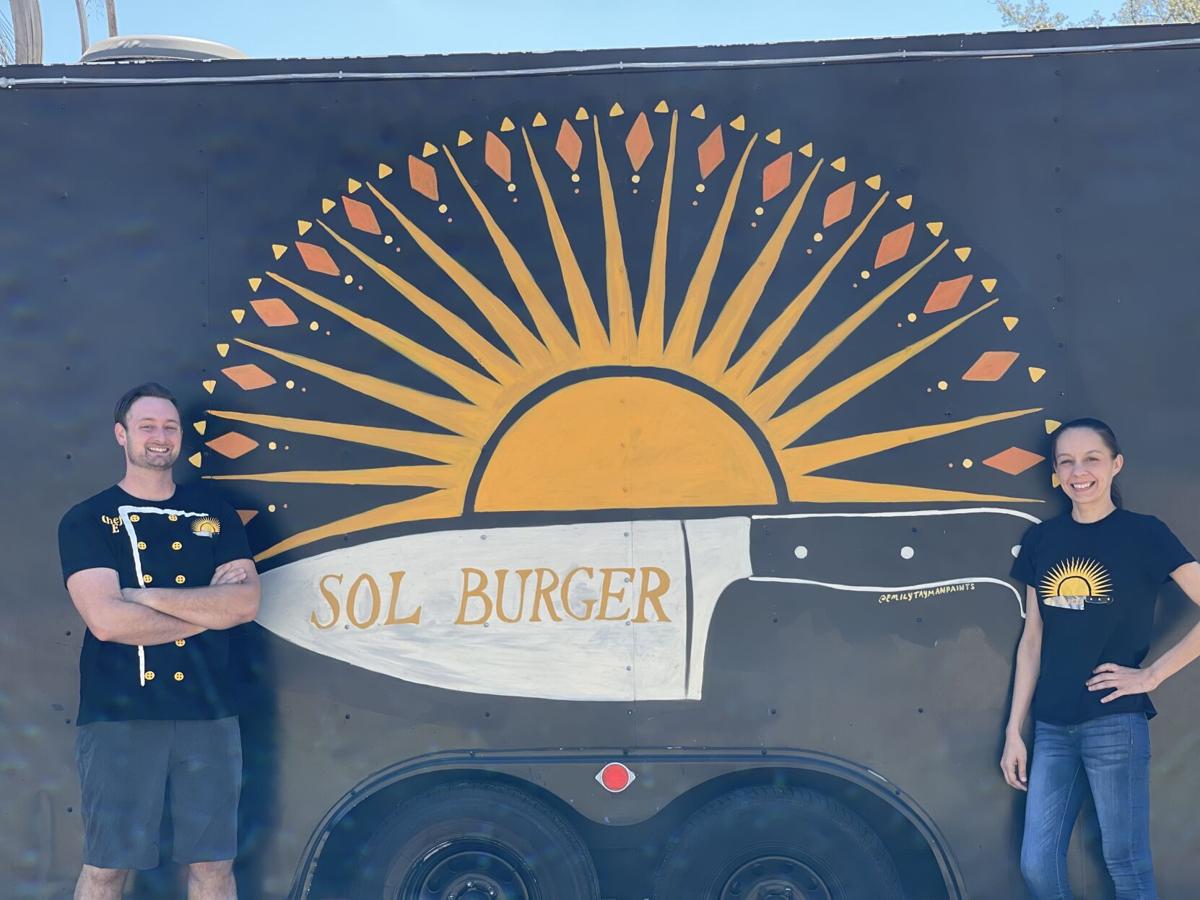 SOL Burger owners Elijah and Ashley Durham pose in front of their food truck. The couple is attempting to get Tarpon Springs officials to revisit an ordinance that prevents mobile food vending vehicles from operating in most sections of the city except on U.S. 19 and in certain industrial areas. They’ve started a Facebook group and a petition to enlist support for their cause. 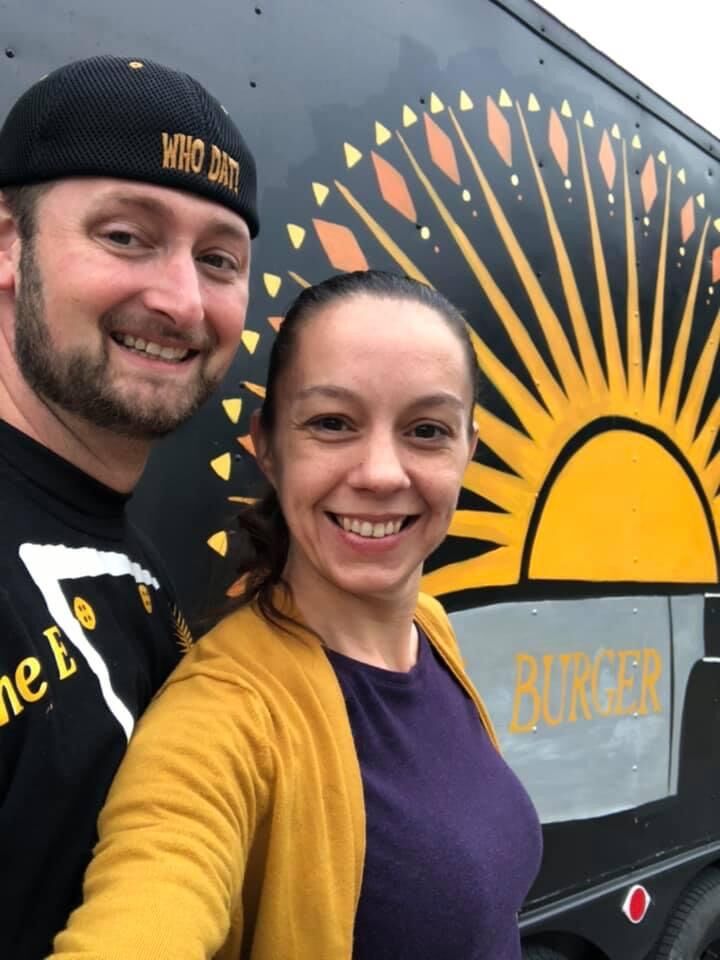 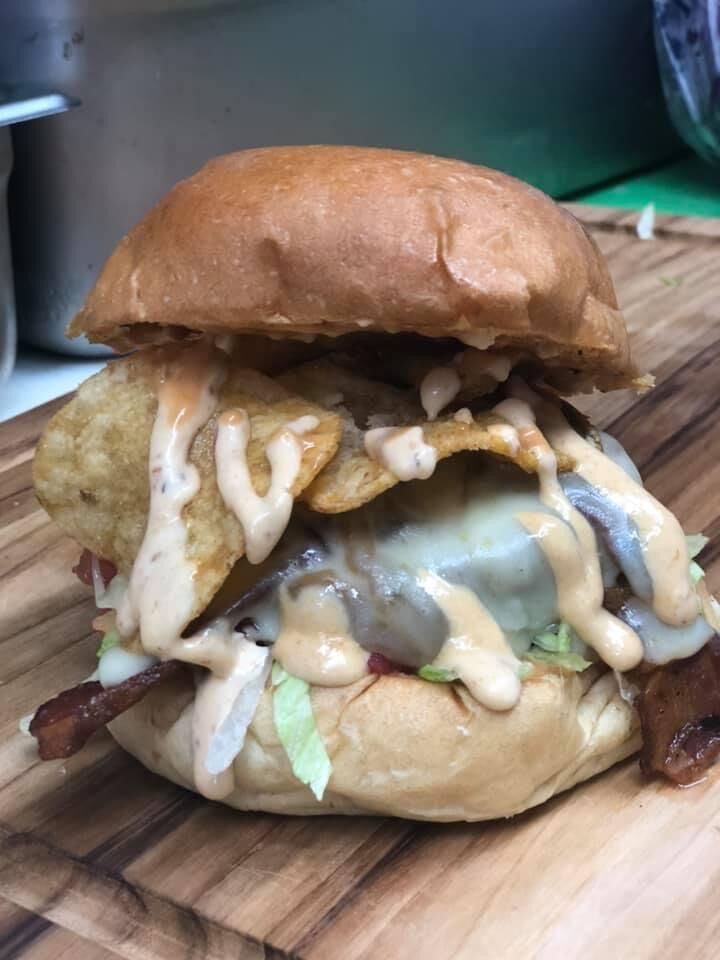 An example of the food served by the SOL Burger food truck.

SOL Burger owners Elijah and Ashley Durham pose in front of their food truck. The couple is attempting to get Tarpon Springs officials to revisit an ordinance that prevents mobile food vending vehicles from operating in most sections of the city except on U.S. 19 and in certain industrial areas. They’ve started a Facebook group and a petition to enlist support for their cause.

An example of the food served by the SOL Burger food truck.

TARPON SPRINGS — When city commissioners voted 3-2 in September in favor of an ordinance that regulates the operation of mobile food-vending vehicles in town, the decision brought an abrupt end to an arrangement Ashley and Elijah Durham had with Brighter Days Brewery to operate their SOL Burger food truck on the Safford Avenue property.

“We felt defeated. This was not our plan,” Elijah Durham said recently about the ruling, which allows food trucks to operate only on certain sections of U.S. 19 and industrial areas or as an accessory to an existing restaurant. “Our plan was to be at Brighter Days about 70-75% of the time. We spent $800 on a 50-amp hookup and we were going to pay Brighter Days a monthly rent and try it for 30 to 60 days to see how it worked. … We felt it would be a perfect fit.”

The Durhams’ plan came into focus after Elijah was laid off from his position as executive chef at Mease Manor in Dunedin last May. After spending 20 years in the restaurant industry doing everything from chef to owner to manager, Durham said they decided to go the food truck route.

“We took five months to plan this as our future,” he said.

But the commission’s ruling threw them a curve.

“We’re parents and we dropped every dime into this,” Ashley Durham said. “We live in Tarpon Springs and we want to work in Tarpon Springs … but the problem is we can’t do that because of the way the ordinance is written.”

Determined not to give up, the Durhams began operating SOL Burger outside the greater Tarpon Springs area, putting unanticipated wear and tear on the truck, they said, as well as catering private events hosted by local businesses and organizations that were becoming more popular over the past few months.

“HOAs love it because we provide a cool, socially distanced dining option for the whole neighborhood,” Elijah Durham said.

But the pivot backfired after they said the police were called on them while they were catering an event downtown last December and they were told they would be fined $118 for any subsequent violations.

“I wasn’t in this to fight Tarpon Springs until this happened and highlighted the government overreach and lack of business opportunities in this city,” Ashley Durham said.

The Durhams started a Facebook group and a petition to garner support for their movement, and the couple appeared before the City Commission on Feb. 9 to ask it to review the ordinance.

“Our intent with this is to preserve the culture of our town, the heritage of our town,” Elijah Durham said, noting he wasn’t looking to operate his truck on the Sponge Docks or downtown. “It is not to come in and displace any other business. We truly believe that food trucks in general can bring business to the area and help support local businesses as well.”

Durham added they would be “perfectly amenable to try to create some areas in the CRA (Community Redevelopment Agency) district and the residential districts where we are able to operate on private property with written permission,” while his wife lamented the fact they could service schools in Palm Harbor but not ones in their own town.

“I can’t serve the Shepherd Center and I can’t serve many, many other people that want us to because of this ordinance,” Ashley Durham said, adding, “this is about more than restaurants. … We need to come to the table and fix this.”

The Durhams had support from David Happe, who said he got upset when he learned couldn’t hire SOL Burger to cater a private function in Tarpon.

“You’ve decided, for some reason, to prohibit a business from providing a service to me, your resident, through another private business. But not all business. Just certain businesses,” Happe said while asking the commission to “overturn this nonsense and let the market decide.”

That sentiment was echoed by Elijah Durham the next day.

Since the meeting, the Durhams have met with several city officials to enlist help with their mission.

But as it stands right now, there appears to be little to no official support to review the ordinance.

“I explained to them before we started that food trucks were not allowed in Tarpon Springs. Period,” Mayor Chris Alahouzos said of his phone call with the couple. “I told them we had a vote to pass it, the ordinance is the law of the city and we have to abide by it.”

Alahouzos admitted he had “received phone calls from different restaurant owners who were concerned about having those food trucks in town because it could hurt their business, creating a restaurant and competing for business with a person who pays thousands of dollars in rent and payroll. So, you have to consider both sides.”

But according to Elijah Durham, the city is only considering one side, although he refuses to give up the fight.

“I don’t know how to get them past this old-school mentality,” he said, adding, “there’s not a lot I can do except hack away at this tree with my little axe and hope it falls down someday.”