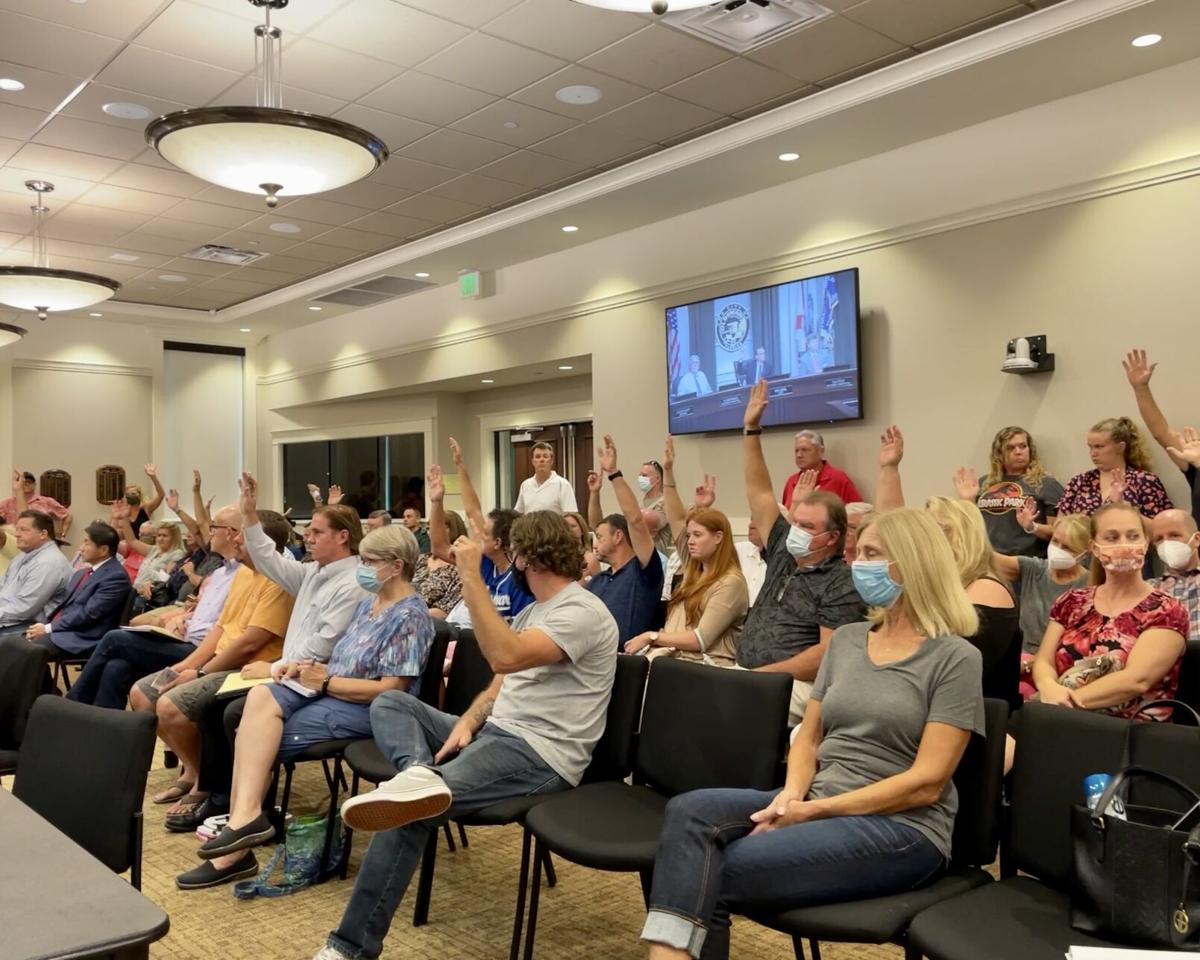 Dozens of residents attended the Aug. 3 Oldsmar City Council meeting to express their thoughts about the proposed downtown development, and the 90- minute discussion included concerns about a proposed increase in density as well as a perceived lack of community involvement in the discussions on the project. 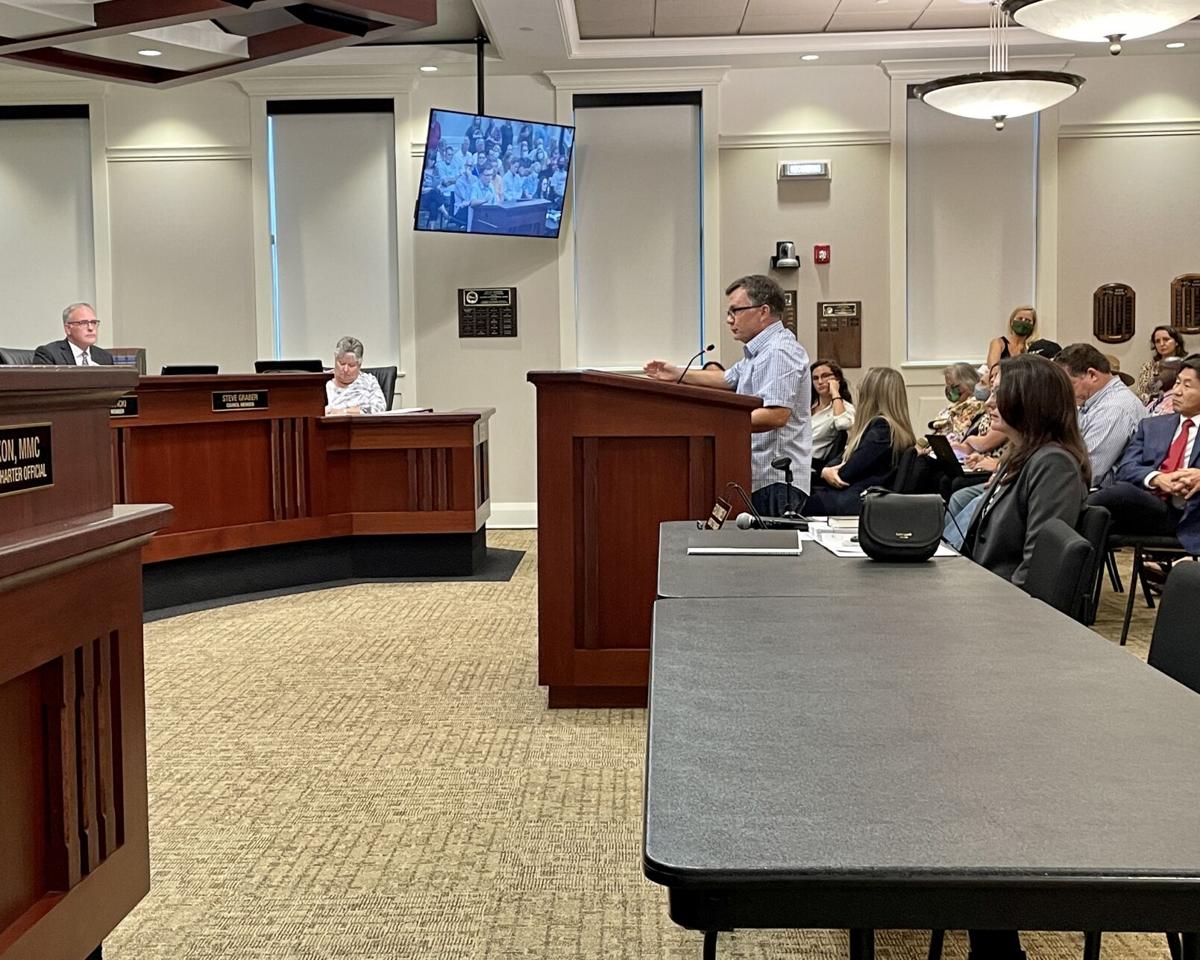 Dozens of residents attended the Aug. 3 Oldsmar City Council meeting to express their thoughts about the proposed downtown development, and the 90- minute discussion included concerns about a proposed increase in density as well as a perceived lack of community involvement in the discussions on the project.

OLDSMAR — After decades of discussions and weeks of keyboard rattling on social media, the proposed development of downtown Oldsmar received its first real public backlash last week, as dozens of concerned citizens attended the Aug. 3 Oldsmar City Council meeting to voice their thoughts on the topic.

The firestorm was ignited by a pair of proposed code amendments that would allow an increase in density for some downtown developments as well as a perceived lack of community input for the Oldsmar Town Center project, the planned mixed-use development that would incorporate residential, retail and parking, plus a hotel and greenspace, on 10 acres of vacant, city-owned land next to City Hall.

After opening the adjoining conference room to accommodate the SRO crowd, Mayor Eric Seidel said he wanted to “clarify some of the misinformation” on social media, and he had City Attorney Tom Trask explain the vote would allow him to prepare the ordinances which would come back before council for two public hearings. “Everyone here will have an opportunity to again address the City Council on those issues,” Trask said, adding, “This is a formality to move this thing forward.”

With that Seidel received consent from the council to extend the public comments past the standard 30 minutes, and what followed was an hour and a half of clear spoken and thoughtful commentary about Oldsmar’s long history how residents figure into the shaping of the city’s future.

“Democracy is not a spectator sport,” local Realtor Ginger Tatarzewski said to kick the comments off, adding she “hoped more people get up and speak” about issues affecting the city.

She got her wish, as more than two dozen people would go on to speak, including business owners and chamber officials, former mayors Doug Bevis and Jim Ronecker, and former council member Linda Norris.

Local developer John Bews, whose involvement in the downtown development dates to the 1990s, tried to clarify some things, noting the current zoning allows “for some more intense buildings,” including “a six-story office building right on State Street,” and he said Woodfield Development made “quite a few changes” to their proposal, including creating a public space, moving the buildings to Tampa Road and eliminating the office component. “They are asking for some density for the residential,” Bews said. “But we are getting a parking garage and some other things.” He also noted of the nine proposals he has seen, “this was the closest by a longshot” to the vision he and city officials have long had for the area.

“Some developers just refused to agree to any of our current existing codes,” Bews said, adding, “This particular project has.”

Resident Dave McDonald, however, decried the proposal, as the former planner said while he is for the downtown development, he thinks “the way you’re going about it all wrong with this density. It counters everything I’ve ever learned as a planner…. It’s just not the right way to do it.”

Indeed, many residents spoke against the density change that would allow more than 300 apartments to be wrapped around the five-story parking garage, while others said they welcome more residents, and taxpayer dollars, coming into the city. “I’m in favor of anything that brings possible growth to Oldsmar,” Mike “the Weather Guy” Boylan said, a point that was echoed by local business owner, Dori Daniel.

“I can attest, as a business owner and a resident, we are in uncharted retail territory right now because of this pandemic,” Daniel, who owns the Your CBD Store on Tampa Road, said. “And right now, we need that density, we need more foot traffic to keep the fun little retail booths and boutiques open.”

The discussion eventually wound back to the council, where each member praised the community’s engagement and the audience’s decorum. “Everyone who came tonight listened,” Steve Graber said.

The council ultimately voted 4-1 in favor of both agenda items, with Dan Saracki casting the no votes.

After the meeting, Seidel spoke about the controversy that seemingly sprung up overnight.

“Recently there has been a lot of misinformation posted leading up to last night’s meeting,” Seidel said via email, adding that’s why he felt “it was important to correct it when the meeting started.”

Asked about the sudden uproar, Seidel replied, “In the 2½ years I’ve been mayor, the topic of the Oldsmar Town Center has been on 26 public meeting agendas,” though he noted the city “is launching a website filled with information,” including frequently asked questions and updates, on the OTC project. “This way we can do a better job of making sure the information is current and accurate.” Seidel also noted the passage of both agenda items will allow council “to hold two public meetings on the density issue alone, and we will continue to seek more input as we get a final draft plan to share.”

For Tatarzewski, she said the moves are too little and too late.

“Everyone on the podium was adamant that they’ve done everything they can to let citizens know about the plan,” she said via text the following day. “I don’t agree.”

After stating she “doesn’t understand why there needs to be an agreement with the developer before there is a town hall meeting,” Tatarzewski noted the council “continually disparaged social media information, which really demonstrated the need now for a town hall meeting so everyone is working from the same set of facts.”