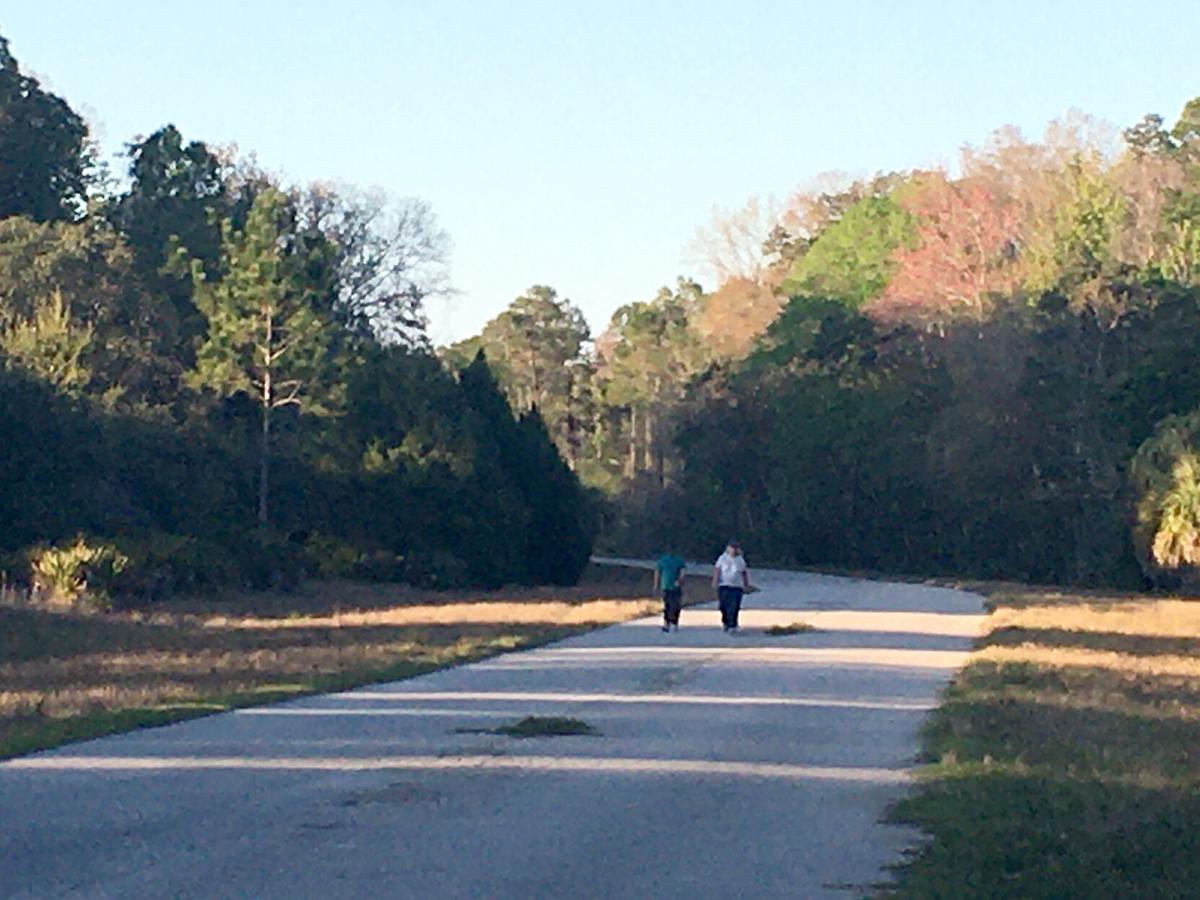 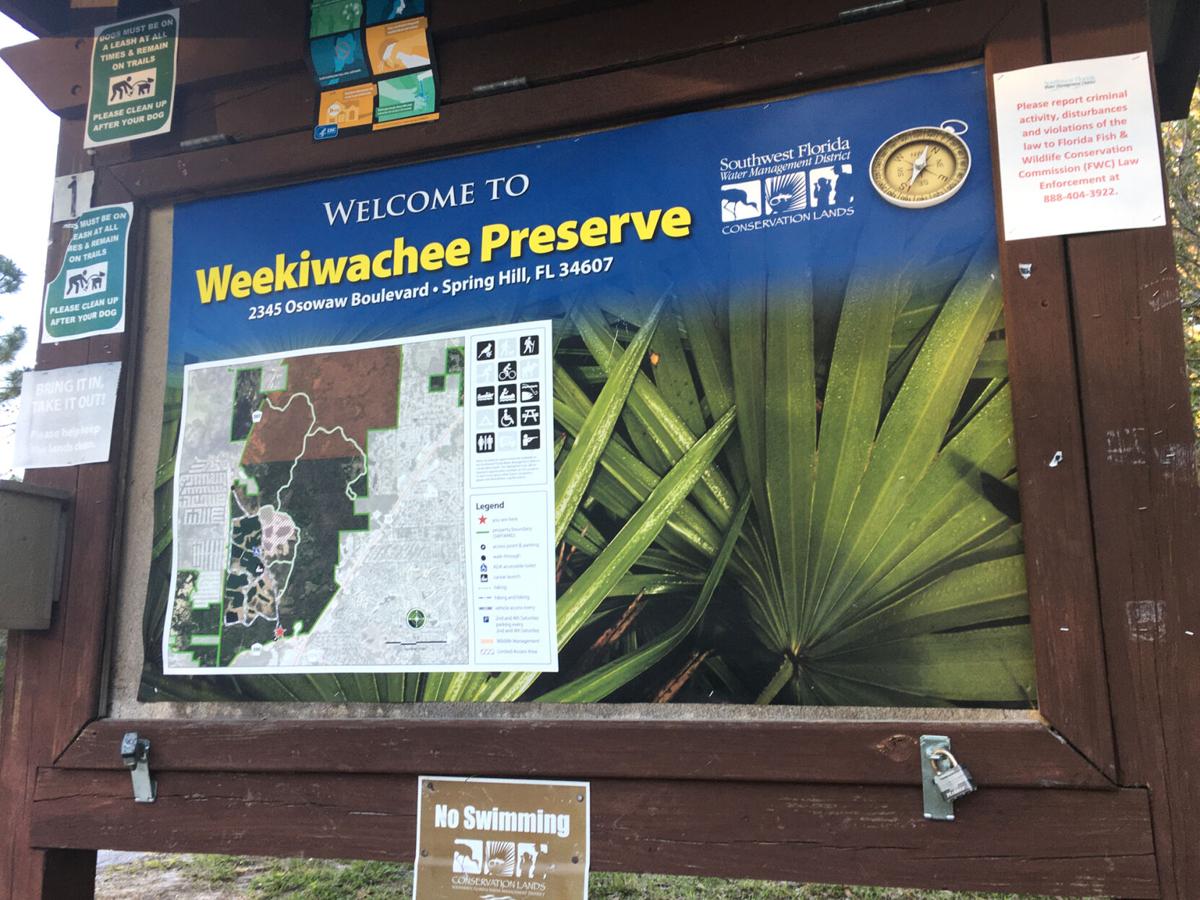 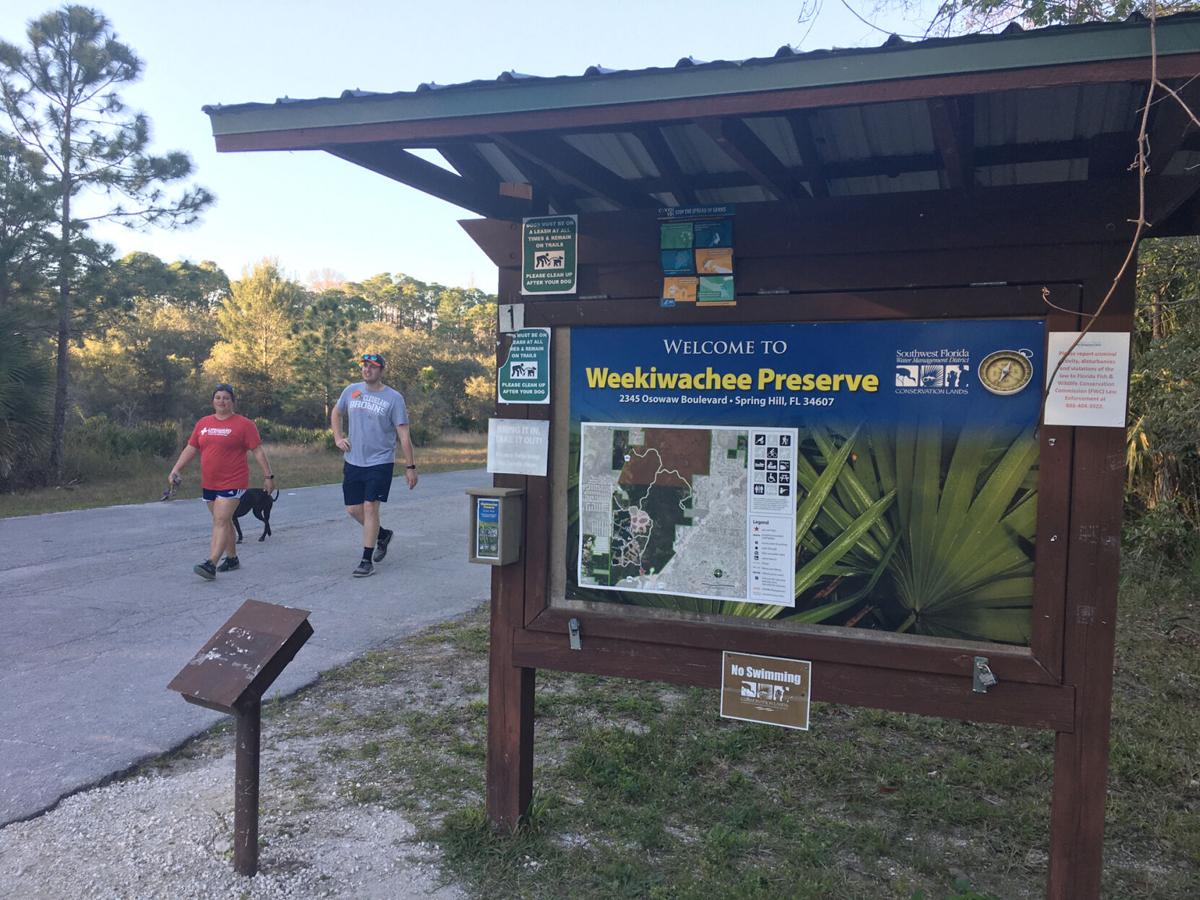 BROOKSVILLE — The Coastal Hernando Business Group presented to county commissioners Feb. 23 a solution to a long-standing problem revolving around the Weeki Wachee Preserve.

The group proposes the creation of the Aquatic Preserve Eco Tour Board Walk, a 6-mile-long pathway with three access points. The pathway would be used by pedestrians and bicyclists, and it would create an opportunity for residents and tourists to enjoy the natural beauty of Hernando’s coast. It would connect the 15 mines in the southern part of the Weeki Wachee Preserve to Rogers Park in the northern part of the preserve. The preserve would feature boardwalks, new trails, existing trails, and existing roadways.

The southernmost entrance would use an existing entrance on Osowaw Boulevard, leading to an existing parking lot and restroom facility near the lakes. The second entrance and parking lot to be created would be located at the water towers in Hernando Beach on Shoal Line Boulevard.

According to Yann Milcendeau, who represented the Coastal Hernando Business Group at the board meeting, construction of a short boardwalk would be necessary to connect an existing trail to the northern part of the lakes. The water tower entrance would also lead to the third entrance and parking lot at Linda Pederson Park. The last part of the boardwalk would connect Linda Pederson Park to Rogers Park.

“The 15 mine pits now filled with crystal clear water would create a beautiful park,” Milcendeau said. “While retaining the natural integrity of the area, this boardwalk would make one of the most beautiful sections of our county accessible to pedestrians, bike traffic, young and old.”

Signage along the boardwalk would educate visitors to the wildlife that can be found in the area. An additional benefit would be that the preserve could alleviate congestion at popular coastal areas.

This is not the first time a boardwalk has been proposed. In 2009, the Coastal Hernando Initiative Project had a similar idea and was able to establish fire hydrants, streetlights and restrooms along a boardwalk on the Weeki Wachee Preserve. After those items were completed, the project “faded away,” according to Diana Greenwell, president of the Hernando Beach Property Owners’ Association and member of the CHBG. In 2016, a new group came together to create a vision that included building a boardwalk from the Weeki Wachee Preserve to Linda Pederson Park.

“There are nearly 250 students in Hernando Beach,” Greenwell said. “Linda Pederson Park has become a popular greenspace for children and adults to use. Many residents believe an eco-boardwalk would serve the public as a safe, outdoor recreational opportunity for walking and biking.”

Commissioner Wayne Dukes said he remembers being a member of the CHIP program and the boardwalk being turned down by the Department of Environmental Protection with four words, “It’s never gonna happen.” However, Commissioners Steve Champion and John Allocco both have faith that if county commissioners believe in this project, something will get done with it.

Dukes said he recommends the boardwalk project go through DEP and the Southwest Florida Water Management District, known as “Swiftmud,” for approval before the commissioners can approve of anything.

“We can’t give permission because of the location of (where) the walk would be,” Dukes said. “If (DEP and Swiftmud) were to come back and say it’s all great, then that gives us a lot of latitude to go from there. Coming here first, we could say we love it and they’re going to tell us absolutely not going to happen.”

Dukes said he approached Department of Public Works about developing a walkway from Linda Pederson Park to Weeki Wachee Preserve to alleviate the stream of people from walking in the street during the summer to Rogers Park. The department was told it wasn’t possible, Dukes said. Additionally, moving funds from the Restore Act isn’t likely to happen as “it’s extremely restrictive what it is used for,” Dukes said.

Despite what Duke said he feels is unlikely to be approved, he is not opposed to the project.

“I think if we want this, they’re going to listen,” Champion said. “Let’s try to get this board together, maybe come up with some ideas, using the ideas from Hernando Beach, and I don’t see how that would hurt anything having a boardwalk. That’s not the extent of what I’d like to see at the old Weeki Wachee mines. I think there needs to be some more activity besides just walking.”

Allocco added that with the number of people who enjoy walking along the beach during the summer, he can see how popular using the boardwalk could be among visitors. He also said he thinks if the board is behind the project, something could happen.

Commissioner Elizabeth Narverud agreed that the public has been asking for something like this to happen, and put her support behind it along with Commissioner Jeff Holcomb.

County Administrator Jeff Rogers said that he has met with Swiftmud a couple of times and there has been progress. An agenda item is being developed for one of the next county meetings in March to discuss the project further with the district. The agenda item will open the board to determine what the project will entail, community buy-in, and the current lease with Swiftmud.

“They have been extremely receptive to working with us on a lease for part of that property and our conceptual ideas we’ve had about a boardwalk between the water tower to Linda Pederson Park, and the idea of the Rogers Park boardwalk; that was even brought up … by the board last year,” Rogers said. “I think (Swiftmud) is not against us. I’ll tell you what we have to do as a board is to be fair to the agencies to put their time into these things and their expertise.”