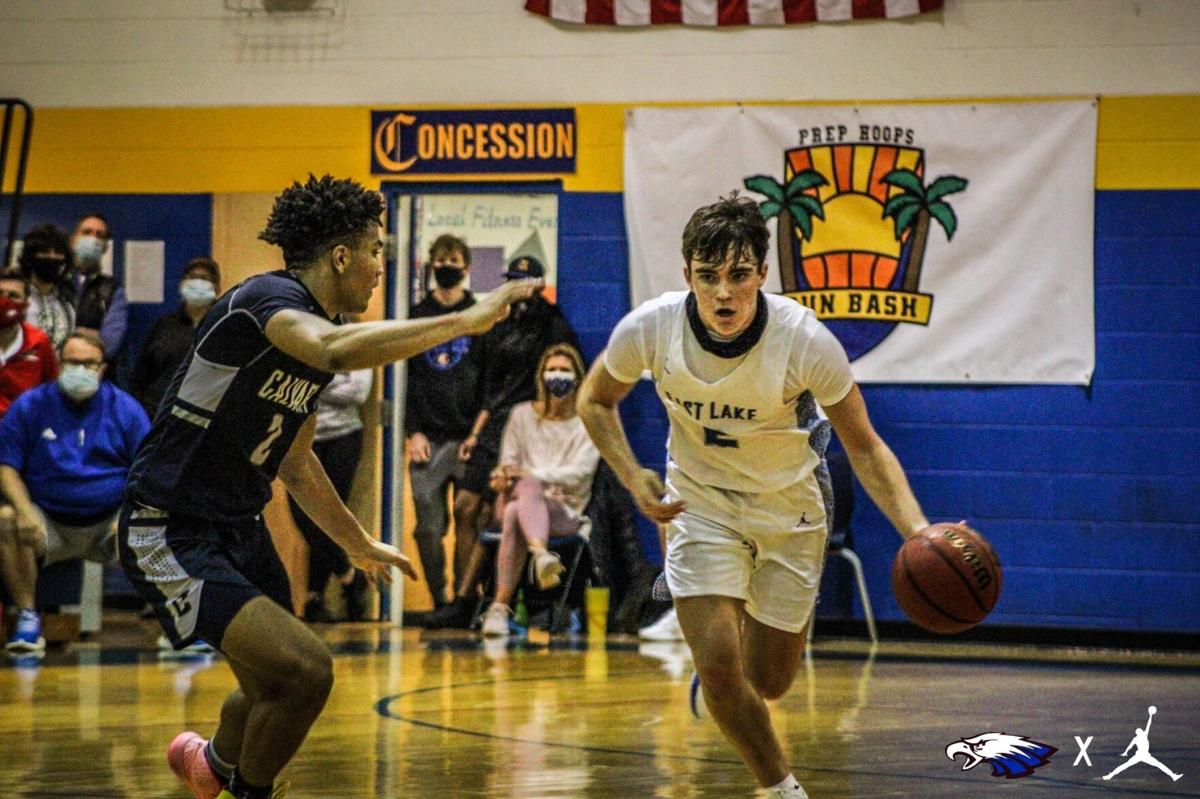 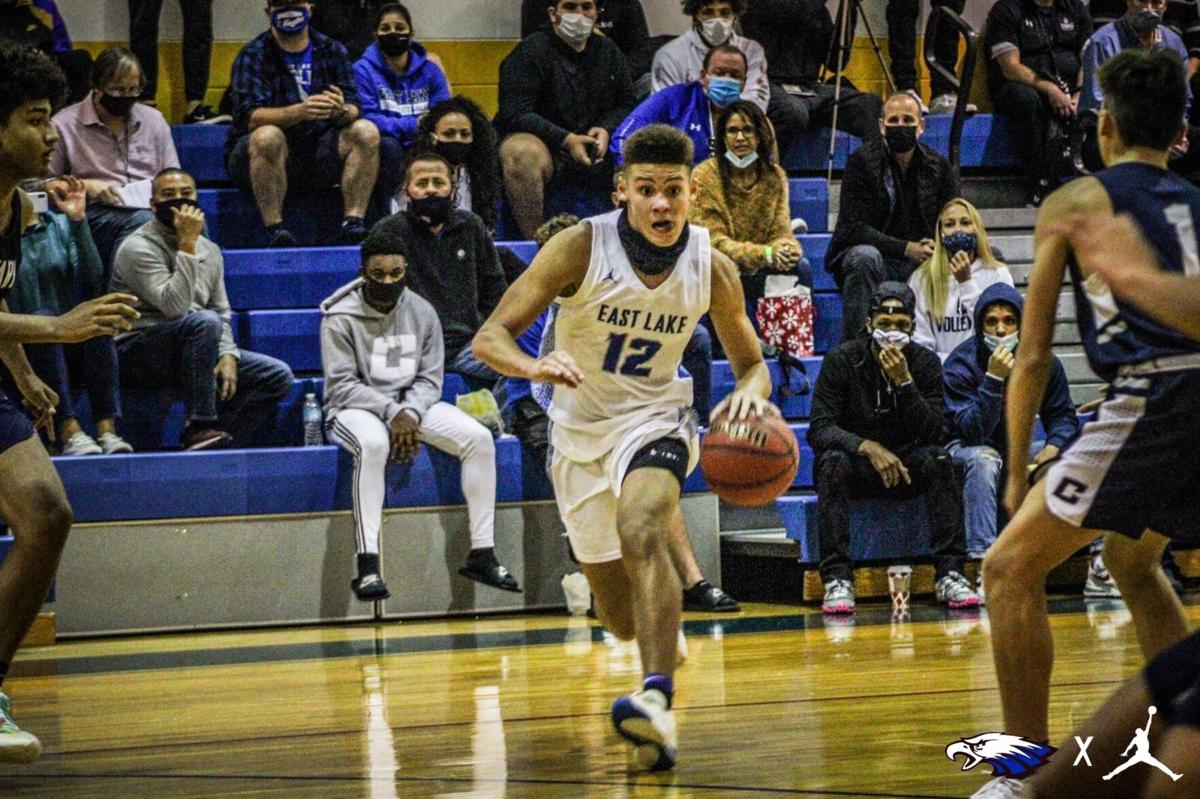 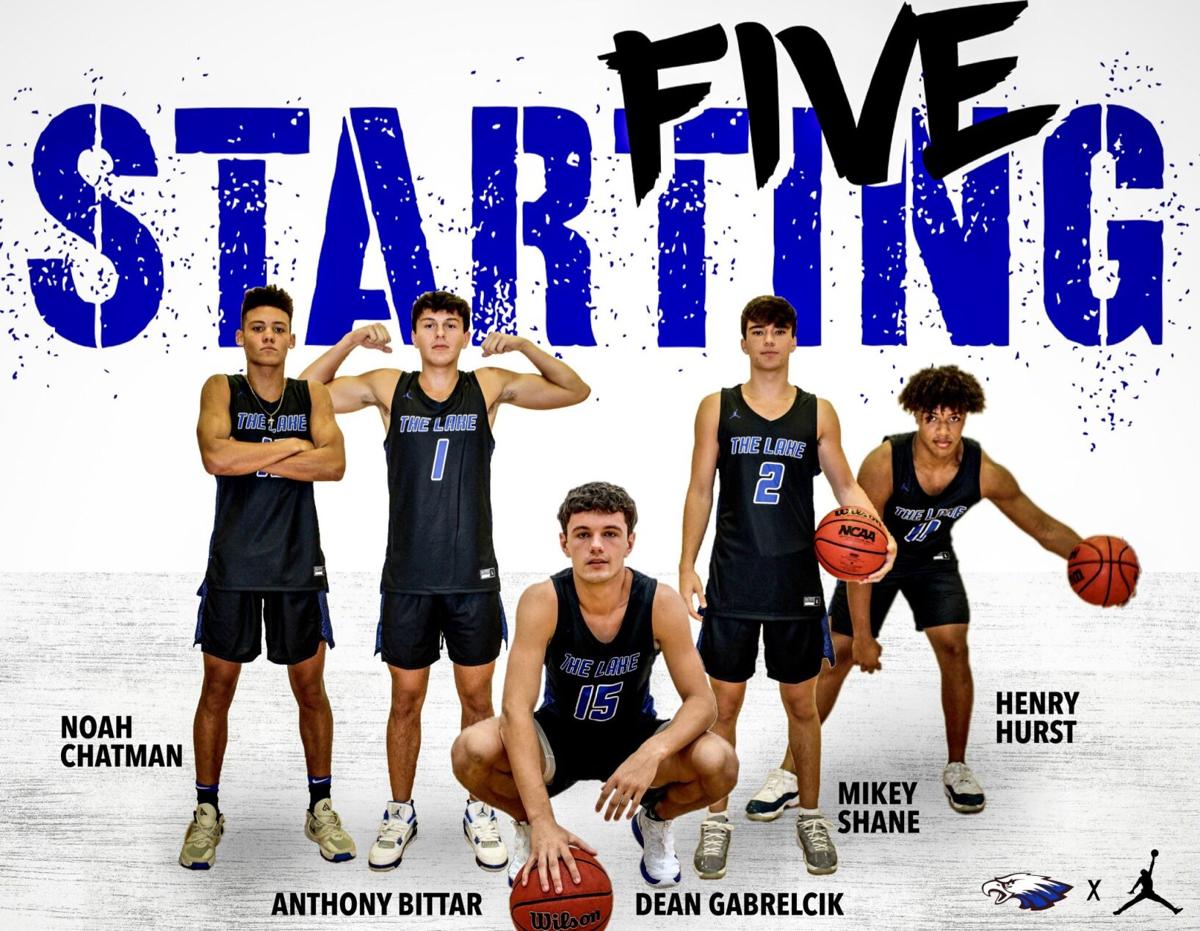 This year’s East Lake High starters are picking up where the 2019-2020 team left off, starting the season 8-0 and ranked as the No. 1 Class 6A program in the state.

This year’s East Lake High starters are picking up where the 2019-2020 team left off, starting the season 8-0 and ranked as the No. 1 Class 6A program in the state.

The Eagles have fully turned a corner from being that solid, potential playoff contender up in the North Pinellas suburbs to that team that can play with anyone — in the state.

Ranked as the No. 1 Class 6A team in Florida by MaxPreps.com, East Lake put this year’s talent on display last weekend in St. Petersburg. After gutting out a 75-71 victory in the opening game of the annual Sun Bash Tournament on Friday night against nearby foe Calvary Christian, the Eagles returned to the Canterbury campus gym and conquered adversity once again, this time against Class 5A’s No. 3-ranked team in the state, Jacksonville Lee.

The Eagles beat Lee by double digits, 68-52, but got the victory after dominating the Generals, 20-0, in the final quarter.

“That’s why we come to Sun Bash, to get tested and to play games like that,” East Lake Coach Britt Taylor said Friday night after the Calvary Christian win, though the quote would have fit just fine following Saturday’s contest, as well.

Taylor added that he felt the Eagles “grew up as a team” Friday, especially since they entered the two-game holiday tourney at 6-0 without much pushback from any opponent.

“We haven’t been tested all year,” Taylor said. “(Calvary) did a really good job of punching us in the mouth and really getting after it. We really didn’t play well and couple that with playing a good team and you have things like that happen.”

Being able to win in multiple fashions is one sign of a good team that can be dangerous come playoff time, and East Lake’s been cultivating that culture since Taylor took over for Joe Bloznalis in 2014-2015. Taylor’s teams combined for an impressive 65-38 record over his first four seasons at the helm, but had only one postseason appearance to show for it, in 2015-2016.

Things changed two years ago with the emergence of Dionte Bostick. East Lake’s first truly bona fide Division I stud led East Lake to its best record ever (24-5) and its first trip to a region final. Bostick and the Eagles improved on that performance last year, going 26-4 and earning a trip to Lakeland for the Class 6A state final four. East Lake lost to state power and eventual 6A state champ Bartow High, 68-57, but the historic run resulted in plenty of attention for the up-and-coming program.

Despite the loss of Bostick, now a freshman at Murray State, East Lake’s recent run of success helped earn it plenty of respect heading into 2020-2021. MaxPreps puts the Eagles to the top of the Class 6A rankings early and their statewide No. 14 ranking is likely to improve upon updates this week.

“We had such a great run last year and it just feels special for this program to be able to build on that without taking a step down,” Taylor said. “We work really hard, me and my assistants, and we grind. The kids do, as well. It’s really cool for them to get recognition and be ranked high. Now we just have to back it up every night.”

East Lake’s been validating the early season accolades with more of a team-ball mentality. Dean Gabrelcik (19.5 points per game), Anthony Bittar (16.4), Mikey Shane (15.5) and Noah Chatman (10.9) are all averaging in double figures and capable of leading the team in scoring or playing a supporting role.

“That’s the one difference between this team and last year’s team,” Taylor said. “Dionte was so dynamic last year that everybody was kind of like, ‘OK, Dionte, you do it.’ This year Dionte’s not there to save everybody, so other guys have to step up. As a coach you’ve got to get more involved when you don’t have Dionte on your team, so you’ve got to get everybody involved and do more things. God, we miss him, but it’s helped develop some other guys too.”

Gabrelcik, a sharpshooting senior guard-forward, showed East Lake’s team-first commitment Friday night when Calvary focused on limiting his looks at the basket. Rather than forcing up shots, Gabrelcik counter-focused by getting his teammates involved and leading both squads in rebounds, with 12.

“He’s that type of kid,” Taylor said of Gabrelcik. “He just takes what the defense gives him, and (Calvary) did a really good job double teaming him and Anthony (Bittar) in the backcourt and forcing our other guys to make plays, and they did. That’s why I love Dean and Anthony. They’re just team guys. They just want to make the right play for the team.”

Bittar and Shane, both seniors, came to East Lake this school year after leading rival Countryside in scoring last season. Their choices to transfer helped mitigate the loss of Bostick and are a big reason why East Lake is expected to make another run to Lakeland come March.

“One guy can’t do it,” Taylor said of contending for region and state titles. “It takes three, four, five guys to do it, and they’re all enjoying that role and they’ve done a pretty good job with it.”

A recent decision by Pinellas County Schools to place COVID-19-related travel restrictions on its public athletic programs caused East Lake to pull out of two high-end holiday tournaments, but Taylor and the program scrambled to get into a couple of other events later in January. The Eagles’ next game will be on the road Jan. 5 against another highly ranked North County foe, Clearwater High. The 10-1 Tornadoes also participated in the Sun Bash Tournament, beating Calvary Christian 76-69 on Saturday evening.