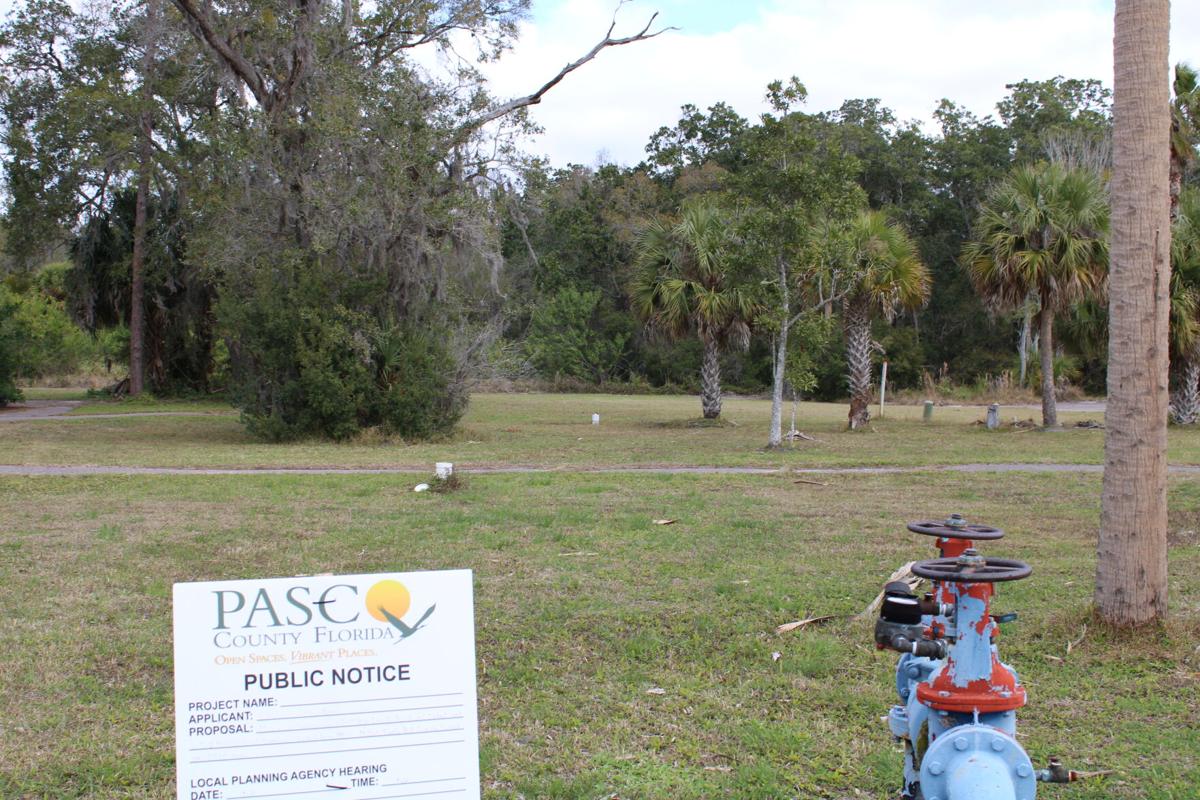 A sign advises residents of the meetings of the Planning Commission and County Commission on the land in the background. A sign advises residents of the meetings of the Planning Commission and County Commission on the land in the background.

Despite complaints from nearby residents about high-speed driving on Old Dixie Highway, excessive traffic and drainage concerns, the County Commission on Jan. 26 unanimously approved a zoning change to allow 230 townhomes on about 64 acres in Hudson.

“Old Dixie (is) already busy with park traffic in the summer and used as an unofficial race track by many, (and) will become even more dangerous with the additional vehicles from the ‘slam them together’ housing project,” wrote John Ennis of Hudson in an email to the county.

Michele Romeo, a board member of the Sea Pines Civic Association who has lived in the area since 2016, told the Suncoast News on Feb. 2 that while the new zoning is a done deal, it’s a bad one for the current residents of the area.

They will have to deal with increased traffic on substandard roads, she said, and the drainage plans aren’t likely to solve the flooding problems in the area.

“Nothing has changed,” she said. “And now you’re adding a development of 230 apartments.”

Clark Hobby of the Hobby and Hobby law firm representing Chelsea said the site was Phase Two of a development, and that the 230 townhomes was a substantial reduction in density from the original request.

In addition, he said, the homes will be behind landscaping and mostly not visible, and the development will help with the area’s flooding issues.

They agreed to the deed restrictions that were read into the record.

No members of the public showed up at the meeting to speak on the issue.

Lynn Olson of Sea Pines wrote in an email, “This project, if approved, would also be detrimental to all the wildlife within these 60-plus acres including an abundance of protected gopher tortoises. We do NOT want it approved.”

According to the “findings of fact” in the agenda documents, “A 100% gopher tortoise survey will be required at time of site plan submittal. No other evidence of listed species was found on the site.”

On Feb. 2, Olson wrote, “I am extremely disappointed to learn that Jack Mariano, as well as the other commissioners all approved this proposed project, especially after Jack attended our December Sea Pines Association meeting at which all the 40-plus attendees made it very clear why we opposed this development.”

At the Park at Chelsea apartment complex, property manager and resident Alex Pontes said she knew that the rezoning had been approved, but that was about all. She had no information on when construction work might begin or what the new development would look like.

She said she had heard that it would improve drainage in the area, which she said had been a problem, and that there was talk of trails, too.

“From what I’ve heard it’s going to be great,” she said.

Commissioner Kathryn Starkey said she had talked with the applicant’s representatives about the trail going up Old Dixie Highway to Sun West Park.

Hobby said he was told the plan is to extend the multiuse path up the west side of Old Dixie Highway, not on the applicant’s side.

“As we work through the drainage issues and how wide the drainage ditch needs to be, we will also be mindful of opportunities for trails on our side and trail connectivity,” he said. “Right now, the immediate concern is dealing with the drainage ditch and trying to come up with a design. Some of the initial estimates were for a very, very wide ditch that I don’t think will be beneficial to the area or my client, but we’re going to work that out, hopefully, very quickly, with your staff.”

Starkey said to not have a trail there will be a problem for the county trail network. “I just need confirmation that we’re planning for that trail,” she said.

The resident commissioner, District 5’s Mariano, said he just found out that the trail is designed to go on the other side, but thought it should go on the side of the residents for their benefit.

It’s very unusual, he said, to put something in this late in the process. He preferred to talk about the drainage.

Changes and land acquisition will give the water a place to go, he said. They need to find the widths they need.

“This is going to be a major, major benefit for the entire Sea Pines area,” Mariano said. “It’s always tough to get the water out of the end of the storm water situation. This is taking all those people who have suffered for all those years, and they’ll get the water out to the Gulf, where it needs to go.”

After that, they’ll be able to find out how much trail they will get, Mariano said.

Hobby said the trail is planned for the west side of Old Dixie Highway.

For Romeo, all the assurances mean little, and she was dismissive of Mariano’s comments.

“The people who live in Sea Pines do not have any confidence in what he says,” she said. “He was not well-received at the last meeting.”