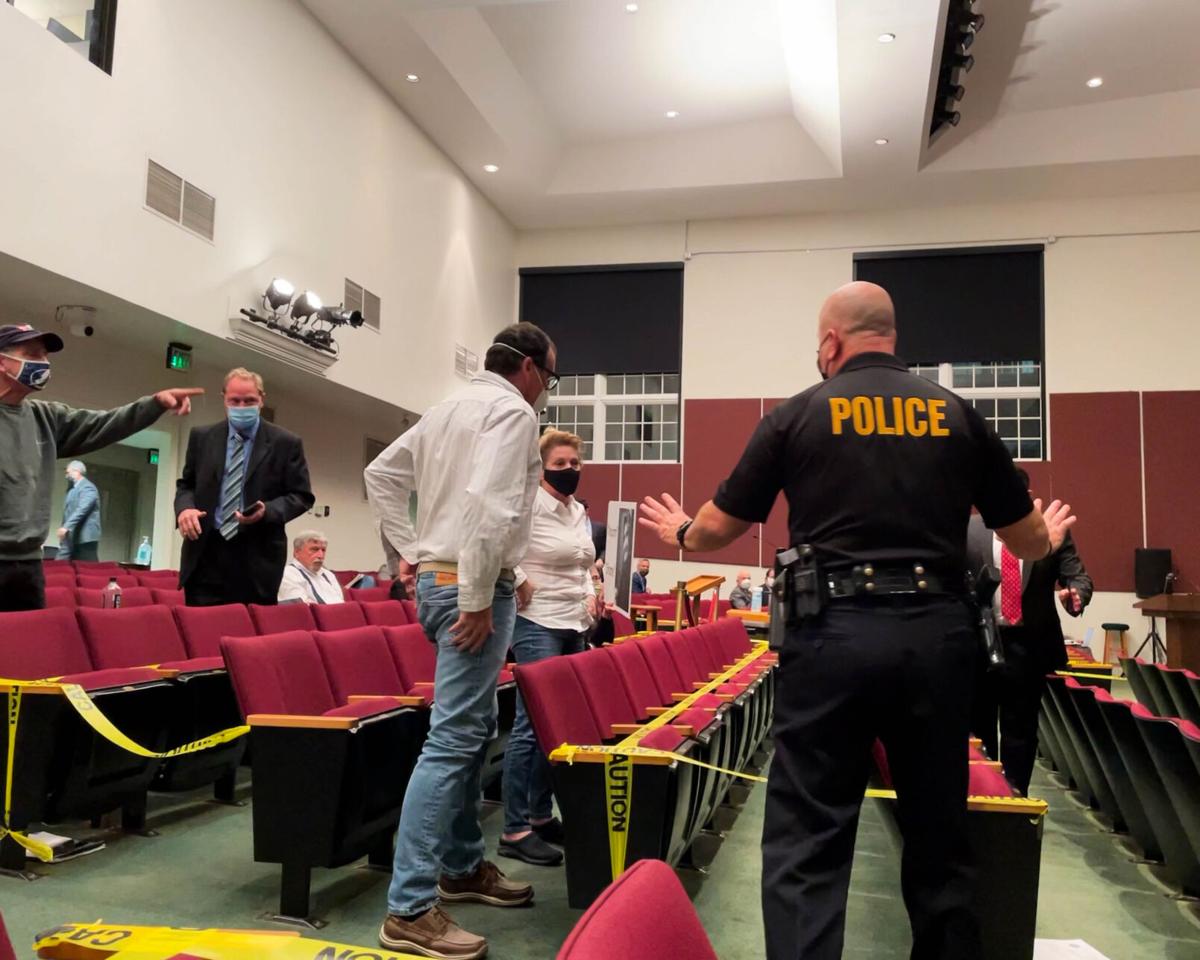 Tensions ran high during a Tarpon Springs City Commission special session on the potential development of what is referred to as the “Walmart property,” as residents were irate when they were told at 1 a.m. they would have to wait even longer for their comments to be heard. At 2:30 a.m. the second reading of the item, which began at 6 p.m., was continued to Friday, Jan. 15, at 3 p.m. 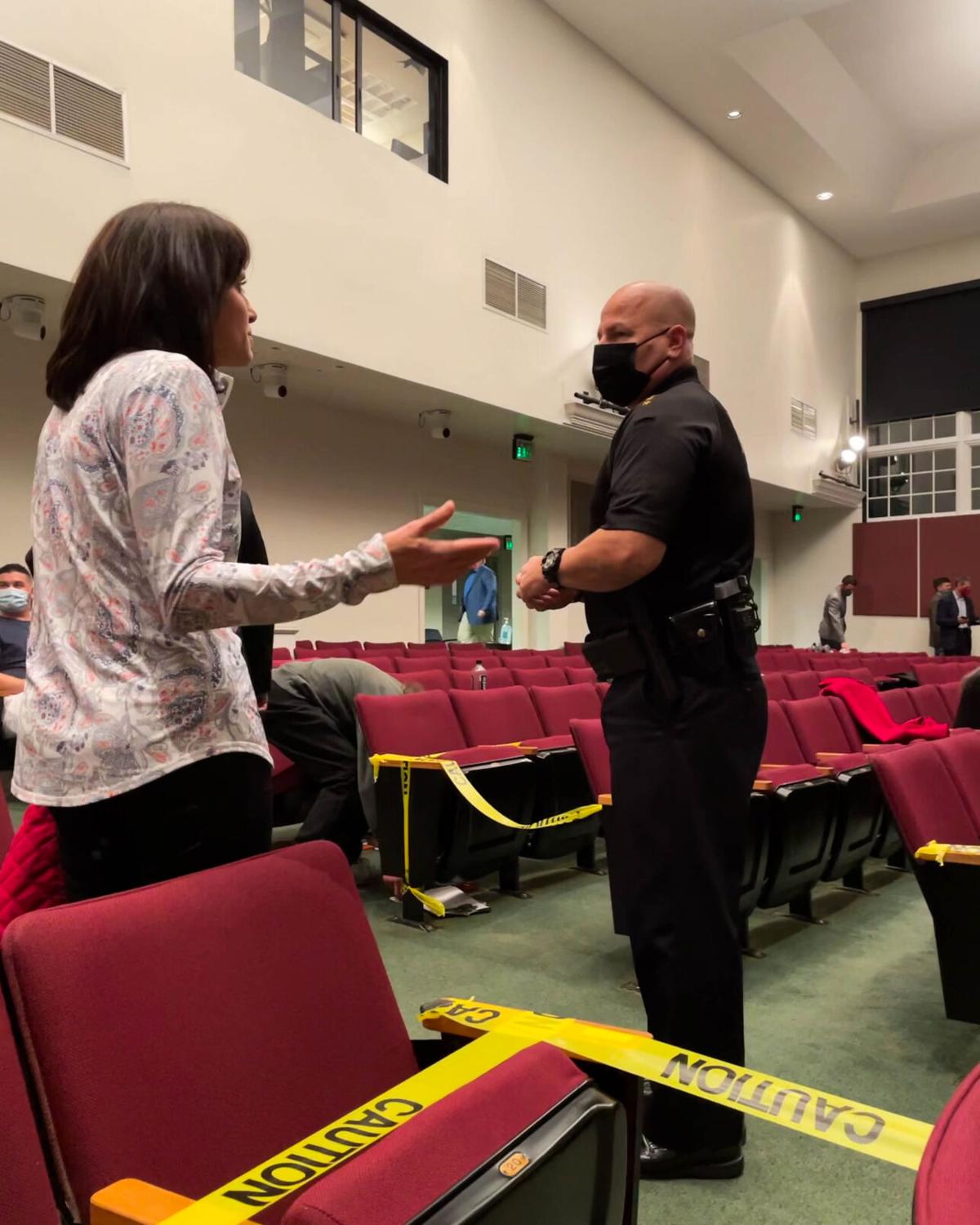 Lisa Offerman, a resident of the Sail Harbor subdivision, speaks to Tarpon Springs Police Chief Robert Kochen during a Board of Commissioners special session on Thursday, Jan. 7. Offerman and others in attendance were upset at having to sit at City Hall until after 1 a.m. for their thoughts to be heard on the potential development of a 72-acre parcel along the Anclote River. 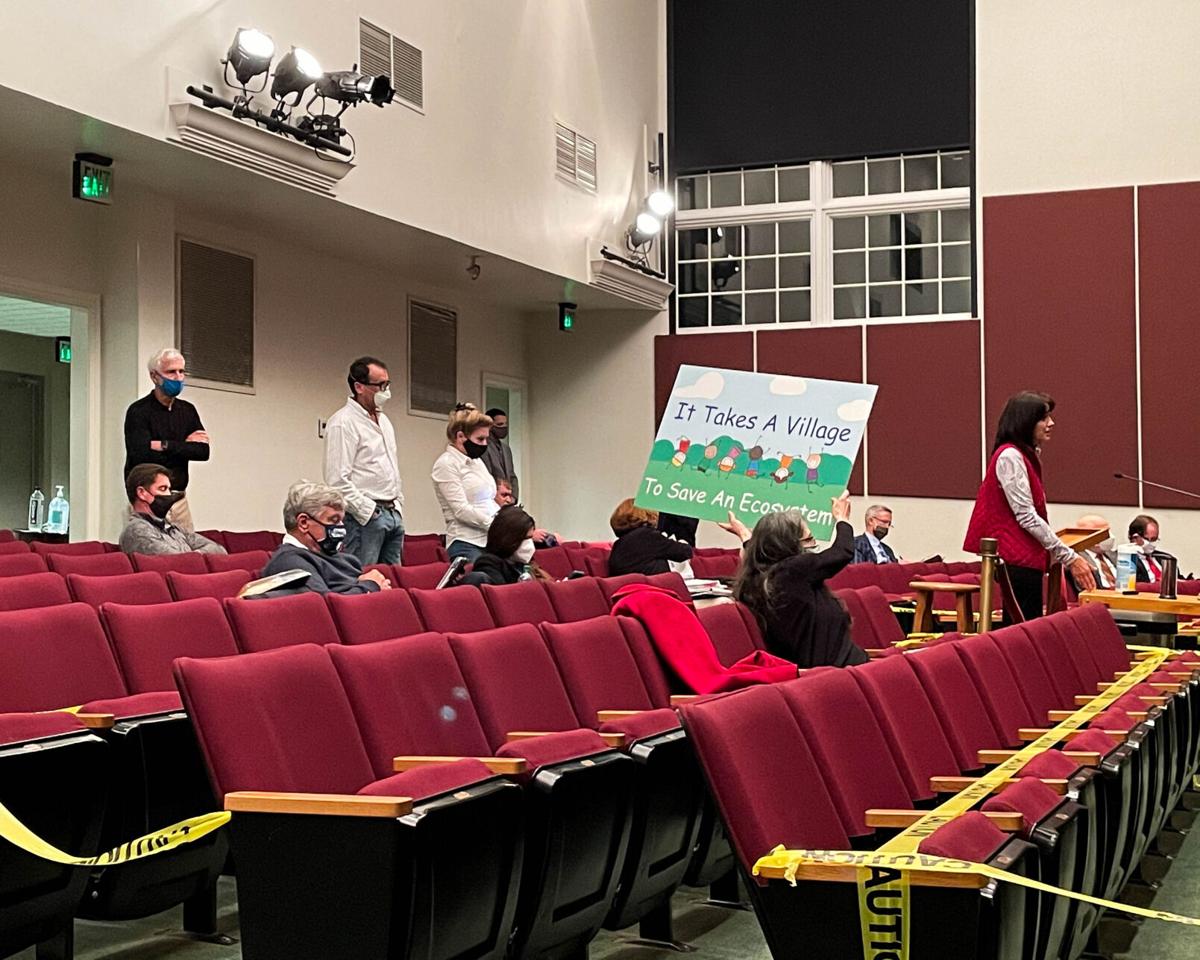 Tensions ran high during a Tarpon Springs City Commission special session on the potential development of what is referred to as the “Walmart property,” as residents were irate when they were told at 1 a.m. they would have to wait even longer for their comments to be heard. At 2:30 a.m. the second reading of the item, which began at 6 p.m., was continued to Friday, Jan. 15, at 3 p.m.

TARPON SPRINGS — City commissioners held a special session Jan. 7,  a continuation of the second reading of an ordinance that, if approved, would pave the way for a large residential development on a portion of vacant land adjacent to the Anclote River on U.S. 19.

But after spending more than eight hours discussing the planned preliminary development and rezoning request for the 404-unit Anclote Harbor apartment complex, no final decision was made as, once again, the meeting ran too long to cast a final vote.

Just before 2:30 a.m. Friday, Jan. 8, Vice-Mayor Jacob Karr announced they would have to continue the public hearing at another date because officials still had to read dozens of public emails related to the potential development of the 74-acre parcel known locally as the “Walmart property.”

“We still have over three hours of emails to be read, so I recommend starting earlier in the day,” Karr, who ran the meeting in place of Mayor Chris Alahouzos, told the weary group remaining at City Hall. After a short discussion, commissioners decided to continue the second reading, for the second time, on Friday, Jan. 15, at 3 p.m. The item was approved on first reading on Dec. 8 by a 4-0 vote.

The announcement capped a long night that featured dozens of experts’ testimony, public comments and out-of-state Zoom calls and left those in attendance baffled at the fact that, despite spending more than 14 hours discussing the issue over three meetings in the past month, it would take yet another marathon session to achieve resolution on the matter.

“I wish I had known we were going to be sitting here from 6 p.m. until 1 in the morning to give public comment,” said Lisa Offerman, a resident of the Sail Harbor subdivision that abuts the site, during a post-midnight break in the action. “I think they could do a better job. If they’re truly interested in getting public input and if their goal is to encourage citizens to participate, we shouldn’t be sitting here until 1 a.m. waiting to speak.”

The sentiment was shared by most of those remaining at City Hall. When Karr announced prior to the 1 a.m. recess that the emails would be read before they could speak, several attendees became visibly upset, forcing Tarpon Springs police officers to step in and quiet the crowd.

“This is absurd!” Toni Doyle said as several audience members stood and shouted at the commissioners.

Cooler heads eventually prevailed when Karr came back and announced they would allow those in attendance to share their thoughts before reading the emails. But by the time representatives for the applicant, Houston apartment developer the Morgan Group, and an attorney for the activist group Concerned Citizens of Tarpon Springs, finished making their presentations at 1:30 a.m., it was clear they would not be able to wrap the item up before sunup.

“How do you want to move forward?” City Attorney Tom Trask asked the vice-mayor, and Karr made the decision to schedule another continuance with an eye toward making a final decision Jan. 15.

Afterward, Mayor Alahouzos spoke about the latest development in the long-running saga of the property.

“I’m very glad we have this process in place because it gives everyone the opportunity to express their opinion,” he said by phone, noting he participated in the meeting from his City Hall office while quarantining following a holiday trip to Greece. “This property has a history from Walmart and different groups don’t want to see anything there and that’s why everyone is coming out for this.”

When asked if he felt the matter would be decided on Jan. 15, Alahouzos said, “Yes, we’re going to finalize it next week because we just have to read the correspondence from the public then turn it over to the BOC to discuss and vote on it. It’s going to be a long meeting again, but we’re going to go to the meeting, look at the facts and make a decision based on the evidence presented to us.”