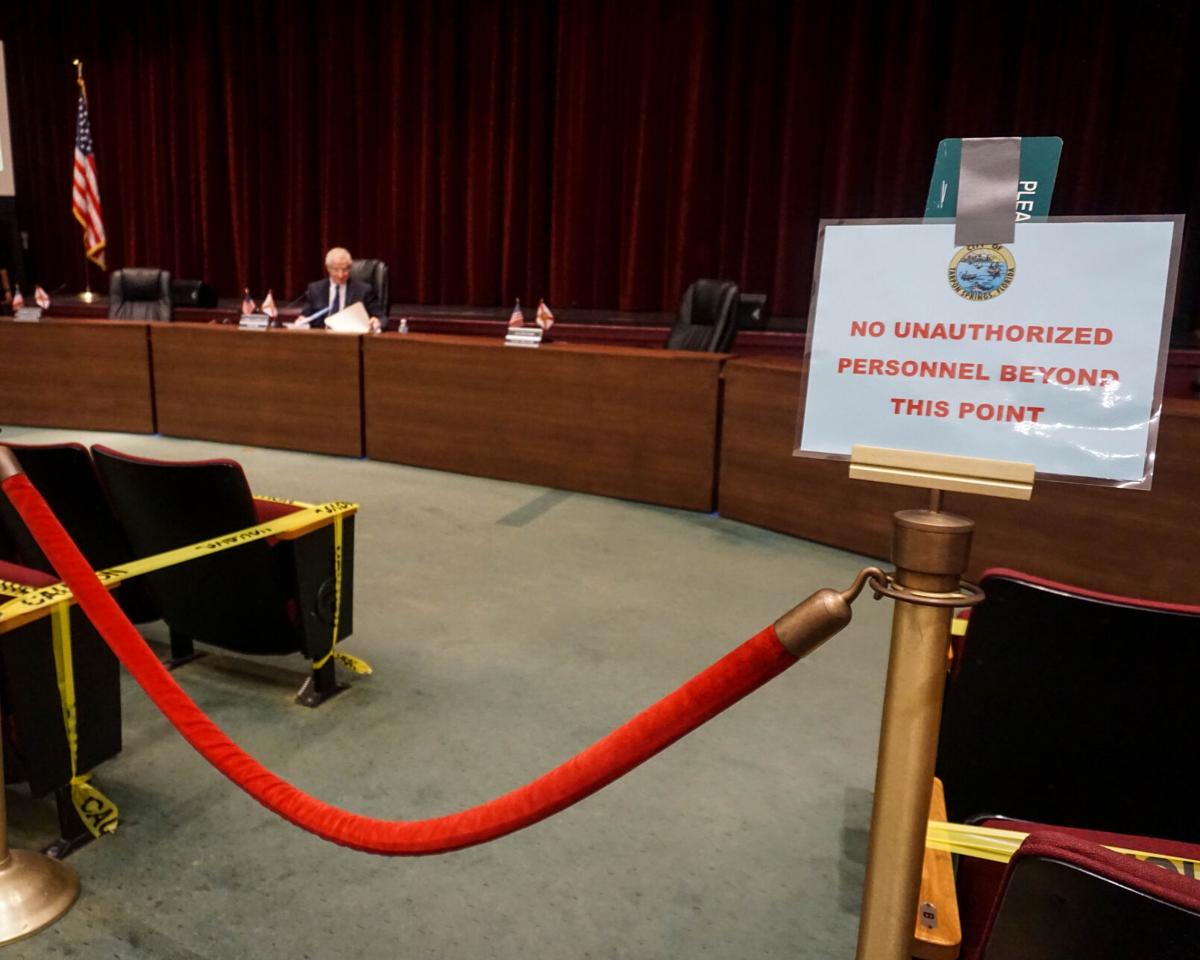 The Tarpon Springs City Commission convened at City Hall on Nov. 9 for a town hall meeting about the Sponge Docks. It was the board’s first in-person meeting since the start of the coronavirus pandemic in late March. 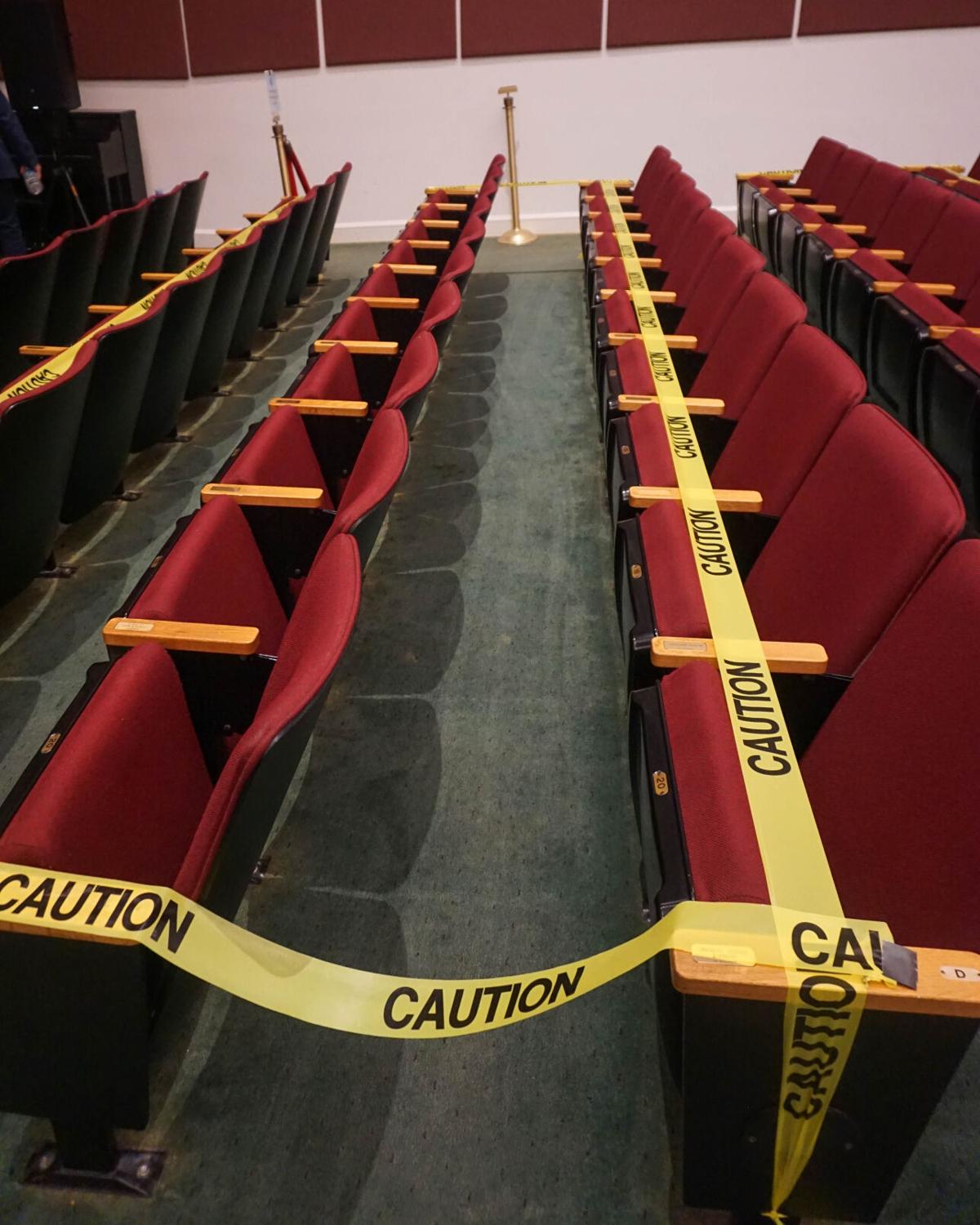 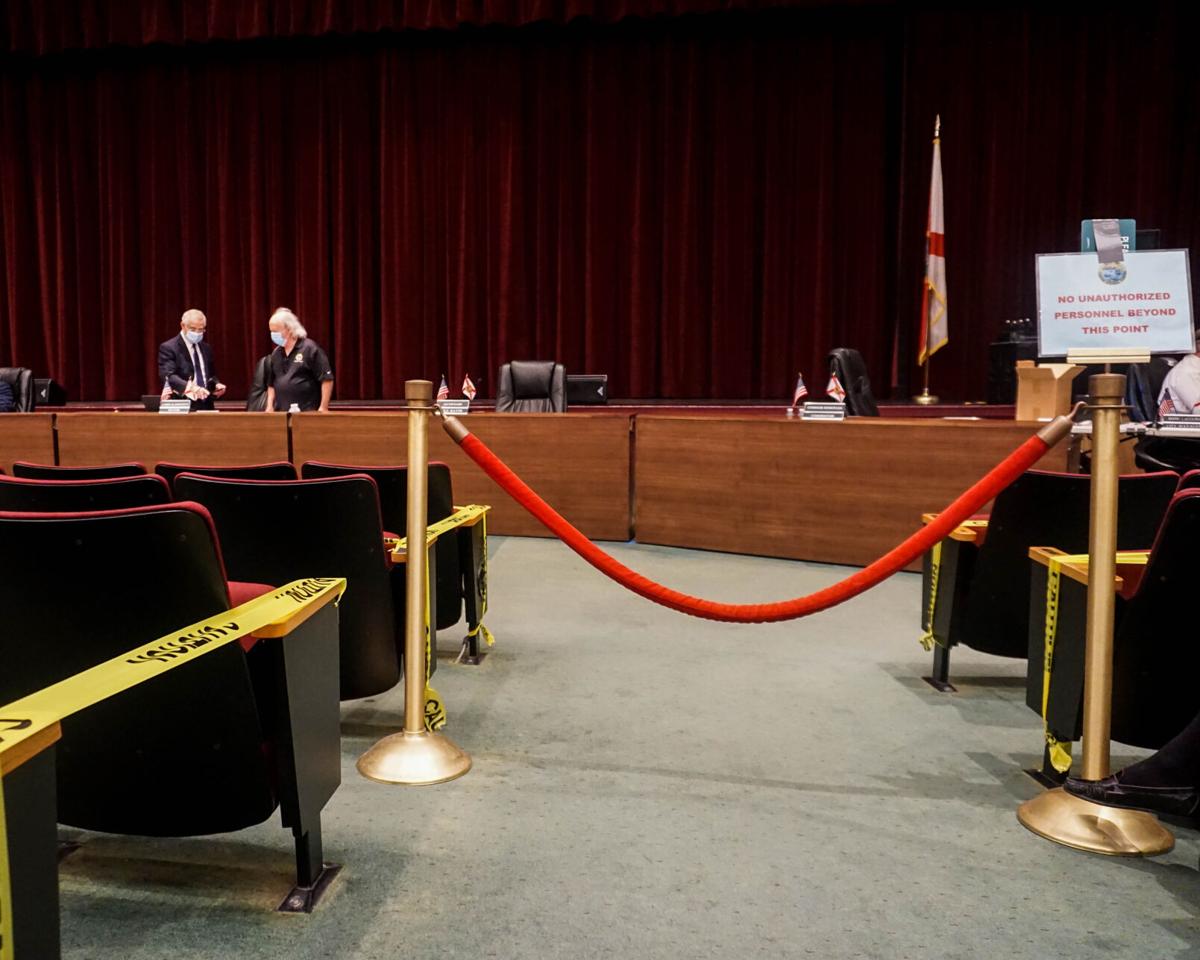 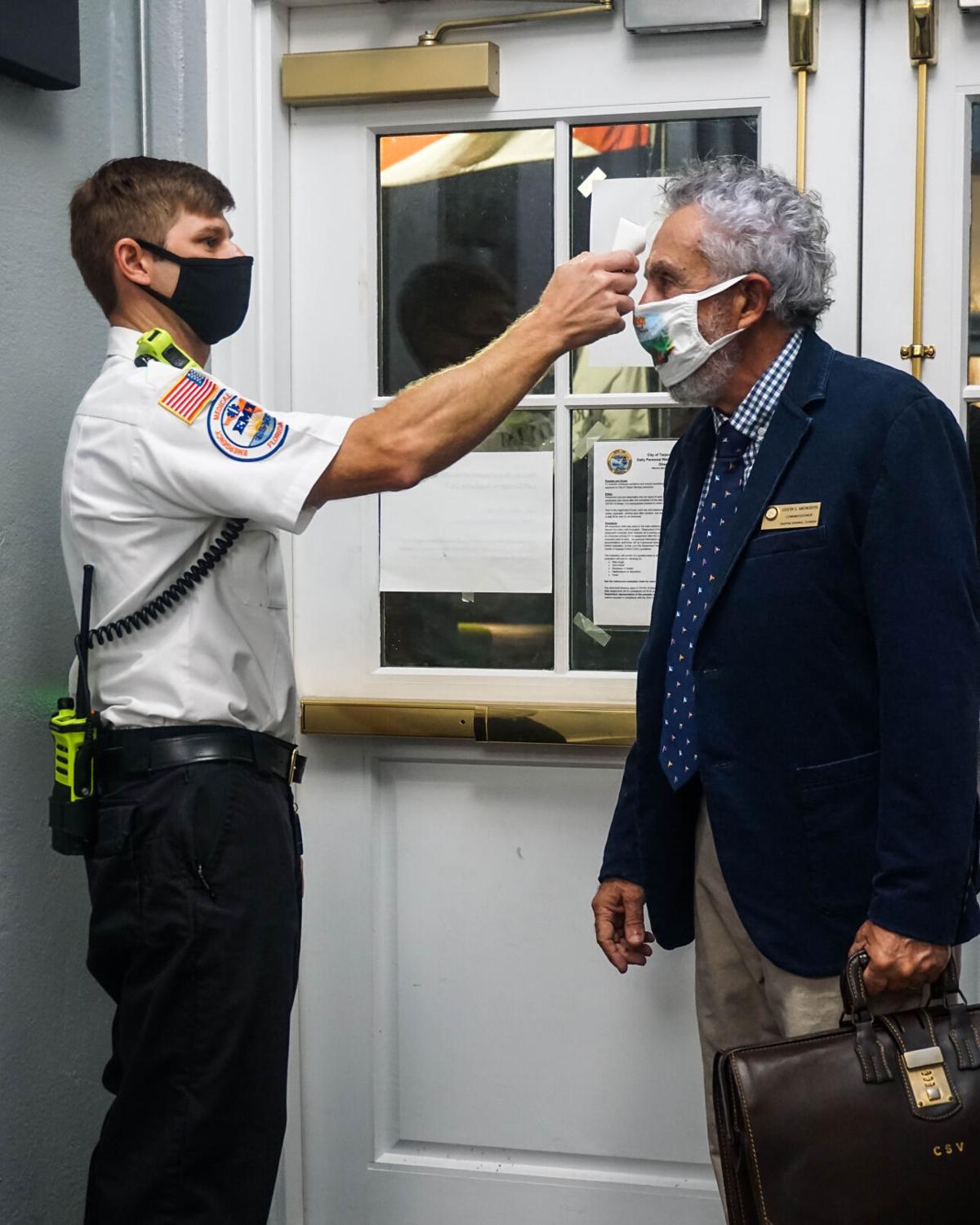 Tarpon Springs City Commissioner Costa Vatikiotis had his temperature checked upon entering City Hall on Nov. 9 for the first in-person meeting of the Board of Commissioners since the coronavirus crisis began in late March.

The Tarpon Springs City Commission convened at City Hall on Nov. 9 for a town hall meeting about the Sponge Docks. It was the board’s first in-person meeting since the start of the coronavirus pandemic in late March.

Tarpon Springs City Commissioner Costa Vatikiotis had his temperature checked upon entering City Hall on Nov. 9 for the first in-person meeting of the Board of Commissioners since the coronavirus crisis began in late March.

TARPON SPRINGS — City commissioners convened at City Hall for the first time in more than seven months Nov. 9, as they held a town hall meeting to discuss issues affecting the Sponge Docks. It was the first public meeting since the coronavirus crisis hit in late March.

For attendees, the post-COVID changes were immediately apparent: each person, including the commissioners and city staff, had their temperature checked upon entering the building; several rows of the former high school auditorium were sectioned off with yellow caution tape to maximize social distancing; and masks were mandatory for all.

Adding to the surroundings, the five commissioners sat socially distanced at a new dais while other city officials sat at folding tables off to the side. And in a sign of how long it had been since the last in-person meeting, Commissioner Costa Vatikiotis was seated at the dais for the first time since being elected to Seat 2 in March.

“It’s good to be back in City Hall,” Mayor Chris Alahouzos said at the start of the two-hour session. “This is actually our first meeting in person since the coronavirus suspended all the in-house meetings … but we still have to follow CDC guidelines. This is very important, and I appreciate your cooperation.”

The town hall, which was supposed to be held earlier this year, didn’t offer any real insight or solutions to the many issues affecting the docks. According to City Manager Mark LeCouris, those were scheduled to be detailed during the board’s next regular session Nov. 17.

Still, more than a dozen business owners, community leaders and residents took to the podium now situated at the end of the aisle to rattle off a list of needs for the historic tourist district, including additional lighting, free public parking, palm trees to replace the oak trees, an entryway sign spanning Dodecanese Boulevard and more special events.

Former commissioner Rea Sieber, who owns a wine shop at the docks and represents a Tarpon Springs Merchants Association subset of area business owners, noted flooding is “still a big issue on the docks.” She also asked the commission to act quickly on certain measures, such as installing 15 illuminated art boxes commissioned by the Public Art Committee and coming up with ideas to help celebrate the holidays, including installing a new sound system that is reportedly in the works.

“One of the things we hope for is that it is installed by the holidays,” Sieber said of the system, which according to a proposal would feature 16 speakers placed on light poles and provide ambient music throughout the docks. She also said the merchants would like to have a Christmas tree lighting on the second Saturday in December to coincide with a special holiday shopping event.

“Our merchants are suffering, not only on the docks but through the whole city,” she said, adding, “we missed the (tourist) season and we don’t want to miss the holidays, as well.”

Following the public comments, the commissioners provided feedback, with the suggestions for more lighting, parking, music and a gateway sign earning unanimous support from the board. The meeting concluded with LeCouris reminding everyone many of the suggestions would be addressed on the 17th.

Afterward, Alahouzos commented on the issues at the docks and the commission’s return to City Hall.

“The Sponge Docks is very important not only to our culture but to our local economy, as well,” he said. “So, it was important to have this town hall meeting, and it felt good to be back. Everyone followed the protocols and the CDC guidelines and they socially distanced. So, it was nice to be back conducting city business in front of the residents of Tarpon Springs.”

For Commissioner Vatikiotis, being face to face with his constituents for the first time was a welcome change. “Sitting at the dais is different,” he said via email. “On Zoom, you are up close and can see the Commissioners speak clearly. For me, who lost a little hearing in the Navy, it is sometimes difficult to understand people speaking through face masks. However, I enjoy seeing the residents, something that you cannot do on Zoom.”