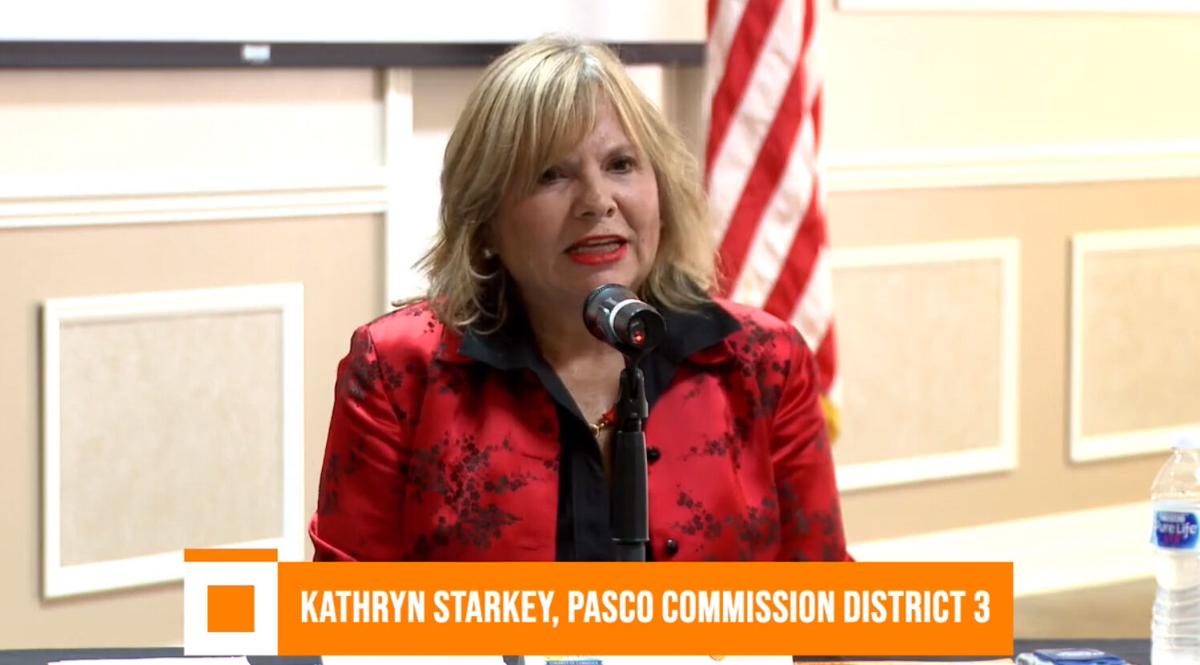 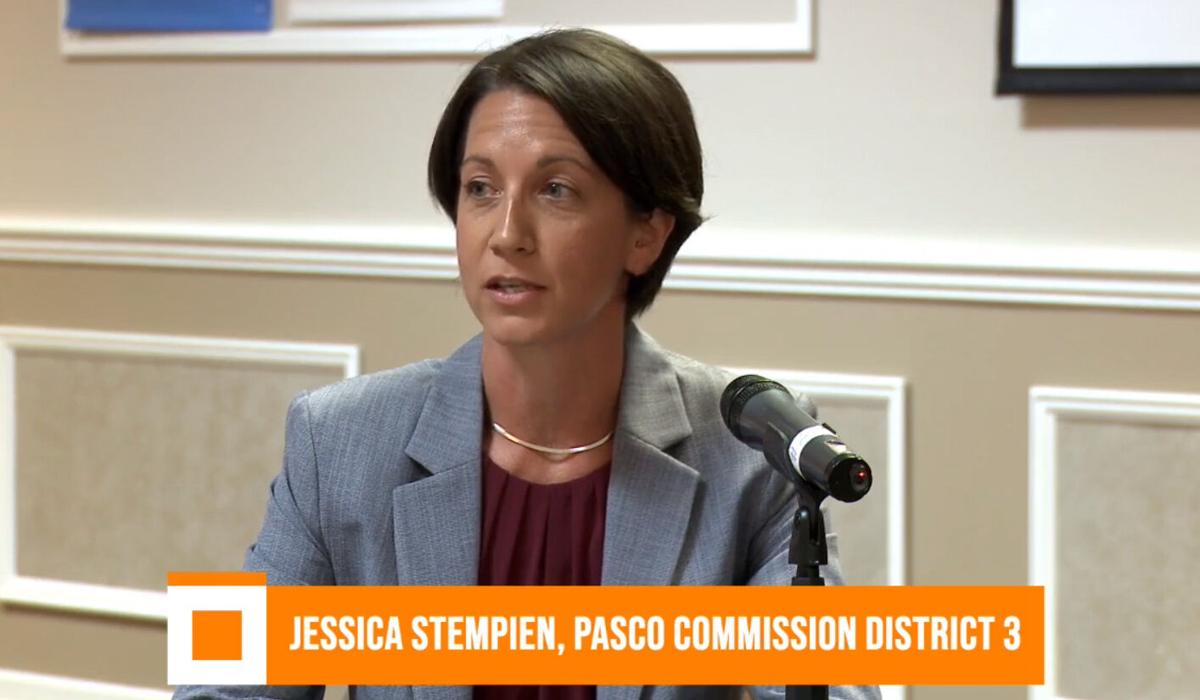 NEW PORT RICHEY — The race to represent District 3 on the Pasco County Commission features an incumbent seeking her fifth career electoral victory and a political newcomer with a long background in government work.

Incumbent Kathryn Starkey, a Republican, and challenger Jessica Stempien, a Democrat, participated in their first debate of the 2020 election season Sept. 28 at the Greater Pasco Chamber of Commerce. The debate, organized by the Chamber and the West Pasco Board of Realtors, featured candidates competing in five total races. Four of these involve districts reaching west of the Suncoast Parkway: Pasco County Commission Districts 3 and 5, and State House Districts 36 and 37. All four debates will be featured in upcoming editions, beginning here with the race for County Commission District 3.

Moderated by Tampa Bay Times education reporter Jeffrey Solochek, the candidates shared views for about 30 minutes on topics ranging from managing growth and economic development throughout the county, renewing the Penny for Pasco tax initiative, the possibility of minimum wages rising to $15, funding for the Pasco County Sheriff’s Office and the county’s handling of the coronavirus pandemic.

Keeping up with growth and economic development

“Florida is a growth state and Pasco County has been a bedroom county for so long and so many of our people were heading south,” Starkey said. “While yes, we’re growing with residences, we’re also growing with businesses. It’s been a challenge, but I think we’re doing it well. One-third of the county is preserved and we’re buying more and more each year. We just bought tens of thousands of acres in the Land O’ Lakes area.”

Preserving land and better managing current developed areas struggling with stormwater runoff and flooding were a pair of issues Stempien championed throughout the debate, along with increasing resident involvement in governmental decisions.

“What I’m hearing from constituents is that they’re concerned about the growth,” Stempien said. “What I plan to do is make sure the county is updating their comprehensive plan, which is the plan that lays out how the county will grow for the future, which has not been updated since 2006.”

The challenger added she would like to enact a Citizen’s Planning Bill of Rights to increase transparency by getting people more involved in the process.

Starkey added she believes the county has done well managing growth that continues coming to the area whether current residents like it or not.

“The fact of the matter is we have a great state, a great county and people want to move here, and we just don’t have a way to lock the doors and keep them out,” Starkey said. “So we have to manage it the best we can.

“We’re growing fast but I think we’re growing in a good way,” she continued. “The challenge is still transportation, definitely. Traffic. I think you’ll see a big improvement when Ridge Road opens on the (State Road) 54 corridor.”

Penny for Pasco, a local government infrastructure surtax residents have twice approved since March 2004, provides funds for everything from economic development projects and transportation infrastructure improvements to school facility enhancements and purchasing land for conservation.

Both candidates favor continuing the 1% sales tax when it hits ballots in the near future. The current 10-year renewal period, which was supported by 70% of voters, collects revenues through Dec. 31, 2024.

“I think we should continue Penny for Pasco and I think we need to focus on preservation,” Stempien said, adding she would like to create a citizen advisory committee for environmental and preservation issues. The current citizen advisory committee involved with the county’s Environmental Lands Acquisition and Management Program needs to be more diverse and be “looking at the whole picture,” she said.

Penny for Pasco money, which collected $320 million over its first 10 years and is expected to generate more than $700 million during its second decade, is divided between the county, Pasco County Schools and the county’s municipalities at a 45-45-10 percentage split, respectively.

“The school district needs their money, we need the money for transportation and that money we have for economic development is a great tool to help us build our economy,” Starkey said.

All Florida voters will get to weigh in on a constitutional amendment that would incrementally increase the statewide minimum wage to $15 an hour by 2026.

Amendment 2 was the issue the candidates differed on most.

“I don’t like government mandates. I like as less as possible,” Starkey said. “So I don’t think I would be in support of that. I think it would put a lot of businesses out and a lot of people out of jobs.”

“What I’m hearing from constituents is they want higher paying jobs,” Stempien said. “They want a higher minimum wage. I definitely agree with that and I would like to see it happen.”

Stempien added that she wants to support small businesses by eliminating cost burdens “that are imposing restrictions on them.” She cited the county’s landscape ordinance, which is often touted by Starkey, as burdening small businesses especially now during the COVID pandemic.

Rather than a mandated wage increase, Starkey said she supports workforce training.

“My answer to people who are at a minimum wage job is let me help you get a better job,” she said. “I am all about bringing resources to anybody who wants to help themselves get a better job.”

Both candidates voiced their support for the Pasco County Sheriff’s Office, with Stempien being more wary of the department’s use of intelligence-led policing.

Starkey stated that the Sheriff’s Office remains underfunded in comparison to bordering Hillsborough and Pinellas counties, even after funding increases generated by a property tax rate increase.

Law enforcement is another area of government that can become more transparent, Stempien said, pushing for the formation of a resident-based group that would look at the county’s entire budget and provide recommendations.

“I support the Sheriff’s Office and what they’re trying to do in the community,” Stempien said. “I think that residents need to be involved in how our money is spent and we as a board need to listen to them.”

The Sheriff’s Office’s use of intelligence-led policing has been debated recently, following a Tampa Bay Times investigative report. The practice, which attempts to use data and analytics to assess and manage crime, has been controversial locally because opponents claim it targets and harasses individuals who are not doing anything illegal.

“What I don’t support (based on that article) is the harassment of citizens who have gone through the process,” Stempien said. “We want everyone in our county to feel safe, whether they have been convicted of a felony, been through the system, or not.”

Starkey said she believes intelligence-led policing “has some very good aspects to it” but some instances “have been a little overzealous and we don’t want harassment of our citizens.”

Authorizing the face-covering ordinance and keeping it in place until health officials say it’s time to do so are stances held by Starkey and Stempien.

“I think it’s important we continue the mask mandate for a while,” Starkey said. “It’s not easy to ask people to wear masks, it’s not always comfortable, but I think it’s the right thing to do to help keep our community safe.”

“I think it’s important that we continue to do it for the safety of our teachers, our students and our elderly and vulnerable people in this county,” Stempien said.

The challenger added that the now months-long mask mandate has helped some businesses recover by making people feel safe enough to come to Pasco.

“In fact, the hotel occupancy rates were up this month and almost at the same place they were last year because people feel safe coming to our county because of this face covering ordinance.”