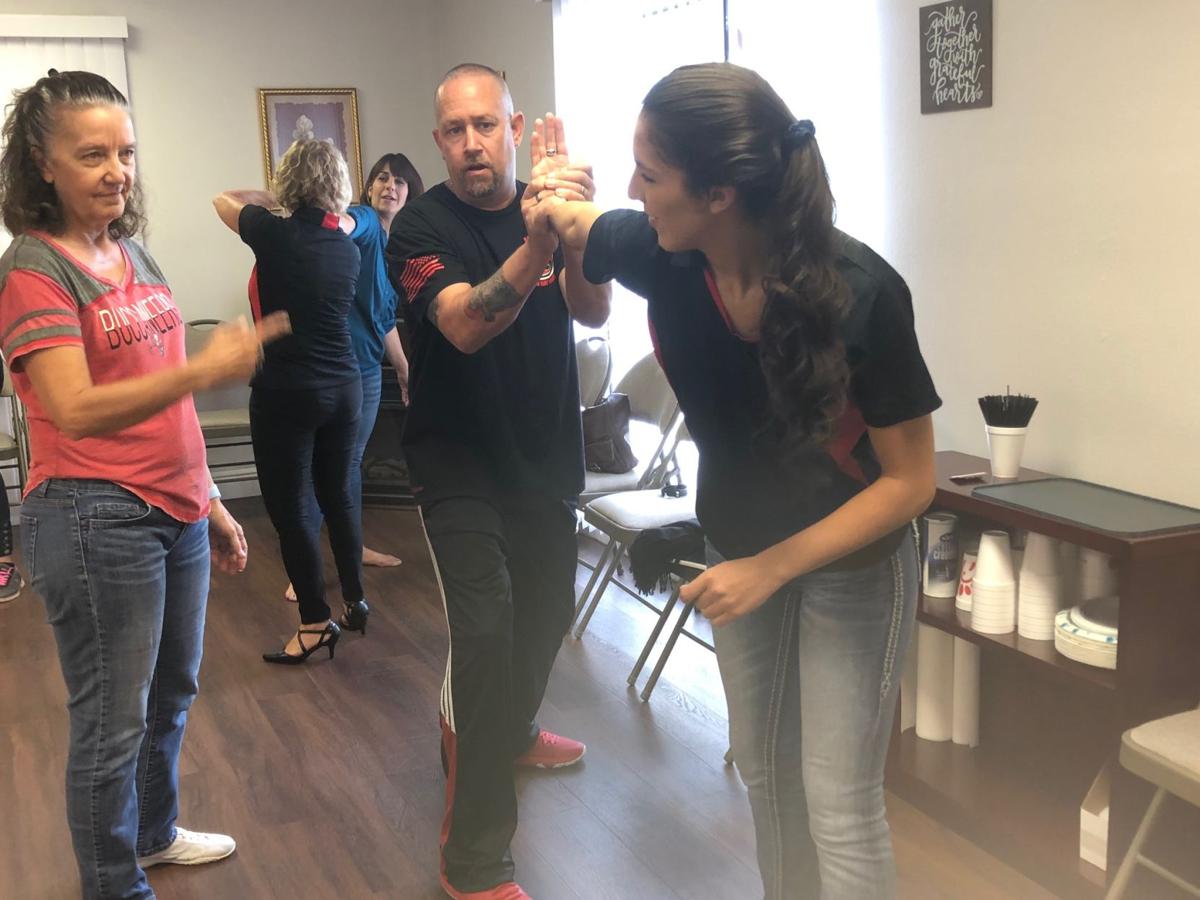 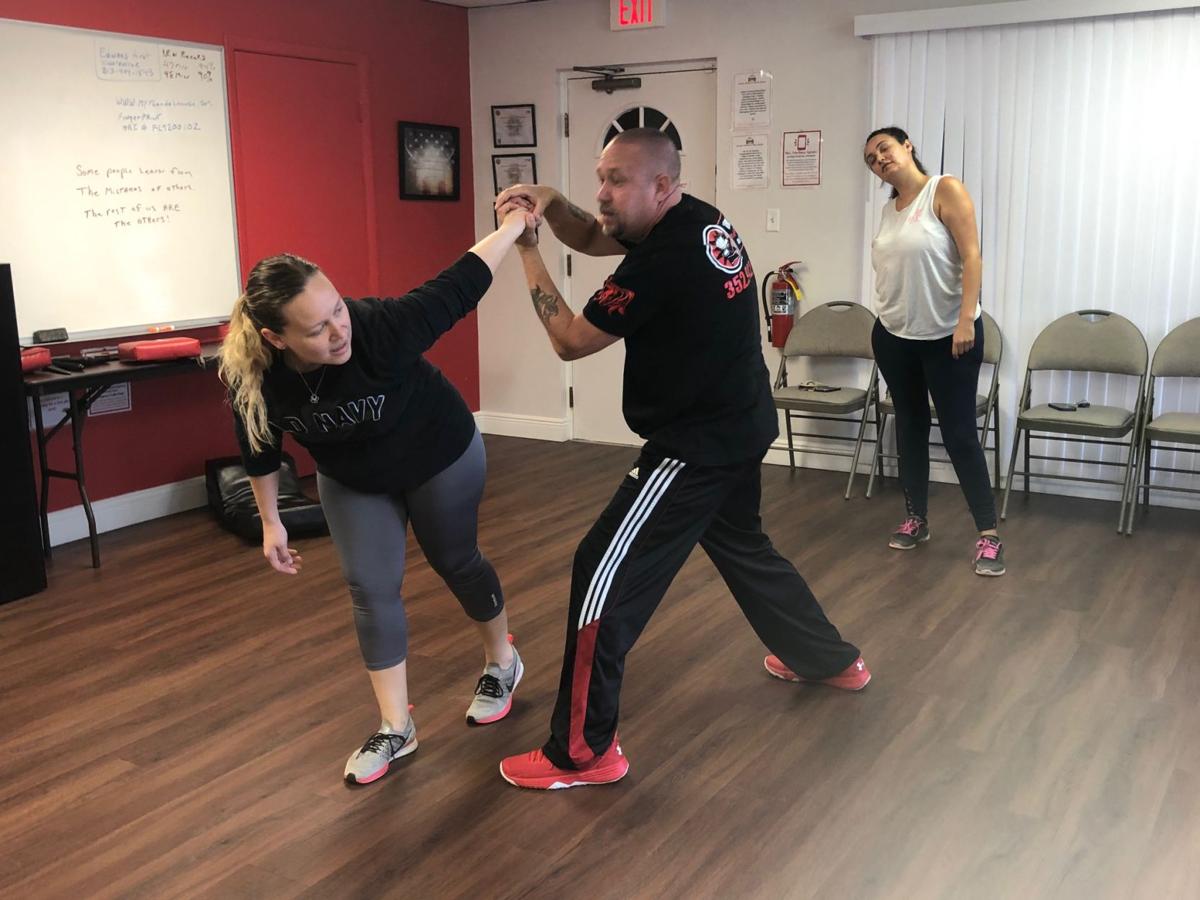 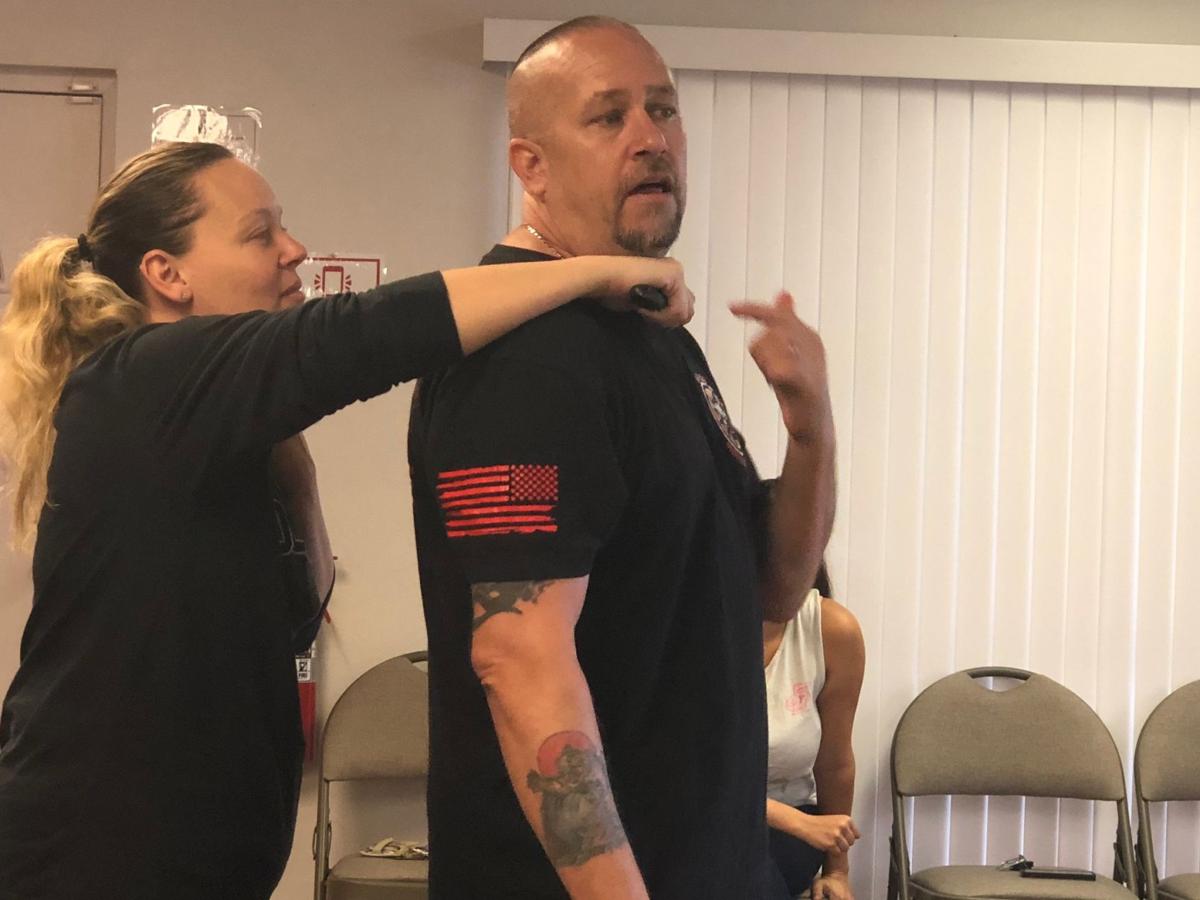 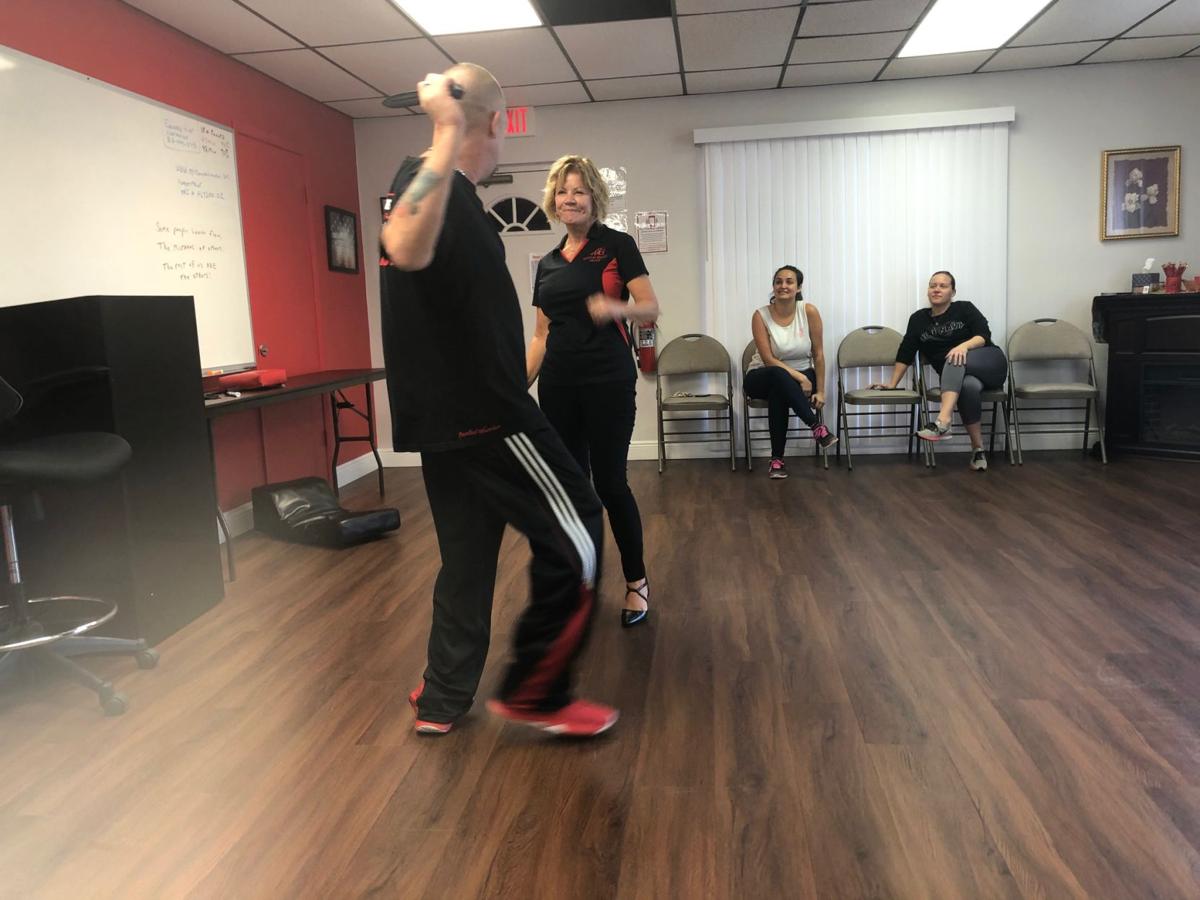 Burgess attempts a knife attack on Leslie Chew in a self-defense exercise. 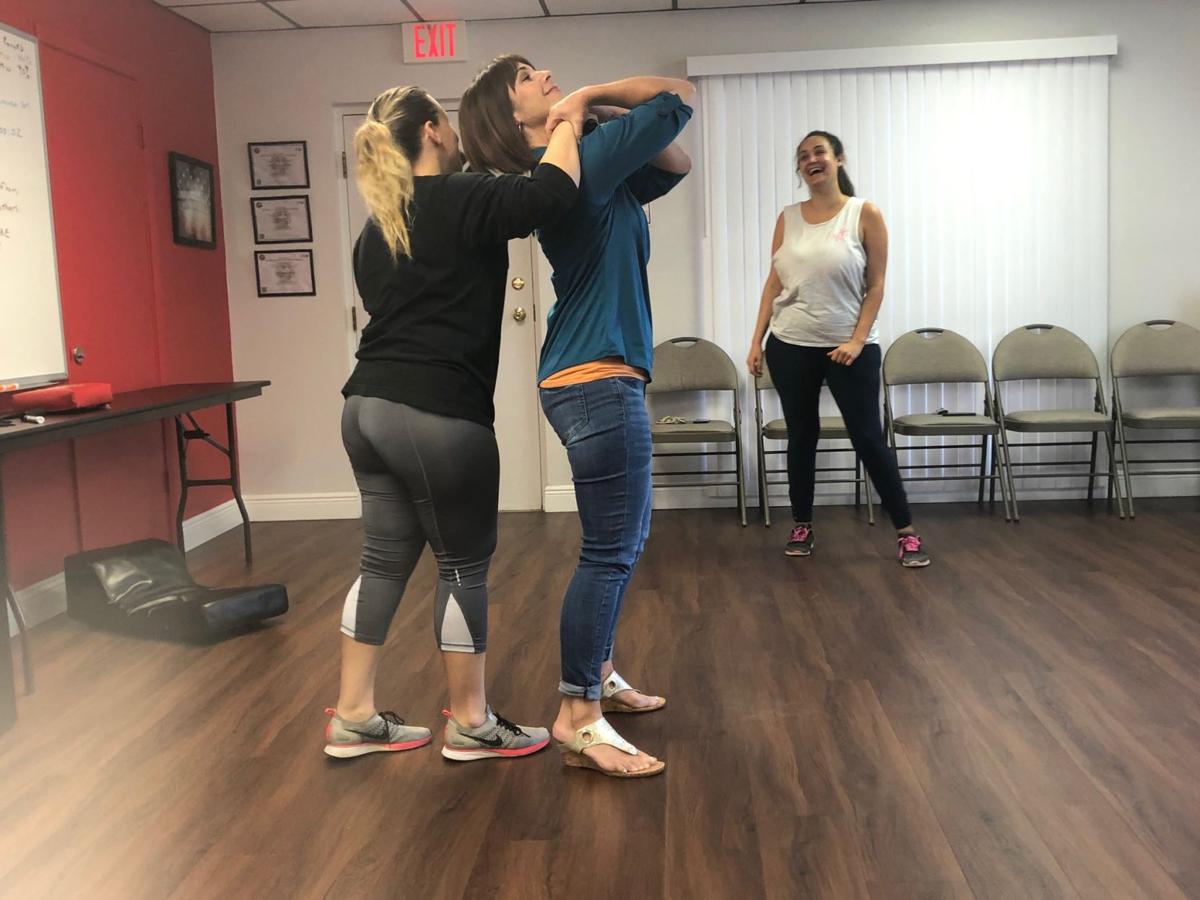 Nicole Rivera and Amanda DePablo engage in a shuffle over a knife in a role play scenario during the seminar on self-defense for real estate professionals. 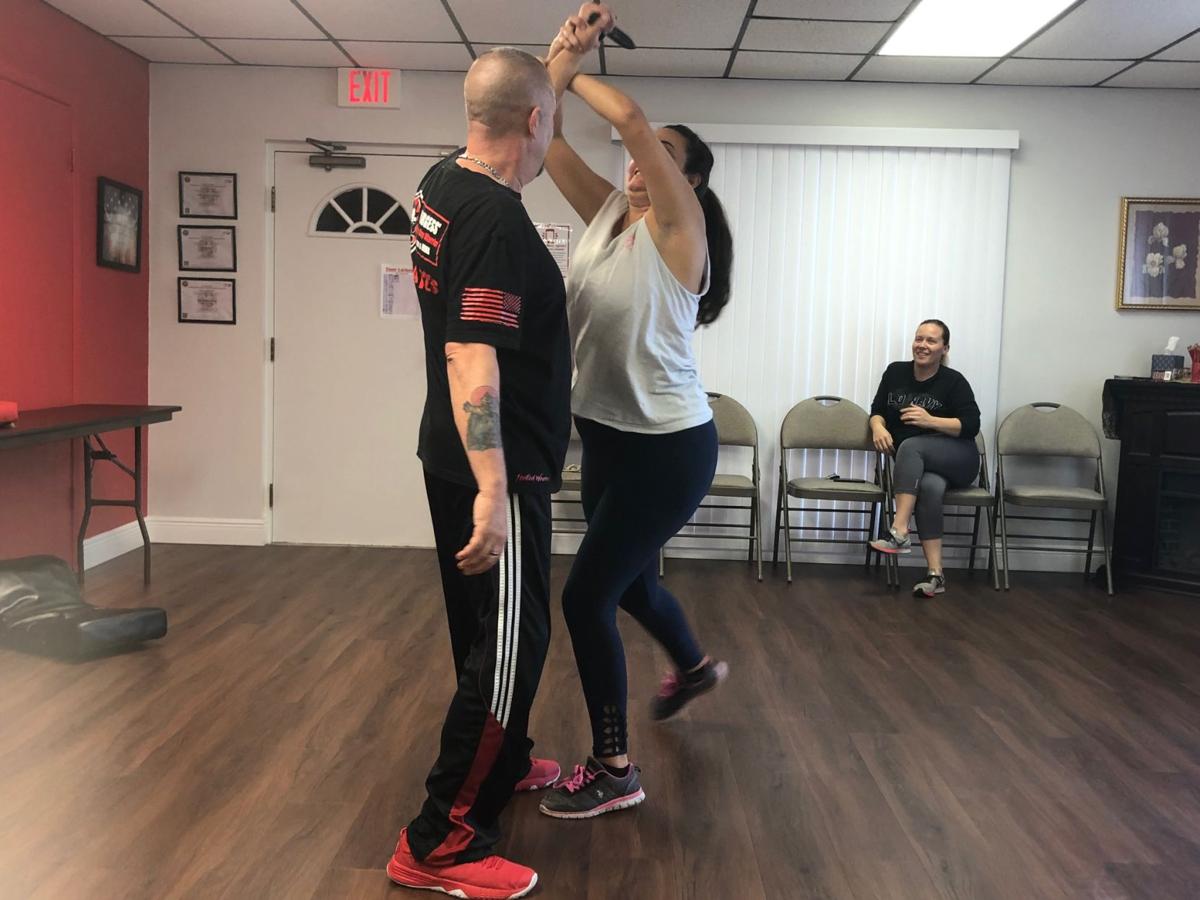 Burgess attempts a knife attack on Leslie Chew in a self-defense exercise.

Nicole Rivera and Amanda DePablo engage in a shuffle over a knife in a role play scenario during the seminar on self-defense for real estate professionals.

SPRING HILL — Women can be at a physical disadvantage when facing a potentially dangerous encounter with a male aggressor. But female real estate professionals, who often must place themselves in compromising environments, can be particularly vulnerable.

The industry is designed to bring real estate professionals and clients together, usually in a vacant house and often in unfamiliar neighborhoods. While protocols may be in place to vet clients before agents take them out and to encourage open communication efforts that keep tabs on an agent’s whereabouts, it may not be enough. Many agents, mostly women, are turning to self-defense training as a proactive barrier between themselves and potential danger.

The three-hour session was held at Ashton School of Real Estate, on Commercial Way. Six female agents from different companies participated in an interactive class that included discussion and instruction on potential scenarios. They practiced specific moves designed to disadvantage an attacker.

Five of the six participants were new to the industry, in business for roughly a year or less, with one a veteran agent of 20 years. All were aware of recent attacks on real estate professionals. Some even shared stories of their own frightening experiences.

While everyone had some form of protection in place, they agreed they needed a physical solution to fend off potential danger.

Burgess discussed certain techniques everyone should embrace no matter the circumstances. Situational awareness was a big one, he said. Knowing the surroundings, identifying exits or escape routes, encouraging constant observation to better recognize signs of danger and listening to gut feelings of unrest are all important lines of defense, he said.

He also demonstrated techniques that are effective against an attacker. They included self-defense maneuvers like ground fighting, escaping, and physically attacking weak spots like eyes, ears, throat, groin and knees.

Participants role played through situations, practicing maneuvers designed to put an attacker in the weaker position. They also practiced with mock weapons, learning effective techniques to get a knife, firearm or other object away from their attacker and perhaps use it in their own defense.

“I decided to do this after seeing several things about (real estate agents) being attacked while showing houses,” Burgess said. He hoped giving them the empowerment of education would potentially save their lives.

Burgess, who has taught local students karate and martial arts for decades, is in process of obtaining his real estate license.

“Since I am working on becoming a real estate agent, I thought it would be a great idea to help them be more prepared and safe when they are showing houses.” He approached Lisa Ashton of Ashton School of Real Estate about presenting a seminar at her school.

Burgess has been a karate and mixed martial arts teacher, or sensei, for well over three decades. He became an instructor to empower children who might feel vulnerable and are perhaps at risk of being victims of bullying.

In Burgess’ case, martial arts training helped him build his own self-esteem. “I was the little kid,” he said, “and I didn’t want to get picked on.”

He began training when he was just 6 years old in his home country, England. He moved to the United States when he was 19 and progressively advanced in his passion as a professional fighter and martial arts instructor.

For more information, contact Burgess Modern Day Warrior Karate and MMA at 352-942-7236. The Dojo is at 4660 Commercial Way, Spring Hill.