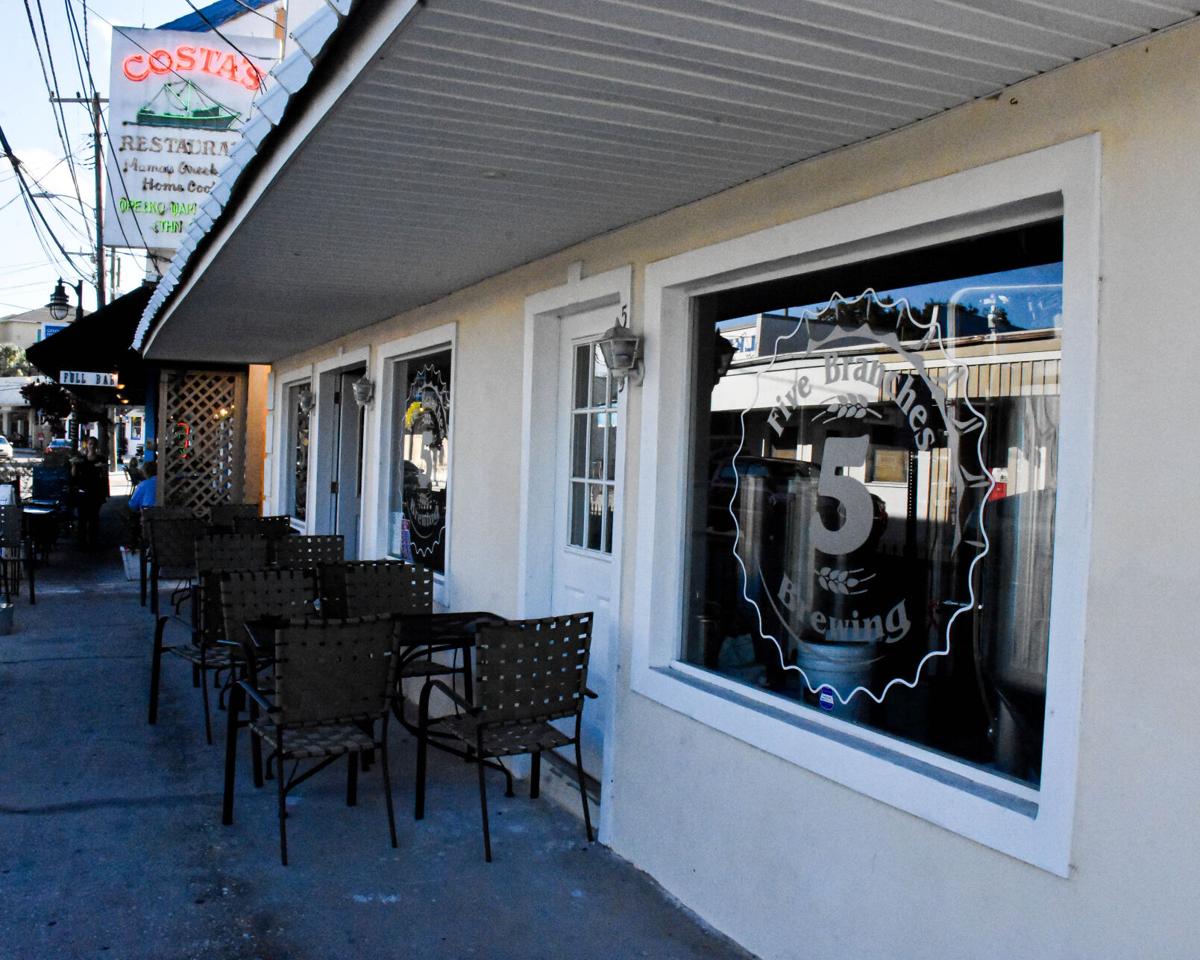 5 Branches Brewing is a veteran-owned, military-themed establishment at 531 Athens St. on the Tarpon Springs Sponge Docks. 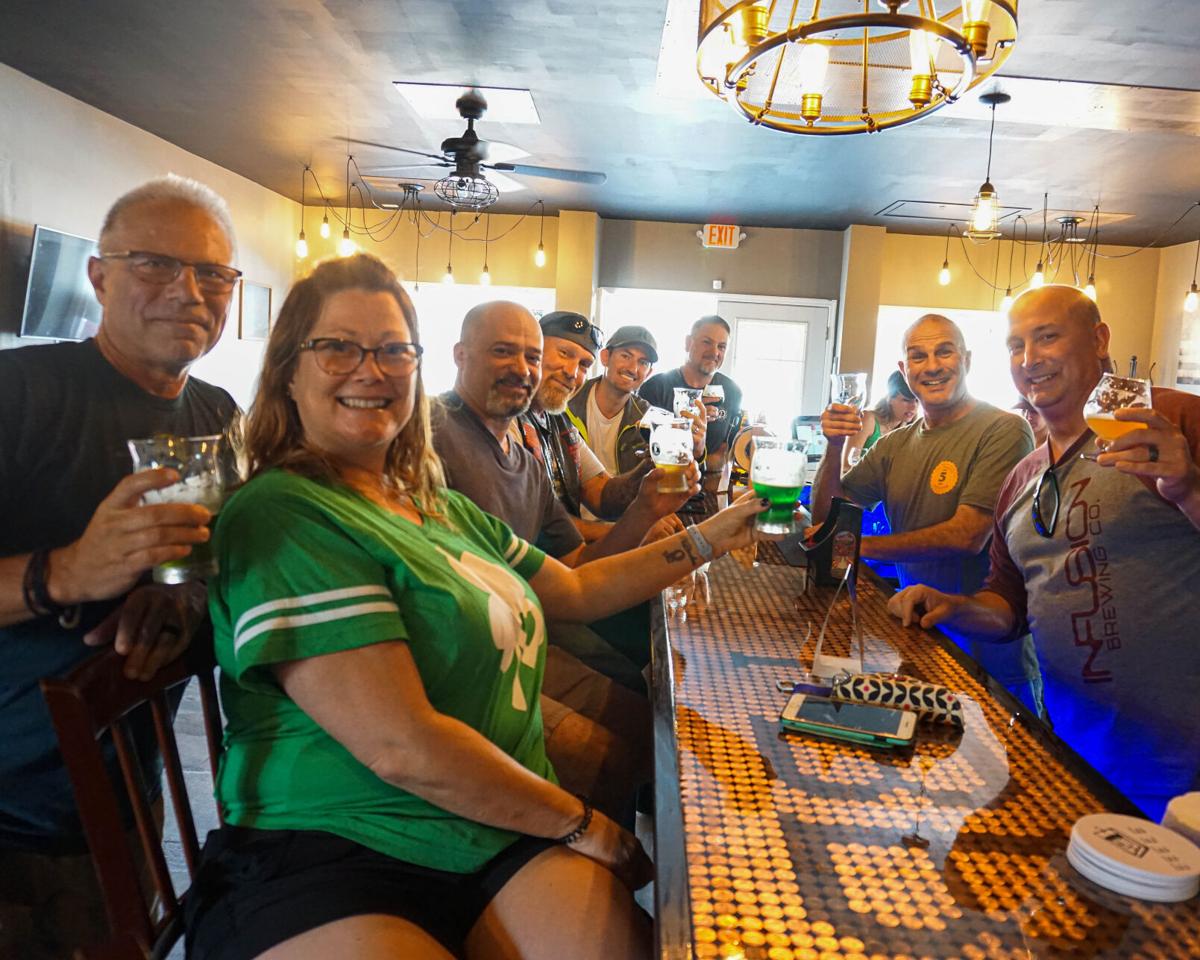 5 Branches Brewing owners Ramey Simpson, front right, and Jerry Brown, back right, celebrated with a group of patrons as they counted down the final pints poured before a statewide shutdown caused by the coronavirus pandemic went into effect at 5 p.m. on St. Patrick’s Day, March 17. 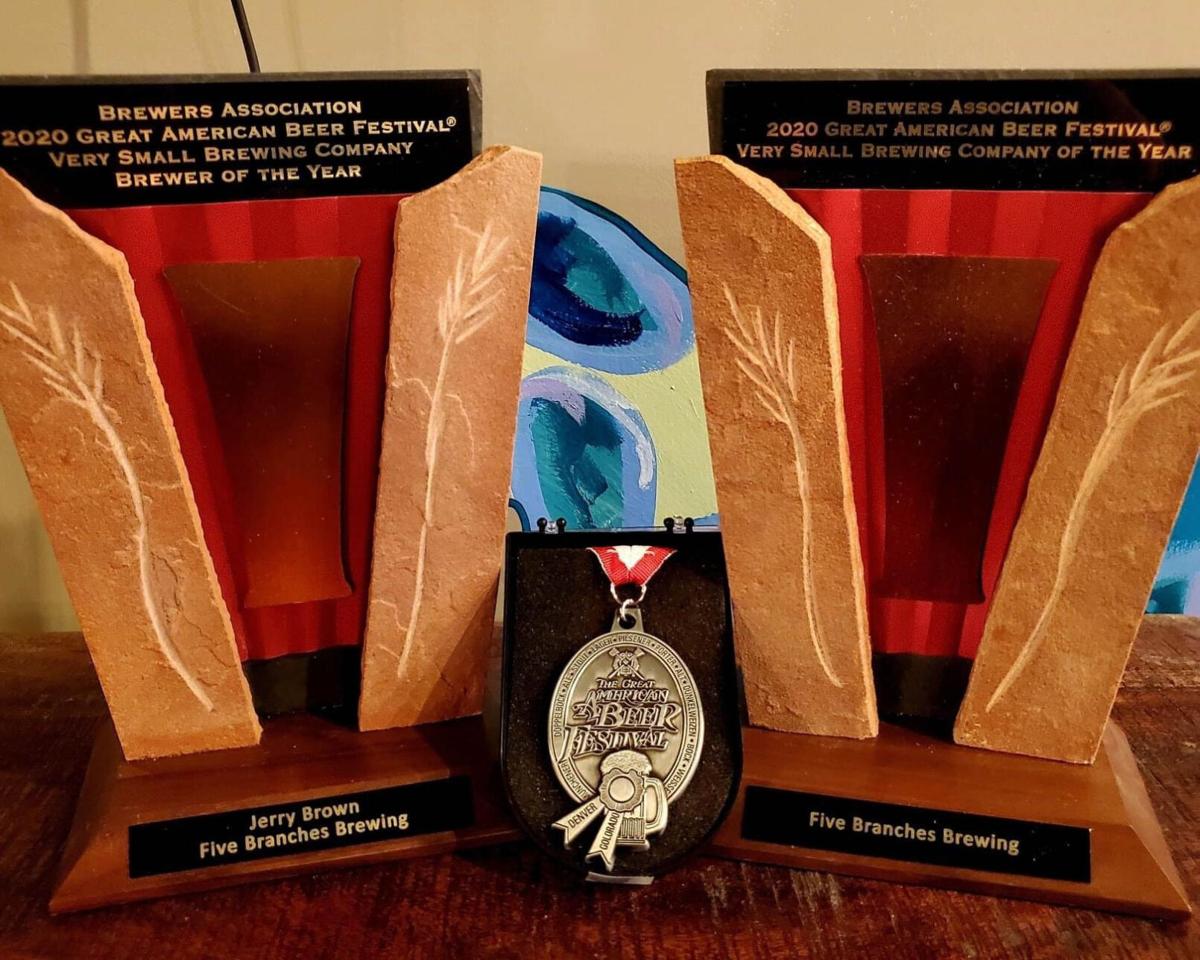 5 Branches Brewing is a veteran-owned, military-themed establishment at 531 Athens St. on the Tarpon Springs Sponge Docks.

5 Branches Brewing owners Ramey Simpson, front right, and Jerry Brown, back right, celebrated with a group of patrons as they counted down the final pints poured before a statewide shutdown caused by the coronavirus pandemic went into effect at 5 p.m. on St. Patrick’s Day, March 17.

TARPON SPRINGS — As 5 Branches Brewing co-owner Ramey Simpson poured his final pints in advance of a state-mandated shutdown due to the coronavirus at 5 p.m. on St. Patrick’s Day, he admitted the military-themed brewery, located at 531 Athens St. on the Sponge Docks, might not make it through the lockdown.

“We were finally breaking through, but now we can’t honestly say we’re going to make it,” Simpson, an active member of the Air Force, said March 17, noting he and his co-owner, fellow active military member Jerry Brown, “would report to our units and do our jobs. Hopefully we’ll introduce some new beers during a grand reopening ceremony soon. But if that happens or not will depend on how long we are closed. I can survive a month. Anything longer and the future will definitely be in doubt.”

Flash forward a few months and 5 Branches not only survived the summer of COVID-19, it’s come out the other side even stronger, having recently won a silver medal for their “Doggin’ Wrench” Imperial Stout in addition to the taking home the coveted Very Small Brewing Company and Very Small Brewing Company Brewer of the Year awards at the 34th annual Great American Beer Festival.

The hardware haul, plus the easing of indoor drinking and dining restrictions that were especially tough on breweries without food service, have the 5 Branches brain trust resting a little easier today, although Simpson cautioned they are not out of the woods yet.

“It’s been a tough year. Very stressful,” Simpson said by phone on Nov. 4, a few weeks before 5 Branches will host its one-year anniversary party on Friday, Nov. 27. “Jerry and I had to do a lot of adjustments in plans to keep this thing going. Business isn’t back to 100 percent yet … but when the shutdown happened, we focused on a lot of the lessons we learned and we made a lot of changes and focused on brewing beer, and that has definitely paid off. So in weird kind of way, that kind of helped us. There’s still a lot of hurdles to overcome. We’re still learning how to be a brewery. But it’s all about sacrifices.”

Now that their business is back on track and they own some impressive hardware — according to Simpson, no Florida brewery or brewer has ever won the GABF Very Small Brewing awards — Simpson said he and Ramey are focusing on the future.

In addition to the upcoming anniversary party, 5 Branches recently announced a collaboration with crosstown neighbor Unrefined Brewing on a beer honoring veterans called Those Who Served.

“We were both thinking of doing something for Veterans Day because Unrefined has some military veterans in their ownership group, so the idea was to get together and do a collaboration,” Simpson said. Unrefined is producing a special sour while 5 Branches will create a citrus IPA. “Both beers will be available on tap and in four-packs at both breweries beginning on Friday, Nov. 6, and one dollar from each pint and four dollars for each four-pack sold will go to Paws for Patriots, a nonprofit organization that pairs veterans with therapy dogs,” he said.

In a press release announcing the beer release, Unrefined co-owner Tommy Scott said, “We are constantly looking at ways to give back to the local community. Two members of our core ownership group served in the Army and Marines and joining forces with 5 Branches Brewing on a collaboration that honors America’s veterans and raises money for Tarpon Springs veterans just made perfect sense to us.”

Brown, a 24-year veteran of the U.S. Army, added, “Now that Ramey and I are starting to pass the torch to the next generation, we have been thrilled to build a venue where we honor those who serve others. Our country was founded in taverns and bars, what better place than to celebrate who we are as a nation?”

As he prepared for what he hopes is a busy November, highlighted by a mustache-themed promotion and an album release as well as the anniversary party, Simpson admitted 5 Branches is “still trying to develop its niche.”

But with strong backing from the community, loyal employees and a slew of new trophies on the shelf, he feels much better about their position now than he did back in March.

“Our employees have been great, and we have a few loyal patrons who have really been there for us and kept supporting us and that’s really helped,” he said. “There’s been a lot of sacrifices made to keep this dream alive, and the validation we’re receiving now is awesome.”