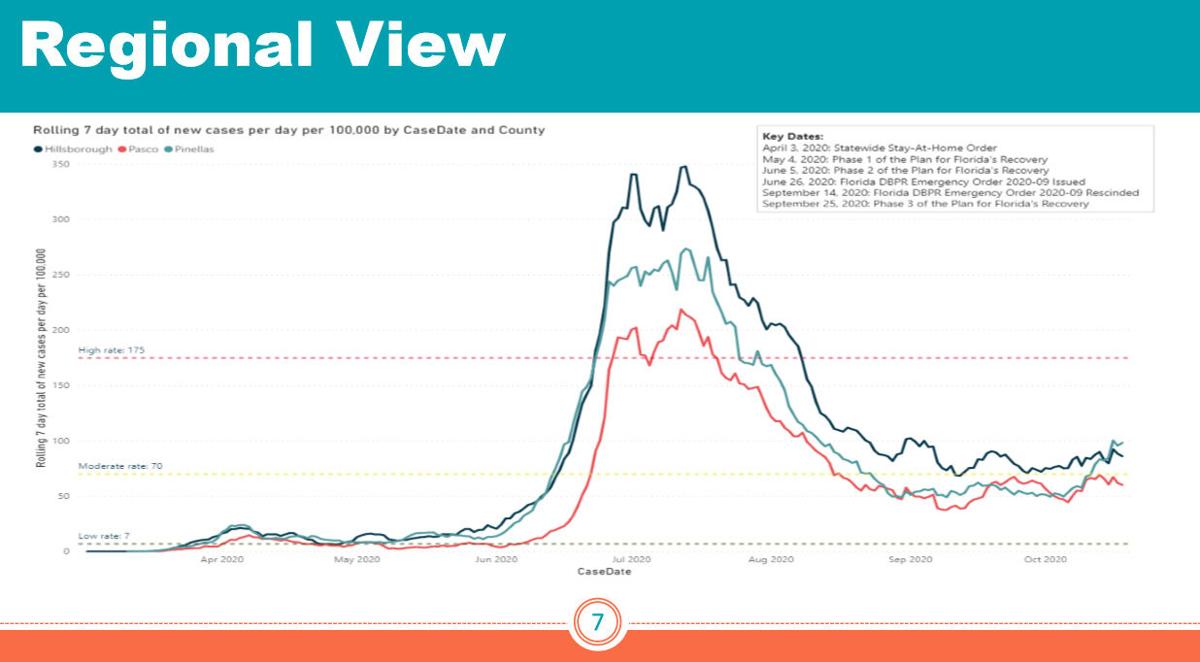 A line graph showing positive COVID-19 cases in Hillsborough, Pasco and Pinellas counties. The lines mirroring each other shows how regional cooperation among the counties has been effective in reducing positive cases, a local health official told the Pasco County Board of County Commissioners.

Florida Department of Health in Pasco County Administrator Mike Napier provided the Pasco County Board of County Commissioners with his latest COVID-19 update at the Oct. 20 public meeting.

A line graph showing positive COVID-19 cases in Hillsborough, Pasco and Pinellas counties. The lines mirroring each other shows how regional cooperation among the counties has been effective in reducing positive cases, a local health official told the Pasco County Board of County Commissioners.

Florida Department of Health in Pasco County Administrator Mike Napier provided the Pasco County Board of County Commissioners with his latest COVID-19 update at the Oct. 20 public meeting.

NEW PORT RICHEY — Masks are staying on for the time being in Pasco County.

County commissioners received a COVID-19 pandemic update from Florida Department of Health in Pasco County Administrator Mike Napier at their Oct. 20 regular meeting and it wasn’t an uplifting report.

“It’s been 30 days since the last update, and I wish I had better news,” Napier said. “Our goal when we talked last time was let’s see what the data looks like and maybe we can make revisions.”

What the data showed was a growing number of COVID cases throughout Pasco County.

As of Oct. 19, there were 10,294 total positive cases in the county and a 3.5% increase over the last seven days, with 358 cases reported. The rolling seven-day average of positive cases per day was 53, which is up from the 49 per day it was at previously.

“Back in early September we were below 3% on the seven-day rolling average,” Napier said. “Now each day over the last several days we’re eking up to 5%.

Among the slides Napier displayed was a line graph depicting positive cases in Hillsborough, Pasco and Pinellas counties. Although total case numbers are different, the trends of the three lines mimicked each other over recent months.

“It demonstrates that we work lockstep when we talk about our regional approach,” Napier said. “While our numbers are lower because of per capita it does demonstrate that we are one community when it comes to our cases.”

“I’ve got to give a shoutout to the school system,” he said. “They’ve been great in working with the students and faculty and the health department and working in letting parents know as soon as we have a positive case.”

As of Oct. 22, the school district’s website reported 184 positive student cases and 77 positive employee cases. Those positive cases have affected 3,485 students and 360 employees. Impacted means they’ve come in contact with someone who tested positive and had to isolate for a period before returning to school.

Napier added that schools “are not driving our case increases.”

A roughly 30-minute discussion amongst commissioners and Napier followed the health official’s report, with much of it focusing on the county’s face covering requirements when in public places.

Similar to prior discussions, the board remains split 3-2 to keep the current mask mandate in effect as is. Commissioner Jack Mariano, the most vocal board member against mask requirements, made a motion last Tuesday to change the order’s language to “strongly recommend” when it comes to wearing masks.

“The numbers are staggeringly low and I will tell you that the people I’ve talked to are frustrated,” Mariano said. “I’m all about making it strongly recommended. Let the people that want to wear it wear it. But don’t make it that everybody has to wear it.

“I just want to get the freedom back to the people that want to go and live their lives without it,” he added. “Let them have that choice.”

Wells did say that he looks to local health officials first when gathering information and recommendations on the pandemic, but questioned the real effectiveness of the regional approach Napier outlined because not everyone is doing the same thing. “We’ve got three counties in the region that aren’t making people wear masks,” Wells said, speaking of Citrus, Hernando and Polk.

Commissioners Mike Moore, Ron Oakley and Kathryn Starkey are all in favor of keeping the current face covering requirements in place.

“I’m for it,” Oakley said. “I don’t think it’s time, and with the cases coming up like they are, I think we should continue our mask (policy). I’d feel a lot better if we had a vaccine.”

Starkey mentioned her recent travels to Connecticut, North Carolina and Pennsylvania and said Pasco’s mask requirement is lenient compared to those other places.

“I know the masks are uncomfortable, but we don’t have a strict mask ordinance,” she said. “Because I can tell you that where I’ve been … you have to wear it everywhere.”

Referring to a video and backup research Mariano shared with the board following Napier’s initial report, Moore said he relies more on area medical professionals for information.