An artist’s rendering of the soon-to-be-completed Starkey Ranch K-8 school, which expects to welcome its first students in August. 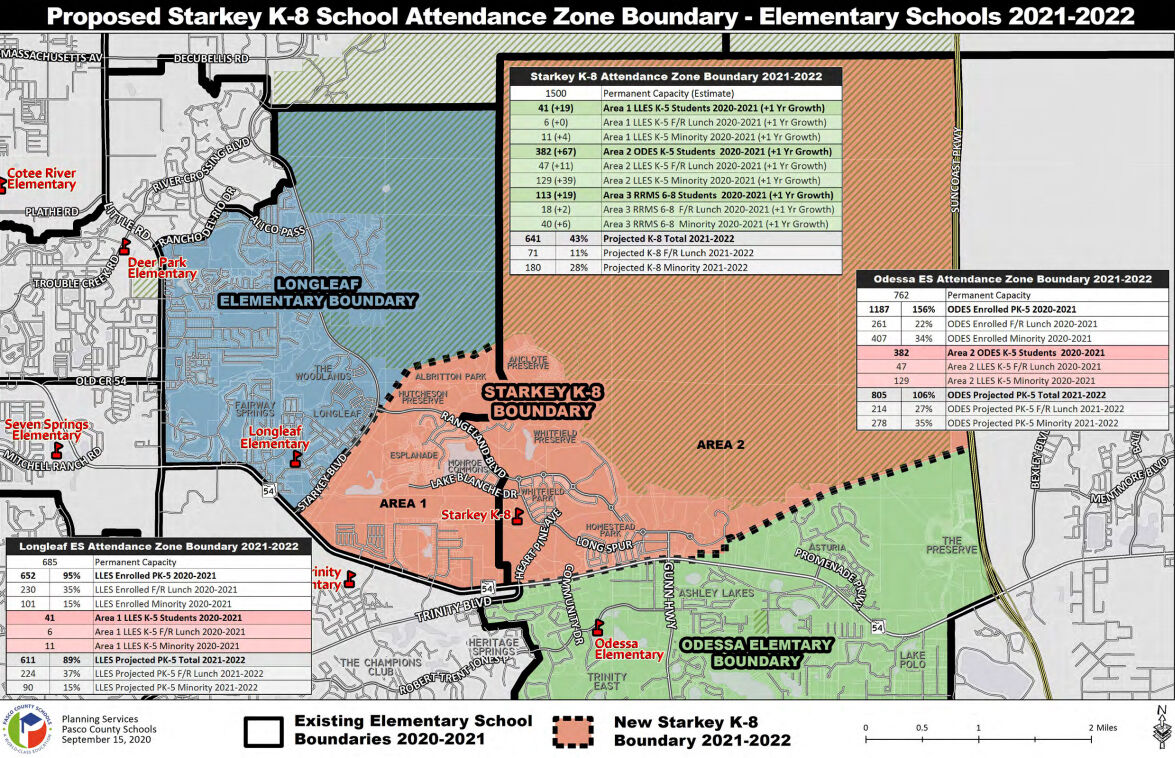 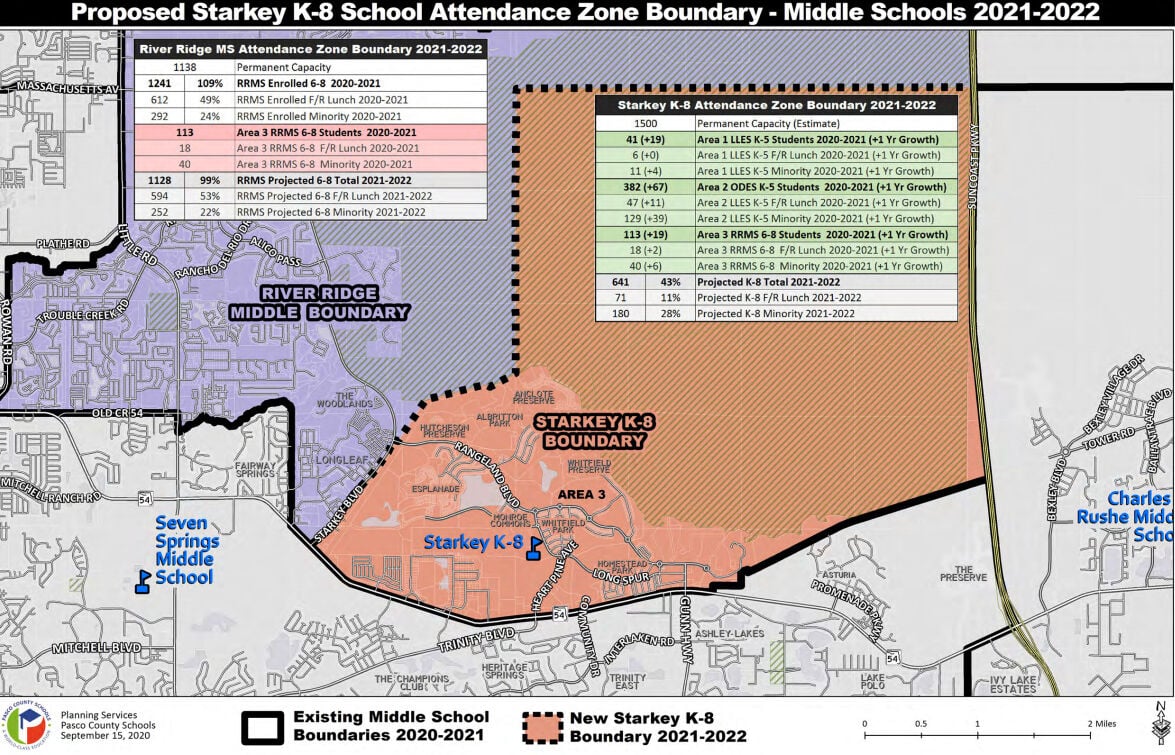 This map shows how the rezoning proposal for Starkey Ranch K-8 would affect one area middle school, River Ridge Middle.

An artist’s rendering of the soon-to-be-completed Starkey Ranch K-8 school, which expects to welcome its first students in August.

This map shows how the rezoning proposal for Starkey Ranch K-8 would affect one area middle school, River Ridge Middle.

LAND O’ LAKES — Starkey Ranch K-8 in Odessa is about nine months away from welcoming its first students and the Pasco County School Board discussed which local children would be populating the new facility.

No formal votes were cast during the Nov. 17 public meeting, but staff briefed the board with its recommended plan.

According to Chris Williams, Pasco County Schools director of Planning Services, the opening of any school necessitates zoning alterations. As it pertains to Starkey Ranch K-8, the district’s proposed rezoning plan would affect three existing schools — two elementary and one middle.

Once open, Starkey Ranch K-8 will be able to house about 1,500 students, Williams said. “Initially the school will open with kindergarten through seventh-grade students. The plan is to grandfather rising eighth graders to their existing school.”

Therefore, the first group of eighth graders graduating on to high school from Starkey Ranch K-8 will be the Class of 2023.

Without an eighth-grade class when first bells ring next August, Williams said the district expects about 750 students to be enrolled.

“That leaves quite a few seats open for magnet school,” he said. “Of course, we will be working to ensure we keep seats available and open for growth in that area.”

According to the Pasco County Schools website, Starkey Ranch K-8 (whose mascot will be the RedHawks) will be a magnet school with the themes of technical fine arts, computer science and world language. “Students will have the opportunity to explore all of these magnet themes in lower grades and then will choose a mini major in grades 4 and 5,” the website states.

Williams said the district drew the lines for its proposed rezone with the future growth of Starkey Ranch in mind. “With the Starkey Ranch development continuing to build houses for the next couple years, we expect growth of about 200 K-8 students per year.”

The Nov. 17 presentation was informational in nature and a vote to set the new zones will come at a future meeting. No public comments were heard or submitted to be read Nov. 17 and no board member raised objections, meaning the rezoning proposal appears likely to pass.

The seats of Pasco County Schools superintendent and two board members were up for election this year and all three incumbents remain.

The trio took their oaths of office at the beginning of last week’s meeting. Before agenda items could be discussed, the board also voted for a new chairman and vice chairman. Allen Altman will replace Beaudoin as chairman and Cynthia Armstrong will become the new vice chairwoman, a title previously held by Altman. Both board members received unanimous support, aside from Altman jokingly voting against himself to replace Beaudoin. His dissent was rendered moot by a 4-1 vote.

“Thank you, fellow board members, and thank you to Ms. Beaudoin for her service in a trying year,” Altman said after the three swapped seats. “You did an outstanding job and on behalf of the board I want to thank you for your leadership.”

Prior to the reorganization votes, Beaudoin took a moment to reflect on the past year.

“Together we have persisted through an extraordinary year,” she said, referring to the board’s response to the global COVID-19 pandemic. “We remained professional and served with dignity during some tense and difficult meetings where tensions were high and comments sometimes became heated.

“Through it all we have expanded opportunities for all of our students, from our youngest learners in pre-K through to our non-traditional adult students,” she added. “We have remained focused on our mission and remained committed to our community. It has been the honor of a lifetime to serve as your board chair.”