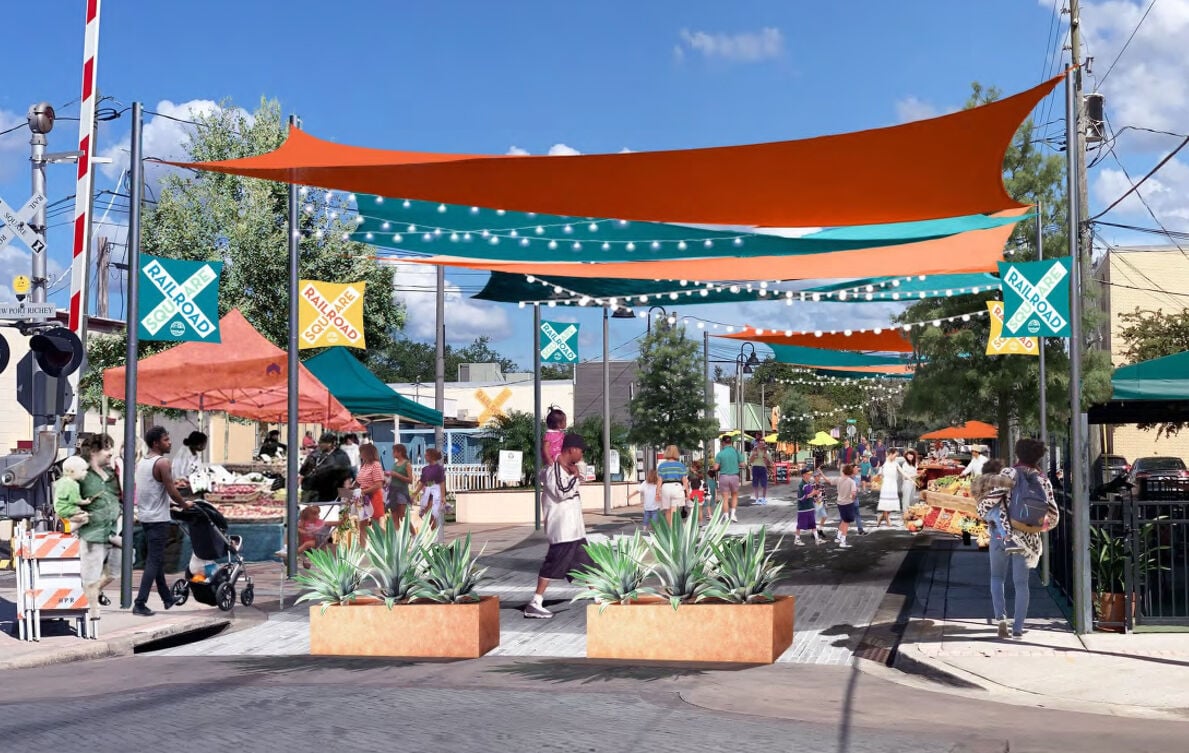 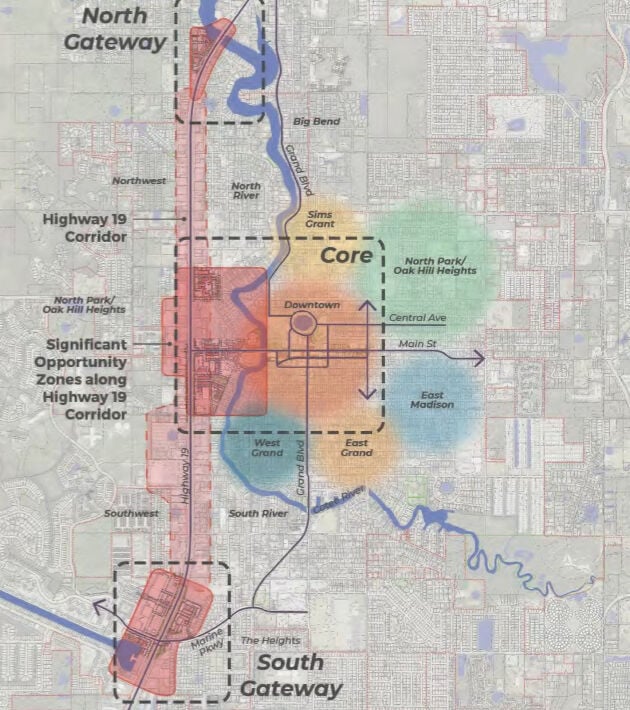 The three areas of focus within a draft master plan for redeveloping and enhancing the U.S. Highway 19 corridor and downtown New Port Richey include the North Gateway, the Core and the South Gateway.

The three areas of focus within a draft master plan for redeveloping and enhancing the U.S. Highway 19 corridor and downtown New Port Richey include the North Gateway, the Core and the South Gateway.

NEW PORT RICHEY — City Council members received an update on an ambitious, long-term effort to slowly redevelop and enhance both the U.S. Highway 19 corridor and the city’s historic downtown during a work session Feb. 23.

The city hired a team of urban planners, developers and marketing professionals in October 2019 to lay out a vision and strategy toward achievement. Roughly 16 months later, the lengthy process is well into its second of two phases.

Tom McGilloway, principal with Baltimore-based Mahan Rykiel Associates Inc., provided a 50-minute presentation of the draft master plan for the future of U.S. 19 and downtown.

“The ideas presented to you last October at a public workshop have been fleshed out with more images to help illustrate the vision,” McGilloway said, referencing an October 2020 public meeting to gather more feedback on preliminary designs.

The scope of the presentation was broad, extending from the U.S. 19 bridge at the border of Port Richey (dubbed the North Gateway) to the downtown and its surrounding districts (the Core) to roughly Trouble Creek Road (the South Gateway).

“What we’re showing is not going to happen overnight,” McGilloway stressed early in the presentation. “Incremental implementation” will be the strategic philosophy used to achieve the final master plan’s numerous, wide-ranging goals.

Draft recommendations for the “Core,” which includes downtown, were broken into two parts: Functional plan elements and geographic plan elements.

McGilloway stated that downtown has “a wealth of parking as is” and that the situation will only improve with the addition of the new garage west of the Main Street Bridge and future improvements to existing parking lots.

“That’s really key for a downtown,” he said. “You want visitors coming, parking their car and then walking to everything.”

“With the public art, I’m really interested in making some changes there and seeing other things we can do,” Council member Matt Murphy said following the presentation.

In the downtown and Railroad Square, landscaping enhancements and the addition of shade were both identified as priorities.

“Railroad Square desperately needs shade,” said Mayor Rob Marlowe. “It is hot as hell most of the year because there is no shade. Whether we put in shade trees or we put in canopies that fly over it, anything to cut that sun. Otherwise you can’t use it accept at night. It’s just brutal.”

The draft master plan included multiple concepts for the expansion of the Sims Park Boat Ramp. The city is discussing the purchase of properties north of the boat ramp. Sitting on the property to the south is the Greater Pasco Chamber of Commerce.

“We heard almost unanimously from everyone at our stakeholder meetings that the chamber, that site, is such an incredible opportunity for the downtown district.”

The inclusion of nearby residential neighborhoods in the group’s draft pleased council members, as well.

“I think all of the neighborhoods we haven’t gone through,” Marlowe said, mentioning improvement plans that stalled out in the past. “We definitely have to spend some effort there.”

Incremental implementation of the plan applies to both the downtown and U.S. 19 corridor. Even more so for the future transformation of the latter, McGilloway said. The process may likely involve a transition to broader usage of existing properties, such as introducing more office or medical space. “Long-term, there’s probably not the market demand for this to remain all retail,” McGilloway said.

Adding an entrance or gateway feature to the intersection of U.S. 19 and Main Street is something that’s been long discussed by the City Council and included in the draft master plan.

“Right now, as you’re driving up and down 19, there’s no visual cue that this intersection is any different than any other,” McGilloway said. “It’s really important to signal the motorist that there’s an amazing downtown just a couple blocks off of 19.”

One suggestion would be to introduce more of the tall palm trees that line Main Street just east of U.S. 19 to all four corners of the large intersection. That idea would require buy-in from private property owners, McGilloway noted.

“I love the palm trees at all four corners of Main (and U.S. 19),” Council member Mike Peters said. “I think that would be a big bang for our dollar.”

The South Gateway area extends from roughly Gulf Drive to Trouble Creek Road. Moving forward with the city’s plans to create a pedestrian/bike overpass across U.S. 19 to improve pathway connectivity is viewed positively in the draft master plan.

“I did appreciate that you gave a strong endorsement to the idea of connecting that bike trail,” Council member Peter Altman said.

The presentation included a suggested list of priorities at the start of its potential implementation. Projects at the top include improving parking wayfinding signage, downtown façade and site improvements, Railroad Square, introducing shade on Main Street, the Sims Park Boat Ramp and Chamber site, U.S. 19 landscape enhancements, and the U.S. 19 pedestrian overpass.

The council was set to hear another presentation related to the draft master plan from the Tampa Bay Regional Planning Council on March 2. Another draft report is projected to be finalized by early March and a final plan may be back to the City Council by mid-to-late April.