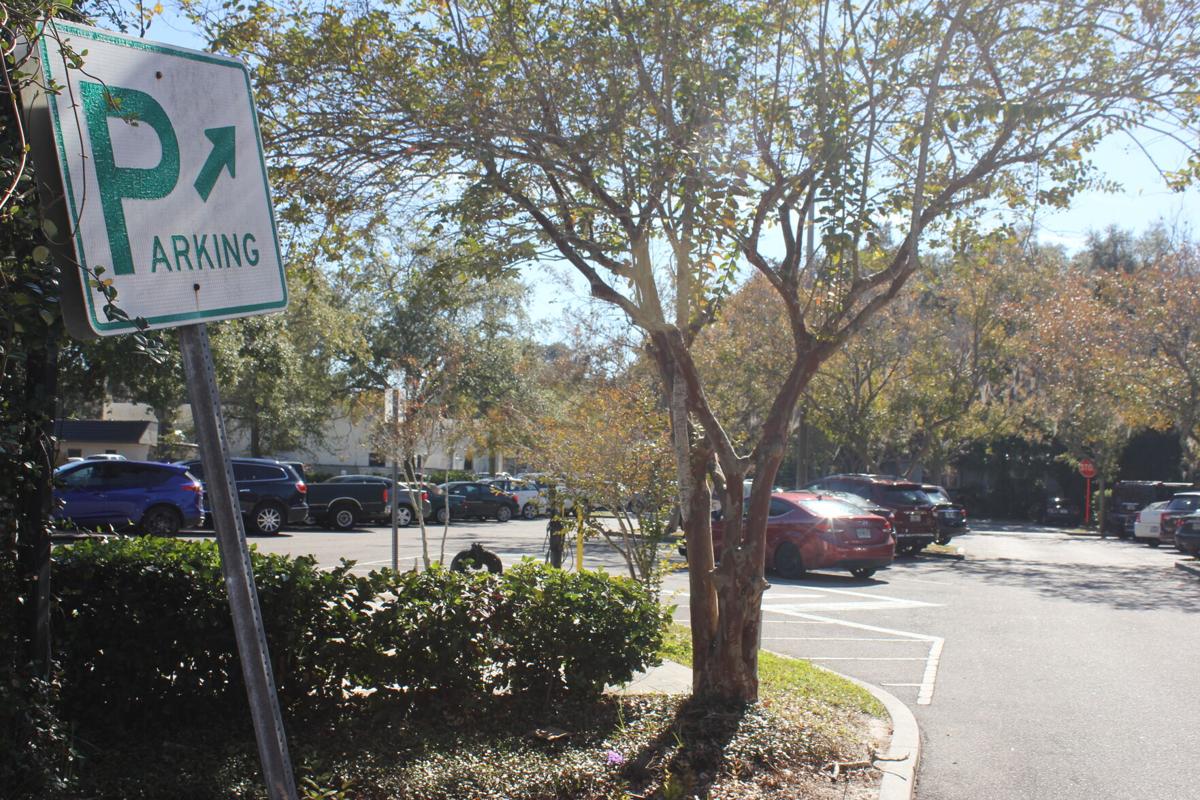 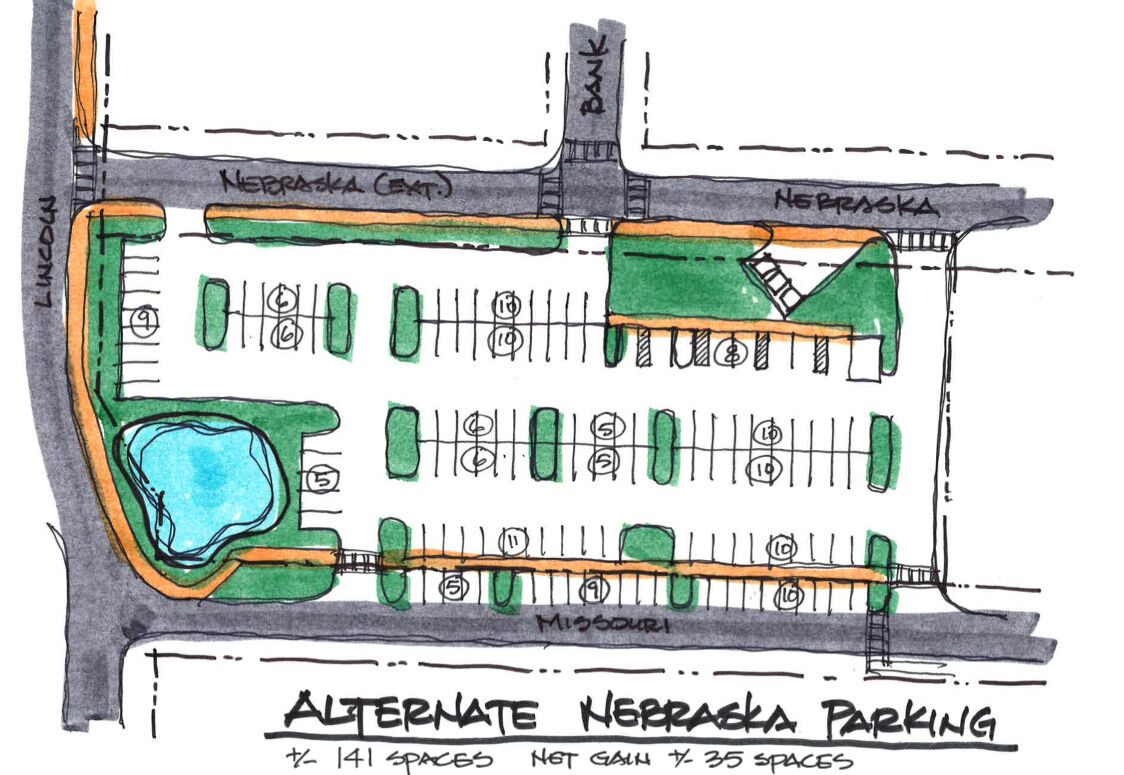 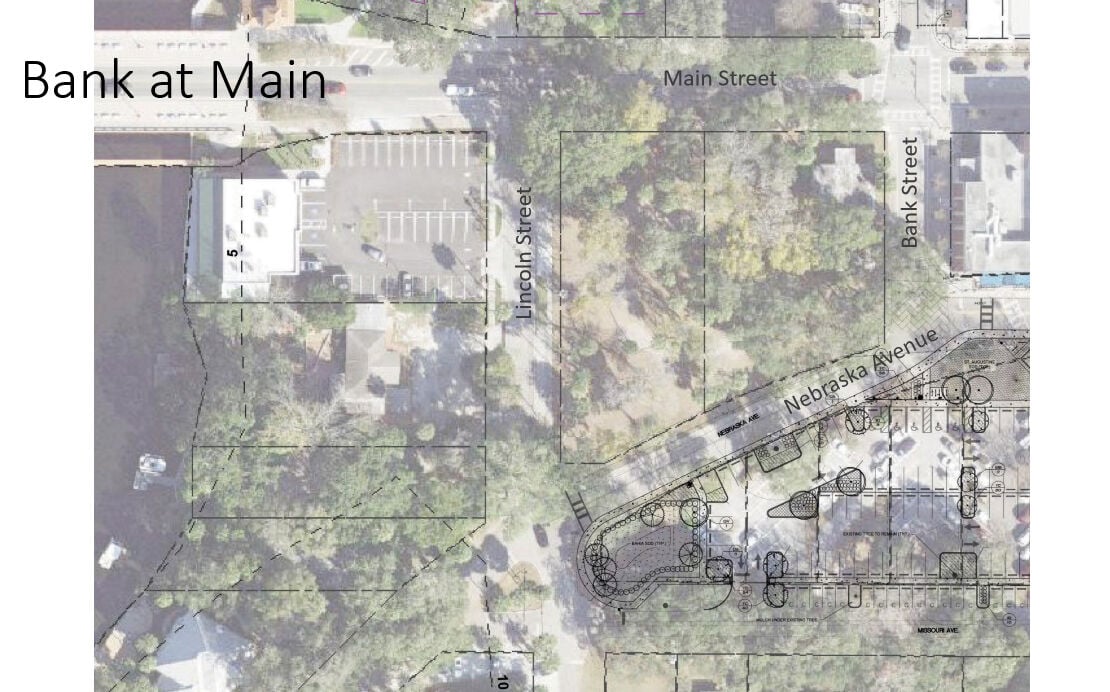 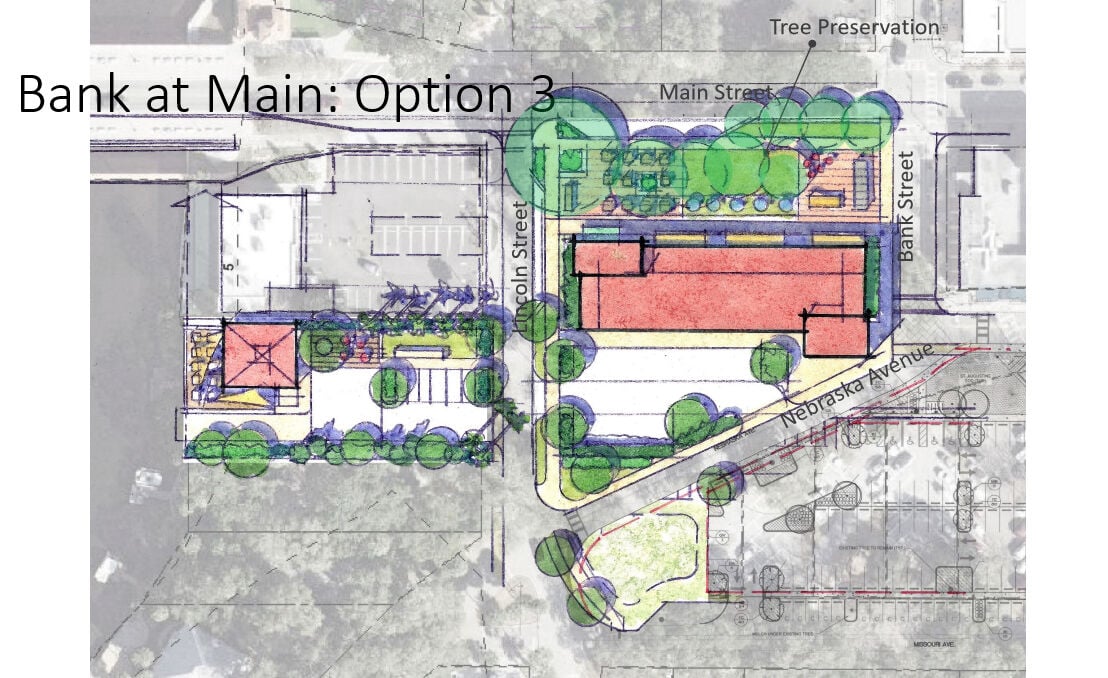 City staff presented the council with a proposed design during a Feb. 2 work session, more than a year after the city’s Community Redevelopment Agency approved hiring Kimley-Horn and Associates Inc. to draw up potential plans.

Keith Greminger, formerly with Kimley-Horn and now urban planning and design principal at Stantec, outlined the suggested design, which has received “a very good bid” of about $722,000, he said.

That recommended plan involved leaving the area’s current street layout as-is. Nebraska Avenue sits just south of Main Street and, throughout the majority of downtown, they run parallel, east-to-west, until both intersect with Bank Street. That’s when Nebraska turns into Lafayette Street and banks southwest before intersecting and continuing through Lincoln Street.

Three alternatives were provided, two of which explore straightening out Nebraska Avenue at Bank Street and extending it to Lincoln Street to create even more space for parking.

The design recommended by staff and presented by Greminger would increase the lot’s current capacity from 90 to about 106 spaces. As explained earlier in the work session by City Manager Debbie Manns, any selected design would include additional aesthetic and safety features “to help the city come into compliance under the terms of the Land Development Code with the parking standards and landscape standards.”

Preliminary studies suggest there would be an additional 35 parking spaces gained by straightening Nebraska, Greminger said. But it could come at a hefty price of potentially $800,000 when factoring in all associated costs.

“As an urban designer I would normally be a proponent of an idea like that, of cleaning up and straightening out a grid,” Greminger said. “But given the fact that it T-intersects with Lincoln and it’s right there at the river; I’m not sure there’s any real urban benefit to that.

“You’ve got a complete set of documents now that are permitted, bid with a great price,” he added. “As a professional, I would recommend that you move forward with that.”

Council members, however, were not completely done with the idea of exploring the reconfiguration of Nebraska, and also expressed interest in a third alternative design. That option doesn’t adjust Nebraska’s path but alters another aspect of the overall project — potential construction between Nebraska and Main Street and west of Lincoln Street, also privately owned.

A few entities own properties that make up the existing parking lot and surrounding area. The city owns the eastern portion of the parking lot and Pasco County owns an area to the west. Property south of Main Street, between Lincoln and Bank streets and across from the Hacienda Hotel, is owned by Grady Pridgen, of Pridgen Realty Inc. in St. Petersburg.

All design options include concepts for the development of property owned by Pridgen and property to the west of Lincoln Street to the Pithlachascotee River. The staff-recommended design and options 1 and 2 feature a structure that is right on Main Street between Lincoln and Bank streets. Option 3 shows a structure set back from Main Street, creating a landscaped pedestrian area on Main while still leaving room for additional parking to the south.

Since the city received a quality bid already, Councilman Peter Altman suggested that time is taken to hear from others involved in the process, as well as the Tampa Bay Regional Planning Council.

“My feeling is we see how long the bid is willing to hold and we try and find out what our stakeholders are going to do,” Altman said, adding that he’s been in discussions with Pridgen about the Main Street property. “Because spending money on public infrastructure is great. Getting private investment to come along with it is even better.”

Frank Starkey, president of People Places LLC in downtown New Port Richey and developer of The Central on Orange Lakes, also provided opinions to the council last week. Starkey, who preferred Option 3 with a set-back structure off Main Street, said he’d like to see a connection, or promenade, from the Cotee River that essentially connects pedestrians through to Railroad Square, which is the area of Nebraska and Grand Boulevard to the east of the parking lot.

“It’s a big gap from Bank (Street) to other side of bridge,” Starkey said. “Pedestrians are known to turn around and go back the other direction if they pass 50 feet of nothing. There’s got to be something really drawing them past that, and right now if you’re walking down Main Street and you get to Bank Street, you’re at the end of the world. You need something to really propel pedestrians to get to the bridge and then across the bridge.”