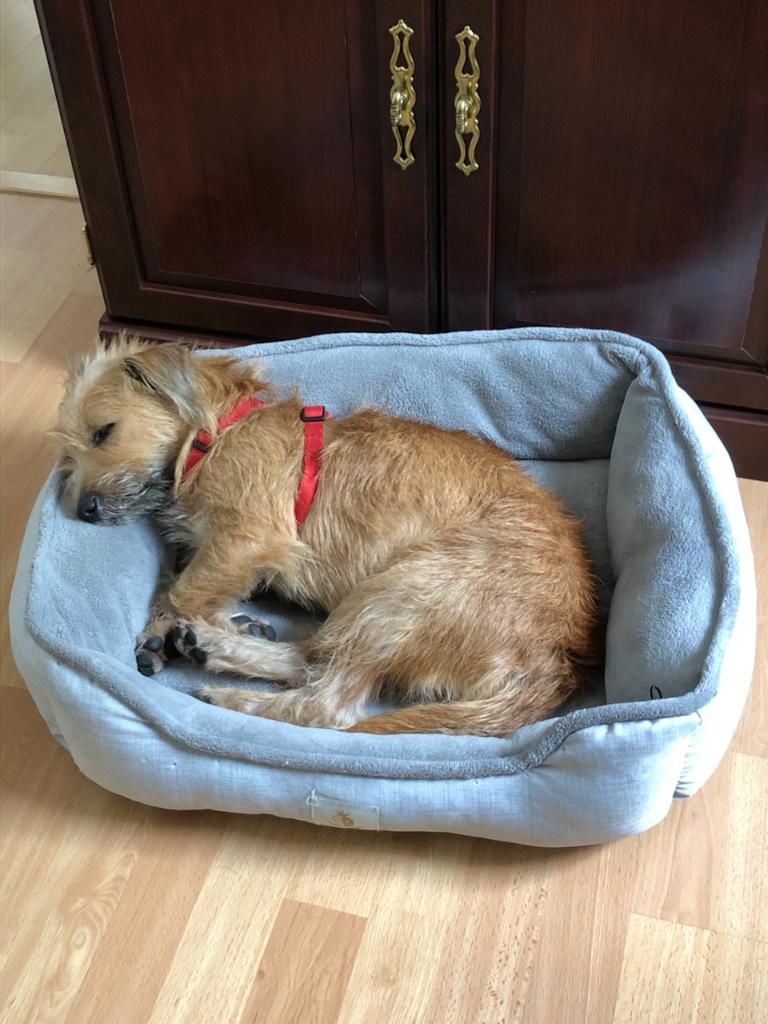 The red harness that Cairn terrier Goldie wears is a major part of the story of the dog’s escape and recovery. 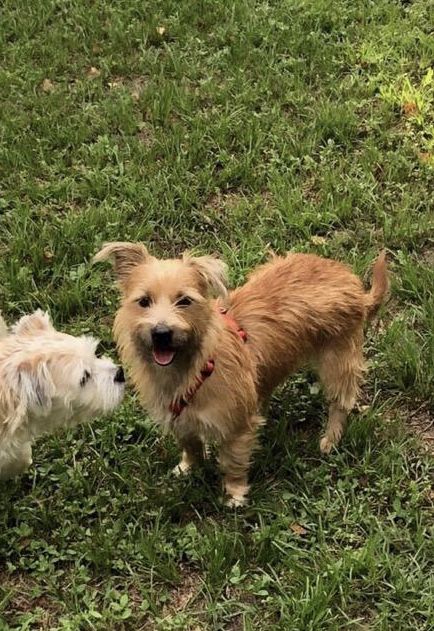 Goldie was adopted as a companion for Juniper, left. 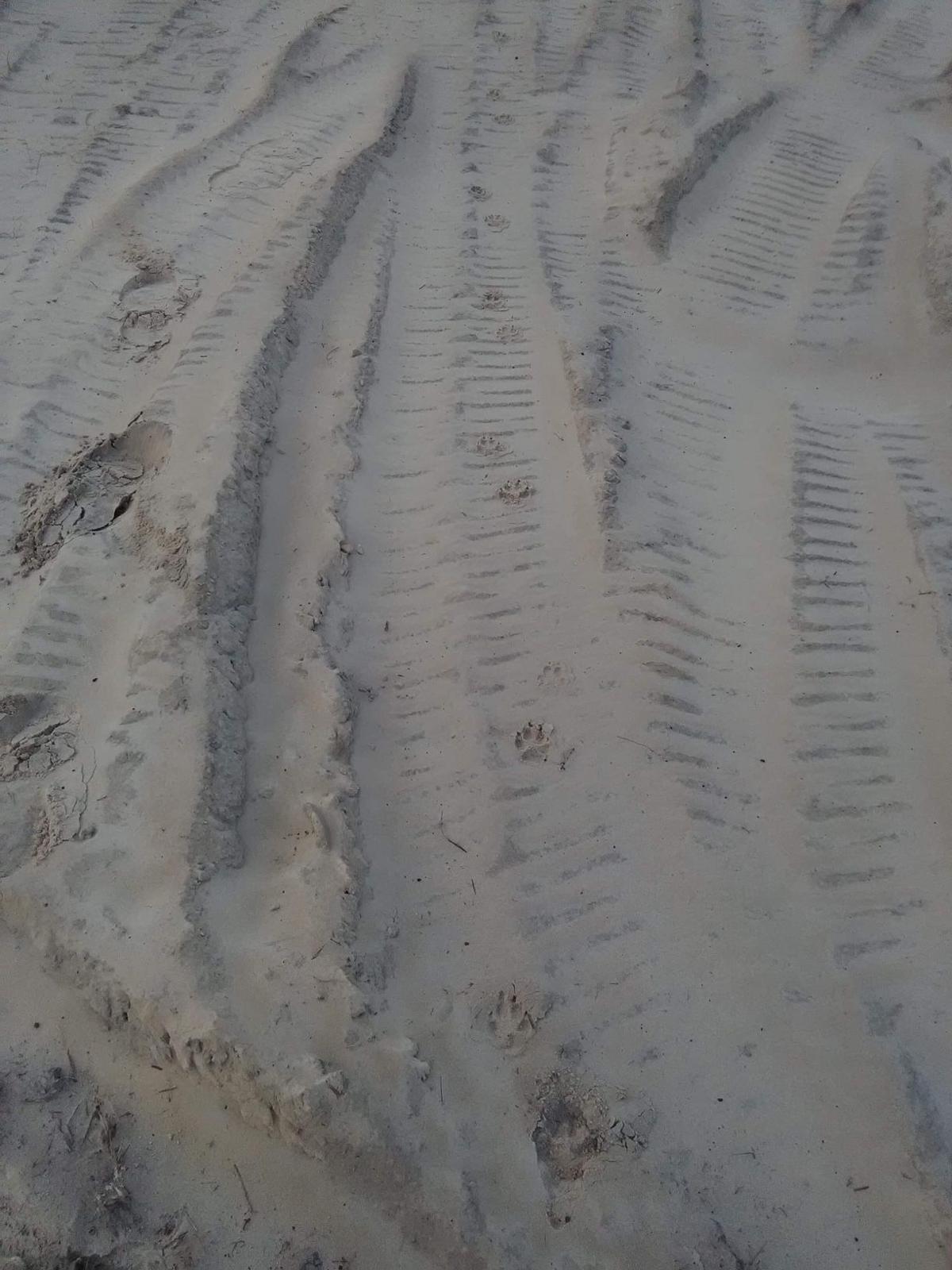 David Calise of Jimmy’s Angels Rescue in Spring Hill discovered Goldie’s tracks near a construction site. He set the trap and periodically checked for capture. Twenty-five days after she was reported missing, Goldie’s red harness was what David saw when he approached the trap after a dozen or so misses.

The red harness that Cairn terrier Goldie wears is a major part of the story of the dog’s escape and recovery.

Goldie was adopted as a companion for Juniper, left.

David Calise of Jimmy’s Angels Rescue in Spring Hill discovered Goldie’s tracks near a construction site. He set the trap and periodically checked for capture. Twenty-five days after she was reported missing, Goldie’s red harness was what David saw when he approached the trap after a dozen or so misses.

BROOKSVILLE — After just three days in her new home, little Goldie, a young rescued Cairn terrier, became the most sought after lost pup in Hernando County. And for nearly a month she avoided capture despite the community effort to bring her home safely.

In the end, her escape was no match for a local rescue with a successful trapping history, an owner who wasn’t giving up, and a social media frenzy that spread the word of her escape and eventually helped bring little Goldie home.

The adventure started on Aug.12, just two and a half days after settling into her new Spring Hill home. Goldie was a rescue from South Florida, explained Nancy Beltran-Schreiber, Goldie’s adoptive parent and a special needs educator at Weeki Wachee High School. She and her husband Paul had searched for that breed as a companion for their dog Juniper, also a Cairn terror.

“As we were putting out the recycle bins, Goldie walked out to the front yard,” Nancy said. She had displayed some apprehension while in the fenced backyard, why she was typically on a leash when outside. But Goldie had followed Juniper without being detected. Nancy was confident the fluffy pup would respond to coaxing, as she had done before in unfamiliar situations. “For about 30 minutes we sat outside on the street trying to lure Goldie back.”

But just before grabbing her by her little red harness, Goldie bolted, spooked by a passing car.

Nancy immediately took off after the skittish pup only to lose sight of her after about three blocks.

Goldie had been rescued by Destiny for Dogs from a hoarder case with 20 other dogs. So Nancy reached out to them immediately for guidance. And they, in turn, reached out to two local rescues who could help. Nancy then got busy plastering posters on every light post she could find and utilizing social media to alert the community.

“The next 25 days proved to be a whirlwind of sadness, hope, frustration, excitement and sleepless nights,” Nancy recalled.

But the community had her back.

Pam and David Calise of Jimmy’s Angels Rescue, a nonprofit group in Spring Hill, took the disappearance of Goldie to heart. David has extensive trapping skills and he jumped in immediately to assist.

When Pam was contacted to help locate Goldie, she and David jumped onboard. Pam went to social media. David brushed up on his tracking skills.

During her 25-day solo journey, Goldie had covered quite a bit of distance. There were false sightings and a few legitimate ones that helped David discover Goldie’s prints near a construction site by Countyline Road and Mariner Boulevard, roughly a mile from where she’d disappeared. And ultimately it was video footage from a Ring Video Doorbell that narrowed the search.

David set a trap and checked it regularly. And for days they prayed for a positive outcome. Hope was dissipating and all involved in the search were growing weary.

But on day 25, after Pam reached out to Facebook for a prayer chain, the miracle happened. David came up on the trap, his plan to show another trapper from out of town who’d been involved, so they could brainstorm a new strategy.

“As I got closer to the trap I saw a red harness,” David said. “And I knew we had her.”

“We couldn’t believe she had survived, crossing Mariner and Spring Hill Drive twice,” Pam said. She was also in an area heavily trafficked by coyotes.

Nancy was at work when Pam’s call came in. “I was half crying, half making sense, half not making sense,” Nancy remembered.

She called her husband who met the Calises at the veterinarian’s office where Goldie was being checked for trauma. Other than losing a little weight, and in need of a grooming, Goldie faired remarkably well during her 25 day jaunt.

It was an effort the community jumped on, supported and followed to its very happy ending.

“The hundreds of flyers posted, the phone calls, the skill, persistence and instinct of David Calise and Pam Calise ... resulted in trapping our pup safely,” Nancy posted on Facebook on Sept. 6. “This little 20-pound pup survived thunderstorms and coyotes and busy streets and intense heat…but she survived!”

Perhaps it was a little of everything that brought Goldie’s story to a happy ending. A dedicated animal community that notoriously jumps to assist when an animal goes missing. An active social media campaign that spread the word of her escape quickly and effectively. A few selfless rescues that share the common thread of saving abused and unwanted pets.

Jimmy’s Angels Rescue, named in tribute to Pam’s brother who passed too soon, takes long term dogs who have been forgotten. The dynamic of their not-for-profit makes funding difficult. With so many rescues pining for donations, those that rarely re-home are often the last to attract.

“We do it for the dogs,” said David, a recently retired former medical lab technician at Oak Hill Hospital. David now spends most of his days caring for six dogs in some level of extreme challenge.

But rescues need the public’s help to keep them afloat. Jimmy’s Angels is just one among many in Hernando County. Pam and Dave created the rescue five years ago, after losing two canines almost back to back from a rare cancer.

“They were all that was keeping me together after my brother Jimmy died unexpectedly,” Pam said. She was done. “I didn’t want any more dogs.”

Until she met Diesel, a mangy pit bull-Labrador mix the couple adopted when looking for a boxer. “I didn’t want him. I didn’t like him. I was mad at the world,” Pam remembered. And in turn, Diesel chewed everything she owned.

Seven years later, he’s still chewing. But he helped Pam reconnect with her love for dogs, particularly those who have been looked over because they are challenged.

Shortly after Diesel entered their lives, Pam and Dave decided to create Jimmy’s Angels. “I still wasn’t ok,” Pam remembered. “I guess I was hoping each dog we saved would put a piece of my heart back together.”

Nancy is indebted to Jimmy’s Angels as a huge part of bringing Goldie home. Without their dedication, the saga of Goldie might not be the happy ending the community prayed for.

Rescues like Jimmy’s Angels need your help in the form of donations, volunteers to walk the dogs, and support. Visit them on Facebook for more information.