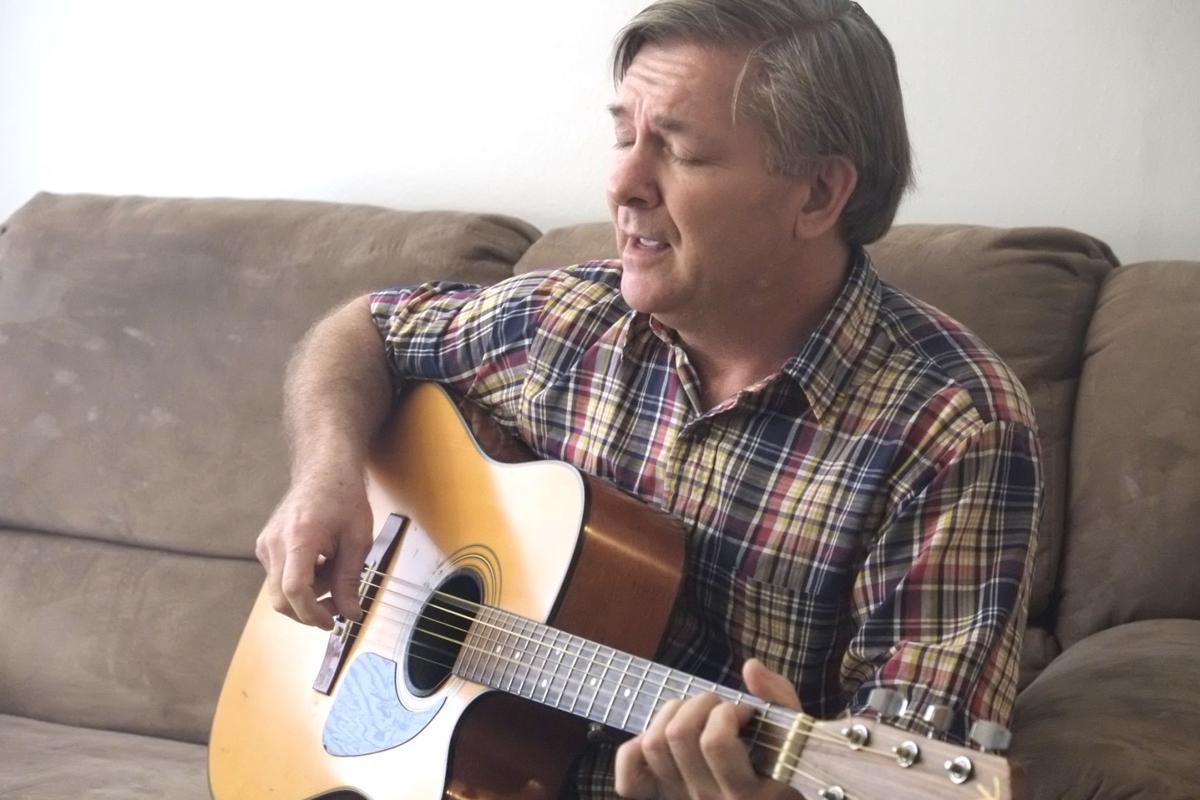 Kevin Glaser plays guitar and sings one of the songs he’s written at his small Port Richey apartment. A year earlier the engineer, inventor, author and actor was living homeless in the woods of Hudson. 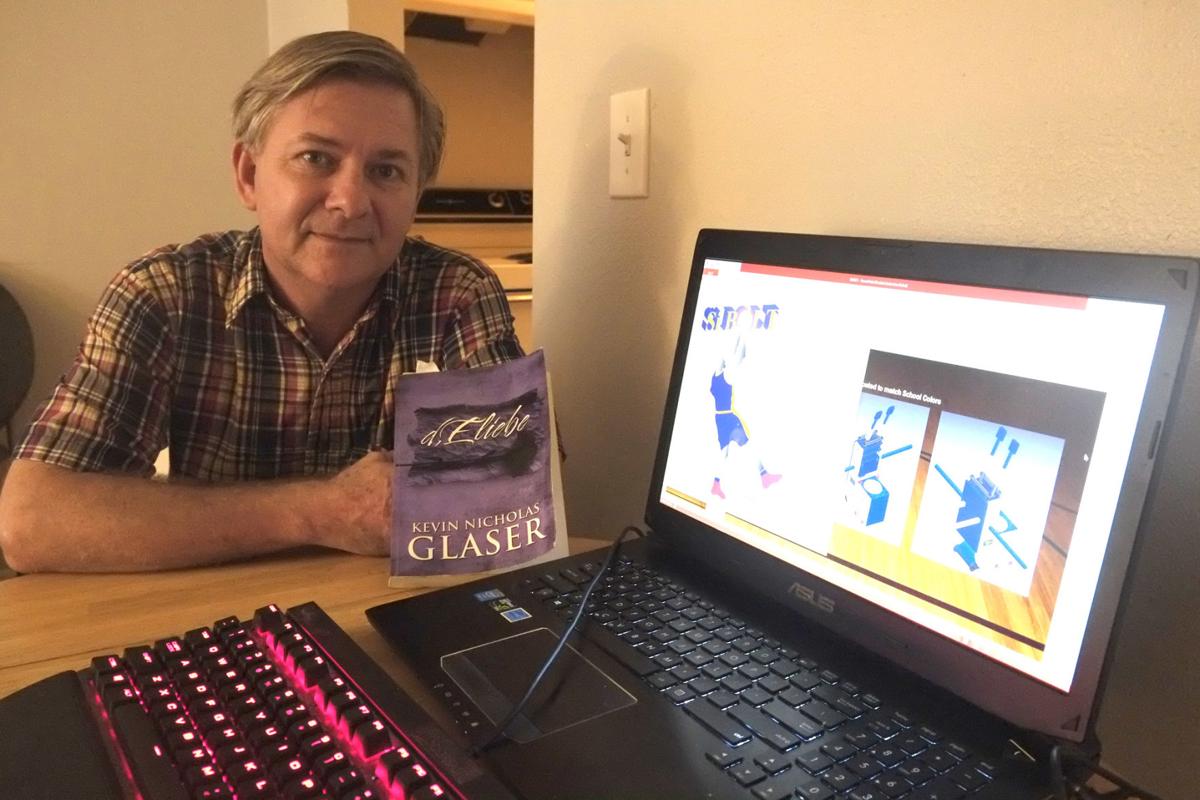 Kevin Glaser sits with a thriller he wrote and published. The laptop on the table is open to design drawings for a basketball training device he invented and hopes to market to high school, college and NBA teams.

Kevin Glaser plays guitar and sings one of the songs he’s written at his small Port Richey apartment. A year earlier the engineer, inventor, author and actor was living homeless in the woods of Hudson.

Kevin Glaser sits with a thriller he wrote and published. The laptop on the table is open to design drawings for a basketball training device he invented and hopes to market to high school, college and NBA teams.

HUDSON — Like the feather picked up by the winds of fate in the closing of the movie “Forrest Gump,” and like the uncertainty of what you’re going to get when you reach into a box of chocolates, you never know what life is going to deal you.

One thing is certain, though, and for Kevin Glaser sitting in his tiny one-bedroom apartment in Port Richey reflecting, life isn’t about what happens to you, but how you react to it.

Glaser, 57, recently merged back into the stream of life — literally emerging from the woods of Hudson, where he lived for a time, a tarp the only roof over his head. His worldly possessions, a guitar, a few pieces of clothing and a few other things, all fit into a push cart he’d made from a baby stroller.

“I was one of those homeless people you see,” he said. But “I wasn’t supposed to be.” His tale is one that begs telling and is perhaps a cautionary tale for those prone to judge books by their covers.

Glaser had been married, had kids and a good job as a design engineer at General Electric. He later divorced, his children became adults, and five years ago the amateur singer and songwriter packed up his guitar and a suitcase and set off on a scooter from Pennsylvania to Tampa for an audition for the television show “America’s Got Talent.” He made it to the second round of auditions in Orlando but wasn’t picked for the show.

Glaser, who was staying with someone in the area in exchange for doing remodeling work on their home, eventually put his twin Penn State engineering degrees to work to land a job inspecting bridges. His plan was to settle locally, get his own place and get back to work on an invention—a training device for basketball players to work on their fade-away jump shot—he was seeking to patent. A Tampa Bay-area attorney who saw the remodeling work Glaser had done asked if he would do some work for him, and the pair worked out a deal to exchange extensive remodeling work for legal work filing for a patent.

Glaser quit his job to begin.

Things were going along well until Glaser returned to Pennsylvania to pick up some things he’d left there. While on the road, he got a call Christmas day from the attorney, whose “life circumstances changed.”

“He said there was nothing for me to come back to (in Florida),” said Glaser, who was then stuck in Pennsylvania, with no job or place to stay. While there he got an email from “America’s Got Talent.”

Some things happen for a reason, he believes, and perhaps it was fate that while on this leg of his journey he came upon a house on fire, rescuing three people from the blaze.

“At least there was that,” he said. “If I hadn’t been in that situation at that time, I wouldn’t have been there.”

Glasser stayed with his mother in Pennsylvania, but he’d left his invention, a mobile robot that mimics a defender block for a basketball player’s jump shots, with a Florida manufacturer to prototype.

The manufacturer needed help with the now-patented device, so after 18 months in Pennsylvania Glaser returned to Florida. He had no income but had a place to stay in West Pasco. But the arrangement fell through, and Glaser found himself stuck with no money and no place to stay. It’s when he jumped the tracks, becoming one of Hudson’s homeless living in the woods.

He kept up spirits, told himself it was temporary. He bathed daily from a bucket “to be clean if I got called in for an interview” from one of the job applications he’d spread around town. He washed his clothes regularly in the same bucket to always be presentable.

“All I knew is I had to get a job, and you can’t go to job interview dirty and sweaty,” he said. A memory popped into his head as he spoke:

“When I was homeless, I remember having the best shower I ever had; it was under a downspout from a roof; I remember how amazing it felt to have the water running over me.”

It’s funny, he said. Life outside was rough, but there were moments.

“I enjoyed the sunrise every morning, the great weather and the air,” said Glaser. “I even enjoyed the rain; I had a tarp I could go under if it got too bad.”

But homelessness was not something one wants to get used to, he said.

Embarrassed and “ashamed” of his situation, Glaser didn’t want to reach out to friends or family in Pennsylvania, but eventually “got up the courage’ to contact his mother and sister. He went to the New Port Richey Public Library to use one of its public computers to message them. It was the day he realized — if not in his heart, in the eyes of society — he was a bum.

“I was worried about leaving my cart outside because I didn’t want anyone to steal it,” Glaser recalled.

A librarian agreed to let him roll it inside if he would park it out of the way. He sat at the computer and began the difficult task of explaining his circumstances in a message to his sister.

Before he was done typing, a woman who worked at the library told him he would have to remove the cart. The emotion of being in mid-message about his predicament, the sudden realization that he was “just another homeless person” whose entire life was stuffed into a shabby cart, overwhelmed him. It was “my rock-bottom” moment, he recalled.

“I got upset; I shouldn’t have, but I think I shouted and called her a heartless b… and left.”

Glaser didn’t get far before a New Port Richey police officer stopped him. Glaser’s outburst had been reported.

“I told him I never should have said that and apologized,” said Glaser. The cop let him go, warning him stay away from the library.

At his lowest point, the winds of fate shifted A convenience store clerk learned about Glaser’s plight from another homeless person, the former lead guitar player of a famous 1980s hair band that Glaser “used to jam with” in the woods.

The clerk referred Glaser to a Hudson woman willing to let him live under her carport. He stayed there for three months, and when tool and equipment retailer Harbor Freight called him in for an interview, he landed the job. It was just one day a week, and he had to ride a bike from Hudson to the New Port Richey get there, but it was a paying job.

Glaser then connected with Career Source Pasco-Hernando, a nonprofit support group that helped him find a better job — and then an even better one. He’s been working for a tool and die company as a temp for nine months now but expects to be hired on staff soon. He has stability, his own apartment and a car, and is back to focusing on “picking up where I left off.”

Just where did Glaser leave off? It turns out the homeless man that many people saw pushing a cart around the area had quite a story.

Now, he has the first parts for his basketball invention and hopes to have a working prototype in six months. He’s rewriting the book he published years ago after winning back the publishing rights now that the original publisher is out of business. It’s a fiction-thriller, and he’s half-way done with a screenplay based upon it.

He continues to write songs, hopes to perform on stage and keeps in practice playing for people wherever he can, including Green Key Beach on weekends. He’s an experienced cinematographer and may get involved in movies again. He’s spent time on the other end of the lens, as well, playing the lead in an independent film titled “Sherlock Holmes,” and the role of father to a vampire daughter in another movie. He’s been an extra in several wide releases, including the first “Avengers” movie (a guy in a tuxedo running) and the Denzel Washington thriller “Unstoppable.”

Glaser admits there’s a lot on his plate.

“I look at myself as a gardener,” he said. “I plant seeds, feed and water them and see what grows.”

Down the way in his apartment complex a neighbor is helping build a prototype of a board game Glaser created in the book he wrote.

“It’s a couple’s game,” he said. In the book, the game is described as popular in France before WWI broke out, but afterward fell out of fashion. It involves partners tossing rings that land on pictures, the player then obligated to discuss something intimate with their partner that relates to the image. He thinks he could make a version that succeeds in the market.

Who, indeed? Glaser knows he doesn’t. He’s learned the only certainty in life is the uncertainty of it.

But while life’s updrafts and cross-currents may steer us like feathers in the wind, he says if one stays hopeful and positive, and is ready when opportunities present themselves, “there’s always a way forward — even through the worst things that happen to us.”

Florida Department of Health reported the second-highest one-day count of COVID-19 cases in Pasco County on Friday, adding 229 to bring the total to 3,539. The death toll stands at 27.