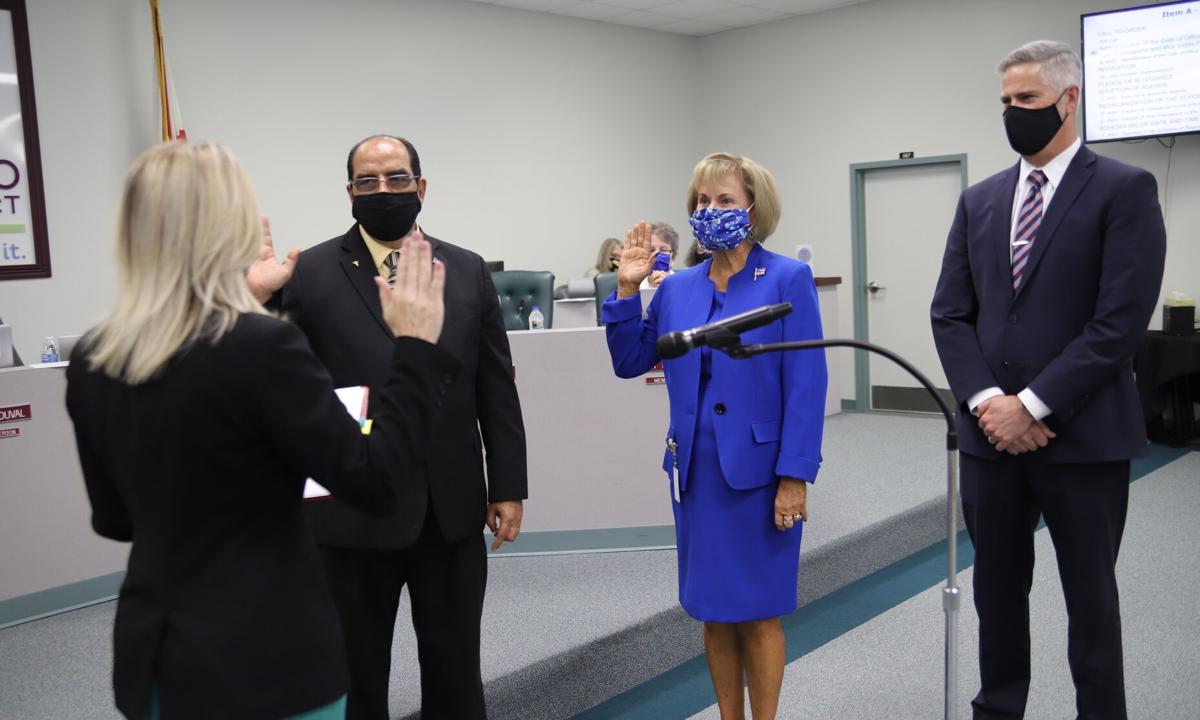 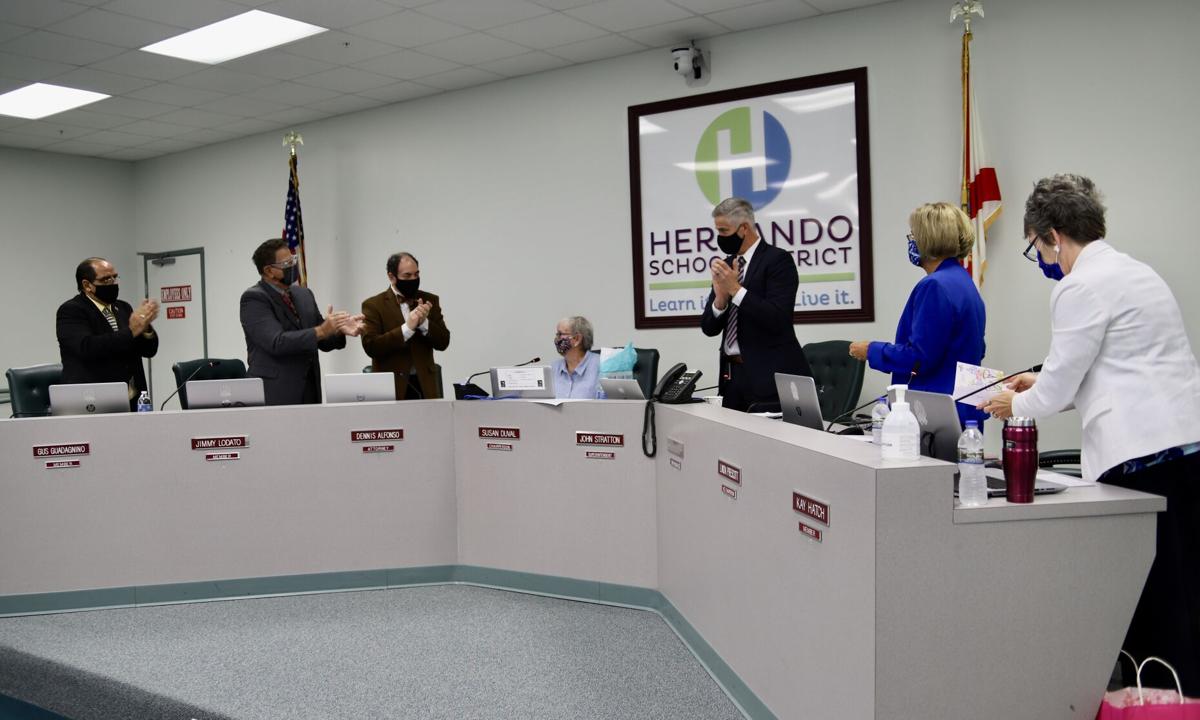 The Hernando School Board celebrated Susan Duval’s last day as school board chair.

The Hernando School Board celebrated Susan Duval’s last day as school board chair.

BROOKSVILLE — The Hernando Board of County Commissioners and the Hernando School Board welcomed new and reelected officials at their regular meetings on Nov. 17.

The newly elected officers serving on the County Commission are Chairman John Allocco, Vice Chairman Steve Champion and Second Vice Chairman Jeff Holcomb. They will serve in the offices for one year, Fiscal Year 2020/21.

Commissioners representing districts 1, 3 and 5 were also sworn in at the meeting that took place at the Hernando County Government Center. They and have been elected for four-year terms. Commissioners Wayne Dukes (Dist.2) and Jeff Holcomb (Dist. 4) will be up for re-election in 2022.

Commissioner Elizabeth Narverud (Dist. 1) is a newly elected commissioner serving her first term. Narverud has been a Hernando County resident since 1987 where she and her husband Marty raised their three children. Narverud previously served on the Hernando County School Board from 2014 to 2018.

Allocco (Dist. 3) is a reelected commissioner serving his second four-year term. He has been a resident of Hernando County since 1999, where he is the owner and rehab director of Fyzical Therapy and Balance Center in Spring Hill. Allocco and his wife have two adult children, two school-aged daughters and several grandchildren.

Champion (Dist. 5) is a reelected commissioner also serving his second four-year term. A fifth-generation Brooksville/Hernando County resident, Champion owns two businesses in Brooksville – firearm sales and military police supplies. Champion has five children, a son serving as a sergeant in the U.S. Marine Corps, a daughter preparing to graduate from the University of Central Florida with a bachelor’s degree, and three school-age children.

The Board of County Commissioners is the chief legislative body in the county that approves the county budget, adopts local ordinances and resolutions and establishes policies which govern Hernando County and ensure the health, safety and welfare of the citizens.

The Hernando School Board welcomed Judge Kristie M. Healis to swear in reelected members Gus Guadagnino and Linda Prescott, along with Superintendent John Stratton, whose contract was renewed in September.

Susan Duval, who served as the school board chair from 2018 to 2020, was recognized by the board for “her integrity, dedication and willingness to make difficult decisions,” according to a press release.

Duval has been a Hernando County resident since 1969, and she has worked at Hernando High School, Powell Middle School, Central High School and F.W. Springstead High School. She began teaching at Brooksville Junior High School, later transitioning to work in administration.

“It has been an honor to serve alongside you,” Stratton said. “There is no person more committed to our school district. It shows in everything you do. I could not have had a better partner.”

Duval added, “It’s amazing what can follow along when you enjoy what you’re doing. It becomes part of who you are and that’s where I am. The school district and I have been friends for a long time.”