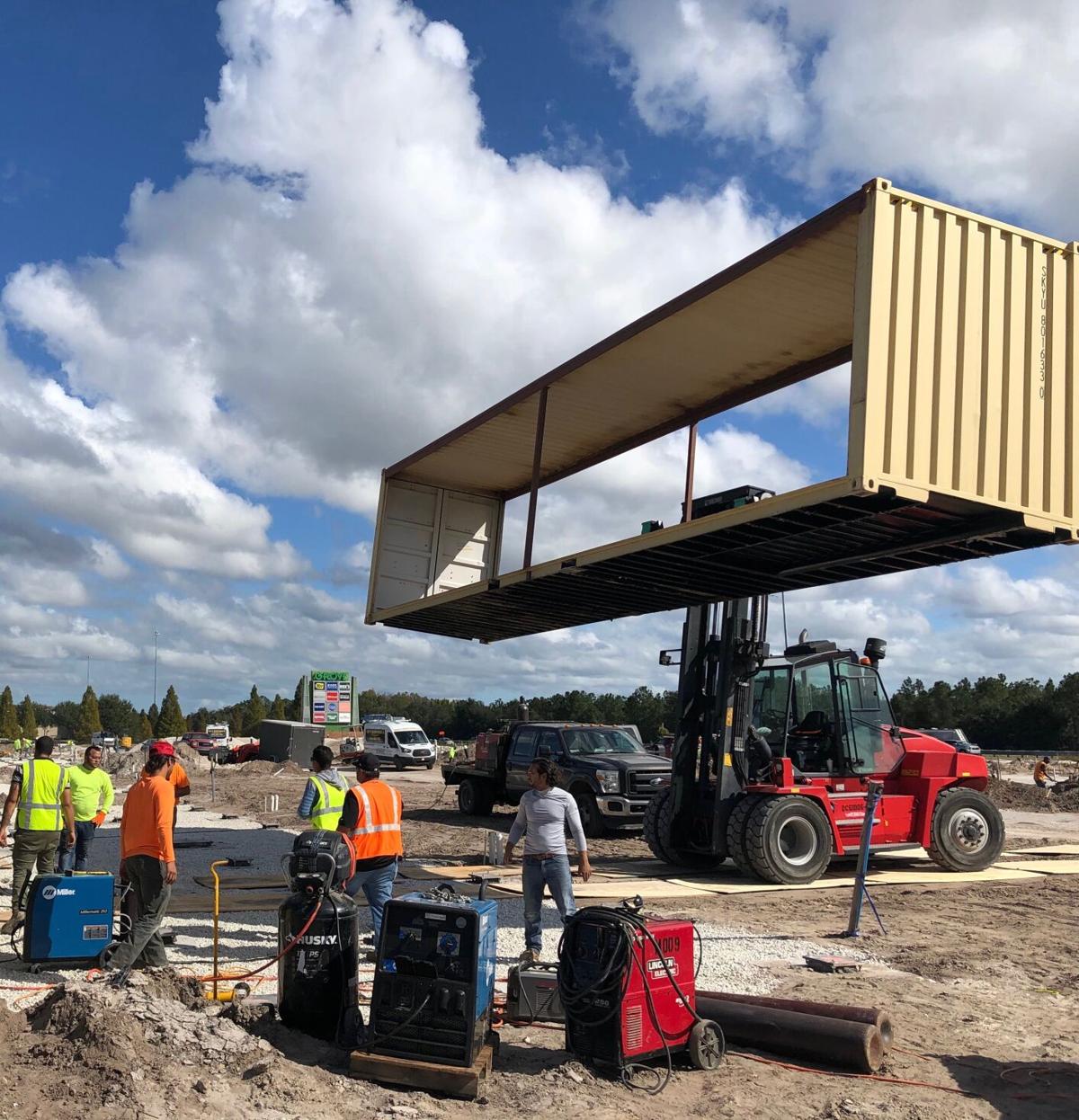 The first shipping containers that will create the restaurant and retail park KRATE at the Grove arrived on site this week. 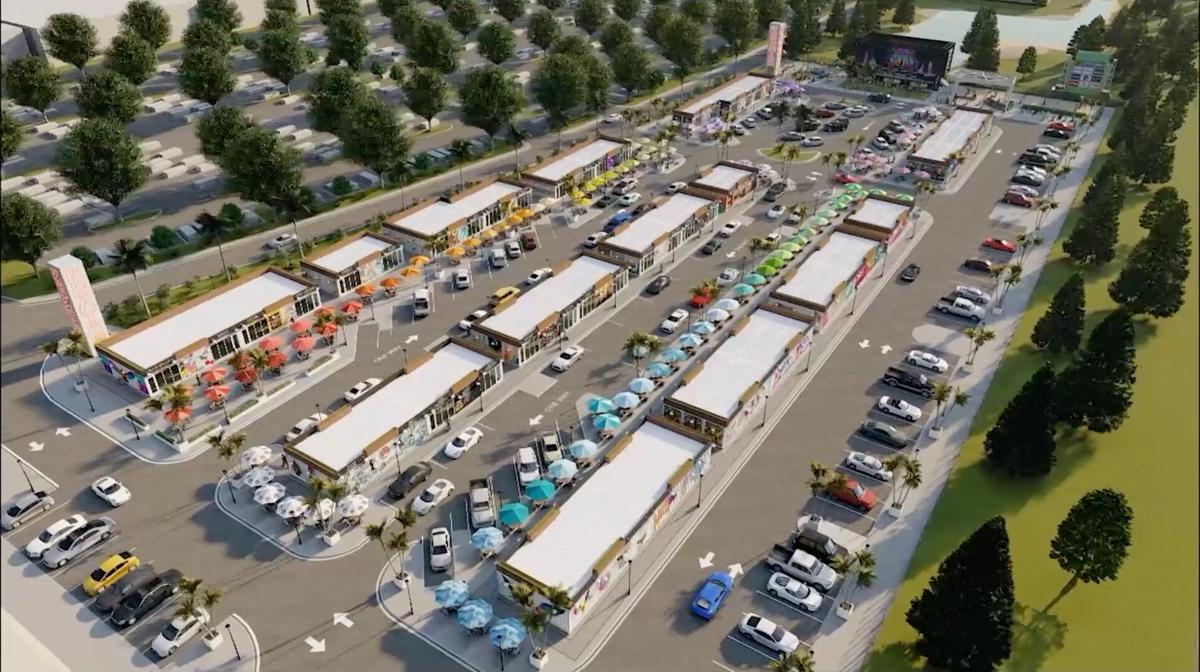 An artist's rendering of what KRATE, a shipping container park featuring restaurants and retail stores, will look like once finished at the end of the year or early 2021.

The first shipping containers that will create the restaurant and retail park KRATE at the Grove arrived on site this week.

An artist's rendering of what KRATE, a shipping container park featuring restaurants and retail stores, will look like once finished at the end of the year or early 2021.

WESLEY CHAPEL – The arrival of the first shipping containers came this week. Heavy machinery set down the sturdy metal frames at their future home, the Grove shopping plaza in Wesley Chapel.

More commonly seen at shipping yards – filled with goods and waiting to be craned onto freighters for sea travel – these containers await a much different future. An expected 94 of the rectangular, steel structures will eventually be transformed into restaurants and retail businesses to create KRATE, an outdoor container park.

"There is nothing like this in the world,” Mark Gold said in a press release. Gold is a partner in Wesley Chapel-based Mishorim Gold Properties, which purchased the Grove for around $64 million in September 2019. MGold Properties invested more than $110 million into the renovation of the property, which includes "a movie theater of the future," a miniature golf course and a water park. “KRATE is receiving attention across the globe for its unique concept and offerings. We will become the ultimate shopping and entertainment destination not just for Wesley Chapel, but for the region and around the world."

Refurbishing shipping containers into storefronts and restaurants is a concept that's grown in popularity in recent years. Sparkman Wharf in Tampa's Channel District features containers and Las Vegas opened its Downtown Container Park in 2013. Containers are also being utilized to create housing.

KRATE will begin with 17 containers, which will be home to nine businesses. Many of the restaurants and shops will be created with multiple containers, as final plans call for the use of 94 containers to construct 55 units. The split between restaurant and retail space is expected to be 70 percent and 30 percent, respectively.

The press release states that the first set of pods will be occupied by tenants offering dishes and items like Asian noodles, Puerto Rican fare, desserts and charcuterie boards. Attracting a diverse, worldly mix of businesses is a priority for KRATE. Cuisine from South America and Europe will be expected to find homes at the Grove.

In addition to the restaurant and retail aspects, KRATE will feature a stage with daily live entertainment, a dog park and a playground. Local muralists have been commissioned to create Instagrammable wall art, the press release states. Shoppers, diners and guests will find outdoor seating, string lights and speakers throughout the property.

"All touches that contribute to a sense of community," the release states.

MGold Properties has signed on 75 new tenants since purchasing the Grove. When KRATE opens, the 250-acre property will feature more than 50 restaurants. Treble Makers, a dueling piano bar, and Double Branch Artisanal Ales brewery are already in operation.

MGold Properties is investing heavily in Pasco County. The company also acquired the Holiday Mall on U.S. Highway 19 in West Pasco for $8.56 million this summer with the intent to revitalize the property and surrounding area.

Like all restaurant and retail businesses, those at the Grove are working to keep patrons safe as COVID-19 infection rates climb in Pasco County. Gold installed UV lights in all air conditioning to cut down on the spread of germs and viruses. The same technology will be installed in each KRATE's containers.

According to the U.S. Food and Drug Administration website, ultraviolet-C radiation "is a known disinfectant for air, water, and nonporous surfaces" and "has effectively been used for decades to reduce the spread of bacteria, such as tuberculosis."

"UVC radiation has been shown to destroy the outer protein coating of the SARS-Coronavirus, which is a different virus from the current SARS-CoV-2 virus," the website continues. "The destruction ultimately leads to inactivation of the virus."

Once the COVID-19 pandemic comes to an end, Gold stated that he intends to keep the UV lighting in the future.

"The goal is to keep this technology even beyond this pandemic to ensure a clean and safe environment, especially for those suffering from allergies and during cold and flu season," the release states.